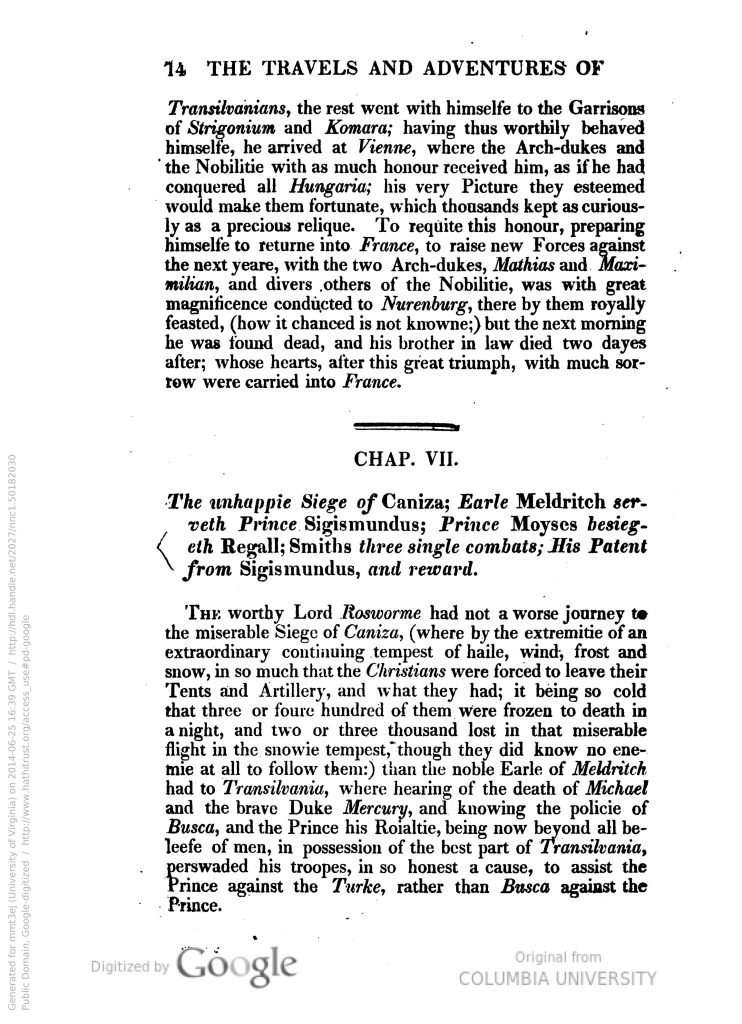 The worthy Lord Rosworme had not a worse journey to the miserable Siege of Caniza, (where by the extremitie of an extraordinary continuing tempest of haile, wind, frost and snow, in so much that the Christians were forced to leave their Tents and Artillery, and what they had; it being so cold that three or foure hundred of them were frozen to death in a night, and two or three thousand lost in that miserable flight in the snowie tempest, though they did know no enemie at all to follow them:) than the noble Earle of Meldritch had to Transilvania, where hearing of the death of Michael and the brave Duke Mercury, and knowing the policie of Busca, and the Prince his Roialtie, being now beyond all beleefe of men, in possession of the best part of Transilvania, perswaded his troopes, in so honest a cause, to assist the Prince against the Turke, rather than Busca against the Prince. 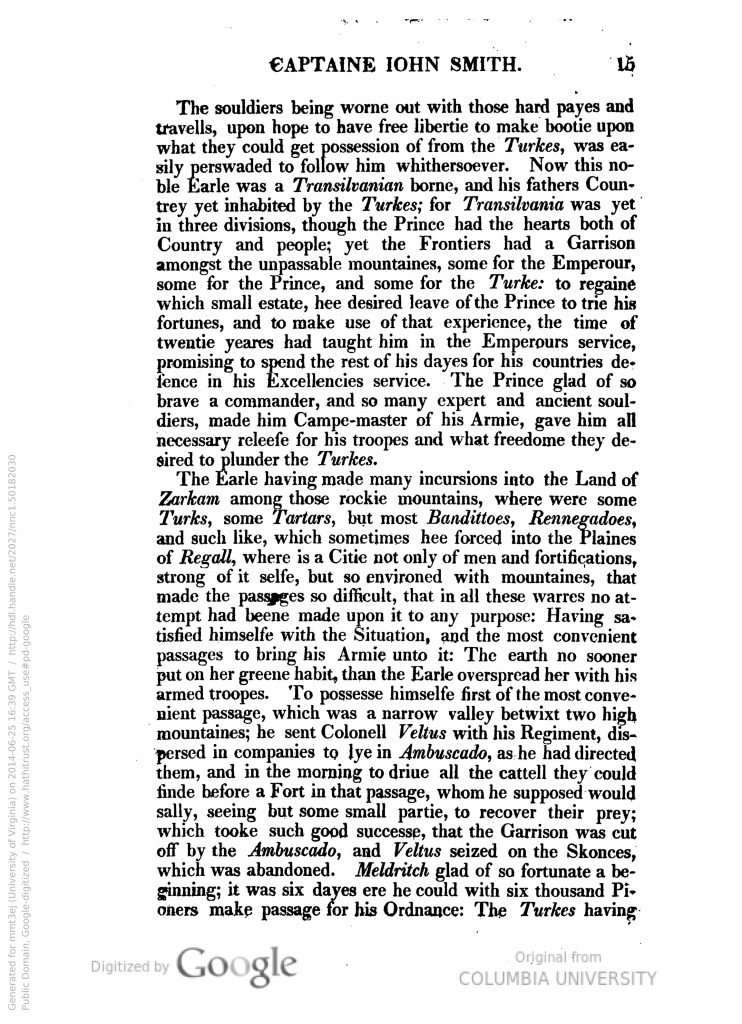 The souldiers being worne out with those hard payes and travells, upon hope to have free libertie to make bootie upon what they could get possession of from the Turkes, was easily perswaded to follow him whithersoever. Now this noble Earle was a Transilvanian borne, and his fathers Countrey yet inhabited by the Turkes; for Transilvania was yet in three divisions, though the Prince had the hearts both of Country and people; yet the Frontiers had a Garrison amongst the unpassable mountaines, some for the Emperour, some for the Prince, and some for the Turke: to regaine which small estate, hee desired leave of the Prince to trie his fortunes, and to make use of that experience, the time of twentie yeares had taught him in the Emperours service, promising to spend the rest of his dayes for his countries defence in his Excellencies service. The Prince glad of so brave a commander, and so many expert and ancient souldiers, made him Campe-master of his Armie, gave him all necessary releefe for his troopes and what freedome they desired to plunder the Turkes.

The Earle having made many incursions into the Land of Zarkam among those rockie mountains, where were some Turks, some Tartars, but most Bandittoes, Rennegadoes, and such like, which sometimes hee forced into the Plaines of Regall, where is a Citie not only of men and fortifications, strong of it selfe, but so environed with mountaines, that made the passages so difficult, that in all these warres no attempt had beene made upon it to any purpose: Having satisfied himselfe with the Situation, and the most convenient passages to bring his Armie unto it: The earth no sooner put on her greene habit, than the Earle overspread her with his armed troopes. To possesse himselfe first of the most convenient passage, which was a narrow valley betwixt two high mountaines; he sent Colonell Veltus with his Regiment, dispersed in companies to lye in Ambuscado, as he had directed them, and in the morning to driue all the cattell they could finde before a Fort in that passage, whom he supposed would sally, seeing but some small partie, to recover their prey; which tooke such good successe, that the Garrison was cut off by the Ambuscado, and Veltus seized on the Skonces, which was abandoned. Meldritch glad of so fortunate a beginning; it was six dayes ere he could with six thousand Pioners make passage for his Ordinance: The Turkes having 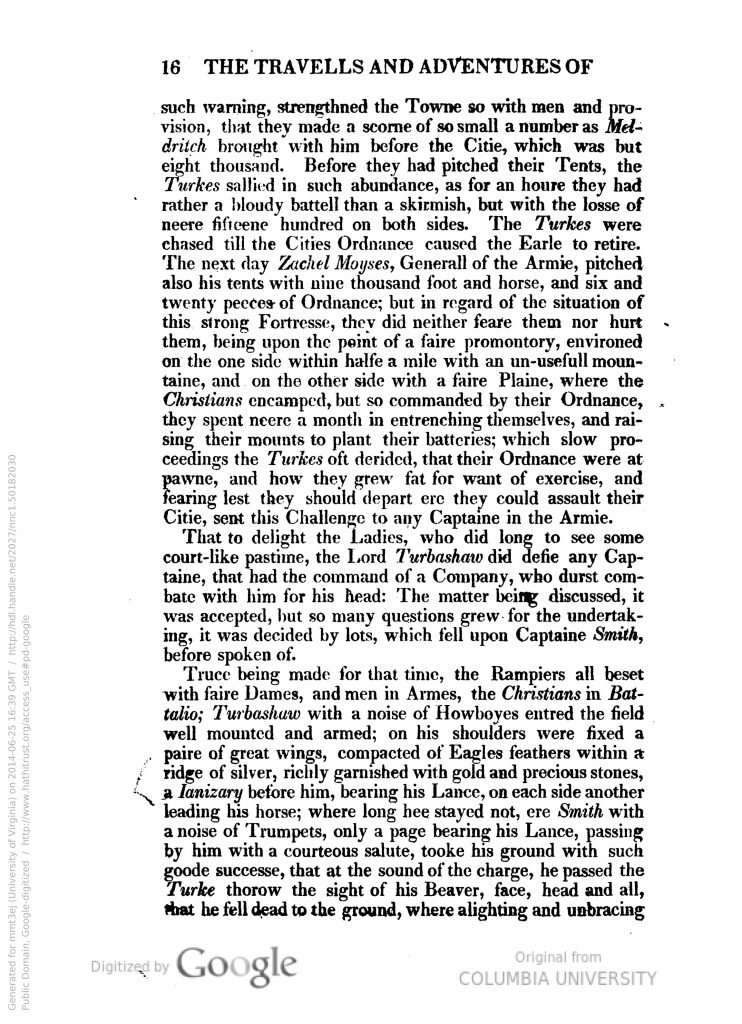 such warning, strengthned the Towne so with men and provision, that they made a scorne of so small a number as Meldritch brought with him before the Citie, which was but eight thousand. Before they had pitched their Tents, the Turkes sallied in such abundance, as for an houre they had raher a bloudy battell than a skirmish, but with the losse of neere fifteene hundred on both sides. The Turkes were chased till the Cities Ordnance caused the Earle to retire. The next day Zachel Moyses, Generall of the Armie, pitched also his tents with nine thousand foot and horse, and six and twenty peeces of Ordnance; but in regard of the situation of this strong Fortresse, they did neither feare them nor hurt them, being upon the point of a faire promontory, environed on the one side within halfe a mile with an un-usefull mountaine, and on the other side with a faire Plaine, where the Christians encamped, but so commanded by their Ordnance, they spent neere a month in entrenching themselves, and raising their mounts to plant their batteries; which slow proceedings the Turkes oft derided, that their Ordnance were at pawne, and how they grew fat for want of exercise, and fearing lest they should depart ere they could assault their Citie, sent this Challenge to any Captaine in the Armie.

That to delight the Ladies, who did long to see some court-like pastime, the Lord Turbashaw did defie any Captaine, that had the command of a Company, who durst combate with him for his head: The matter being discussed, it was accepted, but so many questions grew for the undertaking, it was decided by lots, which fell upon Captaine Smith, before spoken of.

Truce being made for that time, the Rampiers all beset with faire Dames, and men in Armes, the Christians in Battalio;Turbashaw with a noise of Howboyes entred the field well mounted and armed; on his shoulders were fixed a paire of great wings, compacted of Eagles feathers within a ridge of silver, richly garnished with gold and precious stones, a Ianizary before him, bearing his Lance, on each side another leading his horse; where long hee stayed not, ere Smith with a noise of Trumpets, only a page bearing his Lance, passing by him with a courteous salute, tooke his ground with such goode successe, that at the sound of the charge, he passed the Turke thorow the sight of his Beaver, face, head and all, that he fell dead to the ground, where alighting and unbracing 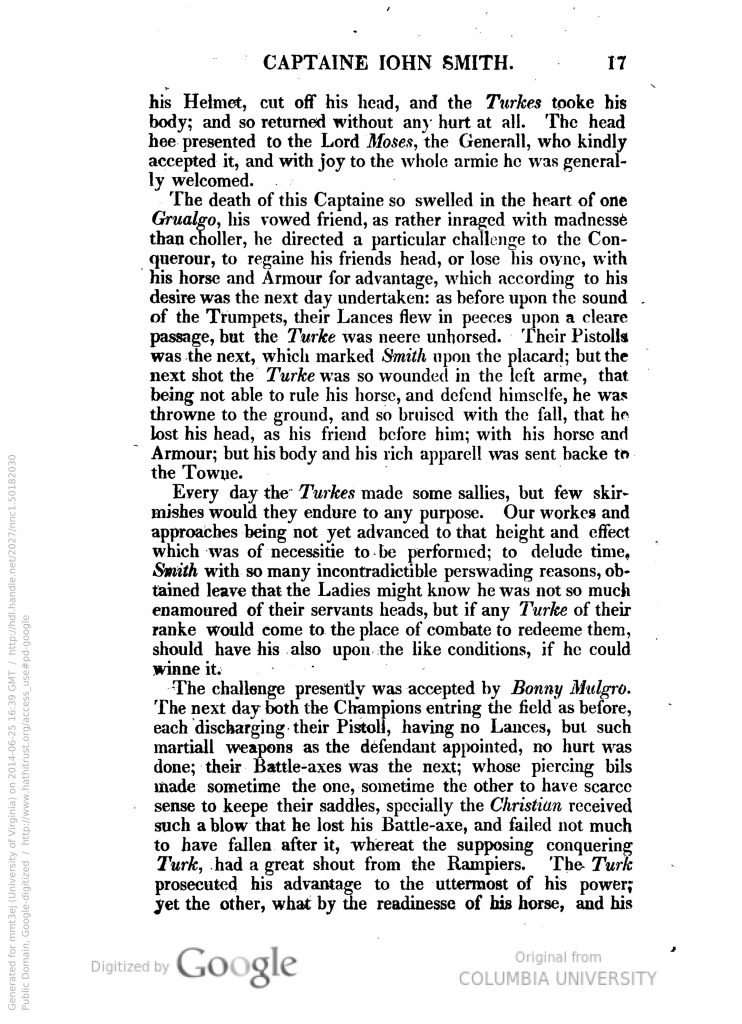 his Helmet, cut off his head, and the Turkes tooke his body; and so returned without any hurt at all. The head hee presented to the Lord Moses, the Generall, who kindly accepted it, and with joy to the whole armie he was generally welcomed.

The death of this Captaine so swelled in the heart of one Grualgo, his vowed friend, as rather inraged with madnesse than choller, he directed a particular challenge to the Conqueror, to regaine his friends head, or lose his owne, with his horse and Armour for advantage, which according to his desire was the next day undertaken: as before upon the sound of the Trumpets, their Lances flew in peeces upon a cleare passage, but the Turke was neere unhorsed. Their Pistolls was the next, which marked Smith upon the placard; but the next shot the Turke was so wounded in the left arme, that being not able to rule his horse, and defend himselfe, he was throwne to the ground, and so bruised with the fall, that he lost his head, as his friend before him; with his horse and Armour; but his body and his rich apparell was sent backe to the Towne.

Every day the Turkes made some sallies, but few skirmishes would they endure to any purpose. Our workes and approaches being not yet advanced to that height and effect which was of necessitie to be performed; to delude time, Smith with so many incontradictible perswading reasons, obtained leave that the Ladies might know he was not so much enamoured of their servants heads, but if any Turke of their ranke would come to the place of combate to redeeme them, should have his also upon the like conditions, if he could winne it.

The challenge presently was accepted by Bonny Mulgro. The next day both the Champions entring the field as before, each discharging their Pistoll, having no Lances, but such martiall weapons as the defendant appointed, no hurt was done; their Battle-axes was the next; whose piercing bils made sometime the one, sometime the other to have scarce sense to keepe their saddles, specially the Christian received such a blow that he lost his Battle-axe, and failed not much to have fallen after it, whereat supposing conquering Turk, had a great shout from the Rampiers. The Turk prosecuted his advantage to the uttermost of his power; yet the other, what by the readinesse of his horse, and his 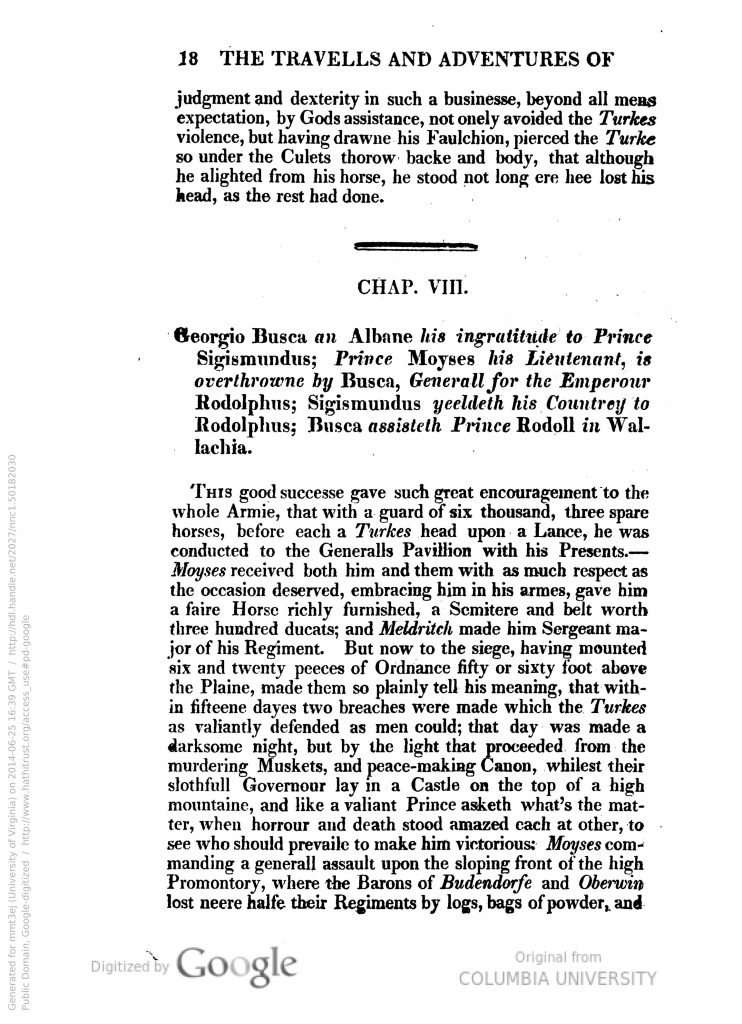 judgment and dexterity in such a businesse, beyond all mens expectation, by Gods assistance, not onely avoided the Turkes violence, but having drawne his Faulchion, pierced the Turke so under the Culets thorow backe and body, that although he alighted from his horse, he stood not long ere hee lost his head, as the rest had done.