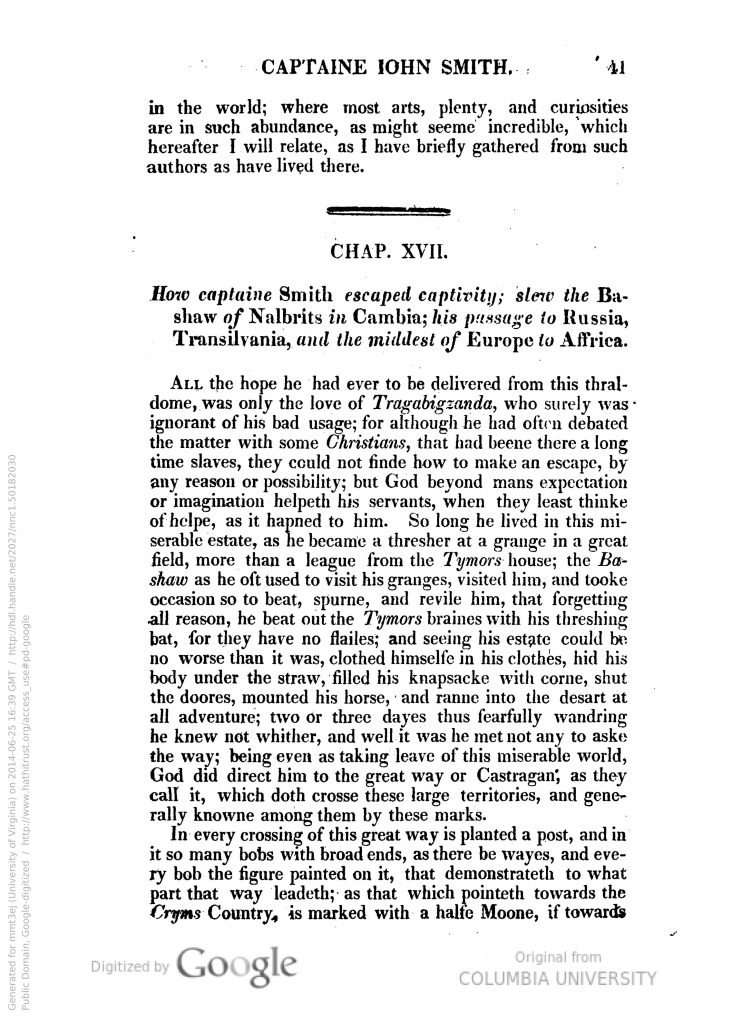 How captaine Smith escaped captivity; slew the Bashaw of Nalbrits in Cambia; his passage to Russia, Transilvania, and the middest of Europe to Affrica.

All the hope he had ever to be delivered from this thraldome, was only the love of Tragabigzanda, who surely was ignorant of his bad usage; for although he had often debated the matter with some Christians, that had beene there a long time slaves, they could not finde how to make an escape, by any reason or possibility; but God beyond mans expectation or imagination helpeth his servants, when they least thinke of helpe, as it hapned to him. So long he lived in this miserable estate, as he became a thresher at a grange in a great field, more than a league from the Tymors house; the Bashaw as he oft used to visit his granges, visited him, and tooke occasion so to beat, spurne, and revile him, that forgetting all reason, he beat out the Tymors braines with his threshing bat, for they have no flailes; and seeing his estate could be no worse than it was, clothed himselfe in his clothes, hid his body under the straw, filled his knapsacke with corne, shut the doores, mounted his horse, and ranne into the desart at all adventure; two or three dayes thus fearfully wandring he knew not whither, and well it was he met not any to aske the way; being even as taking leave of this miserable world, God did direct him to the great way or Castragan, as they call it, which doth crosse these large territories, and generally knowne among them by these marks.

In every crossing of this great way is planted a post, and in it so many bobs with broad ends, as there be wayes, and every bob the figure painted on it, that demonstrateth to what part that way leadeth; as that which pointeth towards the Cryms Country, is marked with a halfe Moone, if towards 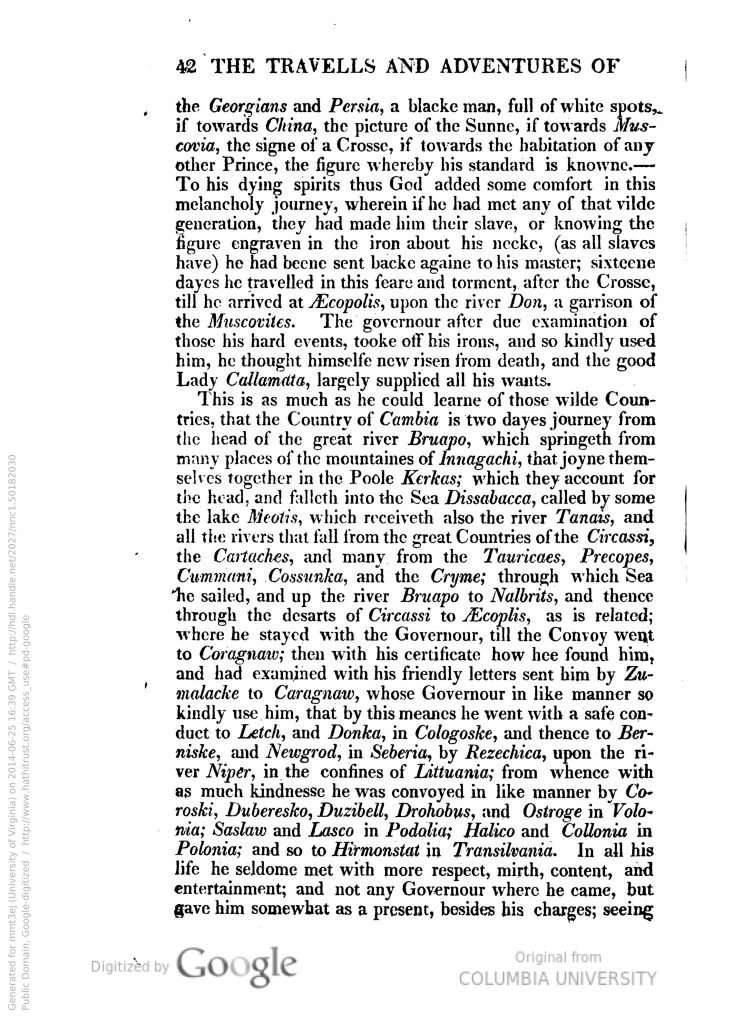 the Georgians and Persia, a blacke man, full of white spots, if towards China, the picture of the Sunne, if towards Muscovia, the signe of a Cross, if towards the habitation of any other Prince, the figure whereby his standard is knowne.—To his dying spirits thus God added some comfort in this melancholy journey, wherein if he had met any of that vilde generation, they had made him their slave, or knowing the figure engraven in the iron about his necke, (as all slaves have) he had beene sent backe againe to his master; sixteene dayes he travelled in this feare and torment, after the Crosse, till he arrived at Æcopolis, upon the river Don, a garrison of the Muscovites. The governour after due examination of those his hard events, tooke off his irons, and so kindly used him, he thought himselfe new risen from death, and the good Lady Callamata, largely supplied all his wants.

This is as much as he could learne of those wilde Countries, that the Country of Cambia is two dayes journey from the head of the great river Bruapo, which springeth from many places of the mountaines of Innagachi; that joyne themselves together in the Poole Kerkas; which they account for the head, and falleth into the sea Dissabacca, called by some the lake Meotis, which receiveth also the river Tanais, and all the rivers that fall from the great Countries of the Circassi, the Cartaches, and many from the Tauricaes, Precopes, Cummani, Cossunka, and the Cryme; through which Sea he sailed, and up the river Bruapo to Nalbrits, and thence through the desarts of Circassi to Æcoplis, as is related; where he stayed with the Governour, till the Convoy went to Coragnaw; then with his certificate how hee found him, and had examined with his friendly letters sent him by Zumalacke to Caragnaw, whose Governour in like manner so kindly use him, that by this meanes he went with a safe conduct to Letch, and Donka, in Cologoske, and thence to Berniske, and Newgrod, in Seberia, by Rezechica, upon the river Niper, in the confines of Littuania; from whence with as much kindnesse he was conveyed in like manner by Coroski, Duberesko, Duzibell, Drohobus, and Ostroge in Volonia; Saslaw and Lasco in Podolia; Halico and Collonia in Polonia; and so to Hirmonstat in Transilvania. In all his life he seldome met with more respect, mirth, content, and entertainment; and not any Governour where he came, but gave him somewhat as a present, besides his charges; seeing 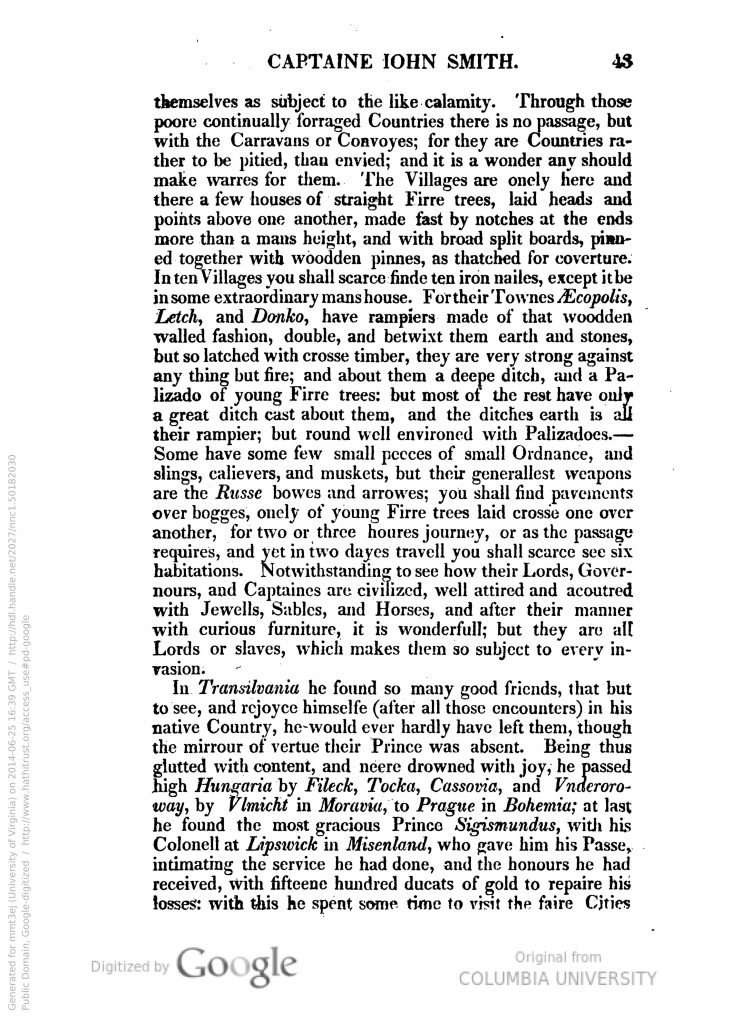 themselves as subject to like calamity. Through those poore countinually forraged Countries there is no passage, but with the Carravans or Convoyes; for they are Countries rather to be pitied, than envied; and it is a wonder any should make warres for them. The Villages are onely here and there a few houses of straight Firre trees, laid heads and points above one another, made fast by notches at the ends more than a mans height, and with broad split boards, pinned together with woodden pinnes, as thatched for coveture. In ten Villages you shall scarce finde ten iron nailes, except it be in some extraordinary mans house. For their Townes Æcopolis, Letch, and Donko, have rampiers made of that woodden walled fashion, double, and betwixt them earth and stones, but so latched with crosse timber, they are very strong against any thing but fire; and about them a deepe ditch, and a Palizado of young Firre trees: but most of the rest have only a great ditch cast about them, and the ditches earth is all their rampier; but round well environed with Palizadoes.—Some have some few small peeces of small Ordnance, and slings, calievers, and muskets, but their generallest weapons are the Russe bowes and arrowes; you shall find pavements over bogges, onely of young Firre trees laide crosse one over another, for two or three houres journey, or as the passage requires, and yet in two dayes travell you shall scarce see six habitations. Notwithstanding to see how their Lords, Governours, and Captaines are civilized, well attired and acoutred with Jewells, Sables, and Horses, and after their manner with curious furniture, it is wonderfull; but they are all Lords or slaves, which makes them so subject to every invasion.

In Transilvania he found so many good friends, that but to see, and rejoyce himselfe (after all those encounters) in his native Country, he would ever hardly have left them, though the mirrour of vertue their Prince was absent. Being thus glutted with content, and neere drowned with joy, he passed high Hungaria by Fileck, Tocka, Cassovia, and Vnderoroway, by Vlmicht in Moravia, to Prague in Bohemia; at last he found the most gracious Prince Sigismundus, with his Colonell at Lipswick in Misenland, who gave him his Passe, intimating the service he had done, and the honours he had received, with fifteene hundred ducats of gold to repaire his losses: with this he spent some time to visit the faire Cities 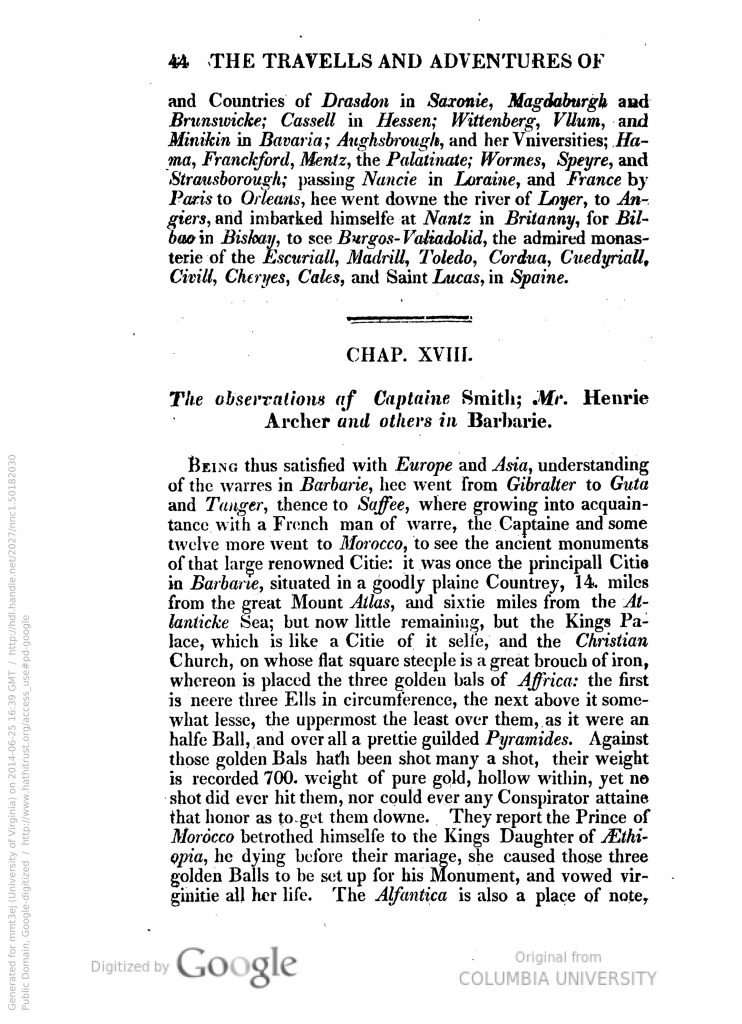 and Countries of Drasdon in Saxonie, Magdaburgh and Brunswicke; Cassell in Hessen; Wittenberg, Vllum, and Minikin in Bavaria; Aughsbrough, and her Vniversities; Hama, Franckford, Mentz, the Palatinate; Wormes, Speyre, and Strausborough; passing Nancie in Loraine, and France by Paris to Orleans, hee went downe the river of Loyer, to Angiers, and imbarked himselfe at Nantz in Britanny, for Bilbao in Biskay, to see Burgos-Valiadolid, the admired monasterie of the Escuriall, Madrill, Toledo, Cordua, Cuedyriall, Civill, Cheryes, Cales, and Saint Lucas, in Spaine.