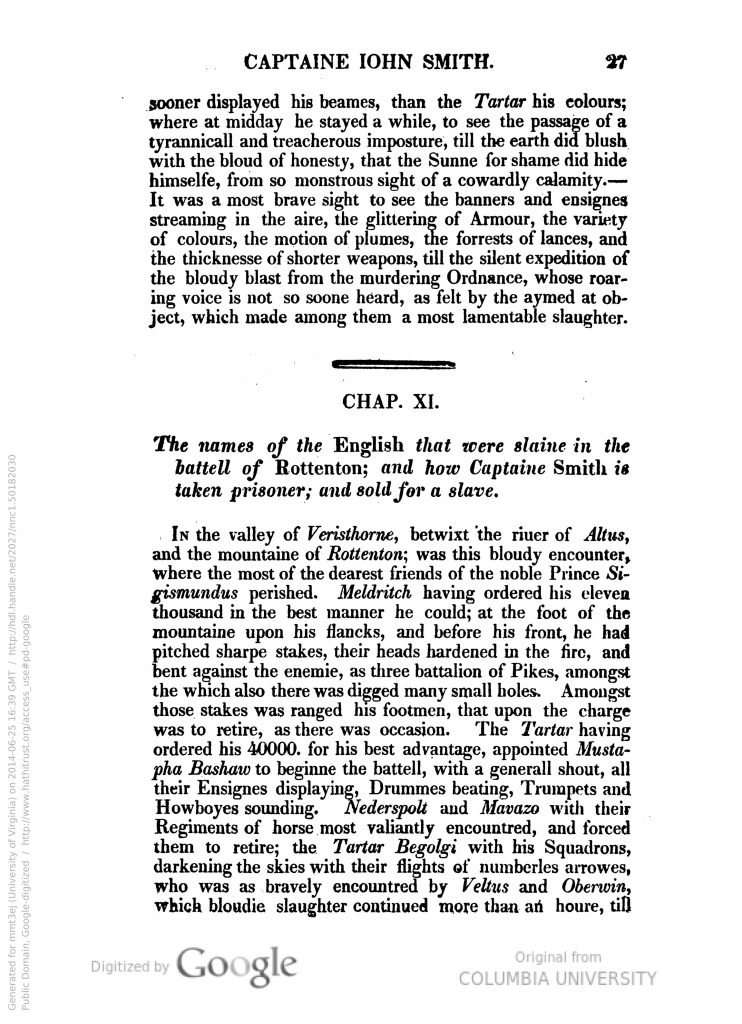 The names of the English that were slaine in the battell of Rottenton; and how Captaine Smith is taken prisoner; and sold for a slave.

In the valley of Veristhorne, betwixt the riuer of Altus, and the mountaine of Rottenton; was this bloudy encounter, where the most of the dearest friends of the noble Prince Sigismundus perished. Meldritch having ordered his eleven thousand in the best manner he could; at the foot of the mountaine upon the flancks, and before his front, he had pitched sharpe stakes, their heads hardened in the fire, and bent against the enemie, as three battalions of Pikes, amongst the which also there was digged many small holes. Amongst those stakes was ranged his footmen, that upon the charge was to retire, as there was occasion. The Tartar having ordered his 40000. for his best advantage, appointed Mustapha Bashaw to beginne the battell, with a generall shout, all their Ensignes displaying, Drummes beating, Trumpets and Howboyes sounding. Nederspolt and Mavazo with their Regiments of horse most valiantly encountred, and forced them to retire; the Tartar Begolgi with his Squadrons, darkening the skies with their flights of numberles arrowes, who was as bravely encountred by Veltus and Oberwin, which bloudie slaughter continued more than an houre, till 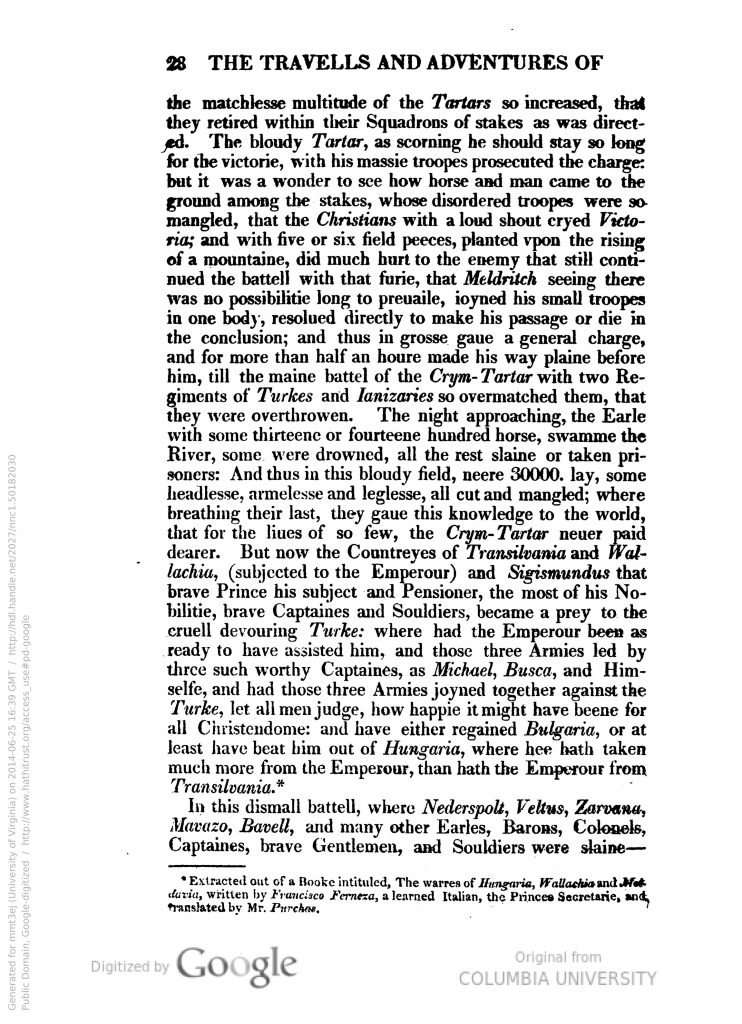 the matchlesse multitude of the Tartars so increased, that they retired within their Squadrons of stakes as was directed. The bloudy Tartar, as scorning he should stay so long for the victorie, with his massie troopes prosecuted the charge: but it was a wonder to see how horse and man came to the ground among the stakes, whose disordered troopes were so mangled, that the Christians with a loud shout cryed Victoria; and with five or six field peeces, planted vpon the rising of a mountaine, did much hurt to the enemy that still continued the battell with that furie, that Meldritch seeing there was no possibilitie long to preuaile; ioyned his small troopes in one body; resolued directly to make his passage or die in the conclusion; and thus in grosse gaue a general charge, and for more than half an houre made his way plaine before him, till the maine battel of the Crym-Tartar with two Regiments of Turkes and Ianizaries so overmatched them, that they were overthrowen. The night approaching, the Earle with some thirteene or fourteene hundred horse, swamme the River, some were drowned, all the rest slaine or taken prisoners: And thus in this bloudy field, neere 30000. lay, some headlesse, armlesse and leglesse, all cut and mangled; where breathing their last, they gaue this knowledge to the world, that for the liues of so few, the Crym-Tartar neuer paid dearer. But now the Countreyes of Transilvania and Wallachia (subjected to the Emperour) and Sigismundus that brave Prince his subject and Pensioner, the most of his Nobilitie, brave Captaines and Souldiers, became a prey to the cruell devouring Turke: where had the Emperour been as ready to have assisted him, and those three Armies led by three such worthy Captaines, as Michael, Busca, and Himselfe, and had those three Armies joyned together against the Turke, let all men judge, how happie it might have beene for all Christendome: and have either regained Bulgaria, or at least have beat him out of Hungaria, where hee hath taken much more from the Emperour, than hath the Emperour from Transilvania. 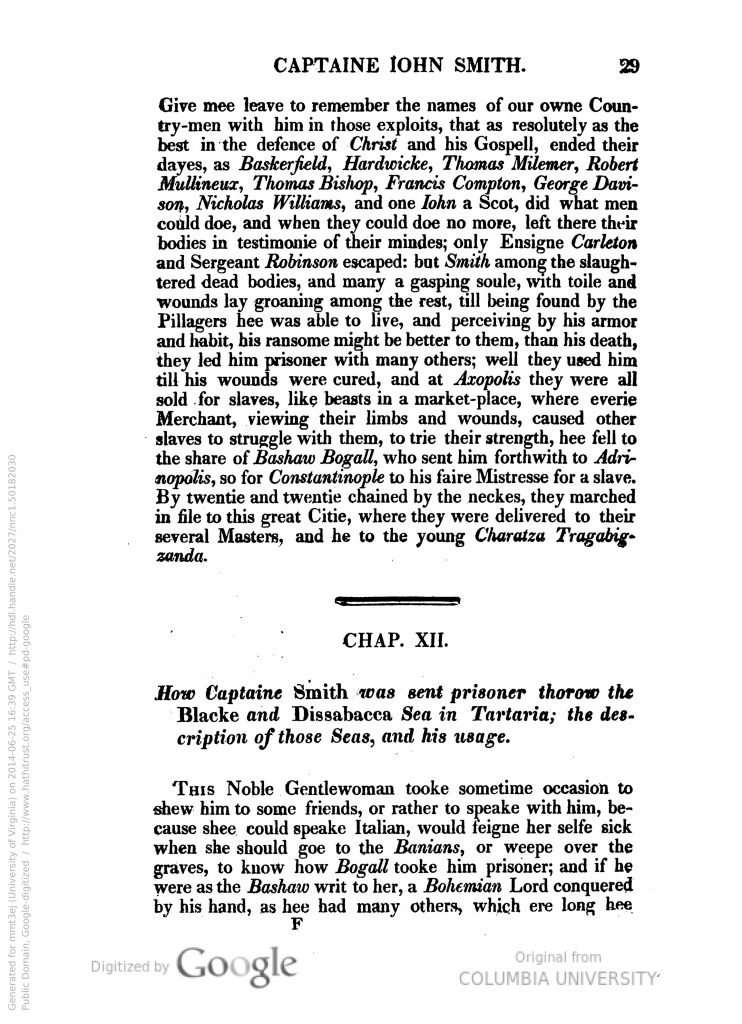 Give mee leave to remember the names of our owne Country-men with him in those exploits, that as resolutely as the best in the defence of Christ and his Gospell, ended their dayes, as Baskerfield, Hardwicke, Thomas Milemer, Robert Mullineux, Thomas Bishop, Francis Compton, George Davison, Nicholas Williams, and one Iohn a Scot, did what men could doe, and when they could doe no more, left there their bodies in testimonie of their mindes; only Ensigne Carleton and Sergeant Robinson escaped: but Smith among the slaughtered dead bodies, and many a gasping soule, with toile and wounds lay groaning among the rest, till being found by the Pillagers hee was able to live, and perceiving by his armor and habit, his ransome might be better to them, than his death, they led him prisoner with many others; well they used him till his wounds were cured, and at Axopolis they were all sold for slaves, like beasts in a market-place, where everie Merchant, viewing their limbs and wombs, caused other slaves to struggle with them, to trie their strength, hee fell to the share of Bashaw Bogall, who sent him forthwith to Adrinopolis, so for Constantinople to his faire Mistresse for a slave. By twentie and twentie chained by the neckes, they marched in file to this great Citie, where they were delivred to their several Masters, and he to the young Charatza Tragabigzanda.

How Captaine Smith was sent prisoner thorow the Black and Dissabacca Sea in Tartaria; the description of those Seas, and his usage.

This Noble Gentlewoman tooke sometime occasion to shew him to some friends, or rather to speake with him, because shee could speake Italian, would feigne her selfe sick when she should goe to the Banians, or weepe over the graves, to know how Bogall took him prisoner; and if he were as the Bashaw writ to her, a Bohemian Lord conquererd by his hand, as hee had many others, which ere long hee 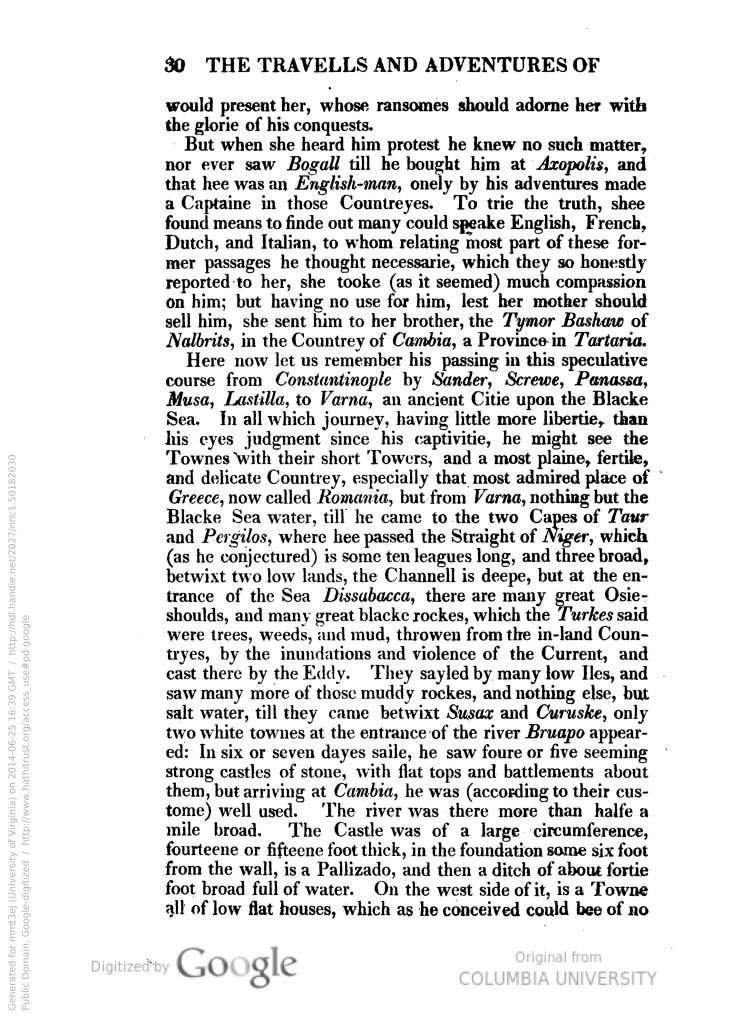 would present her, whose ransomes should adorne her with the glorie of his conquests.

But when she heard him protest he knew no such matter, nor ever saw Bogall till he bought him at Axopolis, and that hee was an English-man, onely by his adventures made a Captaine in those Countreyes. To trie the truth, shee found means to finde out many could speake English, French, Dutch, and Italian, to whom relating most part of these former passages he thought necessarie, which they so honestly reported to her, she tooke (as it seemed) much compassion on him; but having no use for him, lest her mother should sell him, she sent him to her brother, the Tymor Bashaw of Nalbrits, in the Countrey of Cambia, a Province in Tartaria.

Here now let us remember his passing in this speculative course from Constantinople by Sander, Screwe, Panassa, Musa, Lastilla, to Varna, an ancient Citie upon the Blacke Sea. In all which journey, having little more libertie, than his eyes judgment since his captivitie, he might see the Townes with their short Towers, and a most plaine, fertile, and delicate Countrey, especially that most admired place of Greece, now called Romania, but from Varna, nothing but the Blacke Sea water, till he came to the two Capes of Taur and Pergilos, where hee passed the Straight of Niger, which (as he conjectured) is some ten leagues long, and three broad, betwixt two low lands, the Channell is deepe, but at the entrance of the Sea Dissabacca, there are many great Osieshoulds, and many great blacke rockes, which the Turkes said were trees, weeds, and mud, throwen from the in-land Countryes, by the inundations and violence of the Current, and cast there by the Eddy. They sayled by many low Iles, and saw many more of those muddy rockes, and nothing else, but salt water, till they came betwixt Susar and Curuske, only two white townes at the entrance of the river Bruapo appared: In six or seven dayes saile, he saw foure or five seeming strong castles of stone, with flat tops and battlements about them, but arriving at Cambia, he was (according to their custome) well used. The river was there more than halfe a mile broad. The Castle was of a large circumference, fourteene or fifteene foot thick, in the foundation some six foot from the wall, is a Pallizado, and then a ditch of about fortie foot broad full of water. On the west side of it, is a Towne all of low flat houses, which as he conceived could bee of no 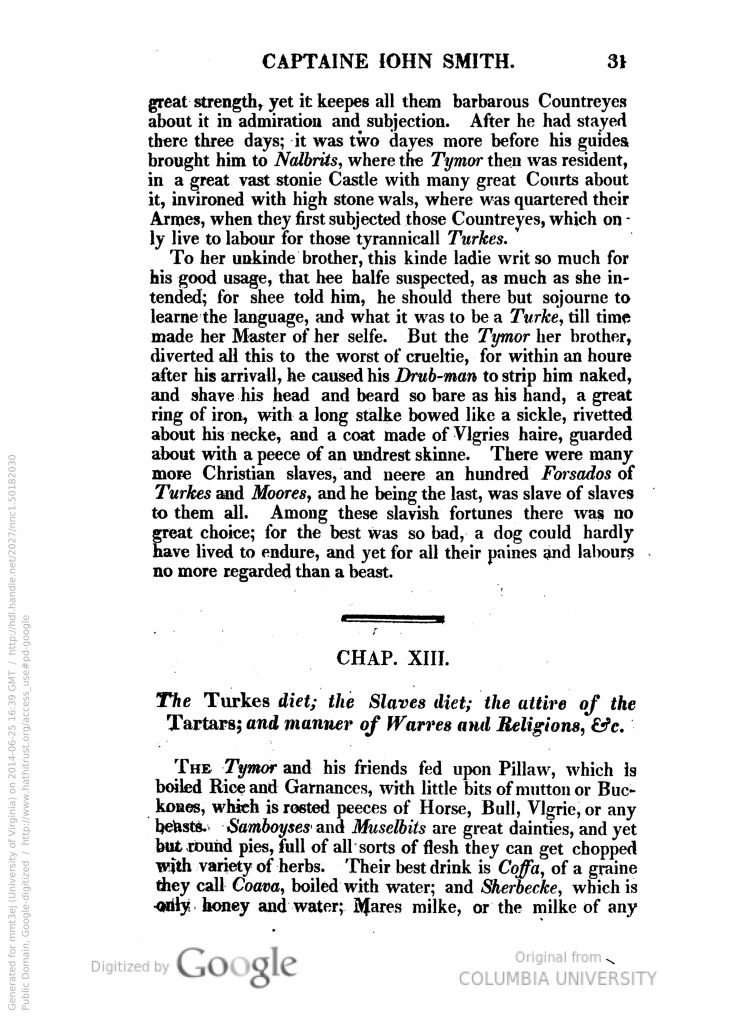 great strength, yet it keepes all them barbarous Countreyes about it in admiration and subjection. After he had stayed there three days; it was two dayes more before his guides brought him to Nalbrits, where the Tymor then was resident, in a great vast stonie Castle with many great Courts about it, invironed with high stone wals, where was quartered their Armes, when they first subjected those Countreyes, which only live to labour for those tyrannicall Turkes.

To her unkinde brother, this kind ladie writ so much for his good usage, that hee halfe suspected, as much as she intended; for shee told him, he should there but sojourne to learne the language, and what it was to be a Turke, till time made her Master of her selfe. But the Tymor her brother, diverted all this to the worst of crueltie, for within an houre after his arrivall, he caused his Drub-man to strip him naked, and shave his head and beard so bare as his hand, a great ring of iron, with a long stalke bowed like a sickle, rivetted about his necke, and a coat made of Vlgries haire, guarded about with a peece of an undrest skinne. There were many more Christian slaves, and neere an hundred Forsados of Turkes and Moores, and he being the last, was slave of slaves to them all. Among these slavish fortunes there was no great choice; for the best was so bad, a dog could hardly have lived to endure, and yet for all their paines and labours no more regarded than a beast.