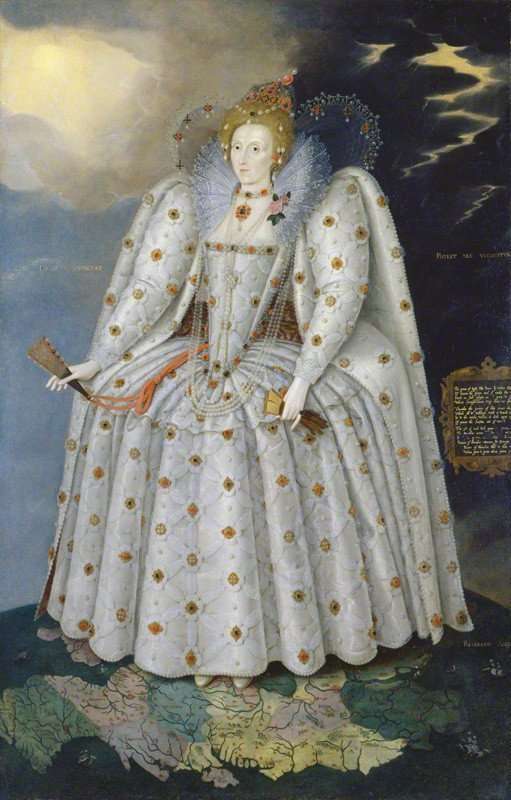 Gosnold was born in 1571 at Otley, near Ipswich, Suffolk, England, to Anthony Gosnold and his wife, Dorothy Bacon. The Gosnolds were a wealthy and landed family whose home was at Suffolk’s Otley Hall, and who became close allies of Robert Devereux, second earl of Essex, an aristocratic military commander and a court favorite of Elizabeth I. Educated with his siblings, Anthony, Elizabeth, and Margaret, by private tutors at Otley Hall, Gosnold enrolled at Cambridge University’s Jesus College in 1587, and after completing his studies there, he moved on to study law at the Middle Temple in London. There, it is likely that he heard lectures by the geographer Richard Hakluyt (the younger), which may have served as a principal inspiration for Gosnold’s transatlantic ventures in the following decades.

In 1595 Gosnold married Mary Goldinge, of Essex, and two years later his uncle Robert Gosnold, the owner of Otley Hall, arranged for him to join the earl of Essex’s military expedition to the Azores, a group of islands in the Atlantic Ocean west of Lisbon, Portugal. Although the raid, commanded by Sir Walter Raleigh with Essex, was unsuccessful, Gosnold appears to have spent approximately a year in the Atlantic engaged in privateering ventures against Spanish ships. He came back to England having accumulated a modest fortune from these exploits. 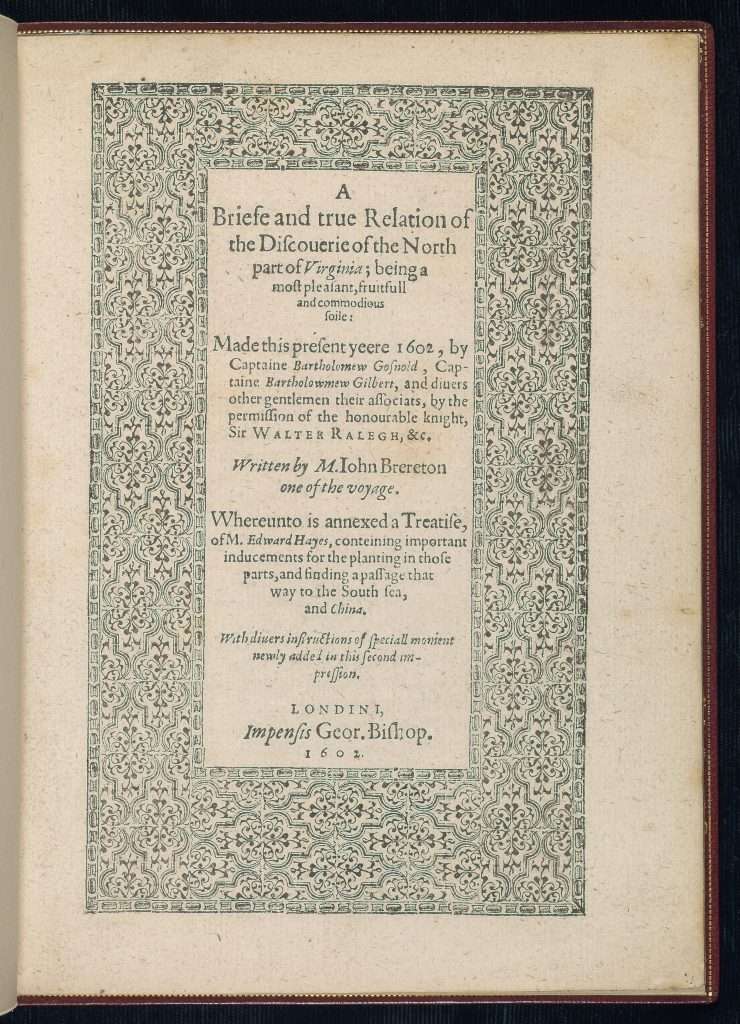 After his return to England, Gosnold focused on colonizing North America, a plan that had the backing of Essex but ran aground when the earl lost favor with Elizabeth and was beheaded in 1601 for conspiring against her. Gosnold managed to win the financial support of Henry Wriothesley, third earl of Southampton, despite the fact that Southampton was imprisoned in the Tower of London as part of the Essex plot. On March 26, 1602, Gosnold’s expedition departed Falmouth on the ship Concord, carrying twenty colonists and a dozen crewmembers. In May he made landfall at what is now Cape Elizabeth, near Portland, Maine. Sailing southward in search of an appropriate site for settlement, Gosnold navigated around a peninsula he named Cape Cod, for the large number of fish he observed in the surrounding waters. His was the first documented European visit to this region.

Having rounded the cape, he named the large island he encountered Martha’s Vineyard, in commemoration of his first child, already deceased, and because of the wild grapes that covered much of the land. Gosnold selected a nearby island, Elizabeth Island (named for the queen but later renamed Cuttyhunk Island), as his expedition’s place of settlement, and he and his crew built a small fort there. As the summer of 1602 drew to an end, however, the settlers began to lose enthusiasm: they feared the hostility of local Indians, and were concerned that their stock of provisions was insufficient to feed them over the coming winter. Gosnold gave in to their wishes and sailed with them back to England on the Concord, bringing with him a cargo of local sassafras, which was valued principally as a supposed cure for syphilis. 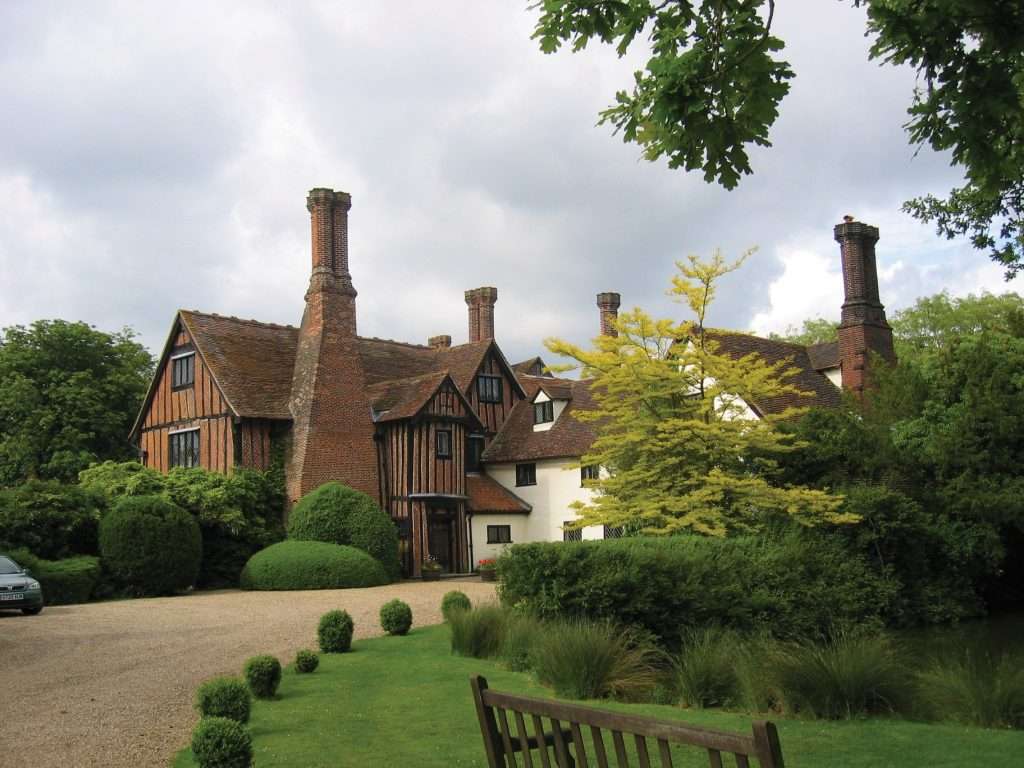 Despite this setback, which was satirized by Ben Jonson, George Chapman, and John Marston in their play, Eastward Ho! (1605), Gosnold remained enthusiastic about the possibilities for English colonization in North America. From his family’s moated manor in Suffolk he recruited supporters for what became the Virginia Company of London. Gosnold’s wife’s cousin Sir Thomas Smythe became company treasurer and Gosnold’s cousin Edward Maria Wingfield a leading member. In his Generall Historie of Virginia, New-England, and the Summer Isles (1624), John Smith identifies Gosnold as “one of the first movers of this plantation.” With Wingfield, Gosnold succeeded in raising interest and, eventually, recruiting approximately forty participants, the majority of whom were the younger sons of gentry families, for a voyage to a region several hundred miles to the south of Cape Cod. At least six of the adventurers were related to Gosnold, among them Gosnold’s brother, Anthony Gosnold, and a cousin by the same name.

On December 20, 1606, the expedition’s three ships, the Godspeed—commanded by Gosnold—the Susan Constant, and the Discovery, departed from London. Despite Gosnold having been the leading figure in organizing the voyage, Captain Christopher Newport took charge, possibly for political reasons dating back to Gosnold’s association with Essex. Gosnold served as vice admiral and Wingfield as the sole personal representative of the Virginia Company. During the crossing, Smith was accused of mutiny, and when the fleet reached Nevis, in the West Indies, in March 1607, Newport ordered gallows erected. Only Smith’s friend Gosnold and a chaplain were able to prevent an execution. On April 26, 1607, the three ships made landfall on the coast of Virginia, at the mouth of what they named the James River, in honor of King James I.

The early months of the settlement were challenging, with Gosnold and others boasting to company leaders of the beautiful country but also asking for more supplies. When the Virginia Company named seven men, including Gosnold, to sit on the ruling Council of Virginia, the settlers initially accepted the decision and approved of the councillors’ selection of Wingfield as president. Soon, though, serious tensions developed among members of the council, particularly between Wingfield and Smith. The colonists, few of whom had traveled outside of England or had either experience with or interest in heavy manual labor, struggled to build a fort and outbuildings and to provide themselves with adequate supplies of food and clean water. At the same time, they suffered in the unexpectedly hot weather and swampy, mosquito-filled environment, and clashed repeatedly with the nearby Algonquian-speaking Indians of Tsenacomoco. Although many of the Englishmen soon became disaffected toward Wingfield—an older career military man whom they viewed as overly dictatorial in his management of Jamestown—most respected and admired Gosnold. They considered him to be doing his utmost to ensure the settlement’s success. This included helping to design the fort, exploring and mapping the nearby territory, prospecting for minerals, and scattering an Indian attack by firing the Godspeed‘s cannons.

As temperatures and humidity rose in the later summer months, many of the Englishmen became ill and some died. Gosnold was among the latter; he contracted a fever in mid-August and died on August 22, 1607, at the age of thirty-six. George Percy recorded the event, writing: “The two and twentieth day of August, there died Captaine Bartholomew Gosnold one of our Councell, he was honourably buried, having all the Ordnance in the Fort shot off with many vollies of small shot.” Gosnold was greatly mourned by the surviving settlers, who, with Wingfield having grown highly unpopular and Newport away in England, had come to see Gosnold as the de facto leader of their community.

Possible Remains of Bartholomew Gosnold
In 2003, archaeologists at Historic Jamestowne excavated a grave they believed to be that of Gosnold, as it included a coffin whose lid was decorated with a captain’s staff, and contained a nearly intact skeleton of a male aged in his upper thirties. The scholars hoped that they would be able to prove the man’s identity by matching DNA from the bones with that taken from the remains of Gosnold’s sister, Elizabeth Gosnold Tilney, from a church near Ipswich. However, the latter skeleton turned out not to be that of Tilney, and as a result, the conservation group APVA/Preservation Virginia announced in 2005 that it was not possible to make a decisive statement that the newly excavated Jamestown grave was actually that of Gosnold.
RELATED CONTENT
Categories:
Type:
MAP
TIMELINE
1571
Bartholomew Gosnold is born at Otley, Suffolk, England, the son of Anthony Gosnold and his wife Dorothy Bacon Gosnold.
1587
Bartholomew Gosnold enrolls at Jesus College, Cambridge, England.
1592
Bartholomew Gosnold studies law at Middle Temple in London, England.
1595
Bartholomew Gosnold marries Mary Goldinge, of Essex, England.
1597
At the behest of his uncle Robert Gosnold, Bartholomew Gosnold joins Robert Devereux, second earl of Essex, on his expedition to the Azores, a group islands in the Atlantic Ocean west of Lisbon, Portugal. When the raid fails, Gosnold spends time privateering against Spanish ships.
March 26, 1602
An English colonizing expedition, led by Captain Bartholomew Gosnold, departs Falmouth on the ship Concord. Twenty colonists and a dozen crewmembers are aboard.
May 14, 1602
The English ship Concord, commanded by Captain Bartholomew Gosnold, anchors off a peninsula that Gosnold names Cape Cod. He later names Martha's Vineyard for his late daughter, before establishing a small colony on Cuttyhunk Island.
1605-1606
Bartholomew Gosnold and his cousin Edward Maria Wingfield recruit settlers for the proposed Virginia Company of London expedition, supplying approximately forty men and boys, most of whom are the younger sons of gentry families.
December 20, 1606
Three ships carrying 104 settlers sail from London bound for Virginia. Christopher Newport captains the Susan Constant, Bartholomew Gosnold the Godspeed, and John Ratcliffe the Discovery.
March 1607
In the West Indies, colonists on the three Virginia-bound ships under the command of Captain Christopher Newport go ashore to hunt, fish, and rest. Newport builds gallows to hang John Smith, but Smith is spared when Bartholomew Gosnold and the Reverend Robert Hunt intercede on his behalf.
April 26, 1607
Jamestown colonists first drop anchor in the Chesapeake Bay, and after a brief skirmish with local Indians, begin to explore the James River.
May 1607
Bartholomew Gosnold takes an expedition of about twenty settlers to inspect the higher ground and dig for minerals near the Jamestown settlement.
August 22, 1607
Bartholomew Gosnold dies at Jamestown, probably from a sickness caused by drinking polluted water.
2003
Archaeologists at the Jamestown site unearth a skeleton they believe may be that of Bartholomew Gosnold, an original settler who died in August 1607.
November 2005
After an unsuccessful attempt to obtain DNA samples from the bones of Bartholomew Gosnold's sister Elizabeth Tilney, APVA/Preservation Virginia announces that it cannot confirm that a skeleton found in 2003 is that of Gosnold.
FURTHER READING
CITE THIS ENTRY