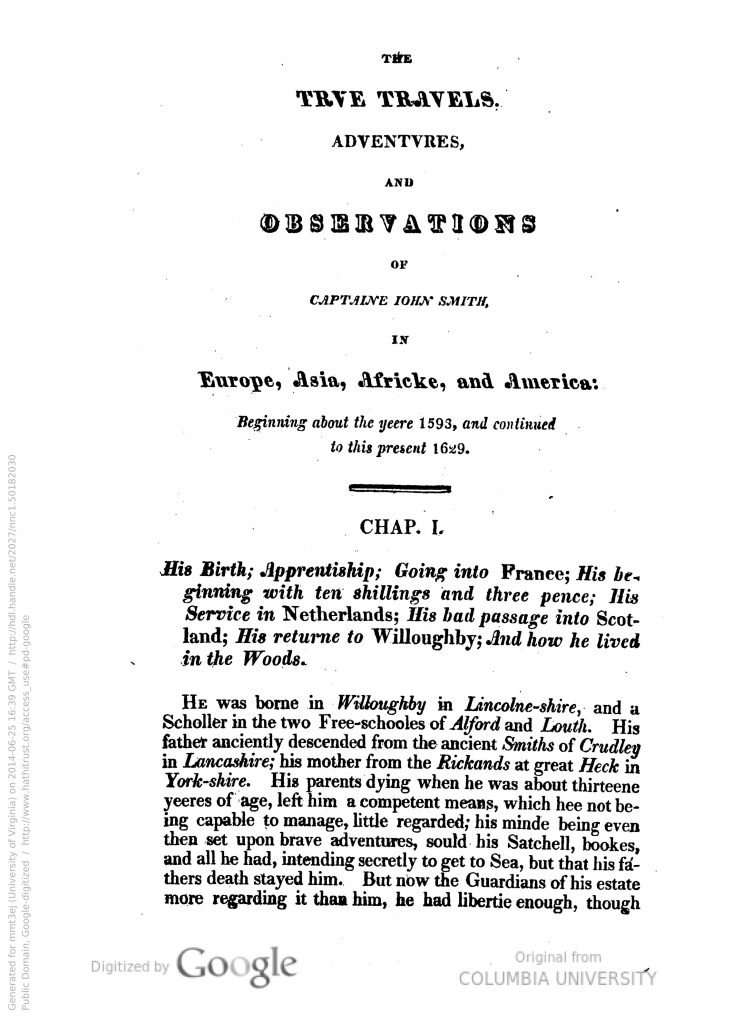 His Birth; Apprentiship; Going into France; His beginning with ten shillings and three pence; His Service in Netherlands; His bad passage into Scotland; His returne to Willoughby; And how he lived in the Woods.

He was borne in Willoughby in Lincolne-shire, and a Scholler in the two Free-schooles of Alford and Louth. His father anciently descended from the ancient Smiths of Crudley in Lancashire; his mother from the Rickands at great Heck in York-shire. His parents dying when he was about thirteene yeeres of age, left him a competent meanes, which hee not being capable to manage, little regarded; his minde being even then set upon brave adventures, sould his Satchell, bookes, and all he had, intending secretly to get to Sea, but that his fathers death stayed him. But now the Guardians of his estate more regarding it than him, he had libertie enough, though 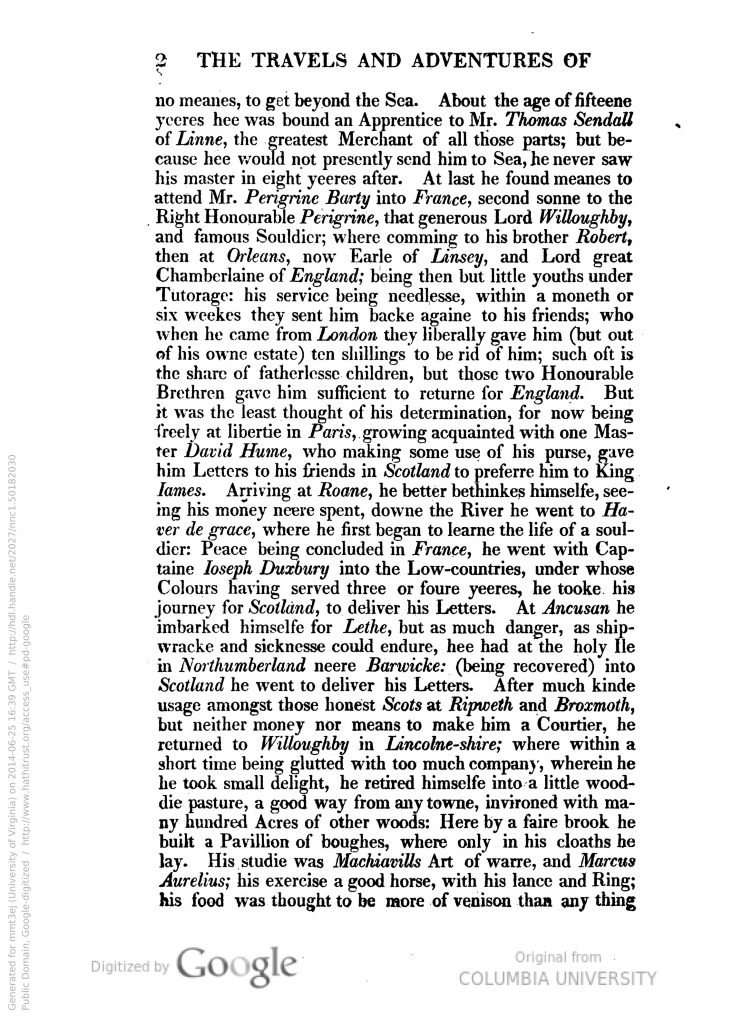 no meanes, to get beyond the Sea. About the age of fifteene yeeres hee was bound an Apprentice to Mr. Thomas Sendall of Linne, the greatest Merchant of all those parts; but because hee would not presently send him to Sea, he never saw his master in eight yeeres after. At last he found meanes to attend Mr. Perigrine Barty into France, second sonne to the Right Honourable Perigrine, that generous Lord Willoughby, and famous Souldier; where comming to his brother Robert, then at Orleans, now Earle of Linsey, and Lord great Chamberlaine of England; being then but little youths under Tutorage: his service being needlesse, within a moneth or six weekes they sent him backe againe to his friends; who when he came to London they liberally gave him (but out of his owne estate) ten shillings to be rid of him; such oft is the share of fatherlesse children, but those two Honourable Brethren gave him sufficient to returne for England. But it was the least thought of his determination, for now being freely at libertie in Paris, growing acquainted with one Master David Hume, who making some use of his purse, gave him Letters to his friends in Scotland to preferre him to King Iames. Arriving at Roane, he better bethinkes himselfe, seeing his money neere spent, downe the River he went to Haver de grace, where he first began to learne the life of a souldier: Peace being concluded in France, he went with Captaine Ioseph Duxbury into the Low-countries, under whose Colours having served three or four yeeres, he tooke his journey for Scotland, to deliver his Letters. At Ancusan he imbarked himselfe for Lethe, but as much danger, as shipwracke and sicknesse could endure, hee had at the holy Ile in Northumberland neere Barwicke: (being recovered) into Scotland he went to deliver his Letters. After much kinde usage amongst those honest Scots at Ripweth and Broxmoth, but neither money nor means to make him a Courtier, he returned to Willoughby in Lincolne-shire; where within a short time being glutted with too much company, wherein he took small delight, he retired himselfe into a little woodie pasture, a good way from any towne, invironed with many hundred Acres of other woods: Here by a faire brook he built a Pavillion of boughes, where only in his cloaths he lay. His studie was Machiavills Art of warre, and Marcus Aurelius; his exercise a good horse, with his lance and Ring; his food was thought to be more of venison than any thing 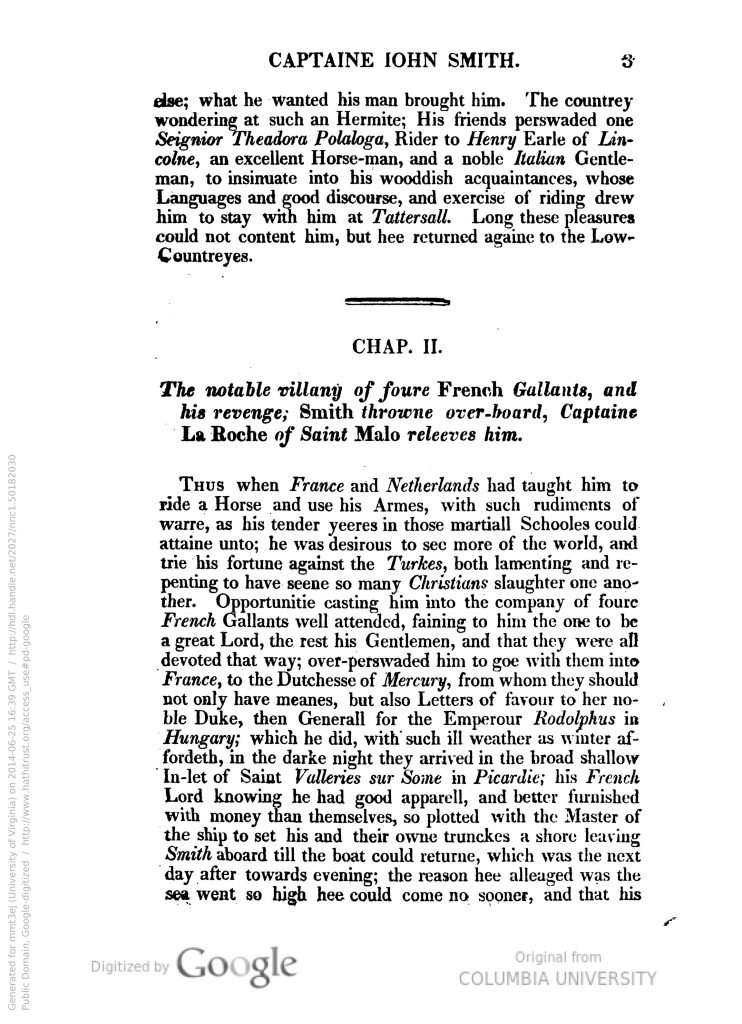 else; what he wanted his man brought him. The countrey wondering at such an Hermite; His friends perswaded one Seignior Theadora Polaloga, Rider to Henry Earle of Lincolne, an excellent Horse-man, and a noble Italian Gentleman, to insinuate into his wooddish acquaintances, whose Languages and good discourse, and exercise of riding drew him to stay with him at Tattersall. Long these pleasures could not content him, but hee returned againe to the Low-Countreyes.

Thus when France and Netherlands had taught him to ride a Horse and use his Armes, with such rudiments of warre, as his tender yeeres in those martiall Schooles could attaine unto; he was desirous to see more of the world, and trie his fortune against the Turkes, both lamenting and repenting to have seene so many Christians slaughter one another. Opportunitie casting him into the company of foure French Gallants well attended, faining to him the one to be a great Lord, the rest his Gentlemen, and that they were all devoted that way; over-perswaded him to goe with them into France, to the Duchesse of Mercury, from whom they should not only have meanes, but also Letters of favour to her noble Duke, then Generall for the Emperour Rodolphus in Hungary; which he did, with such ill weather as winter affordeth, in the darke night they arrived in the broad shallow In-let of Saint Valleries sur Some in Picardie; his French Lord knowing he had good apparell, and better furnished with money than themselves, so plotted with the Master of the ship to set his and their owne trunckes a shore leaving Smith aboard till the boat could returne, which was the next day after towards evening, the reason hee alleaged was the sea went so high hee could come no sooner, and that his 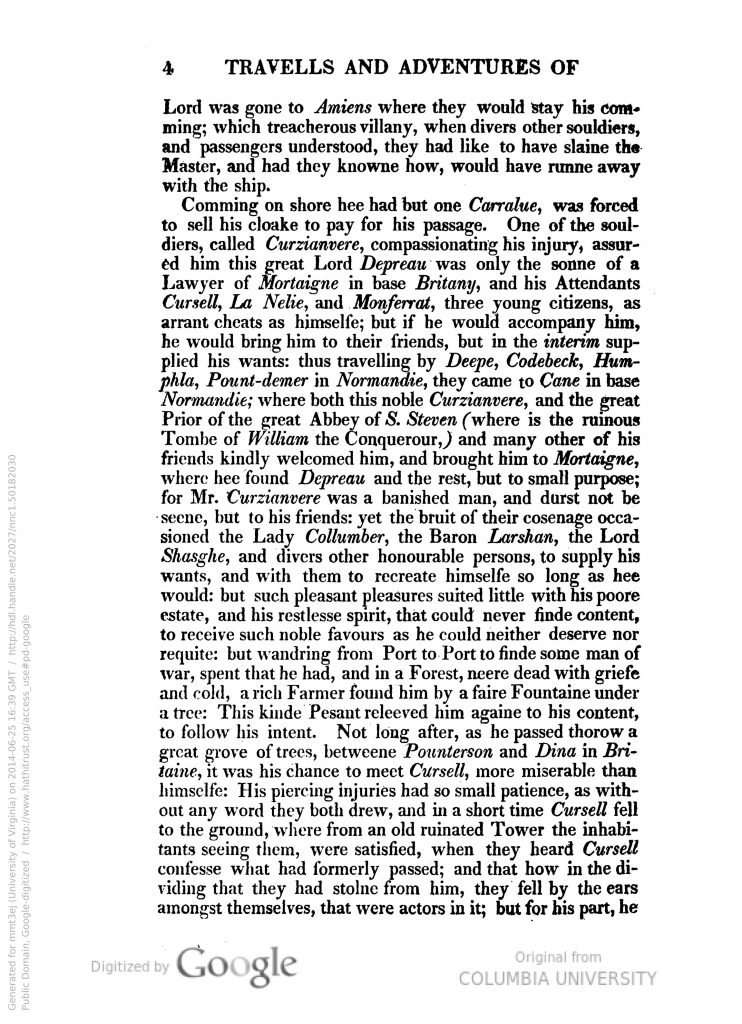 Lord was gone to Amiens where they would stay his comming; which treacherous villainy, when divers other souldiers, and passengers understood, they had like to have slaine the Master, and had they knowne how, would have runne away with the ship.

Comming on shore hee had but one Carralue, was forced to sell his cloake to pay for his passage. One of the souldiers, called Curzianvere, compassionating his injury, assured him this great Lord Depreau was only the sonne of a Lawyer of Montaigne in base Britany, and his Attendants Cursell, La Nelie, and Monferrat, three young citizens, as arrant cheats as himselfe, but if he would accompany him, he would bring him to their friends, but in the interim supplied his wants: thus travelling by Deepe, Codebeck, Humphla, Pount-demer in Normandie, they came to Cane in base Normandie; where both this noble Curzianvere, and the great Prior of the great Abbey of S. Steven (where is the ruinous Tombe of William the Conqueror), and many other of his friends kindly welcomed him, and brought him to Montaigne, where hee found Depreau and the rest, but to small purpose; for Mr. Curzianvere was a banished man, and durst not be seene, but to his friends: yet the bruit of their cosenage occasioned the Lady Collumber, the Baron Larshan, the Lord Shasghe, and divers other honourable persons, to supply his wants, and with them to recreate himselfe so long as hee would: but such pleasant pleasures suited little with his poore estate, and his restlesse spirit, that could never finde content, to receive such noble favours as he could neither deserve nor requite: but wandring from Port to Port to finde some man of war, spent that he had, and in a Forest, neere dead with griefe and cold, a rich Farmer found him by a faire Fountaine under a tree: This kind Pesant releeved him againe to his content, to follow his intent. Not long after, as he passed thorow a great grove of trees, betweene Pounterson and Dina in Britaine, it was his chance to meet Cursell, more miserable than himselfe: His piercing injuries had so small patience, as without any word they both drew, and in a short time Cursell fell to the ground, where from an old ruinated Tower the inhabitants seeing them, were satisfied, when they heard Cursell confesse what had formerly passed; and that how in the dividing that they had stolne from him, they fell by the ears amongst themselves, that were actors in it; but for his part, he 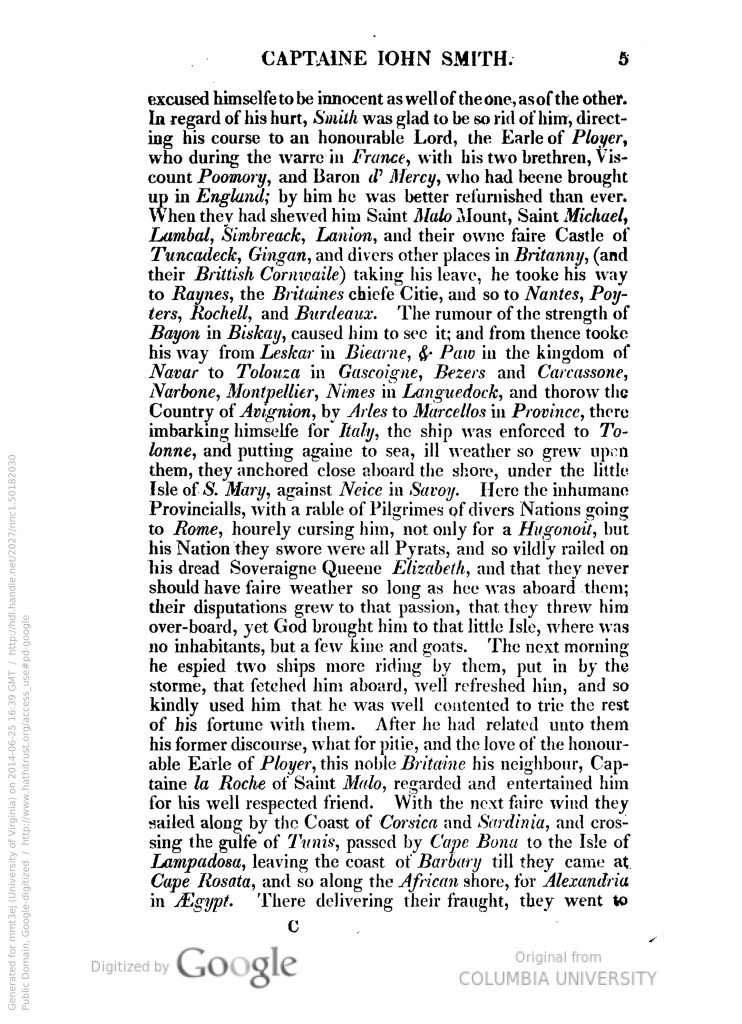 excused himselfe to be innocent as well of the one, as of the other. In regard of his hurt, Smith was glad to be so rid of him, directing his course to an honourable Lord, the Earle of Ployer, who during the warre in France, with his two brethren, Viscount Poomory, and Baron d’ Mercy, who had beene brought up in England; by him he was better refurnished than ever. When they had shewed him Saint Malo Mount, Saint Michael, Lambal, Simbreack, Lanion, and their owne faire Castle of Tuncadeck, Gingan, and divers other places in Brittany, (and their Brittish Cornwaile) taking his leave, he tooke his way to Raynes, the Britaines chiefe Citie, and so to Nantes, Poyters, Rochell, and Burdeaux. The rumour of the strength of Bayon in Biskay, caused him to see it; and from thence tooke his way from Leskar in Biearne, & Paw in the kingdom of Navar to Tolouza in Gascoigne, Bezers and Carcassone, Narbone, Montpellier, Nimes in Languedock, and thorow the Country of Avignion, by Arles to Marcellos in Province, there imbarking himselfe for Italy, the ship was enforced to Tolonne, and putting againe to sea, ill weather so grew upon them, they anchored close aboard the shore, under the little Isle of S. Mary, against Neice in Savoy. Here the inhumane Provincialls, with a rable of Pilgrimes of divers Nations going to Rome, hourely cursing him, not only for a Hugonoit, but his Nation they swore were all Pyrats, and so vildly railed on his dread Soveraigne Queene Elizabeth, and that they never should have faire weather so long as hee was aboard them; their disputations grew to that passion, that they threw him over-board, yet God brought him to that little Isle, where was no inhabitants, but a few kine and goats. The next morning he espied two ships more riding by them, put in by the storme, that fetched him aboard, well refreshed him, and so kindly used him that he was well contented to trie the rest of his fortune with them. After he had related unto them his former discourse, what for pitie, and the love of the honourable Earle of Ployer, this noble Britaine his neighbour, Captaine la Roche of Saint Malo, regarded and entertained him for his well respected friend. With the next faire wind they sailed along by the Coast of Corsica and Sardinia, and crossing the gulfe of Tunis, passed by Cape Bona to the Isle of Lampadosa, leaving the coast of Barbary till they came at Cape Rosata, and so along the African shore, for Alexandria in Ægypt. There delivering their fraught, they went to 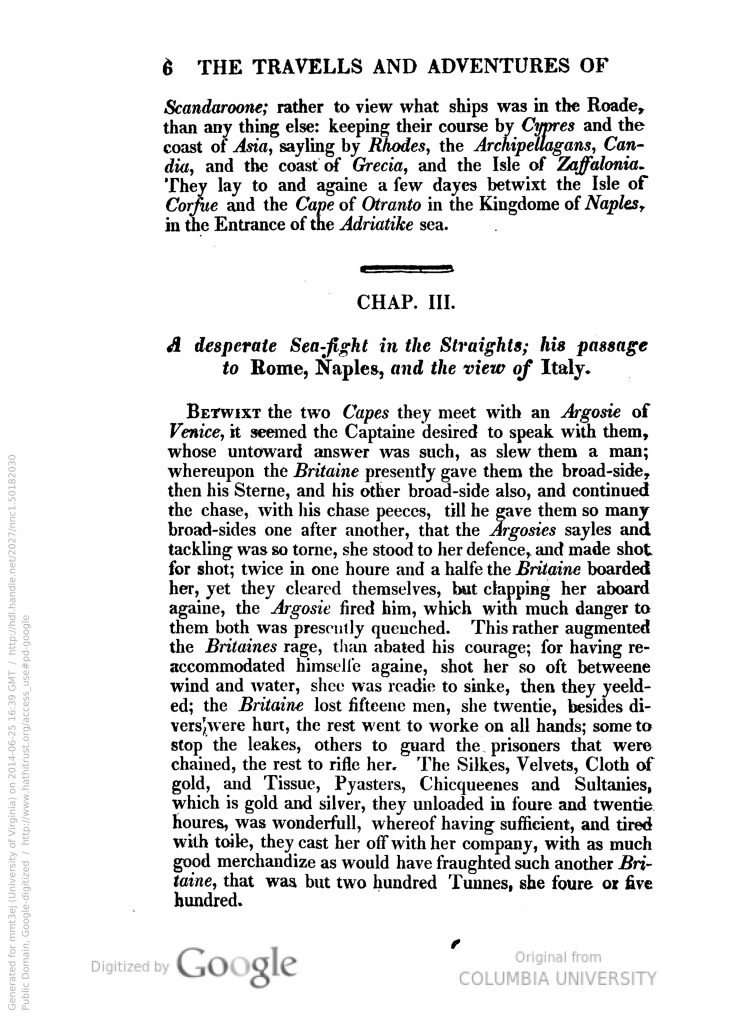 Scandaroone; rather to view what ships was in the Roade, than any thing else: keeping their course by Cypres and the coast of Asia, sayling by Rhodes, the Archipellagans, Candia, and the coast of Grecia, and the Isle of Zaffalonia. They lay to and againe a few dayes betwixt the Isle of Corfue and the Cape of Otranto in the Kingdome of Naples, in the Entrance of the Adriatike sea.