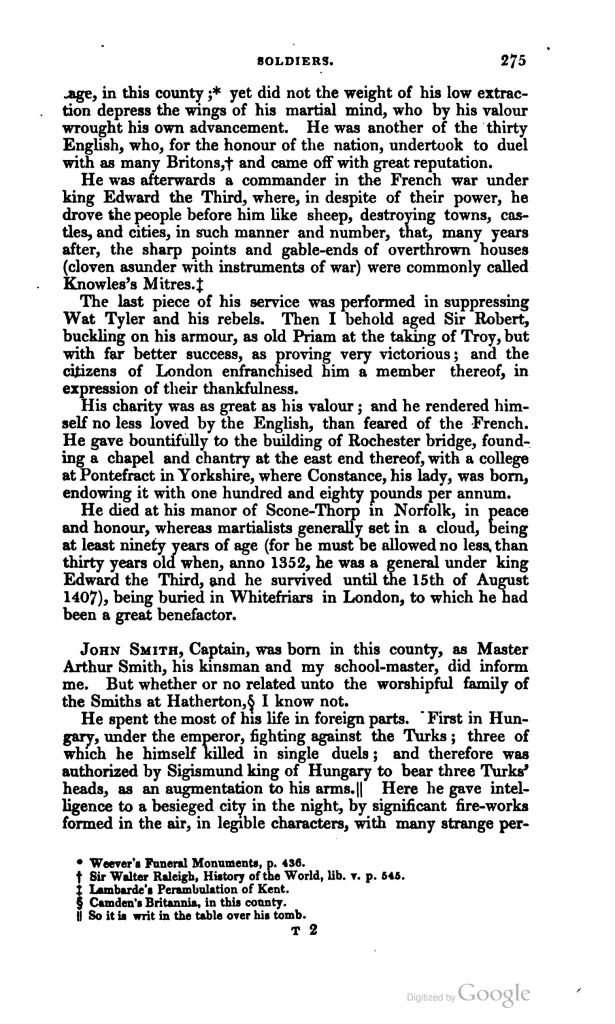 John Smith, Captain, was born in this county, as Master Arthur Smith, his kinsman and my school-master, did inform me. But whether or no related unto the worshipful family of the Smiths at Hatherton, I know not.

He spent the most of his life in foreign parts. First in Hungary, under the emperor, fighting against the Turks; three of which he himself killed in single duels; and therefore was authorized by Sigismund king of Hungary to bear three Turks’ heads, as an augmentation to his arms. Here he gave intelligence to a besieged city in the night, by significant fire-works formed in the air, in legible characters, with many strange per- 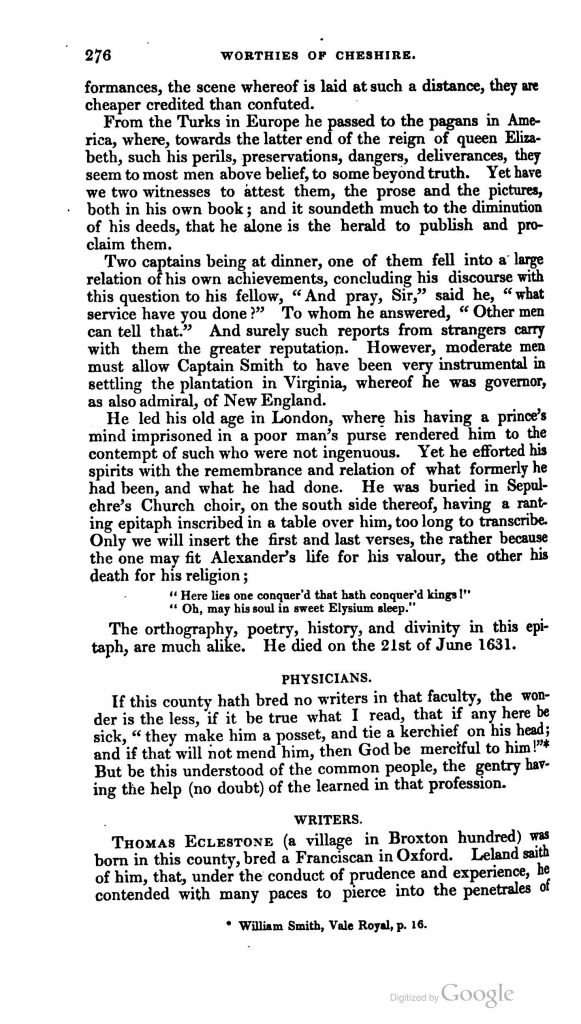 formances, the scene whereof is laid at such a distance, they are cheaper credited than confuted.

From the Turks in Europe he passed to the pagans in America, where, towards the latter end of the reign of queen Elizabeth, such his perils, preservations, dangers, deliverances, they seem to most men above belief, to some beyond truth. Yet have we two witnesses to attest them, the prose and the pictures, both in his own book; and it soundeth much to the diminution of his deeds, that he alone is the herald to publish and proclaim them.

Two captains being at dinner, one of them fell into a large relation of his own achievements, concluding his discourse with this question to his fellow, “And pray, Sir,” said he, “what service have you done?” To whom he answered, “Other men can tell that.” And surely such reports from strangers carry with them the greater reputation. However, moderate men must allow Captain Smith to have been very instrumental in settling the plantation in Virginia, whereof he was governor, as also admiral, of New England.

He led his old age in London, where his having a prince’s mind imprisoned in a poor man’s purse rendered him to the contempt of such who were not ingenuous. Yet he efforted his spirits with the remembrance and relation of what formerly he had been, and what he had done. He was buried in Sepulchre’s Church choir, on the south side thereof, having a ranting epitaph inscribed in a table over him, too long to transcribe. Only we will insert the first and last verses, the rather because the one may fit Alexander’s life for his valour, the other his death for his religion;

“Here lies one conquer’d that hath conquer’d kings!”
“Oh, may his soul in sweet Elysium sleep.”

The orthography, poetry, history, and divinity in this epitaph, are much alike. He died on the 21st of June 1631.