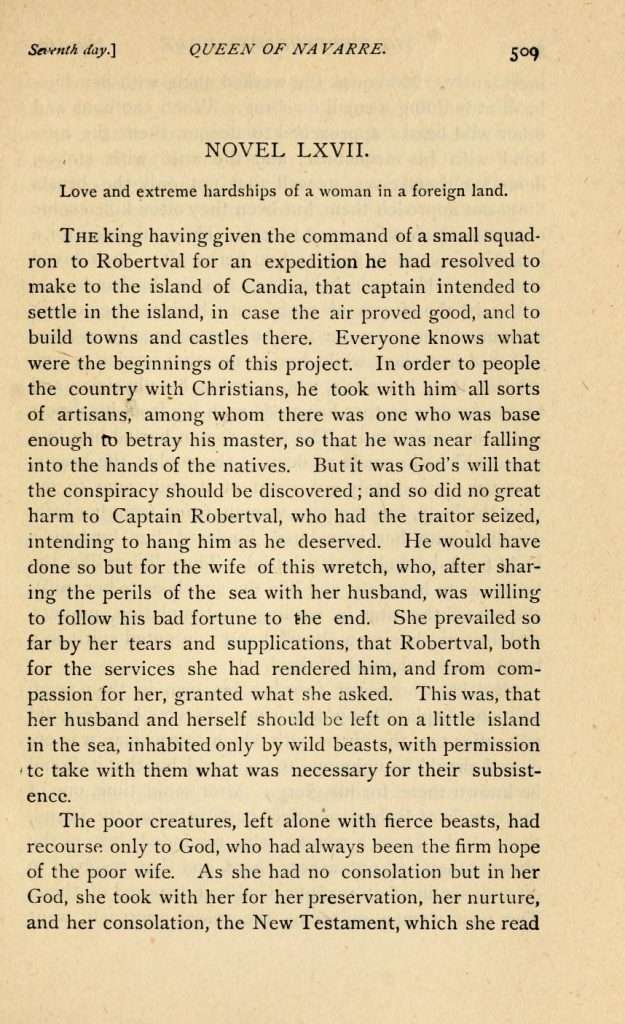 Love and extreme hardships of a woman in a foreign land.

The king having given the command of a small squadron to Robertval for an expedition he had resolved to make to the island of Candia, that captain intended to settle in the island, in case the air proved good, and to build towns and castles there. Everyone knows what were the beginnings of this project. In order to people the country with Christians, he took with him all sorts of artisans, among whom there was one who was base enough to betray his master, so that he was near falling into the hands of the natives. But it was God’s will that the conspiracy should be discovered; and so did no great harm to Captain Robertval, who had the traitor seized, intending to hang him as he deserved. He would have done so but for the wife of this wretch, who, after sharing the perils of the sea with her husband, was willing to follow his bad fortune to the end. She prevailed so far by her tears and supplications, that Robertval, both for the services she had rendered him, and from compassion for her, granted what she asked. This was, that her husband and herself should be left on a little island in the sea, inhabited only by wild beasts, with permission to take with them what was necessary for their subsistence.

The poor creatures, left alone with fierce beasts, had recourse only to God, who had always been the firm hope of the poor wife. As she had no consolation but in her God, she took with her for her preservation, her nurture, and her consolation, the New Testament, which she read 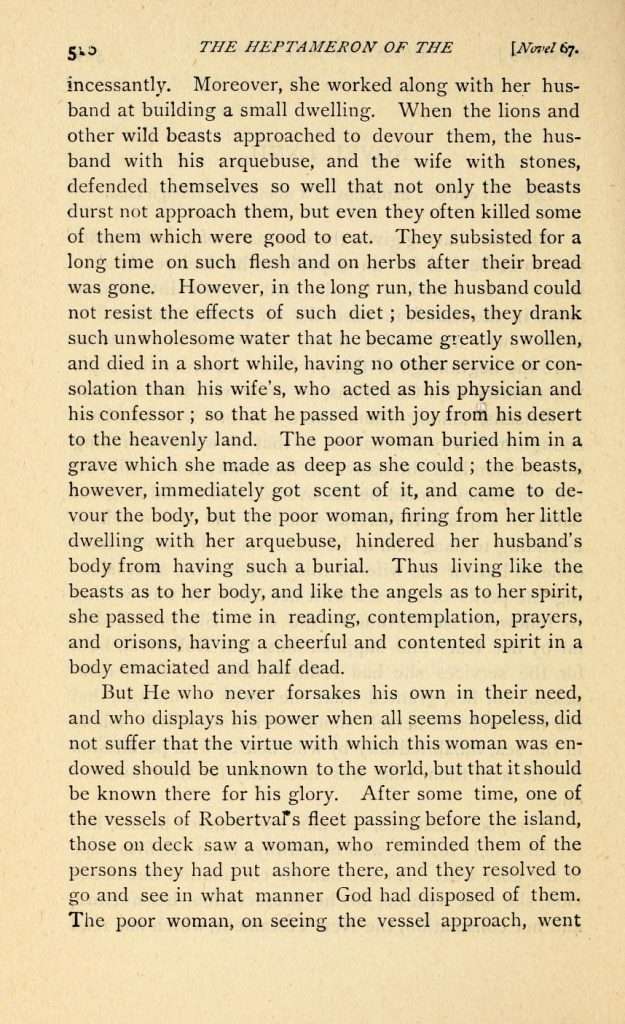 incessantly. Moreover, she worked along with her husband at building a small dwelling. When the lions and other wild beats approached to devour them, the husband with his arquebuse, and the wife with stones, defended themselves so well that no only the beats durst not approach them, but even they often killed some of them which were good to eat. They subsisted for a long time on such flesh and on herbs after their bread was gone. However, in the long run, the husband could not resist the effects of such diet; besides, they drank such unwholesome water that he became greatly swollen, and died in a short while, having no other service or consolation than his wife’s, who acted as his physician and his confessor; so that he passed with joy from his desert to the heavenly land. The poor woman buried him in a grave which she made as deep as she could; the beasts, however, immediately got scent of it, and came to devour the body, but the poor woman, firing from her little dwelling with her arquebuse, hindered her husband’s body from having such a burial. Thus living like the beasts as to her body, and like the angels as to her spirit, she passed the time in reading, contemplation, prayers, and orisons, having a cheerful and contented spirit in a body emaciated and half dead.

But He who never forsakes his own in their need, and who displays his power when all seems hopeless, did not suffer that the virtue with which this woman was endowed should be unknown to the world, but that it should be known there for his glory. After some time, one of the vessels of Robertval’s fleet passing before the island, those on deck saw a woman, who reminded them of the persons they had put ashore there, and they resolved to go and see in what manner God had disposed of them. The poor woman, on seeing the vessel approach, went 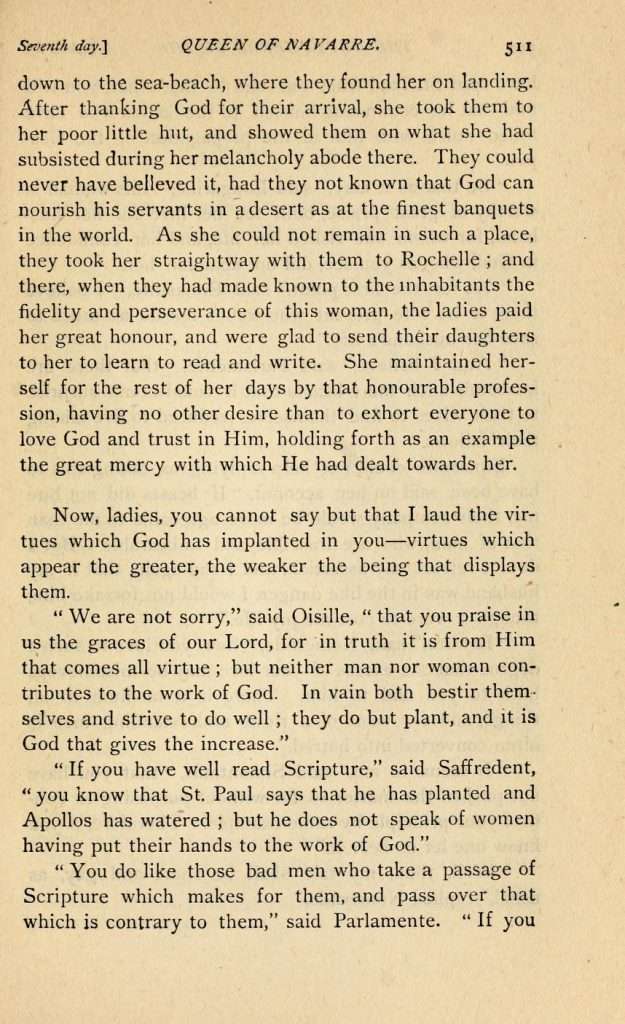 down to the sea-beach, where they found her on landing. After thanking God for their arrival, she took them to her poor little hut, and showed them on what she had subsisted during her melancholy abode there. They could never have believed it, had they not known that God can nourish his servants in a desert as at the finest banquets in the world. As she could not remain in such a place, they took her straightway with them to Rochelle; and there, when they had made known to the inhabitants the fidelity and perseverance of this woman, the ladies paid her great honour, and were glad to send their daughters to her to learn to read and write. She maintained herself for the rest of her days by that honourable profession, having no other desire than to exhort everyone to love God and trust in Him, holding forth as an example the great mercy with which He had dealt towards her.

Now, ladies, you cannot say but that I laud the virtues which God has implanted in you—virtues which appear the greater, the weaker the being that displays them.

“We are not sorry,” said Oisille, “that you praise in us the graces of our Lord, for in truth it is from Him that comes all virtue; but neither man nor woman contributes to the work of God. In vain both bestir themselves and strive to do well; they do but plant, and it is God that gives the increase.”

“If you have well read Scripture,” said Saffredent, “you know that St. Paul says that he has planted and Apollos has watered; but he does not speak of woman having put their hands to the work of God.”

“You do like those bad men who take a passage of Scripture which makes for them, and pass over that which is contrary to them,” said Parlamente. “If you 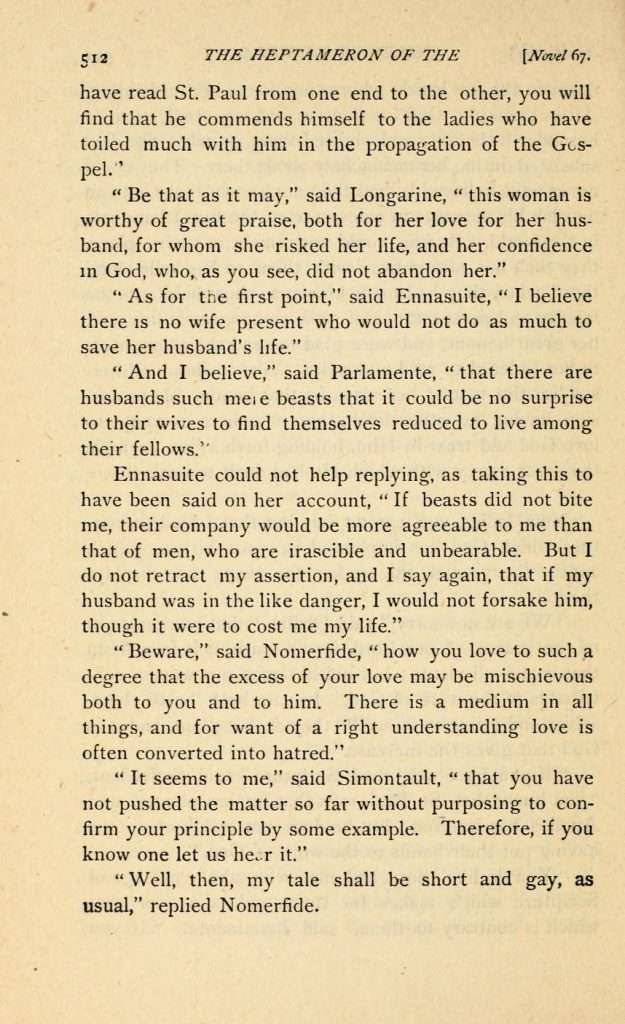 have read St. Paul from one end to the other, you will find that he commends himself to the ladies who have toiled much with him in the propagation of the Gospel.”

“Be that as it may,” said Longarine, “this woman is worthy of great praise, bot for her love for her husband, for whom she risked her life, and her confidence in God, who, as you see, did not abandon her.”

“As for the first point,” said Ennasuite, “I believe there is no wife present who would not do as much to save her husband’s life.”

“And I believe,” said Parlamente, “that there are husbands such mere beasts that it could be no surprise to their wives to find themselves reduced to live among their fellows.”

Ennasuite could not help replying, as taking this to have been said on her account, “If beasts did not bite me, their company would be more agreeable to me than that of men, who are irascible and unbearable. But I do not retract my assertion, and I say again, that if my husband was in the like danger, I would not forsake him, though it were to cost me my life.”

“Beware,” said Nomerfide, “how you love to such a degree that the excess of your love may be mischievous both to you and to him. There is a medium in all things, and for want of a right understanding love is often converted into hatred.”

“It seems to me,” said Simontault, “that you have not pushed the matter so far without purposing to confirm your principle by some example. Therefore, if you know one let us hear it.”

“Well, then, my tale shall be short and gay, as usual,” replied Nomerfide.

Inter caetera by Pope Alexander VI (May 4, 1493) Mundus novus (1503) El Requerimiento by Juan López de Palacios Rubios (1513) “The natives are white men”; an excerpt from De Orbe Novo by Peter Martyr d’Anghiera (1530) The Healers; an excerpt from La Relación by Álvar Núñez Cabeza de Vaca (1542) The Black Legend; an excerpt from A Brief Account of the Destruction of the Indies by Bartolomé de las Casas (1552) The Story of Juan Ortiz; an excerpt from The Discovery and Conquest of Terra Florida by a Gentleman of Elvas (1557) The Story of Guillaume Rouffi; an excerpt from Relación e información de los Franceses by Hernando de Manrique de Rojas (July 9, 1564) “The people of America crye oute unto us”; an excerpt from Discourse on Western Planting by Richard Hakluyt (the younger) (1584) John White Returns to Roanoke; an excerpt from “The fift voyage of Master John White into the West Indies and parts of America called Virginia, in the yeere 1590” (1600) Relation of Juan de la Carrera (March 1, 1600) Letters between King Philip III and Don Pedro de Zúñiga (1607–1608) Letters between King Philip III and Don Pedro de Zúñiga (1609–1610) “In wishing him well, he killed him”; excerpt from Relation of Juan Rogel (ca. 1611) Arriving in Virginia; an excerpt from “Observations gathered out of a Discourse of the Plantation of the Southerne Colonie in Virginia” by George Percy (1625)