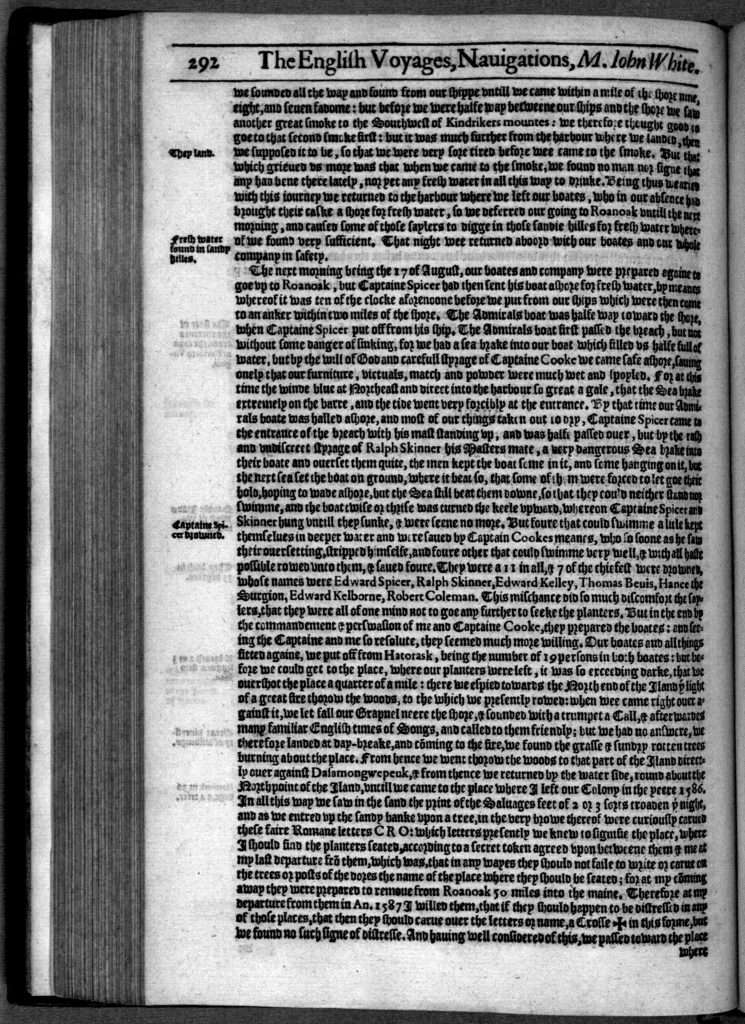 John White Returns to Roanoke; an excerpt from “The fift voyage of Master John White into the West Indies and parts of America called Virginia, in the yeere 1590” (1600), Page 292

[…] but before we could get to the place, where our planters were left, it was so exceeding darke, that we overshot the place a quarter of a mile: there we espied towards the North end of the Iland the light of a great fire thorow the woods, to the which we presently rowed: when wee came right over against it, we let fall our Grapnel neere the shore, & sounded with a trumpet a Call, & afterwardes many familiar English tunes of Songs, and called to them friendly; but we had no answere, we therefore landed at day-breake, and comming to the fire, we found the grasse & sundry rotten trees burning about the place. From hence we went thorow the woods to that part of the Iland directly over against Dasamongwepeuk, & from thence we returned by the water side, round about the Northpoint of the Iland, untill we came to the place where I left our Colony in the yeere 1586. In all this way we saw in the sand the print of the Salvages feet of 2 or 3 sorts troaden that night, and as we entred up the sandy banke upon a tree, in the very browe thereof were curiously carved these faire Romane letters CRO: which letters presently we knew to signifie the place, where I should find the planters seated, according to a secret token agreed upon betweene them & me at my last departure from them, which was, that in any wayes they should not faile to write or carve on the trees or posts of the dores the name of the place where they should be seated; for at my comming away they were prepared to remove from Roanoak 50 miles to the maine. Therefore at my departure from them in Anno 1587 I willed them, that if they should happen to be distressed in any of those places, that then they should carve over the letters or name, a Crosse ✠ in this forme, but we found no such signe of distresse. And having well considered of this, we passed toward the place 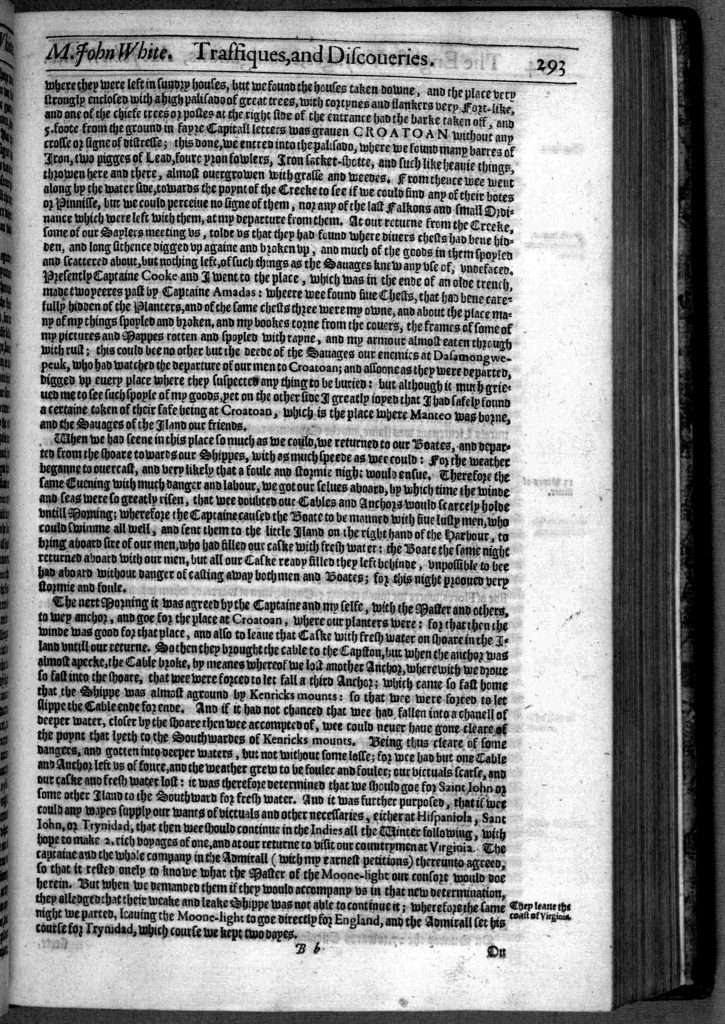 John White Returns to Roanoke; an excerpt from “The fift voyage of Master John White into the West Indies and parts of America called Virginia, in the yeere 1590” (1600), Page 293

where they were left in sundry houses, but we found the houses taken downe, and the place very strongly enclosed with a high palisado of great trees, with cortynes and flankers very Fort-like, and one of the chiefe trees or postes at the right side of the entrance had the barke taken off, and 5. foote from the ground in fayre Capitall letters was graven CROATOAN without any crosse or signe of distresse; this done, we entred into the palisado, where we found many barres of Iron, two pigges of Lead, foure yron fowlers, Iron sacker-shotte, and such like heavie things, throwen here and there, almost overgrowen with grasse and weedes. From thence wee went along by the water side, towards the poynt of the Creeke to see if we could find any of their botes or Pinnisse, but we could perceive no signe of them, nor any of the last Falkons and small Ordinance which were left with them, at my departure from them. At our returne from the Creeke, some of our Saylers meeting us, tolde us that they had found where divers chests had bene hidden, and long sithence digged up againe and broken up, and much of the goods in them spoyled and scattered about, but nothing left, of such things as the Savages knew any use of, undefaced. Presently Captaine Cooke and I went to the place, which was in the ende of an olde trench, made two yeeres past by Captaine Amadas: wheere wee found five Chests, that had been carefully hidden of the Planters, and of the same chests, three were my owne, and about the place many of my things spoyled and broken, and my books torne from the covers, the frames of some of my pictures and Mappes rotten and spoyled with rayne, and my armour almost eaten through with rust; this could bee no other but the deede of the Savages our enemies at Dasamongwepeuk, who had watched the departure of our men to Croatoan; and assoone as they were departed, digged up every place where they suspected any thing to be buried: but although it much grieved me to see such spoyle of my goods, yet on the other side I greatly joyed that I had safely found a certaine token of their safe being at Croatoan, which is the place where Manteo was borne, and the Savages of the Iland our friends.