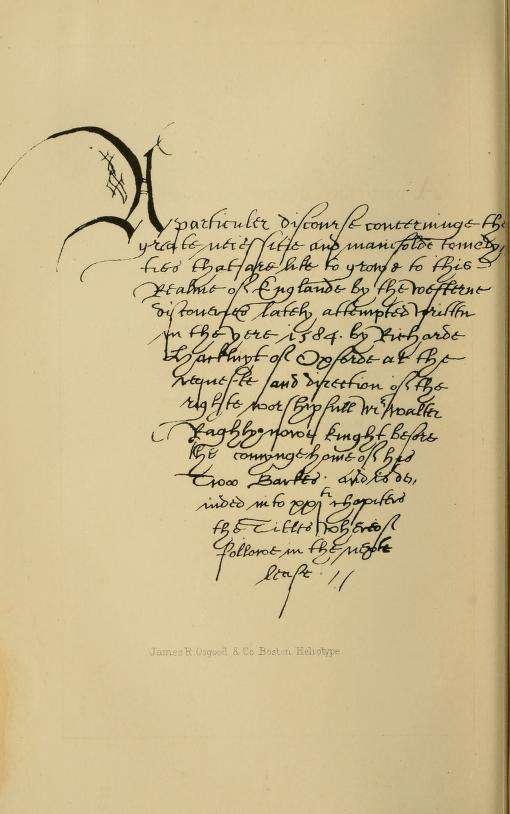 Documentary History of the State of Maine, Volume 2, Page 1

A particuler discourse concerninge the greate necessitie and manifolde comodyties that are like to growe to this Realme of Englande by the Westerne discoveries lately attempted written in the yere 1584 by Richarde Hackluyt of Oxforde at the requeste and direction of the righte worshipfull Mr Walter Raghly, nowe Knight before the comynge home of his two Barkes, and is devided into XXI chapiters […] 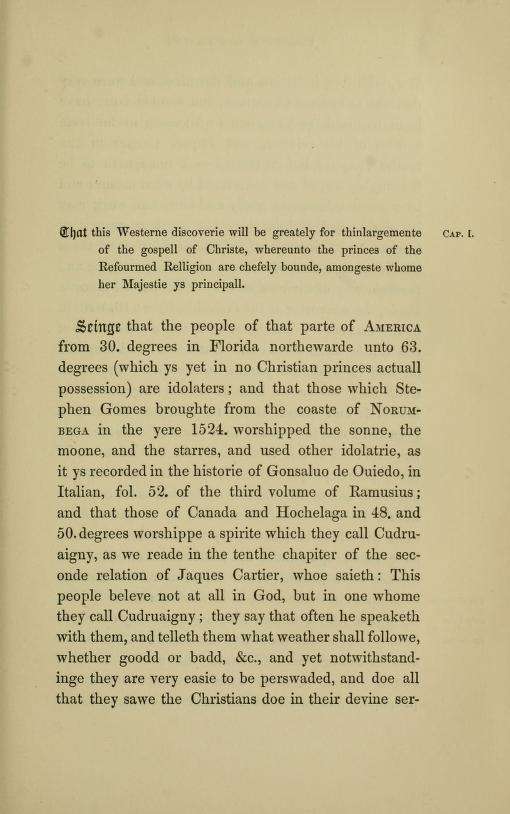 Documentary History of the State of Maine, Volume 2, Page 7

That this Westerne discoverie will be greately for thinlargemente of the gospell of Christe, whereunto the princes of the Refourmed Relligion are chefely bounde, amongeste whome her Majestie ys principall.

Seinge that the people of that parte of America from 30. degrees in Florida northewarde unto 63. degrees (which ys yet in no Christian princes actuall possession) are idolaters; and that those which Stephen Gomes broughte from the coaste of Norumbega in the yere 1524. worshipped the sonne, the moone, and the starres, and used other idolatrie, as it ys recorded in the historie of Gonsaluo de Ouiedo, in Italian, fol. 52. of the third volume of Ramusius; and that those of Canada and Hochelaga in 48. and 50. degrees worhippe a spirite which they call Cudruaigny, as we reade in the tenthe chapiter of the seconde relation of Jaques Cartier, whoe saieth: This people beleve not at all in God, but in one whome they call Cudruaigny; they say that often he speaketh with them, and telleth them what weather shall followe, whether goodd or badd, &c., and yet notwithstandinge they are very easie to be perswaded, and doe all that they sawe the Christians doe in their devine ser- 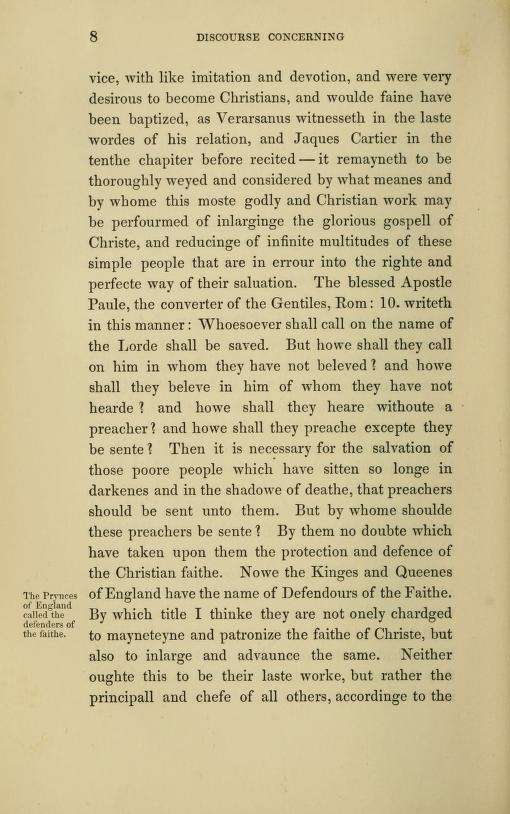 Documentary History of the State of Maine, Volume 2, Page 8

vice, with like imitation and devotion, and were very desirous to become Christians, and woulde faine have been baptized, as Verarsanus witnesseth in the laste wordes of his relation, and Jaques Cartier in the tenthe chapiter before recited—it remayneth to be thoroughly weyed and considered by what meanes and by whome this moste godly and Christian work may be perfourmed of inlarginge the glorious gospell of Christe, and reducinge of infinite multitudes of these simple people that are in errour into the righte and perfecte way of their salvation. 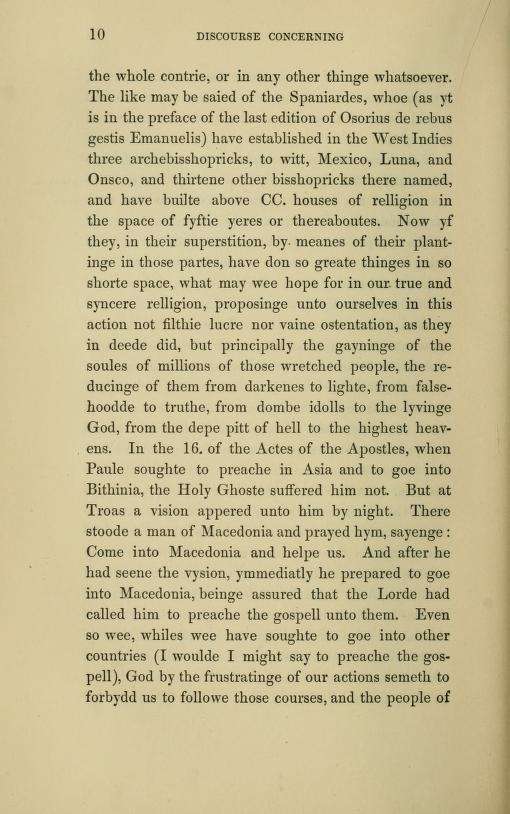 Documentary History of the State of Maine, Volume 2, Page 10

In the 16. of the Actes of the Apostles, when Paule soughte to preache in Asia and to goe into Bithinia, the Holy Ghoste suffered him not. But at Troas a vision appered unto him by night. There stoode a man of Macedonia and prayed hym, sayenge: Come into Macedonia and helpe us. And after he had seene the vysion, ymmediatly he prepared to goe into Macedonia, beinge assured that the Lorde had called him to preache the gospell unto them. Even so wee, whiles wee have soughte to goe into other countries (I woulde I might say to preache the gospell), God by the frustratinge of our actions semeth to forbydd us to followe those courses, and the people of 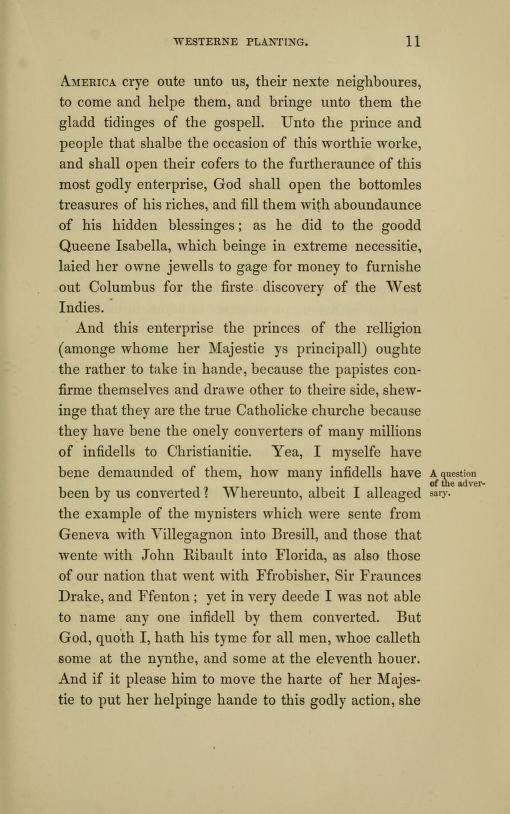 Documentary History of the State of Maine, Volume 2, Page 11

America crye oute unto us, their nexte neighboures, to come and helpe them, and bringe unto them the gladd tidinges of the gospell. 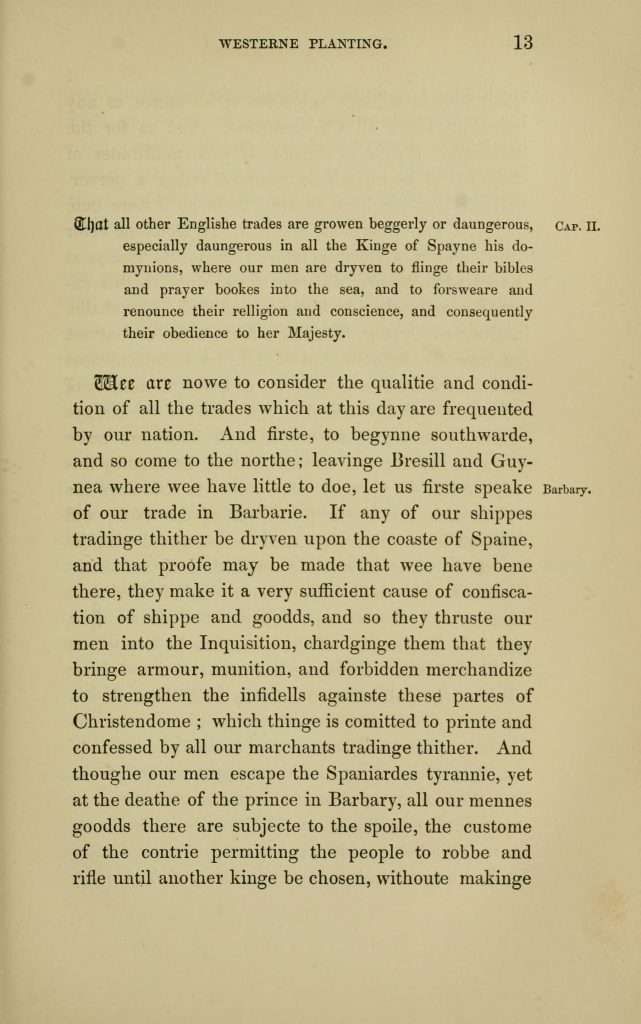 Documentary History of the State of Maine, Volume 2, Page 13

That all other Englishe trades are growen beggerly or daungerous, especially daungerous in all the Kinge of Spayne his domynions, where our men are dryven to flinge their bibles and prayer bookes into the sea, and to forsweare and renounce their relligion and conscience, and consequently their obedience to her Majesty. 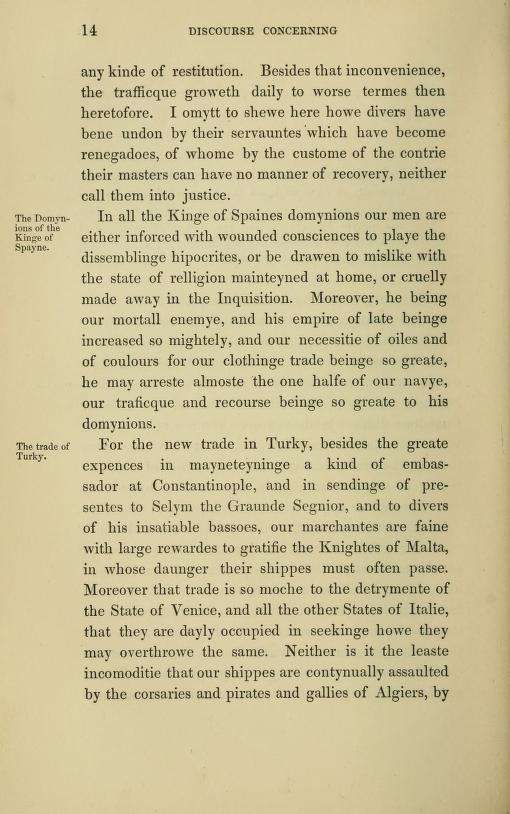 Documentary History of the State of Maine, Volume 2, Page 14

In all the Kinge of Spaines domynions our men are either inforced with wounded consciences to playe the dissembling hipocrites, or be drawen to mislike with the state of relligion mainteyned at home, or cruelly made away in the Inquisition. Moreover, he being our mortall enemye, and his empire of late beinge increased so mightely, and our necessitie of oiles and of coulours for our clothinge trade beinge so greate, he may arreste almoste the one halfe of our navye, our traficque and recourse beinge so greate to his domynions. 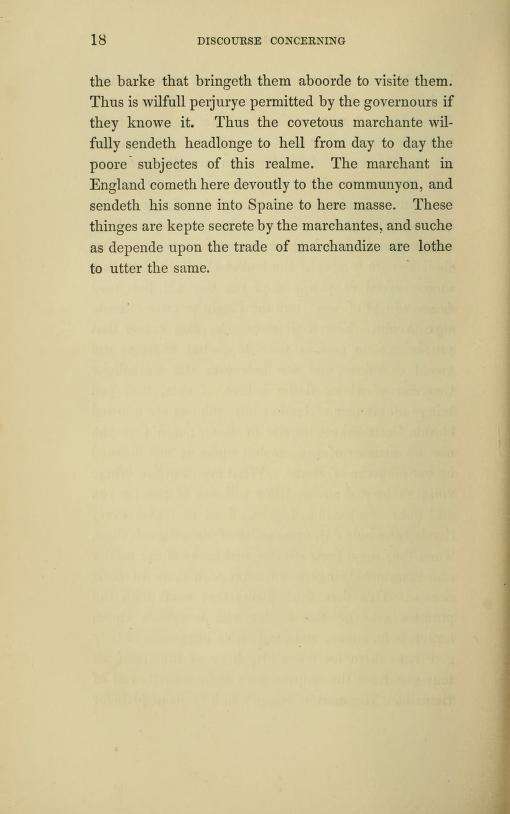 Documentary History of the State of Maine, Volume 2, Page 18

Thus the covetous marchante wilfully sendeth headlonge to hell from day to day the poore subjectes of this realme. The marchant in England cometh here devoutly to the communyon, and sendeth his sonne into Spaine to here masse. These thinges are kepte secrete by the marchantes, and suche as depende upon the trade of marchandize are lothe to utter the same. 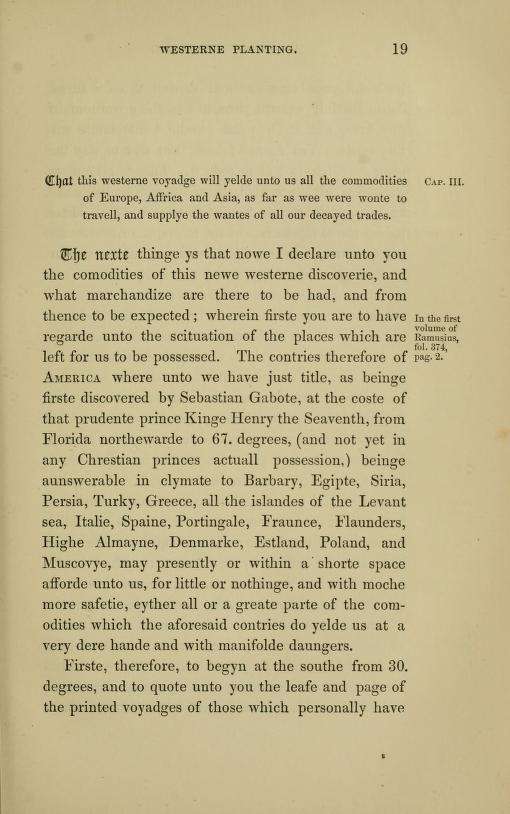 Documentary History of the State of Maine, Volume 2, Page 19

That this westerne voyadge will yelde unto us all the commodities of Europe, Affrica and Asia, as far as wee were wonte to travell, and supplye the wantes of all our decayed trades.

The nexte thinge ys that nowe I declare unto you the comodities of this newe westerne discoverie, and what marchandize are there to be had, and from thence to be expected; wherein firste you are to have regarde unto the scituation of the places which are left for us to be possessed.

Firste, therefore, to begyn at the southe from 30. degrees, and to quote unto you the leafe and page of the printed voyadges of those which personally have 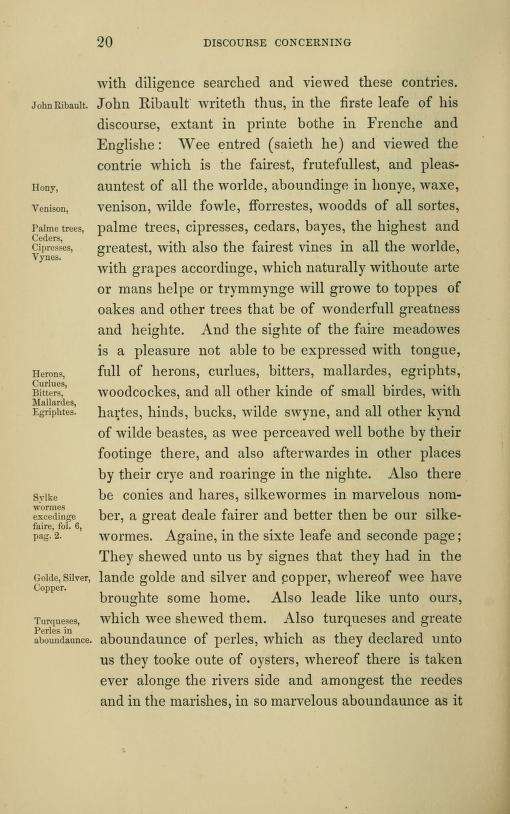 Documentary History of the State of Maine, Volume 2, Page 20

with diligence searched and viewed these contries. John Ribault writeth thus, in the firste leafe of his discourse, extant in printe bothe in Frenche and Englishe: Wee entred (saithe he) and viewed the contrie which is the fairest, frutefullest, and pleasauntest of all the worlde, aboundinge in honye, waxe, venison, wilde fowle, fforrestes, woodds of all sortes, palme trees, cipresses, cedars, bayes, the highest and greatest, with also the fairest vines in all the worlde, with grapes accordinge, which naturally withoute arte or mans helpe or trymmynge will growe to toppes of oakes and other trees that be of wonderfull greatness and heighte. And the sighte of the faire meadowes is a pleasure not able to be expressed with tongue, full of herons, curlues, bitters, mallardes, egriphts, woodcockes, and all other kinde of small birdes, with hartes, hinds, bucks, wilde swyne, and all other kynd of wilde beastes, as wee perceaved well bothe by their footinge there, and also afterwardes in other places by their crye and roaringe in the nighte. Also there be conies and hares, silkewormes in marvelous nomber, a great deale fairer and better then be our silkewormes. Againe, in the sixte leafe and seconde page; They shewed unto us by signes that they had in the lande golde and silver and copper, whereof wee have broughte some home. Also leade like unto ours, which wee shewed them. Also turqueses and greate aboundaunce of perles, which as they declared unto us they tooke oute of oysters, whereof there is taken ever alonge the rivers side and amongest the reedes and in the marishes, in so marvelous aboundaunce as it 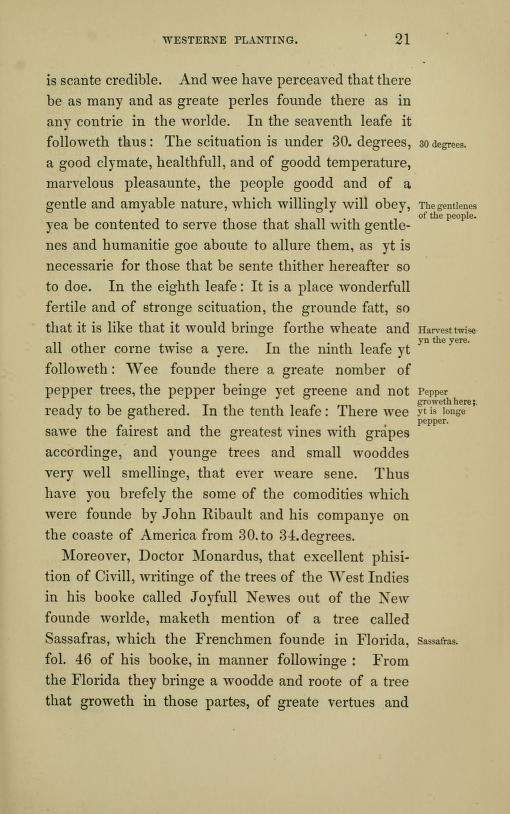 Documentary History of the State of Maine, Volume 2, Page 21

is scante credible. And wee have perceaved that there be as many and as greate perles founde there as in any contrie in the worlde. In the seaventh leafe it followeth thus: The scituation is under 30. degrees a good clymate, healthfull, and of goodd temperature, marvelous pleasaunte, the people goodd and of a gentle and amyable nature, which willingly will obey, yea be contented to serve those that shall with gentlenes and humanitie goe aboute to allure them, as yt is necessarie for those that be sente thither hereafter so to doe. In the eighth leafe: It is a place wonderfull fertile and of stronge scituation, the grounde fatt, so that it is like that it would bringe forthe wheate and all other corne twise a yere. In the ninth leafe yt followeth: Wee founde there a greate nomber of pepper trees, the pepper beinge yet greene and not ready to be gathered. In the tenth leafe: There wee sawe the fairest and the greatest vines with grapes accordinge, and younge trees and small wooddes very well smellinge, that ever weare sene. Thus have you brefely the some of the comodities which were founde by John Ribault and his companye on the coaste of America from 30. to 34. degrees. […]

RELATED CONTENT
Categories:
Type:
FURTHER READING
“All the knowen Seas”; an excerpt from The Principall Navigations, Voiages and Discoveries of the English Nation by Richard Hakluyt (the younger) (1589)
CITE THIS ENTRY