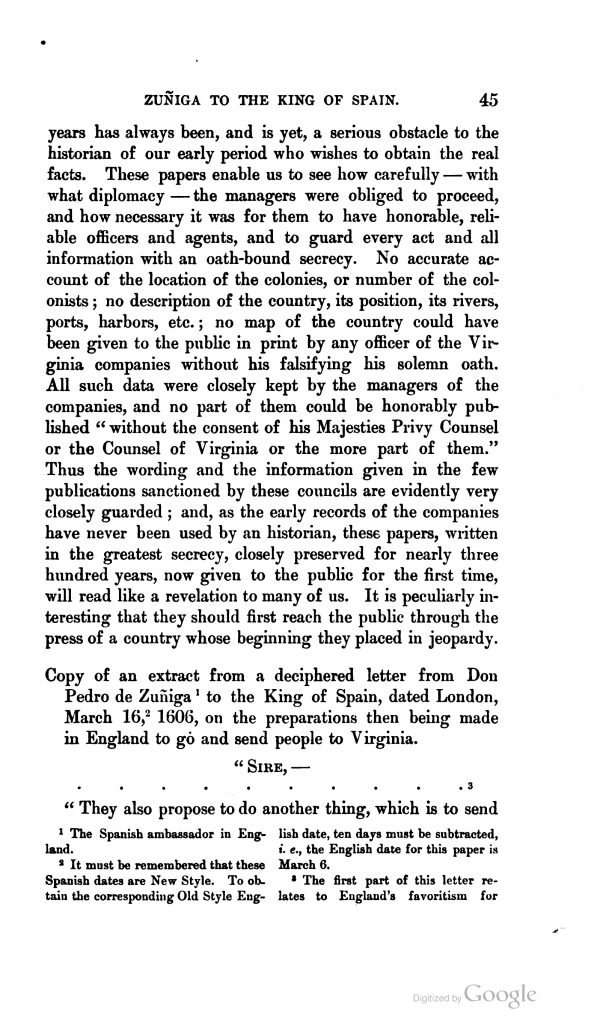 The Genesis of the United States, Volume 1, Page 45

They also propose to do another thing, which is to send 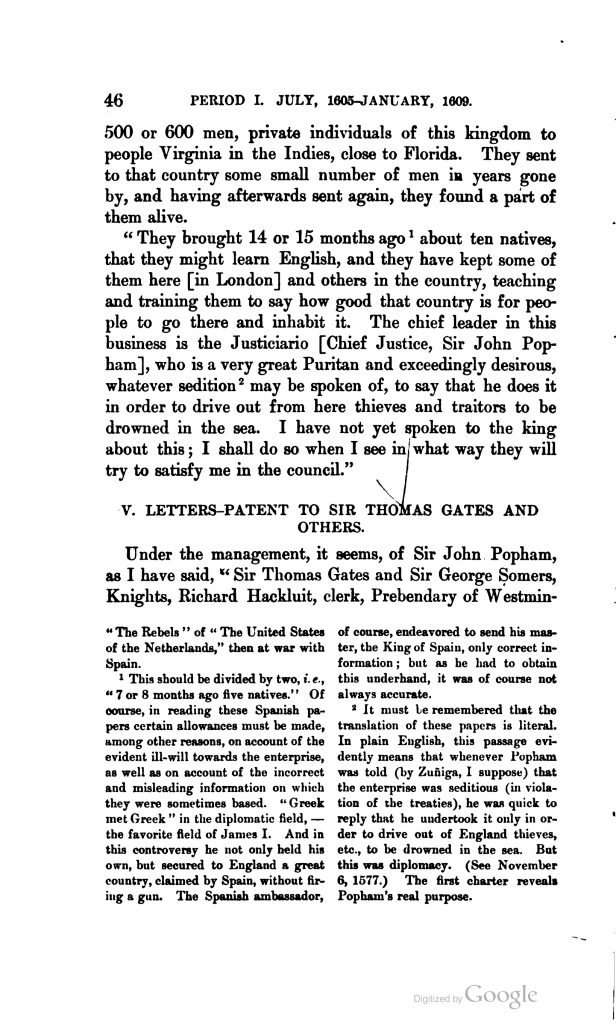 The Genesis of the United States, Volume 1, Page 46

500 or 600 men, private individuals of this kingdom to people Virginia in the Indies, close to Florida. They sent to that country some small number of men in years gone by, and having afterwards sent again, they found a part of them alive.

They brought 14 or 15 months ago about ten natives, that they might learn English, and they have kept some of them here [in London] and others in the country, teaching and training them to say how good that country is for people to go there and inhabit it. The chief leader in this business is the Justiciario [Chief Justice, Sir John Popham], who is a very great Puritan and exceedingly desirous, whatever sedition may be spoken of, to say that he does it in order to drive out from here thieves and traitors to be drowned in the sea. I have not yet spoken to the king about this; I shall do so when I see in what way they will try to satisfy me in the council. 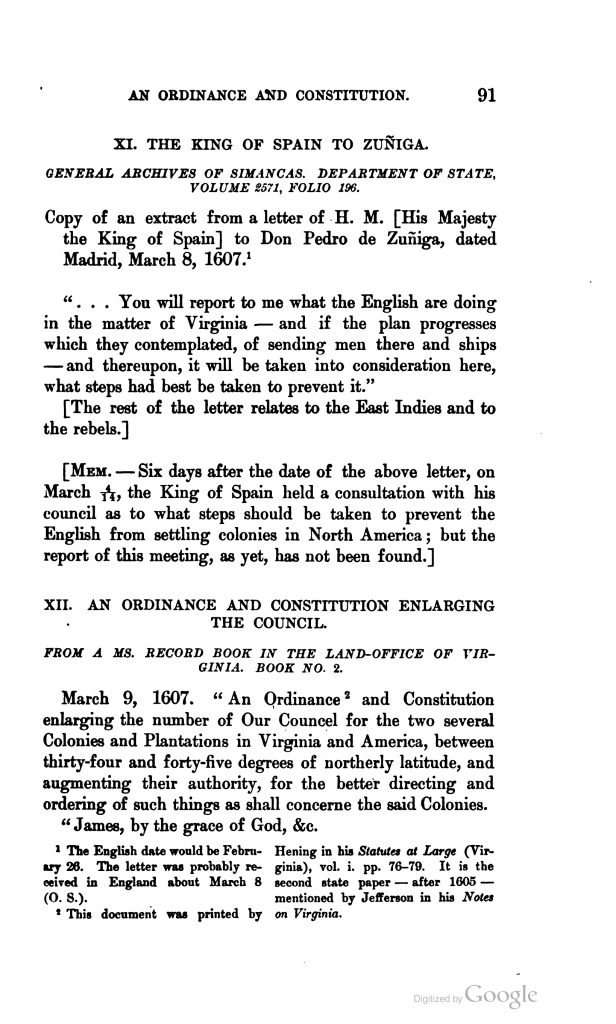 The Genesis of the United States, Volume 1, Page 91

[…] You will report to me what the English are doing in the matter of Virginia—and if the plan progresses which they contemplated, of sending men there and ships—and thereupon, it will be taken into consideration here, what steps had best be taken to prevent it. 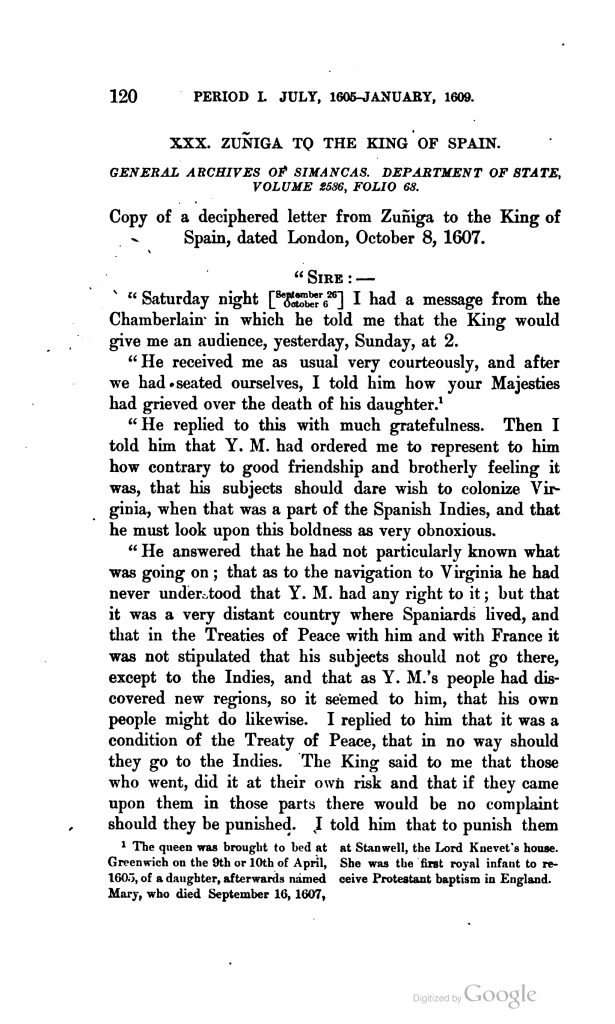 The Genesis of the United States, Volume 1, Page 120

Saturday night I had a message from the Chamberlain in which he told me that the King would give me an audience, yesterday, Sunday, at 2.

He received me as usual very courteously, and after we had seated ourselves, I told him how your Majesties had grieved over the death of his daughter.

He replied to this with much gratefulness. Then I told him that Y. M. had ordered me to represent to him how contrary to good friendship and brotherly feeling it was, that his subjects should dare wish to colonize Virginia, when that was a part of the Spanish Indies, and that he must look upon this boldness as very obnoxious.

He answered that he had not particularly known what was going on; that as to the navigation to Virginia he had never understood that Y. M. had any right to it; but that it was a very distant country where Spaniards lived, and that in the Treaties of Peace with him and with France it was not stipulated that his subjects should not go there, except to the Indies, and that as Y. M.’s people had discovered new regions, so it seemed to him, that his own people might do likewise. I replied to him that it was a condition of the Treaty of Peace, that in no way should they go to the Indies. The King said to me that those who went, did it at their own risk and that if they came upon them in those parts there would be no complaint should they be punished. I told him that to punish them 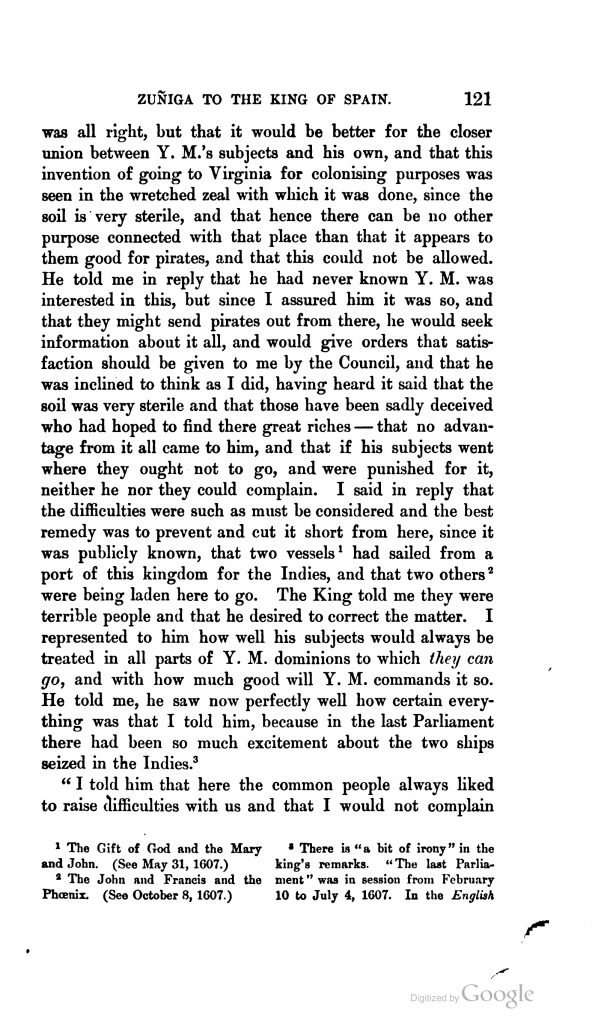 The Genesis of the United States, Volume 1, Page 121

was all right, but that it would be better for the closer union between Y. M.’s subjects and his own, and that this invention of going to Virginia for colonising purposes was seen in the wretched zeal with which it was done, since the soil is very sterile, and that hence there can be no other purpose connected with that place than that it appears to them good for pirates, and that this could not be allowed. He told me in reply that he had never known Y. M. was interested in this, but since I assured him it was so, and that they might send pirates out from there, he would seek information about it all, and would give orders that satisfaction should be given to me by the Council, and that he was inclined to think as I did, having heard it said that the soil was very sterile and that those have been sadly deceived who had hoped to find there great riches—that no advantage from it all came to him, and that if his subjects went where they ought not to go, and were punished for it, neither he nor they could complain. I said in reply that the difficulties were such as must be considered and the best remedy was to prevent and cut it short from here, since it was publicly known, that two vessels [the Gift of God and the Mary and John] had sailed from a port of this kingdom for the Indies, and that two others [the John and Francis and the Phoenix] were being laden here to go. The King told me they were terrible people and that he desired to correct the matter. I represented to him how well his subjects would always be treated in all parts of Y. M. dominions to which they can go, and with how much good will Y. M. commands it so. He told me, he saw now perfectly well how certain everything was that I told him, because in the last Parliament there had been so much excitement about the two ships seized in the Indies. 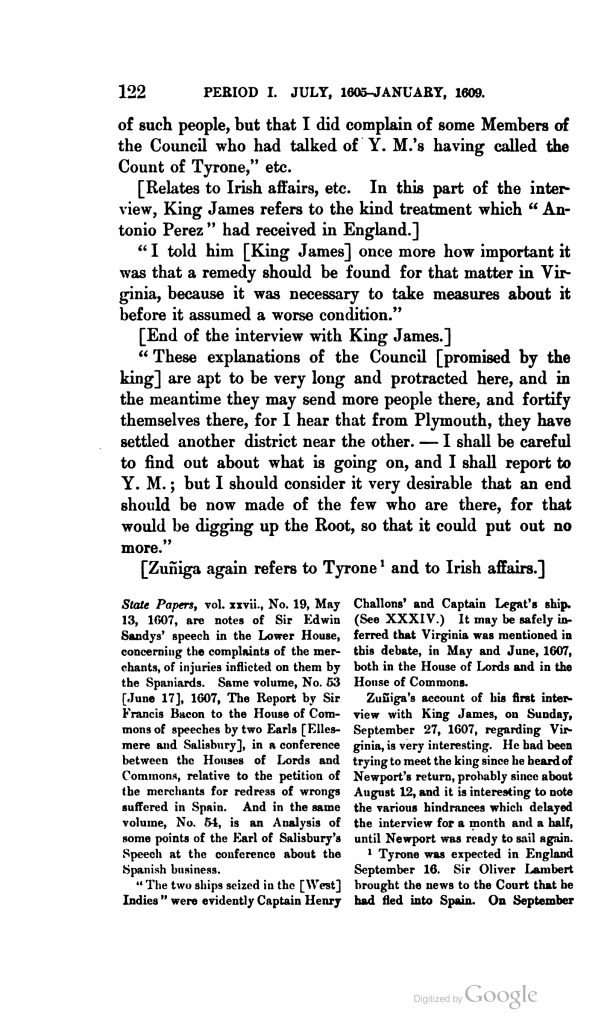 The Genesis of the United States, Volume 1, Page 122

of such people, but that I did complain of some Members of the Council who had talked of Y. M.’s having called the Count of Tyrone […]

I told him [King James] once more how important it was that a remedy should be found for that matter in Virginia, because it was necessary to take measures about it before it assumed a worse condition.

These explanations of the Council [promised by the king] are apt to be very long and protracted here, and in the meantime they may send more people there, and fortify themselves there, for I hear that from Plymouth, they have settled another district near the other.—I shall be careful to find out about what is going on, and I shall report to Y. M.; but I should consider it very desirable that an end should be now made of the few who are there, for that would be digging up the Root, so that it could put out no more […]

A servant of a merchant who is going to Spain on business, takes this letter in another letter for Doña Maria, so that Y. M. may know what is going on here 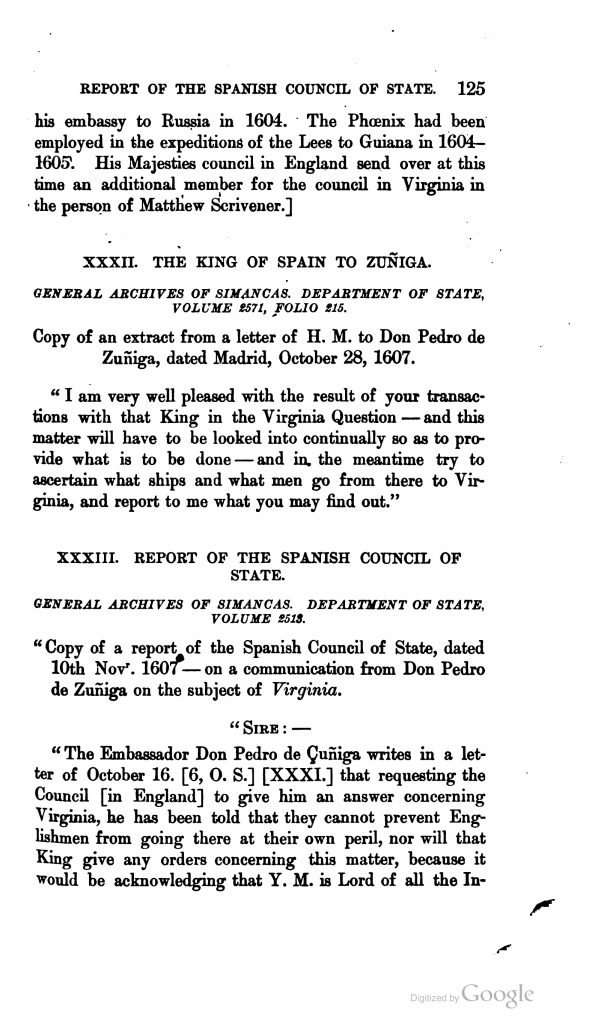 The Genesis of the United States, Volume 1, Page 125

I am very well pleased with the result of your transactions with that King in the Virginia Question—and this matter will have to be looked into continually so as to provide what is to be done—and in the meantime try to ascertain what ships and what men go from there to Virginia, and report to me what you may find out. 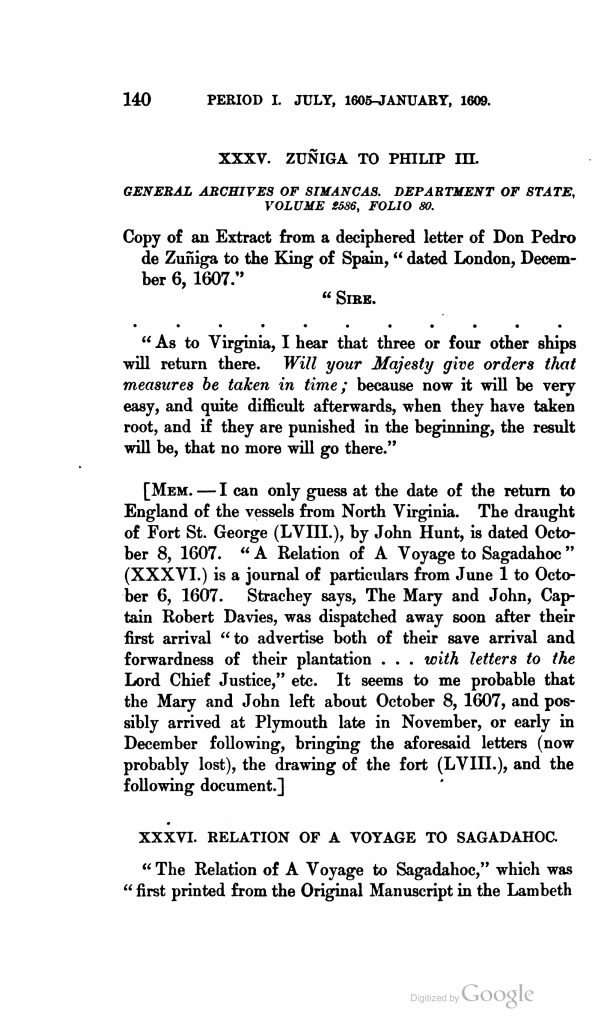 The Genesis of the United States, Volume 1, Page 140

As to Virginia, I hear that three or four other ships will return there. Will your Majesty give orders that measures be taken in time; because now it will be very easy, and quite difficult afterwards, when they have taken root, and if they are punished in the beginning, the result will be, that no more will go there. 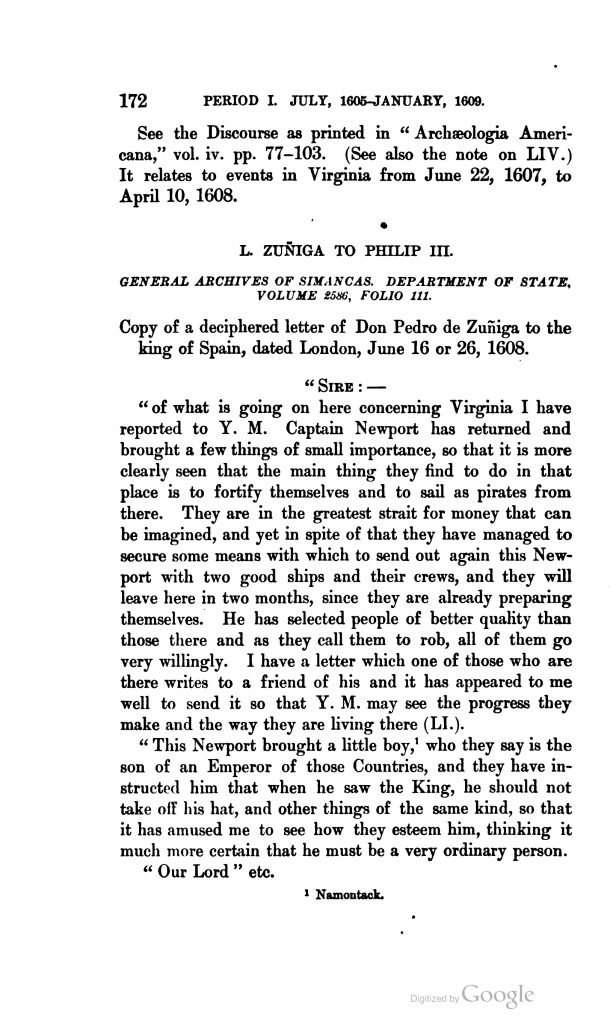 The Genesis of the United States, Volume 1, Page 172

of what is going on here concerning Virginia I have reported to Y. M. Captain Newport has returned and brought a few things of small importance, so that it is more clearly seen that the main thing they find to do in that place is to fortify themselves and to sail as pirates from there. They are in the greatest strait for money that can be imagined, and yet in spite of that they have managed to secure some means with which to send out again this Newport with two good ships and their crews, and they will leave here in two months, since they are already preparing themselves. He has selected people of better quality than those there and as they call them to rob, all of them go very willingly. I have a letter which one of those who are there writes to a friend of his and it has appeared to me well to send it so that Y. M. may see the progress they make and the way they are living there.

This Newport brought a little boy [the Virginia Indian named Namontack], who they say is the son of an Emperor of those Countries, and they have instructed him that when he saw the King, he should not take off his hat, and other things of the same kind, so that it has amused me to see how they esteem him, thinking it much more certain that he must be a very ordinary person. 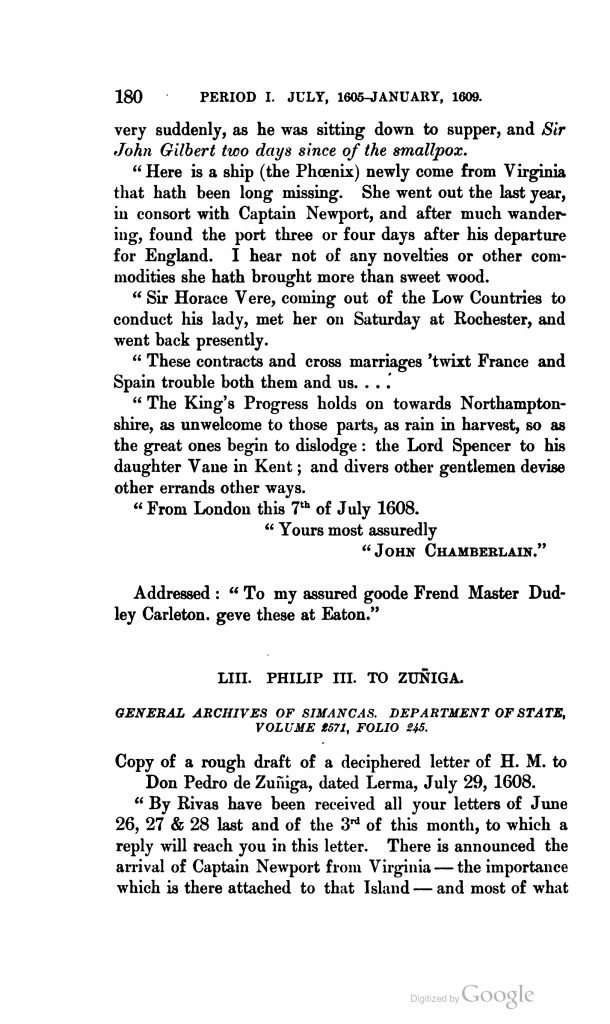 The Genesis of the United States, Volume 1, Page 180

By Rivas have been received all your letters of June 26, 27 & 28 last and of the 3rd of this month, to which a reply will reach you in this letter. There is announced the arrival of Captain Newport from Virginia—the importance which is there attached to that Island—and most of what 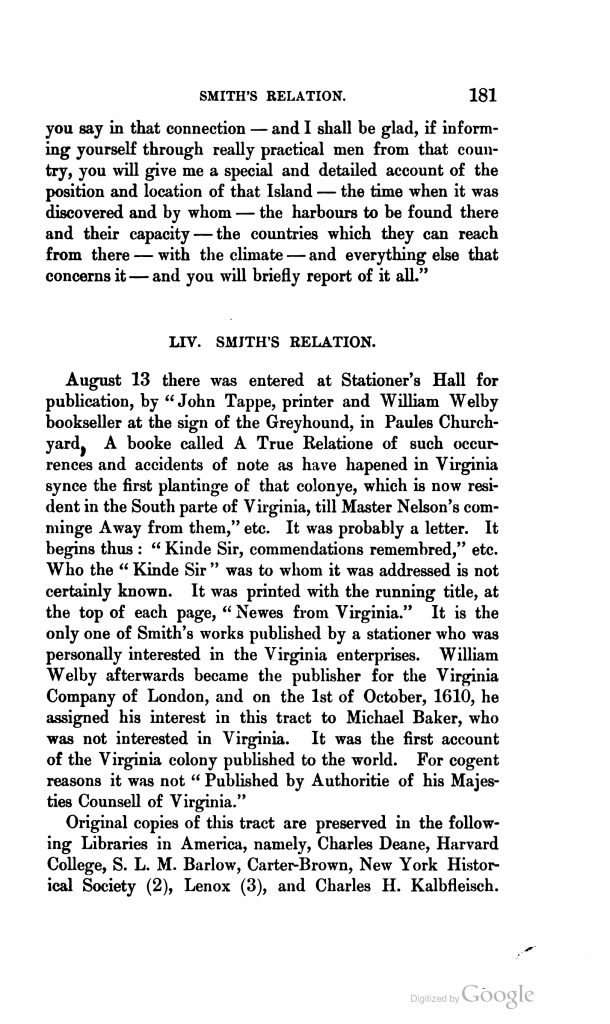 The Genesis of the United States, Volume 1, Page 181

you say in that connection—and I shall be glad, if informing yourself through really practical men from that country, you will give me a special and detailed account of the position and location of that Island—the time when it was discovered and by whom—the harbours to be found there and their capacity—the countries which they can reach from there—with the climate—and everything else that concerns it—and you will briefly report of it all. 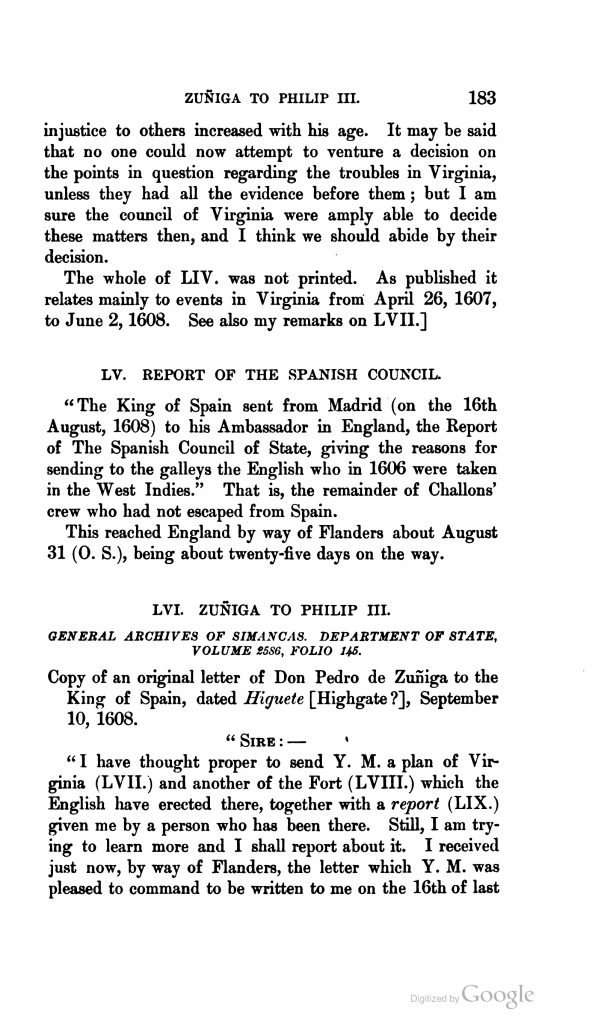 The Genesis of the United States, Volume 1, Page 183

I have thought proper to send Y. M. a plan of Virginia and another of the Fort which the English have erected there, together with a report given me by a person who has been there. Still, I am trying to learn more and I shall report about it. I received just now, by way of Flanders, the letter which Y. M. was pleased to command to be written to me on the 16th of last 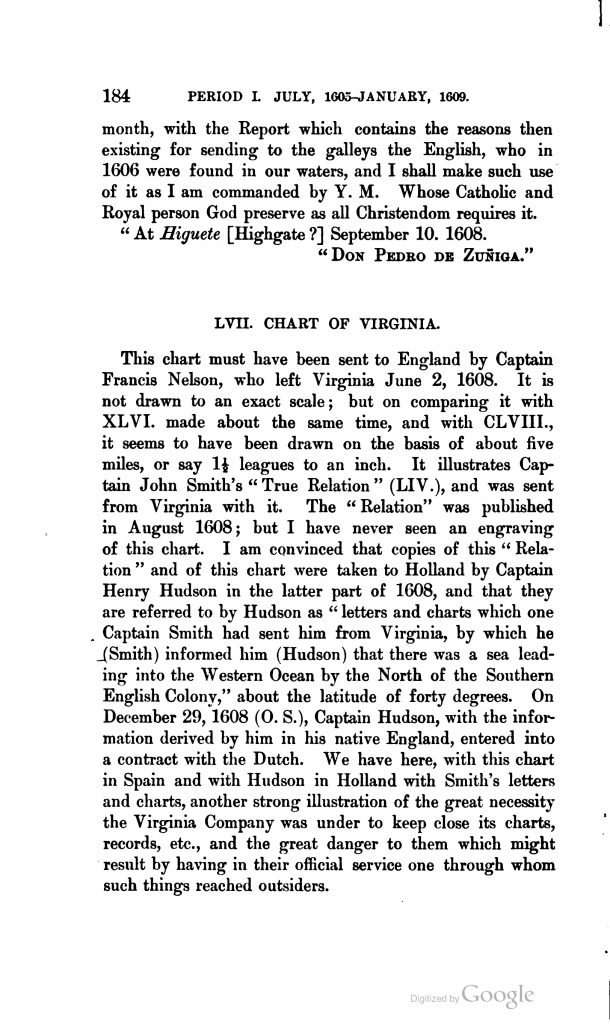 The Genesis of the United States, Volume 1, Page 184

month, with the Report which contains the reasons then existing for sending to the galleys the English, who in 1606 were found in our waters, and I shall make such use of it as I am commanded by Y. M. Whose Catholic and Royal person God preserve as all Christendom requires it. 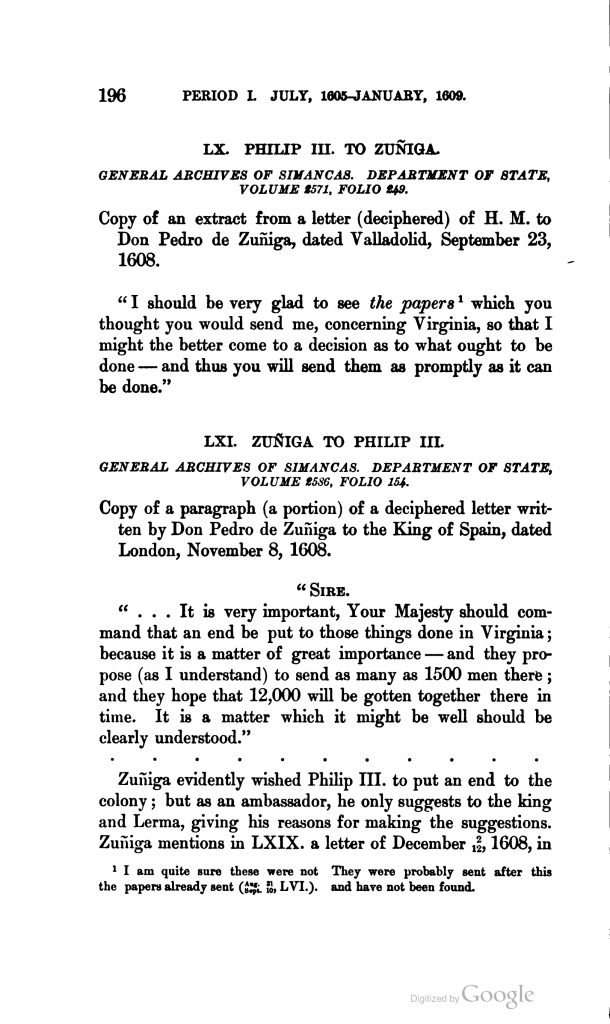 The Genesis of the United States, Volume 1, Page 196

[…] It is very important, Your Majesty should command that an end be put to those things done in Virginia; because it is a matter of great importance—and they propose (as I understand) to send as many as 1500 men there; and they hope that 12,000 will be gotten together there in time. It is a matter which it might be well should be clearly understood.