Skip to content
Author: George PercyTranscription Source: George Percy, “Observations gathered out of a Discourse of the Plantation of the Southerne Colonie in Virginia,” in Hakluytus Posthumus, or Purchas His Pilgrimes, compiled by Samuel Purchas (London: H. Fetherston, 1625) 4:1686-1689.
FULL TEXT 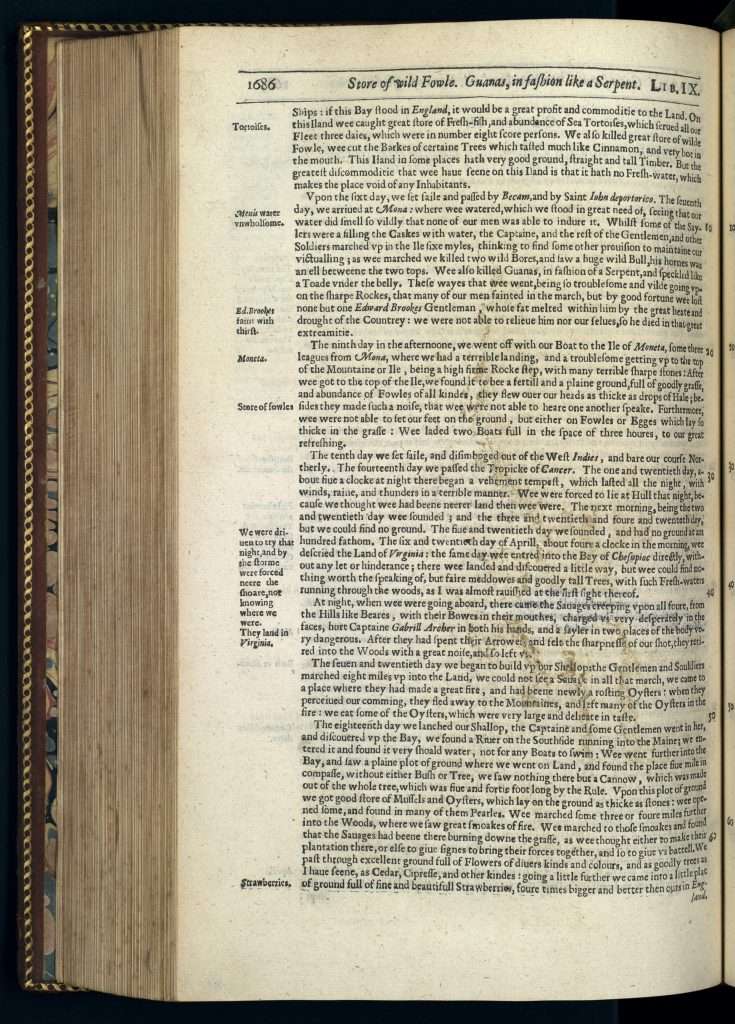 Arriving in Virginia; an excerpt from “Observations gathered out of a Discourse of the Plantation of the Southerne Colonie in Virginia” by George Percy (1625), Page 1686

[…] The six and twentieth day of Aprill, about foure a clocke in the morning, wee descried the Land of Virginia: the same day wee entred into the Bay of Chesupioc directly, without any let or hinderance; there wee landed and discovered a little way, but wee could find nothing worth the speaking of, but faire meddowes and goodly tall Trees, with such Fresh-waters running through the woods, as I was almost ravished at the first sight thereof.

At night, when wee were going aboard, there came the Savages creeping upon all foure, from the Hills like Beares, with their Bowes in their mouthes, charged us very desperately in the faces, hurt Captaine Gabrill Archer in both his hands, and a sayler in two places of the body very dangerous. After they had spent their Arrowes, and felt the sharpnesse of our shot, they retired into the Woods with a great noise, and so left us.

The seven and twentieth day we began to build up our Shallop: the Gentlemen and Souldiers marched eight miles up into the Land, we could not see a Savage in all that march, we came to a place where they had made a great fire, and had beene newly a rosting Oysters: when they perceived our comming, they fled away to the Mountaines, and left many of Oysters in the fire: we eat some of the Oysters, which were very large and delicate in taste.

The eighteenth day we lanched our Shallop, the Captaine and some Gentlemen went in her, and discovered up the Bay, we found a River on the Southside running into the Maine; we entered it and found it very shoald water, not for any Boats to swim: Wee went further into the Bay, and saw a plaine plot of ground where we went on Land, and found the place five mile in compasse, without either Bush or Tree, we saw nothing there but a Cannow, which was made out of the whole tree, which was five and fortie foot long by the Rule. Upon this plot of ground we got good store of Mussels and Oysters, which lay on the ground as thicke as stones: wee opened some, and found in many of them Pearles. Wee marched some three or foure miles further into the Woods, where we saw great smoakes of fire. Wee marched to those smoakes and found that the Savages had beene there burning downe the grasse, as wee thought either to make their plantation there, or else to give signes to bring their forces together, and so to give us battell. We past through excellent ground full of Flowers of divers kinds and colours, and as goodly trees as I have seene, as Cedar, Cipresse, and other kindes: going a little further we came into a little plat of ground full of fine and beautifull Strawberries, foure times bigger and better than ours in Eng- 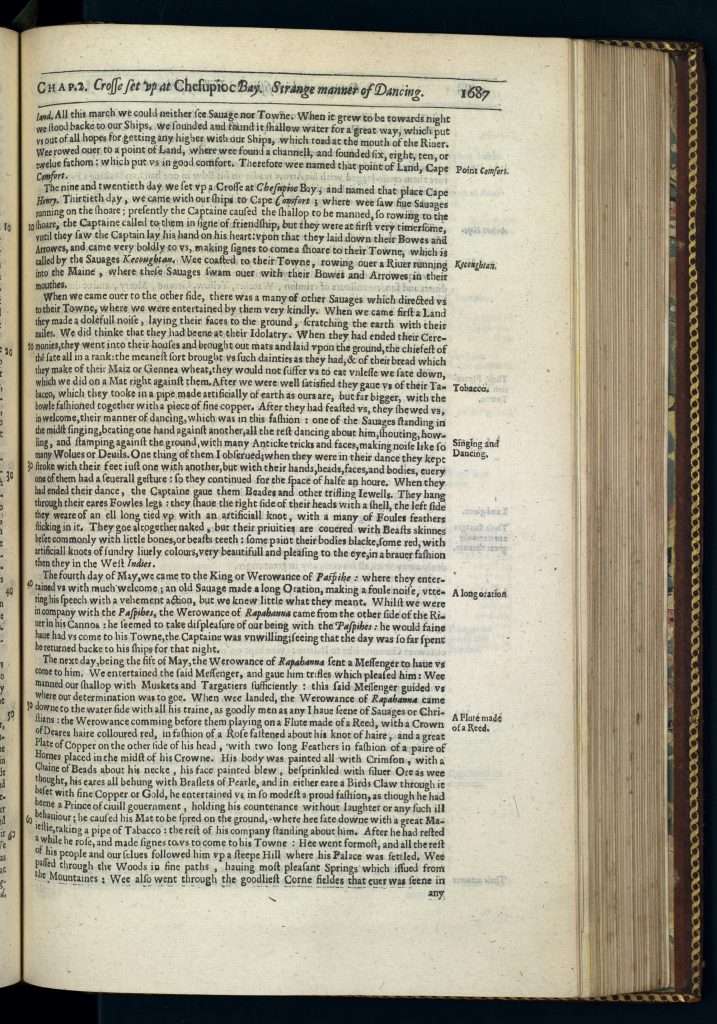 Arriving in Virginia; an excerpt from “Observations gathered out of a Discourse of the Plantation of the Southerne Colonie in Virginia” by George Percy (1625), Page 1687

land. All this march we could neither see Savage nor Towne. When it grew to be towards night we stood backe to our Ships, we sounded and found it shallow water for a great way, which put us out of all hopes for getting any higher with our Ships, which road at the mouth of the River. Wee rowed over to a point of Land, where wee found a channell, and sounded six, eight, ten or twelve fathom: which put us in good comfort. Therefore wee named that point of Land, Cape Comfort.

The nine and twentieth day we set up a Crosse at Chesupioc Bay, and named that place Cape Henry. Thirtieth day, we came with our ships to Cape Comfort; where we saw five Savages running on the shoare; presently the Captaine caused the shallop to be manned, so rowing to the shoare, the Captaine called to them in signe of friendship, but they were at first very timersome, until they saw the Captain lay his hand on his heart: upon that they laid down their Bowes and Arrowes, and came very boldly to us, making signes to come a shoare to their Towne, which is called by the Savages Kecoughtan. Wee coasted to their Towne, rowing over a River running into the Maine, where those Savages swam over with their Bowes and Arrowes in their mouthes.

When we came over to the other side, there was a many of other Savages which directed us to their Towne, where we were entertained by them very kindly. When we came first a Land they made a dolefull noise, laying their faces to the ground, scratching the earth with their nailes. We did thinke that they had beene at their Idolatry. When they had ended their Ceremonies, they went into their houses and brought out mats and laid upon the ground, the chiefest of them sate all in a rank: the meanest sort brought us such dainties as they had, & of their bread which they make of their Maiz or Gennea wheat, they would not suffer us to eat unlesse we sate down, which we did on a Mat right against them. After we were well satisfied they gave us their Tabacco, which they tooke in a pipe made artificially of earthe as ours are, but far bigger, with the bowle fashioned together with a piece of fine copper. After they had feasted us, they shewed us, in welcome, their manner of dancing, which was in this fashion: one of the Savages standing in the midst singing, beating one hand against another, all the rest dancing about him, shouting, howling, and stamping against the ground, with many Anticke tricks and faces, making noise like so many Wolves or Devils. One thing of them I observed; when they were in their dance they kept stroke with their feet just one with another, but with their hands, heads, faces, and bodies, every one of them had a severall gesture: so they continued for the space of halfe an houre. When they had ended their dance, the Captaine gave them Beades and other trifling Jewells. They hang through their eares Fowles legs: they shave the right side of their heads with a shell, the left side they weare of an ell long tied up with an artificall knot, with a many of Foules feathers sticking in it. They goe altogether naked, but their privities are covered with Beasts skinnes beset commonly with little bones, or beasts teeth: some paint their bodies blacke, some red, with artificall knots of sundry lively colours, very beautifull and pleasing to the eye, in a braver fashion then they in the West Indies.

The fourth day of May, we came to the King or Werowance of Paspihe: where they entertained us with much welcome; an old Savage made a long Oration, making a foule noise, uttering his speech with a vehement action, but we knew little what they meant. Whilst we were in company with the Paspihes, the Werowance of Rapahanna came from the other side of the River in his Cannoa: he seemed to take displeasure of our being with the Paspihes: he would faine have had us come to his Towne, the Captaine was unwilling; seeing that the day was so far spent he returned backe to his ships for that night.

The next day, being the fift of May, the Werowance of Rapahanna sent a Messenger to have us come to him. We entertained the said Messenger, and gave him trifles which pleased him: Wee manned our shallop with Muskets and Targatiers sufficiently: this said Messenger guided us where our determination was to goe. When wee landed, the Werowance of Rapahanna came downe to the water side with all his traine, as goodly men as any I have seene of Savages or Christians: the Werowance comming before the playing on a Flute made of a Reed, with a Crown of Deares haire colloured red, in fashion of a Rose fastened about his knot of haire, and a great Plate of Copper on the other side of his head, with two long Feathers in fashion of a paire of Hornes placed in the midst of his Crowne. His body was painted all with Crimson, with a Chaine of Beads about his necke, his face painted blew, besprinkled with silver Ore as wee thought, his eares all behung with Braslets of Pearle, and in either eare a Birds Claw through it beset with fine Copper or Gold, he entertained us in so modest a proud fashion, as though he had beene a Prince of civil government, holding his countenance without laughter or any such ill behaviour; he caused his Mat to be spred on the ground, where hee sate downe with a great Majestie, taking a pipe of Tabacco: the rest of his company standing about him. After he had rested a while he rose, and made signes to us to come to his Towne: Hee went formost, and all the rest of his people and our selves followed him up a steepe Hill where his Palace was settled. Wee passed through the Woods in fine paths, having most pleasant Springs which issued from the Mountaines: Wee also went through the goodliest Corne fields that ever was seene in 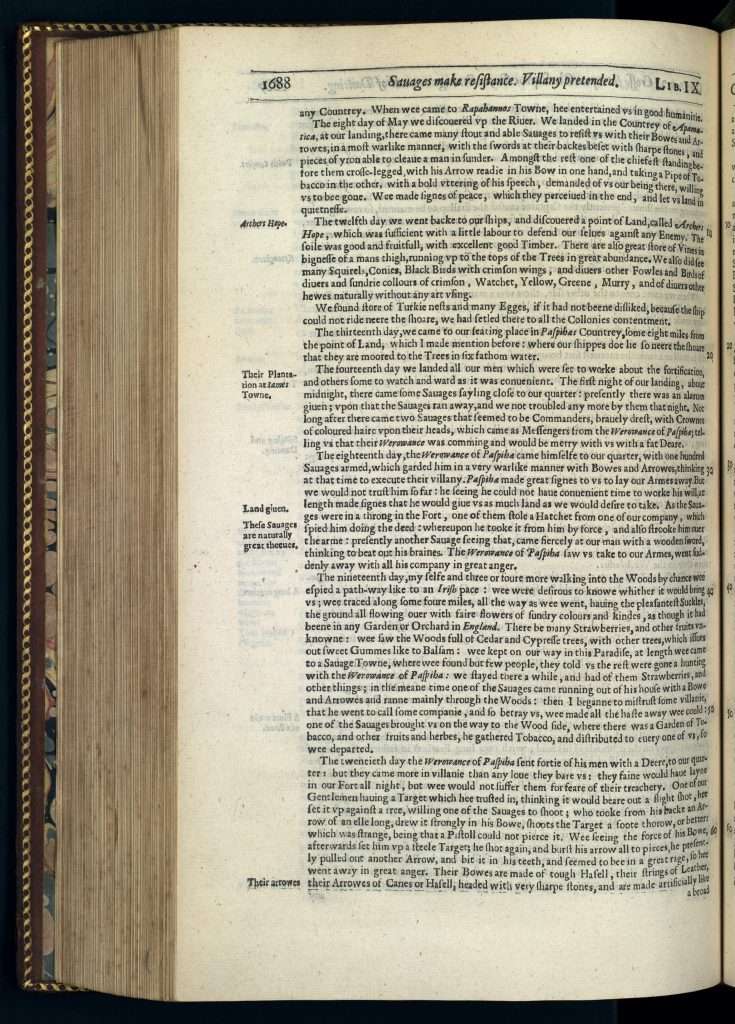 Arriving in Virginia; an excerpt from “Observations gathered out of a Discourse of the Plantation of the Southerne Colonie in Virginia” by George Percy (1625), Page 1688

any Countrey. When we came to the Rapahannos Towne, hee entertained us in good humanitie.

RELATED CONTENT
Categories:
Type:
MAP
TIMELINE
1625
George Percy's account of the early Jamestown settlement, "Observations Gathered Out of a Discourse of the Plantation of the Southerne Colonie in Virginia by the English," is published by Samuel Purchas in Hakluytus Posthumus, or Purchas His Pilgrimes.
FURTHER READING