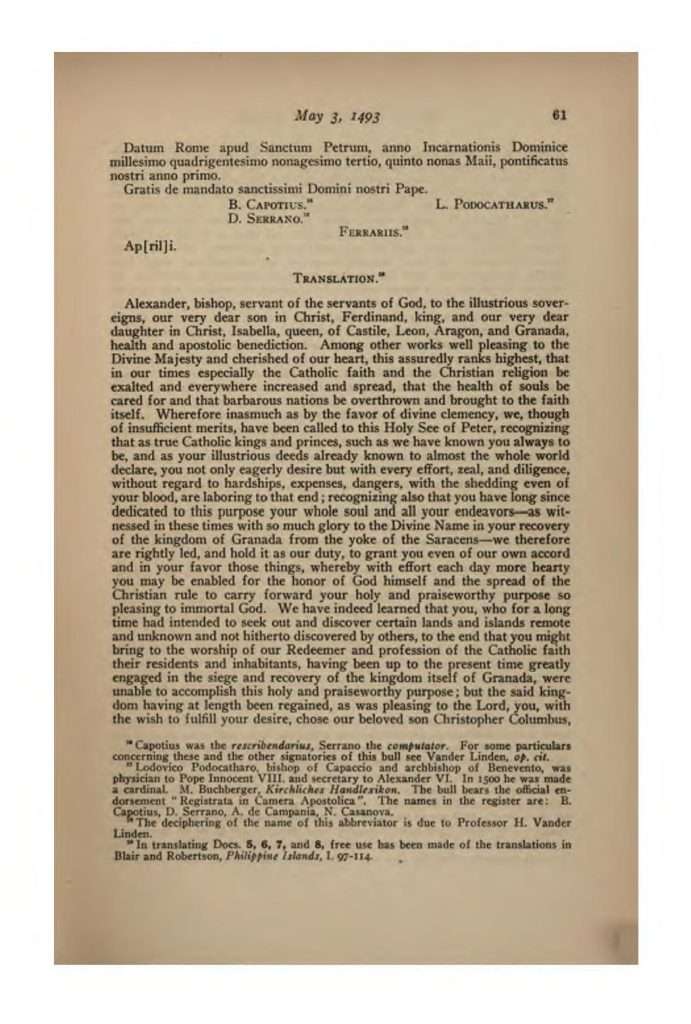 European Treaties bearing on the History of the United States and its Dependencies to 1648, Page 61

Alexander, bishop, servant of the servants of God, to the illustrious sovereigns, our very dear son in Christ, Ferdinand, king, and our very dear daughter in Christ, Isabella, queen of Castile, Leon, Aragon, and Granada, health and apostolic benediction. Among other works well pleasing to the Divine Majesty and cherished of our heart, this assuredly ranks highest, that in our times especially the Catholic faith and the Christian religion be exalted and everywhere increased and spread, that the health of souls be cared for and that barbarous nations be overthrown and brought to the faith itself. Wherefore inasmuch as by the favor of divine clemency, we, though of insufficient merits, have been called to this Holy See of Peter, recognizing that as true Catholic kings and princes, such as we have known you always to be, and as your illustrious deeds already known to almost the whole world declare, you not only eagerly desire but with every effort, zeal, and diligence, without regard to hardships, expenses, dangers, with the shedding even of your blood, are laboring to that end; recognizing also that you have long since dedicated to this purpose your whole soul and all your endeavors—as witnessed in these times with so much glory to the Divine Name in your recovery of the kingdom of Granada from the yoke of the Saracens—we therefore are rightly led, and hold it as our duty, to grant you even of our own accord and in your favor those things, whereby with effort each day more hearty you may be enabled for the honor of God himself and the spread of the Christian rule to carry forward your holy and praiseworthy purpose so pleasing to immortal God. We have indeed learned that you, who for a long time had intended to seek out and discover certain lands and islands remote and unknown and not hitherto discovered by others, to the end that you might bring to the worship of our Redeemer and profession of the Catholic faith their residents and inhabitants, having been up to the present time greatly engaged in the siege and recovery of the kingdom itself of Granada, were unable to accomplish this holy and praiseworthy purpose; but the said kingdom having at length been regained, as was pleasing to the Lord, you, with the wish to fulfill your desire, chose our beloved son, Christopher Columbus, 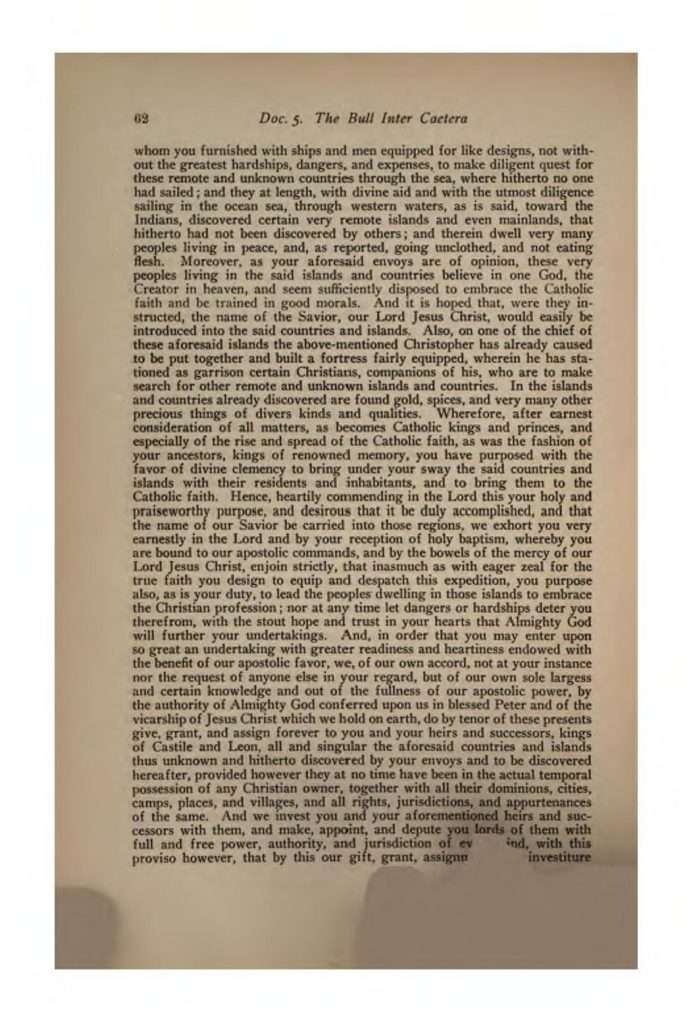 European Treaties bearing on the History of the United States and its Dependencies to 1648, Page 62

whom you furnished with ships and men equipped for like designs, not without the greatest hardships, dangers, and expenses, to make diligent quest for these remote and unknown countries through the sea, where hitherto no one had sailed; and they at length, with divine aid and with the utmost diligence sailing in the ocean sea, discovered certain very remote islands and even mainlands, that hitherto had not been discovered by others; and therein dwell very many peoples living in peace, and, as reported, going unclothed, and not eating flesh. Moreover, as your aforesaid envoys are of opinion, these very peoples living in the said islands and countries believe in one God, the Creator in heaven, and seem sufficiently disposed to embrace the Catholic faith and be trained in good morals. And it is hoped that, were they instructed, the name of the Savior, our Lord Jesus Christ, would easily be introduced into the said countries and islands. Also, on one of the chief of these aforesaid islands the above-mentioned Christopher has already caused to be put together and built a fortress fairly equipped, wherein he has stationed as garrison certain Christians, companions of his, who are to make search for other remote and unknown islands and countries. In the islands and countries already discovered are found gold, spices, and very many other precious things of divers kinds and qualities. Wherefore, after earnest consideration of all matters, as becomes Catholic kings and princes, and especially of the rise and spread of the Catholic faith, as was the fashion of your ancestors, kings of renowned memory, you have purposed with the favor of divine clemency to bring under your sway the said countries and islands with their residents and inhabitants, and to bring them to the Catholic faith. Hence, heartily commending in the Lord this your holy and praiseworthy purpose, and desirous that it be duly accomplished, and that the name of our Savior be carried into those regions, we exhort you very earnestly in the Lord and by your reception of holy baptism, whereby you are bound to our apostolic commands, and by the bowels of the mercy of our Lord Jesus Christ, enjoy strictly, that inasmuch as with eager zeal for the true faith you design to equip and despatch this expedition, you purpose also, as is your duty, to lead the peoples dwelling in those islands to embrace the Christian profession; nor at any time let dangers or hardships deter you therefrom, with the stout hope and trust in your hearts that Almighty God will further your undertakings. And, in order that you may enter upon so great an undertaking with greater readiness and heartiness endowed with benefit of our apostolic favor, we, of our own accord, not at your instance nor the request of anyone else in your regard, but of our own sole largess and certain knowledge and out of the fullness of our apostolic power, by the authority of Almighty God conferred upon us in blessed Peter and of the vicarship of Jesus Christ which we hold on earth, do by tenor of these presents, should any of said islands have been found by your envoys and captains, give, grant, and assign forever to you and your heirs and successors, kings of Castile and Leon, all and singular the aforesaid countries and islands thus unknown and hitherto discovered by your envoys and to be discovered hereafter, provided however they at no time have been in the actual temporal possession of any Christian owner, together with all their dominions, cities, camps, places, and villages, and all rights, jurisdictions, and appurtenances of the same. And we invest you and your aforementioned heirs and successors with them, and make, appoint, and depute you lords of them with full and free power, authority, and jurisdiction of every kind, with this proviso however, that by this our gift, grant, assignment, and investiture 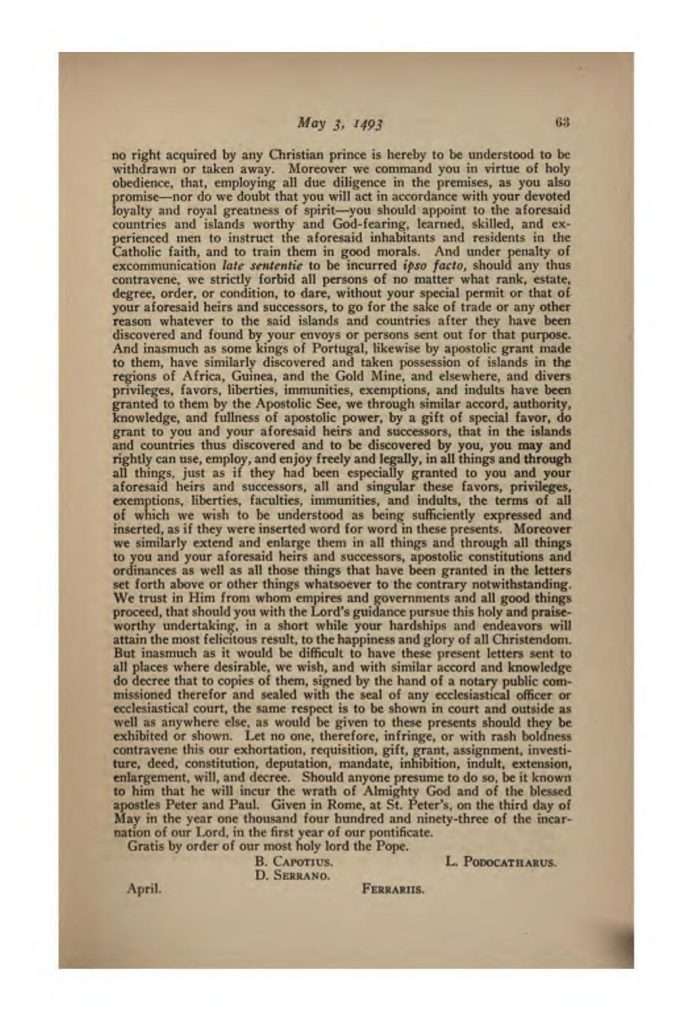 European Treaties bearing on the History of the United States and its Dependencies to 1648, Page 63

no right acquired by any Christian prince is hereby to be understood to be withdrawn or taken away. Moreover we command you in virtue of holy obedience, that, employing all due diligence in the premises, as you also promise—nor do we doubt that you will act in accordance with your devoted loyalty and royal greatness of spirit—you should appoint to the aforesaid countries and islands worthy God-fearing, learned, skilled, and experienced men, in order to instruct the aforesaid inhabitants and residents in the Catholic faith and train them in good morals. And under penalty of excommunication late sententie to be incurred ipso facto, should any thus contravene, we strictly forbid all persons of no matter what rank, estate, degree, order, or condition, to dare, without your special permit or that of your aforesaid heirs and successors, to go for the sake of trade or any other reason whatever to the islands and countries after they have been discovered and found by your envoys or persons sent out for that purpose. And inasmuch as some kings of Portugal, likewise by apostolic grant made to them, have similarly discovered and taken possession of islands in the regions of Africa, Guinea, and the Gold Mine, and elsewhere, and divers privileges, favors, liberties, immunities, exemptions, and indults have been granted to them by the Apostolic See, we through similar accord, authority, knowledge, and fullness of apostolic power, by a gift of special favor, do grant to you and your aforesaid heirs and successors, that in the islands and countries thus discovered and to be discovered by you, you may and rightly can use, employ, and enjoy freely and legally, in all things and through all things, just as if they had been especially granted to you and your aforesaid heirs and successors, all and singular these favors, privileges, exemptions, liberties, faculties, immunities, and indults, the terms of all of which we wish to be understood as being sufficiently expressed and inserted, as if they were inserted word for word in these presents. Moreover we similarly extend and enlarge them in all things and though all things to you and your aforesaid heirs and successors, apostolic constitutions and ordinances as well as those things which have been granted in the letters set forth above or other things whatsoever to the contrary notwithstanding. We trust in Him from whom empires and governments and all good things proceed, that should you with the Lord’s guidance, pursue this holy and praiseworthy undertaking, in a short while your hardships and endeavors will attain the most felicitous result, to the happiness and glory of all Christendom. But inasmuch as it would be difficult to have these present letters sent to all places where desirable, we wish, and with similar accord and knowledge do decree, that to copies of them, signed by the hand of a notary public commissioned therefor and sealed with the seal of any ecclesiastical officer or ecclesiastical court, the same respect is to be shown in court and outside as well as anywhere else, as would be given to these presents should they be exhibited or shown. Let no one, therefore, infringe, or with rash boldness contravene this our exhortation, requisition, gift, grant, assignment, investiture, deed, constitution, deputation, mandate, inhibition, indult, extension, enlargement, will, and decree. Should anyone presume to do so, be it known to him that he will incur the wrath of Almighty God and of the blessed apostles Peter and Paul. Given in Rome, at St. Peter’s, on the third day of May in the year one thousand four hundred and ninety-three of the incarnation of our Lord, in the first year of our pontificate.

Gratis by order of our holy lord the Pope.

RELATED CONTENT
Categories:
Type:
MAP
TIMELINE
May 3, 1493
Pope Alexander VI issues a bull, Inter caetera, that decrees that all newly discovered lands west of a line of longitude running through the eastern part of present-day Brazil belong to Spain, and everything east to Portugal.
FURTHER READING

Mundus novus (1503) El Requerimiento by Juan López de Palacios Rubios (1513) “The natives are white men”; an excerpt from De Orbe Novo by Peter Martyr d’Anghiera (1530) The Healers; an excerpt from La Relación by Álvar Núñez Cabeza de Vaca (1542) The Black Legend; an excerpt from A Brief Account of the Destruction of the Indies by Bartolomé de las Casas (1552) The Story of Juan Ortiz; an excerpt from The Discovery and Conquest of Terra Florida by a Gentleman of Elvas (1557) The Story of Marguerite de La Roque; an excerpt from The Heptameron of Margaret, Queen of Navarre by Marguerite de Navarre (1558) The Story of Guillaume Rouffi; an excerpt from Relación e información de los Franceses by Hernando de Manrique de Rojas (July 9, 1564) “The people of America crye oute unto us”; an excerpt from Discourse on Western Planting by Richard Hakluyt (the younger) (1584) John White Returns to Roanoke; an excerpt from “The fift voyage of Master John White into the West Indies and parts of America called Virginia, in the yeere 1590” (1600) Relation of Juan de la Carrera (March 1, 1600) Letters between King Philip III and Don Pedro de Zúñiga (1607–1608) Letters between King Philip III and Don Pedro de Zúñiga (1609–1610) “In wishing him well, he killed him”; excerpt from Relation of Juan Rogel (ca. 1611) Arriving in Virginia; an excerpt from “Observations gathered out of a Discourse of the Plantation of the Southerne Colonie in Virginia” by George Percy (1625)