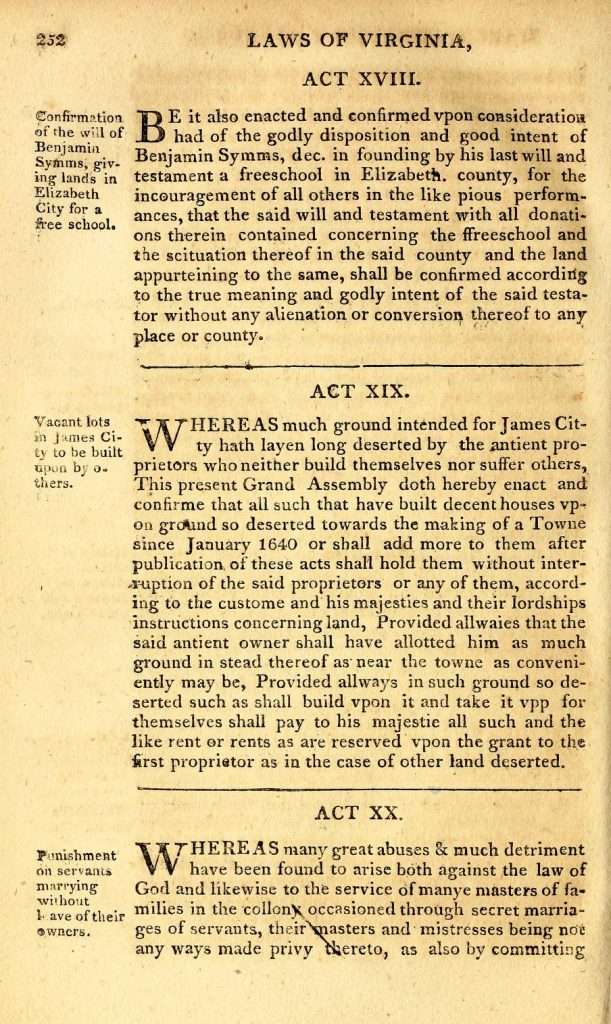 WHEREAS many great abuses & much detriment have been found to arise both against the law of God and likewise to the service of manye masters of families in the collony occasioned through secret marriages of servants, their masters and mistresses being not any ways made privy thereto, as also by committing 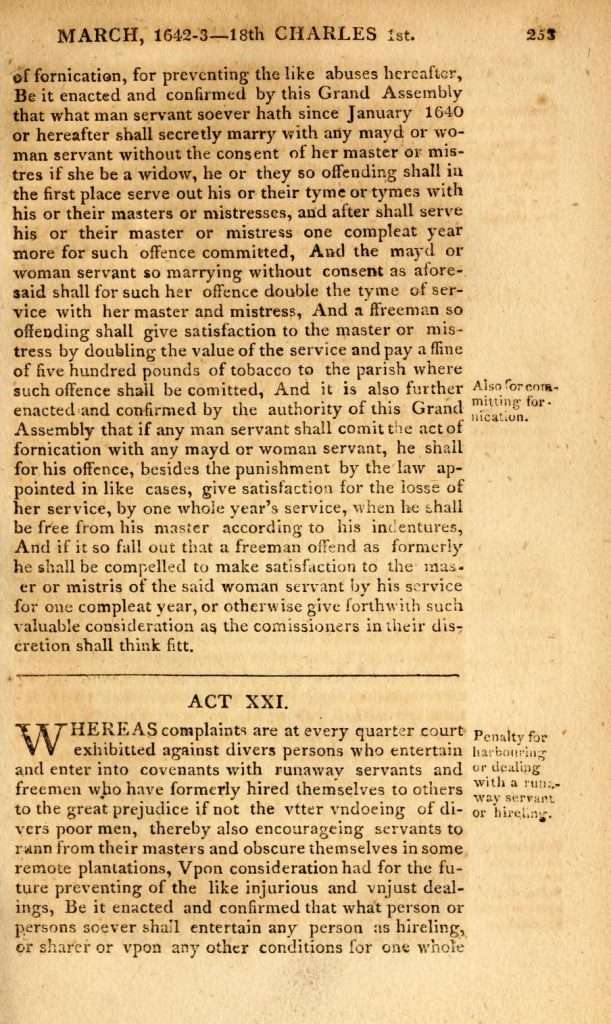 of fornication, for preventing the like abuses hereafter, Be it enacted and confirmed by this Grand Assembly that what man servant soever hath since January 1640 or hereafter shall secretly marry with any mayd or woman servant without the consent of her master or mistres if she be a widow, he or they so offending shall in the first place serve out his or their tyme or tymes with his or their masters or mistresses, and after shall serve his or their master or mistress one compleat year more for such offence committed, And the mayd or woman servant so marrying without consent as aforesaid shall for such her offence double the tyme of service with her master and mistress, And a ffreeman so offending shall give satisfaction to the master or mistress by doubling the value of the service and pay a ffine of five hundred pounds of tobacco to the parish where such offence shal be comitted, And it is also further enacted and confirmed by the authority of this Grand Assembly that if any man servant shal comit the act of fornication with any mayd or woman servant, he shall for his offence, besides the punishment by the law appointed in like cases, give satisfaction for the losse of her service, by one whole year’s service, when he shall be free from his master according to his indentures, And if it so fall out that a freeman offend, as formerly he shall be compelled to make satisfaction to the master or mistris of the said woman servant by his service for one compleat year, or otherwise give forthwith such valuable consideration as the comissioners in their discretion shall think fitt.

RELATED CONTENT
Categories:
Type:
MAP
TIMELINE
1642
The General Assembly passes the "Law Regulating Marriage of Indentured Servants," to address the problem of indentured servants having children and marrying by providing compensation to masters whose women servants' labor was lost during pregnancy and marriage.
FURTHER READING

“An Acte towching dyvers Orders for Artificers Laborers Servantes of Husbandrye and Apprentises” (1563) Laws Concerning Indentured Servants (1619) Law Regulating Indentured Servants (1642–1643) Law Prohibiting Indentured Servants from Hiring Themselves Out (1643) Irish Servants (1654) “Concerning Hireing of Servants” (1657–1658) “Concerning secret Marriages” (1657–1658) “How long Servants without Indentures shall Serve” (1658) “An Act for repealing an Act for Irish Servants” (1659) “Against ffornication” (1661–1662) “Women servants gott with child by their masters after their time expired to be sold by the Churchwardens for two yeares for the good of the parish” (1662) “Man Servants getting any bastard child to make satisfaction to the parish after their service ended” (1662) “Women servants whose common imployment is working in the ground to be accompted tythable” (1662) “An act for the more effectuall suppressing the severall sins and offences of swaring, cursing, profaineing Gods holy name, Sabbath abuseing, drunkenness, ffornication, and adultery” (1691) “An act for punishment of ffornication and seaverall other sins and offences” (1696)