DONATE
Author: General AssemblyTranscription Source: William Waller Hening, ed., The Statutes at Large; Being a Collection of All the Laws of Virginia from the First Session of the Legislature in the Year 1619 (New York: R. & W. & G. Bartow, 1823), 1:439.
FULL TEXT 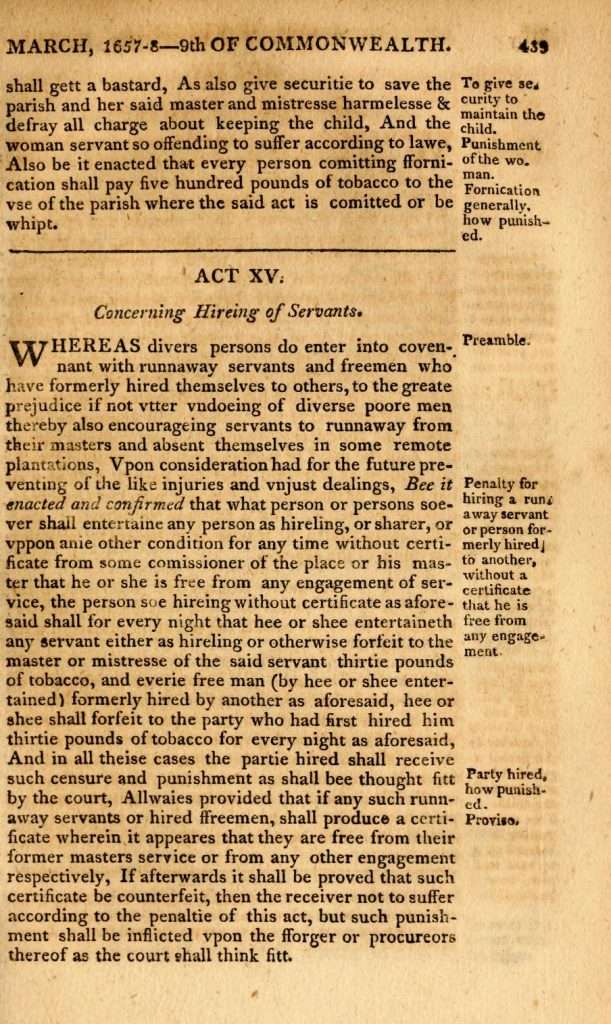 WHEREAS divers persons do enter into covenant with runnaway servants and freemen who have formerly hired themselves to others, to the greate prejudice if not utter undoeing of diverse poore men, thereby also encourageing servants to runnaway from their masters and absent themselves in some remote plantations, Upon consideration had for the future preventing of the like injurious and unjust dealings, Be it enacted and confirmed that what person or persons soever shall entertaine any person as hireling, or sharer, or uppon anie other condition for any time without certificate from some comissioner of the place or his master that he or she is free from any engagement of service, the person soe hireing without such certificate as aforesaid shall for every night that hee or shee entertaineth any servant either as hireling or otherwise forfeit to the master or mistresse of the said servant thirtie pounds of tobacco, and everie free man (by hee or shee entertained) formerly hired by another as aforesaid, hee or shee shal forfeit to the party who had first hired him thirtie pounds of tobacco for every night as aforesaid, And in all theise cases the partie hired shall receive such censure and punishment as shall bee thought fitt by the court, Allwaies provided that if any such runnaway servants or hired ffreemen, shall produce a certificate wherein it appeares that they are free from their former masters service or from any other engagement respectively, If afterwards it shall be proved that such certificate be counterfeit, then the receiver not to suffer according to the penaltie of this act, but such punishment shall be inflicted upon the fforger or procureors thereof as the court shall think fitt.

“An Acte towching dyvers Orders for Artificers Laborers Servantes of Husbandrye and Apprentises” (1563) Laws Concerning Indentured Servants (1619) Law Regulating Indentured Servants (1642–1643) Law Regulating Marriage of Indentured Servants (1642–1643) Law Prohibiting Indentured Servants from Hiring Themselves Out (1642–1643) Irish Servants (1654) “Concerning secret Marriages” (1657–1658) “How long Servants without Indentures shall Serve” (1657–1658) “An Act for repealing an Act for Irish Servants” (1659) “Against ffornication” (1661–1662) “Women servants gott with child by their masters after their time expired to be sold by the Churchwardens for two yeares for the good of the parish” (1662) “Man Servants getting any bastard child to make satisfaction to the parish after their service ended” (1662) “Women servants whose common imployment is working in the ground to be accompted tythable” (1662) “An act for the more effectuall suppressing the severall sins and offences of swaring, cursing, profaineing Gods holy name, Sabbath abuseing, drunkenness, ffornication, and adultery” (1691) “An act for punishment of ffornication and seaverall other sins and offences” (1696)