Skip to content
Author: General AssemblyTranscription Source: William Waller Hening, ed., The Statutes at Large; Being a Collection of All the Laws of Virginia from the First Session of the Legislature in the Year 1619 (Philadelphia: Thomas Desilver, 1823), 3:137–140.
FULL TEXT
— page 137 — 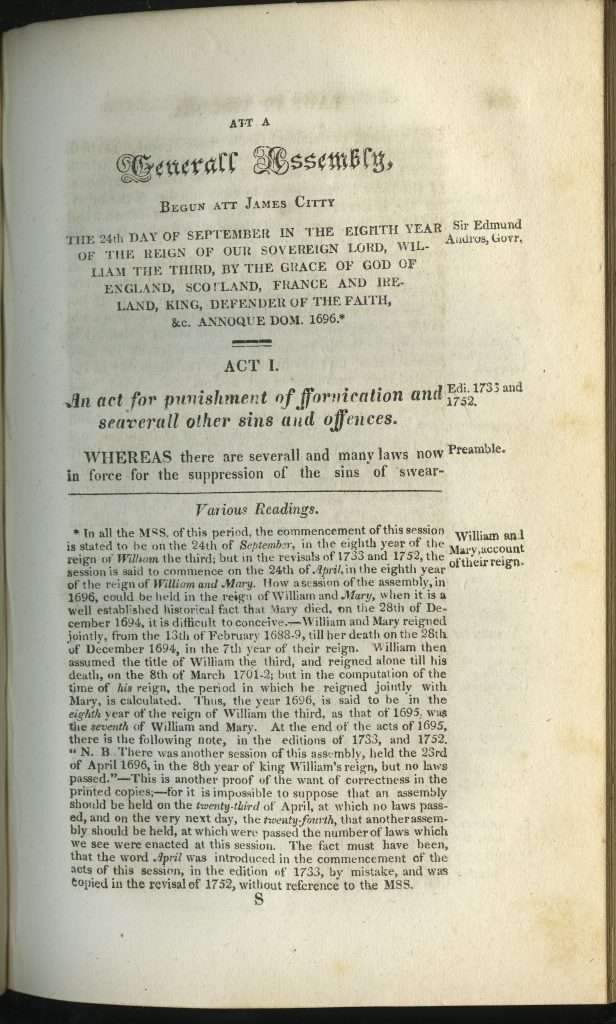 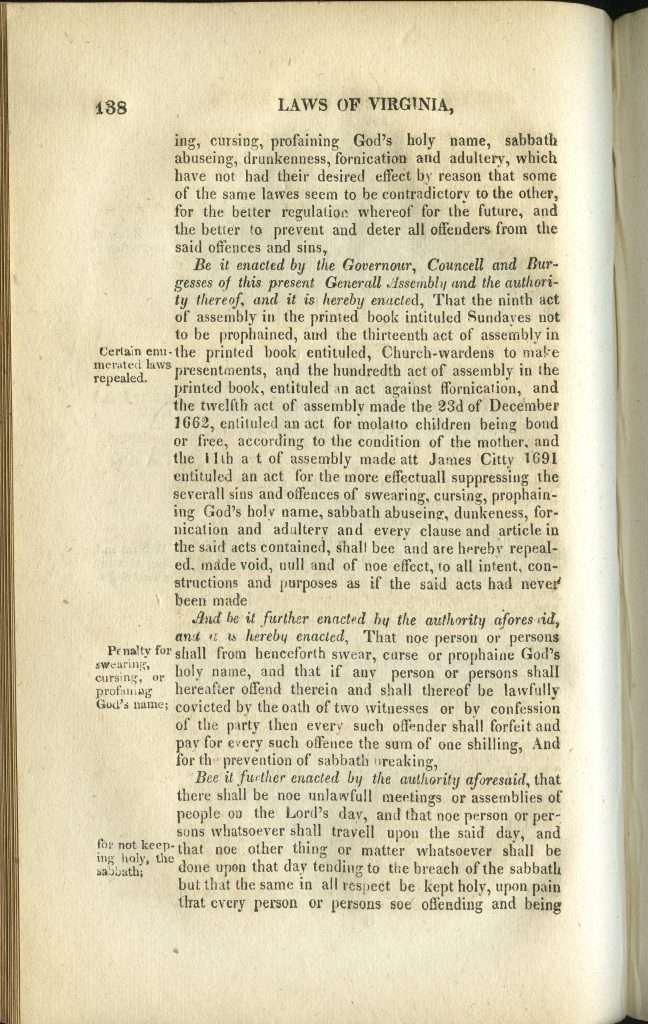 ing, cursing, profaining God’s holy name, sabbath abuseing, drunkenness, fornication and adultery, which have not had their desired effect or reason that some of the same lawes seem to be contradictory to the other for the better regulation whereof for the future, and the better to prevent and deter all offenders from the said offences and sins,

And be it further enacted by the authority aforesaid and it is hereby enacted, That noe person or persons shall from henceforth swear, curse or prophaine God’s holy name, and that if any person or persons shall hereafter offend therein and shall thereof be lawfully covicted by the oath of two witnesses or by confession of the party then every such offender shall forfeit and pay for every such offence the sum of one shilling, And for the prevention of sabbath breaking,

Bee it further enacted by the authority aforesaid, that there shall be noe unlawfull meetings or assemblies of people on the Lord’s day, and that noe person or persons whatsoever shall travell upon the said day, and that noe other thing or matter whatsoever shall be done upon that day tending to the breach of the sabbath but that the same in all respect be kept holy, upon pain that every person or persons soe offending and being 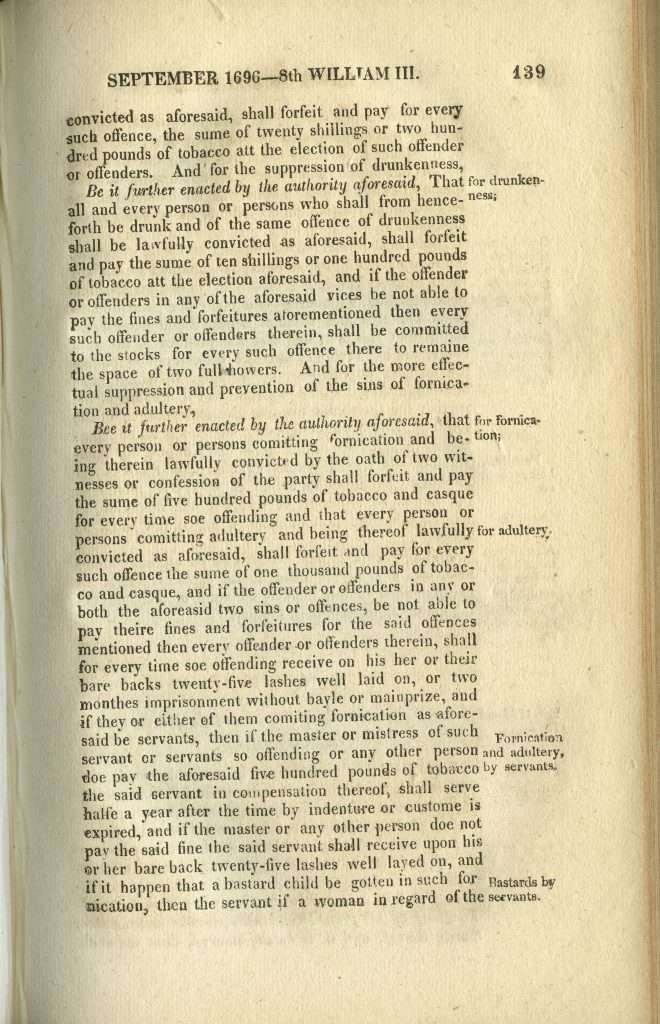 convicted as aforesaid, shall forfeit and pay for every such offence, the sume of twenty shillings or two hundred pounds of tobacco att the election of such offender or offenders. And for the suppression of drunkenness,

Be it further enacted by the authority aforesaid, That all and every person or persons who shall from henceforth be drunk and of the same offence of drunkenness shall be lawfully convicted as aforesaid, shall forfeit and pay the sume of ten shillings or one hundred pounds of tobacco att the election aforesaid, and if the offender or offenders in any of the aforesaid vices be not able to pay the fines and forfeitures aforementioned then every such offender or offenders therein, shall be committed to the stocks for every such offence there to remaine the space of two full howers. And for the more effectual suppression and prevention of the sins of fornication and adultery,

Bee it further enacted by the authority aforesaid, that every person or persons comitting fornication and being therein lawfully convicted by the oath of two witnesses or confession of the party shall forfeit and pay the sume of five hundred pounds of tobacco and casque for every time soe offending and that every person or persons comitting adultery and being thereof lawfully convicted as aforesaid, shall forfeit and pay for every such offence the sume of one thousand pounds of tobacco and casque, and it the offender or offenders in any or both the aforesaid two sins or offences, be not able to pay theire fines and forfeitures for the said offences mentioned then every offender or offenders therein, shall for every time soe offending receive on his her or their bare backs twenty-five lashes well laid on, or two monthes imprisonment without bayle or mainprize, and if they or either of them comiting fornication as aforesaid be servants, then if the master or mistress of such servant or servants so offending or any other person doe pay the aforesaid five hundred pounds of tobacco the said servant in compensation thereof, shall serve halfe a year after the time by indenture or custome is expired, and if the master or any other person doe not pay the said fine the said servant shall receive upon his or her bare back twenty-five lashes well layed on, and if it happen that a bastard child be gotten in such fornication, then the servant if a woman in regard of 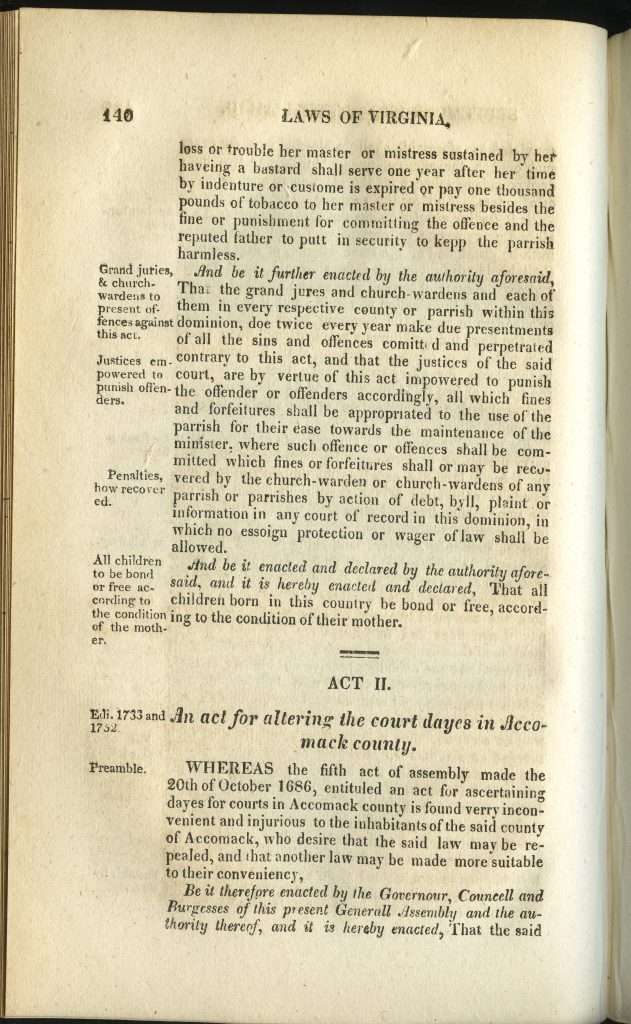 the loss or trouble her master or mistress sustained by her haveing a bastard shall serve one year after her time by indenture or custome is expired or pay one thousand pounds of tobacco to her master or mistress besides the fine or punishment for committing the offence and the reputed father to putt in security to kepp the parrish harmless.

And be it further enacted by the authority aforesaid, That the grand jures and church-wardens and each of them in each respective county or parrish within this dominion, doe twice every year make due presentments of all the sins and offences comitted and perpetrated contrary to this act, and that the justices of the said court, are by vertue of this act impowered to punish the offender or offenders accordingly, all which fines and forfeitures shall be appropriated to the use of the parrish for their ease towards the maintenance of the minister, where such offence or offences shall be committed which fines or forfeitures shall or may be recovered by the church-warden or church-wardens of any parrish or parrishes by action of debt, byll, plaint or information in any court of record in this dominion, in which no essoign protection or wager of law shall be allowed.

“An Acte towching dyvers Orders for Artificers Laborers Servantes of Husbandrye and Apprentises” (1563) Laws Concerning Indentured Servants (1619) Law Regulating Indentured Servants (1642–1643) Law Regulating Marriage of Indentured Servants (1642–1643) Law Prohibiting Indentured Servants from Hiring Themselves Out (1642–1643) Irish Servants (1654) “Concerning Hireing of Servants” (1657–1658) “Concerning secret Marriages” (1657–1658) “How long Servants without Indentures shall Serve” (1657–1658) “An Act for repealing an Act for Irish Servants” (1659) “Against ffornication” (1661–1662) “Women servants gott with child by their masters after their time expired to be sold by the Churchwardens for two yeares for the good of the parish” (1662) “Man Servants getting any bastard child to make satisfaction to the parish after their service ended” (1662) “Women servants whose common imployment is working in the ground to be accompted tythable” (1662) “An act for the more effectuall suppressing the severall sins and offences of swaring, cursing, profaineing Gods holy name, Sabbath abuseing, drunkenness, ffornication, and adultery” (1691)