Skip to content
Author: ParliamentTranscription Source: The Statutes of the Realm. Printed by Command of His Majesty King George the Third. In Pursuance of an Address of the House of Commons of Great Britain. From Original Records and Authentic Manuscripts (Buffalo, N.Y.: William S. Hein & Co., Inc., 1993), 4:414–415.
FULL TEXT

I. Such Laws repealed so far as relates to such Hiring, Wages, &c. 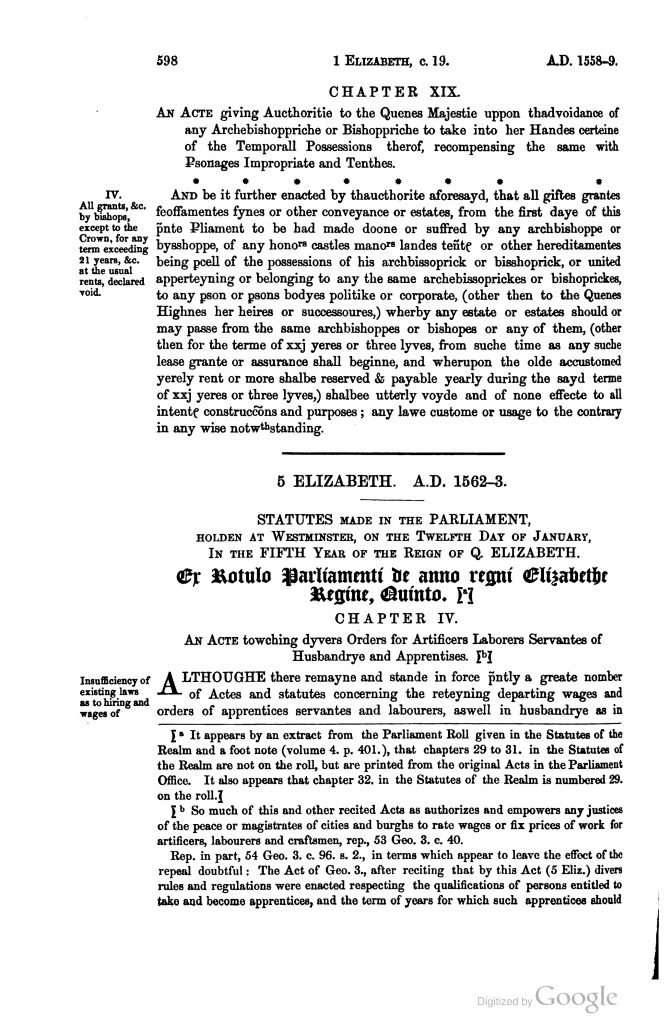 The Statutes of the Realm, Page 598
Althoughe there remayne and stande in force presently a great number of Actes and Statutes concerning the reteyning departing wages and orders of Apprentices Servantes and Labourers, aswell in Husbandrye as in
— page 599 — 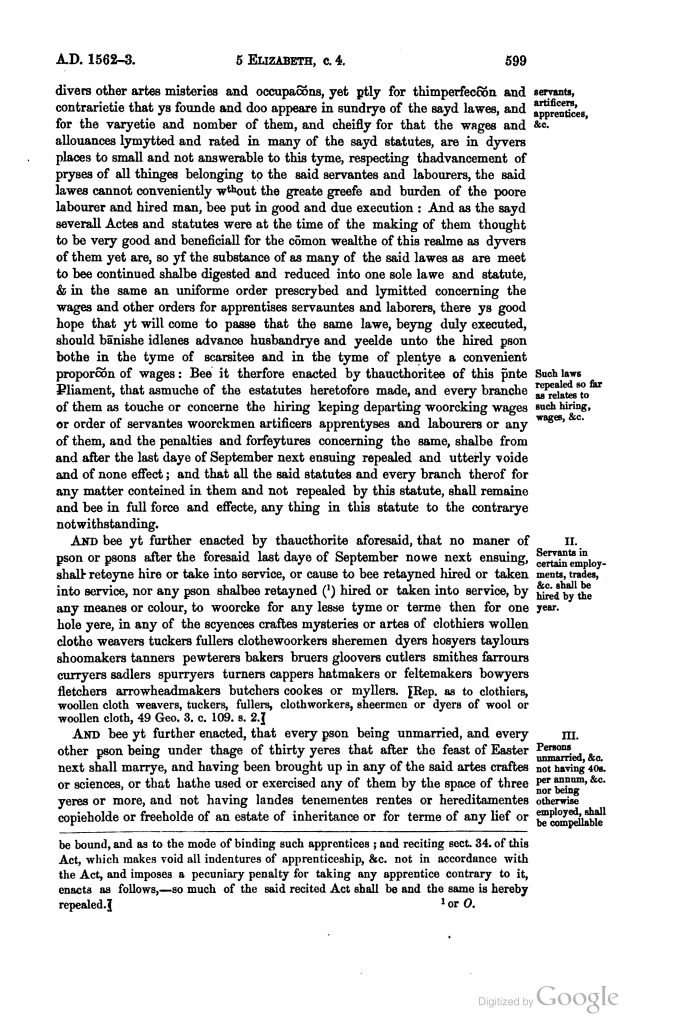 The Statutes of the Realm, Page 599

divers other Artes Misteries and Occupacions, yet partly for thimperfeccion and contrarietie that ys founde and doo appeare in sundrye of the sayd Lawes, and for the varyetie and nomber of them, and cheifly for that the wages and allouances lymytted and rated in many of the sayd Statutes, are in dyvers places to small and not answerable to this tyme, respecting thadvancement of Pryses of all thinges belonging to the said Servantes and Labourers, the said Lawes cannot conveniently without the greate greefe and burden of the poore Labourer and hired man, bee put in good and due execution: And as the sayd severall Actes and Statutes were at the time of the making of them thought to be very good and beneficiall for the Common wealthe of this Realme as dyvers of them yet are, So yf the substance of as many of the said Lawes as are meet to bee continued shalbe digested and reduced into one sole Lawe and Statute, & in the same an uniforme Order prescrybed and lymitted concerning the Wages and other Orders for Apprentises Servauntes and Laborers, there ys good hope that yt will come to passe that the same Lawe, beyng duly executed, should banishe Idlenes advance Husbandrye and yeelde unto the hired person bothe in the tyme of scarsitee and in the tyme of plentye a convenient proporcion of Wages: Bee it therfore enacted by thaucthoritee of this presente Parliament, That asmuche of the Estatutes heretofore made, and every branche of them as touche or concerne the hiring keping departing woorcking wages or order of Servantes Woorckmen Artificers Apprentyses and Labourers or any of them, and the Penalties and Forfeytures concerning the same, shalbe from and after the last daye of September next ensuing repealed and utterly voide and of none effect; And that all the said Statutes and every branch therof for any Matter conteined in them and not repealed by this Statute, shall remaine and bee in full force and effecte, Any thing in this Statute to the contrarye notwithstanding.

II. Servants in certain Employments, Trades, &c. shall be hired by the Year.

And bee yt further enacted by thaucthoritie aforesaid, That no maner of person or persons after the foresaid last daye of September nowe next ensuing, shall reteyne hire or take into service, or cause to bee retayned hired or taken into service, nor any person shalbee retayned hired or taken into service, by any meanes or colour, to woorcke for any lesse tyme or terme then for one hole yere, in any of the Scyences Craftes Mysteries or Artes of Clotheirs Wollen Clothe Weavers Tuckers Fullers Clothewoorkers Sheremen Dyers Hosyers Taylours Shoomakers Tanners Pewterers Bakers Bruers Gloovers Cutlers Smithes Farrours Curryers Sadlers Spurryers Turners Cappers Hatmakers or Feltemakers Bowyers Fletchers Arrowheadmakers Butchers Cookes or Myllers.

III. Persons unmarried, &c. not having 40s. per Annum, &c. nor being otherwise employed, shall be compellable to serve as yearly Servants in the several Arts in which they were brought up.

And bee yt further enacted, That ever person being unmarried, and every other person being under thage of thirty yeres that after the Feast of Easter next shall marrye, and having been brought up in any of the said Artes Craftes or Sciences, or that hathe used or exercised any of them by the space of three yeres or more, and not having Landes Tenementes Rentes or Hereditamentes Copieholde or Freeholde of an Estate or Inheritance or for terme of any Lief or 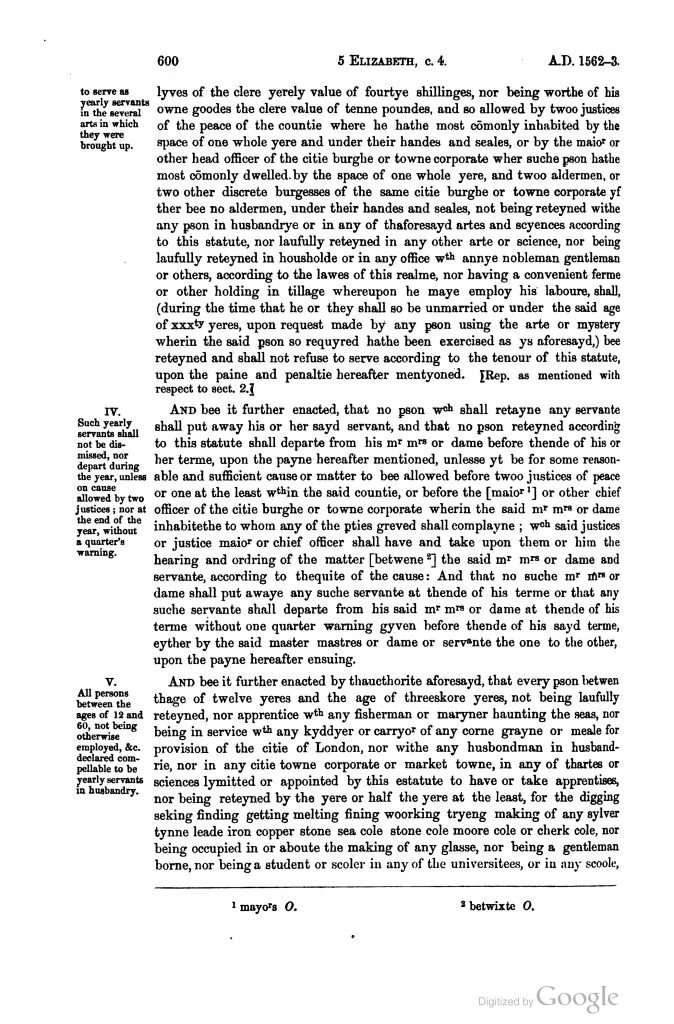 The Statutes of the Realm, Page 600

Lyves of the clere yerely value of fourtye shillings, nor being worthe of his owne Goodes the clere value of tenne poundes, and so allowed by twoo Justices of the Peace of the Countie where he hath most commonly inhabited by the other head officer of the Citie Burghe or Towne Corporate wher suche person hathe most commonly dwelled by the space of one whole yere, and twoo Aldermen, or two other discrete Burgesses of the same citie burghe or towne corporate yf ther bee no Aldermen, under their Handes and Seales, not being reteyned withe any person in Husbandrye or in any of thaforesayd Artes and Scyences according to this Statute, nor laufully reteyned in any other Arte or Science, nor being laufully reteyned in Housholde or in any Office with annye Nobleman Gentleman or others, according to the Lawes of this Realme, nor having a convenient Ferme or other holding in Tillage whereupon he maye employ his Laboure, shall, (during the time that he or they shall so be unmarried or under the said Age xxxty yeres, upon request made by any person using the Arte or Mystery wherin the said person so requyred hathe been exercised as ys aforesaid,) bee reteyned and shall not refuse to serve according to the tenour of this Statue, upon the paine and penalties hereafter mentyoned.

IV. Such yearly Servants shall not be dismissed, nor depart during the Year, unless on Cause allowed by Two Justices; nor at the End of the Year, without a Quarter’s Warning.

Laws Concerning Indentured Servants (1619) Law Regulating Indentured Servants (1642–1643) Law Regulating Marriage of Indentured Servants (1642–1643) Law Prohibiting Indentured Servants from Hiring Themselves Out (1642–1643) Irish Servants (1654) “Concerning Hireing of Servants” (1657–1658) “Concerning secret Marriages” (1657–1658) “How long Servants without Indentures shall Serve” (1657–1658) The Duties of Servants and Masters; an excerpt from The Whole Duty of Man (1658) “An Act for repealing an Act for Irish Servants” (1659) “Against ffornication” (1661–1662) “Women servants gott with child by their masters after their time expired to be sold by the Churchwardens for two yeares for the good of the parish” (1662) “Man Servants getting any bastard child to make satisfaction to the parish after their service ended” (1662) “Women servants whose common imployment is working in the ground to be accompted tythable” (1662) “An act for the more effectuall suppressing the severall sins and offences of swaring, cursing, profaineing Gods holy name, Sabbath abuseing, drunkenness, ffornication, and adultery” (1691) “An act for punishment of ffornication and seaverall other sins and offences” (1696)