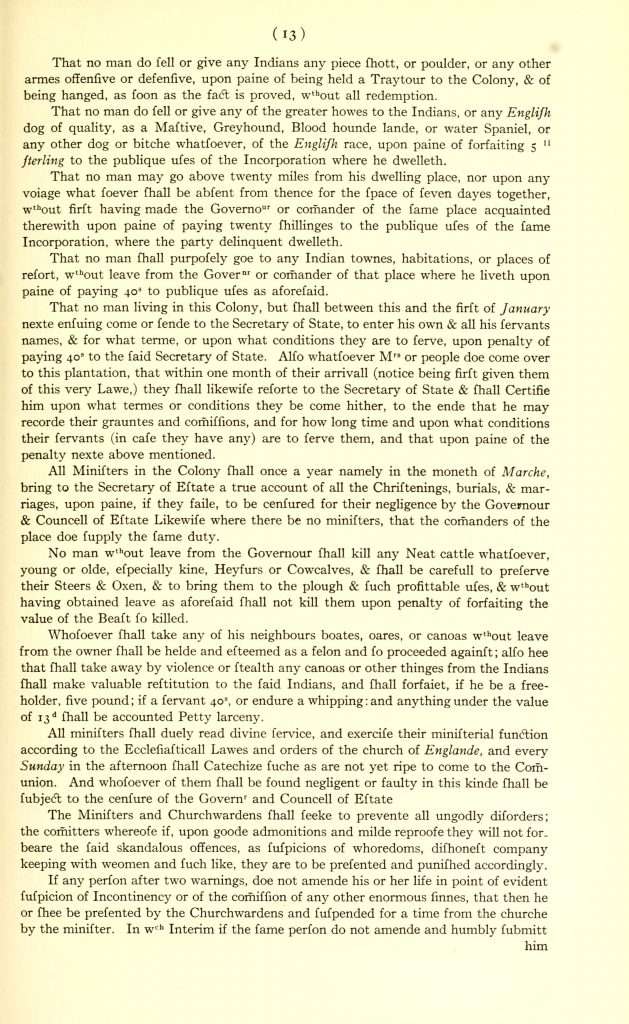 That no man living in this Colony, but shall between this and the first of January nexte ensuing come or sende to the Secretary of State, to enter his own & all his servants names, & for what terme, or upon what conditions they are to serve, upon penalty of paying 40s to the said Secretary of State. Also whatsoever Masters or people doe come over to this plantation, that within one month of their arrivall (notice being first given them of this very Lawe,) they shall likewise resorte to the Secretary of State & shall Certifie him upon what termes or conditions they be come hither, to the ende that he may recorde their grauntes and commissions, and for how long time and upon what conditions their servants (in case they have any) are to serve them, and that upon paine of the penalty nexte above mentioned. 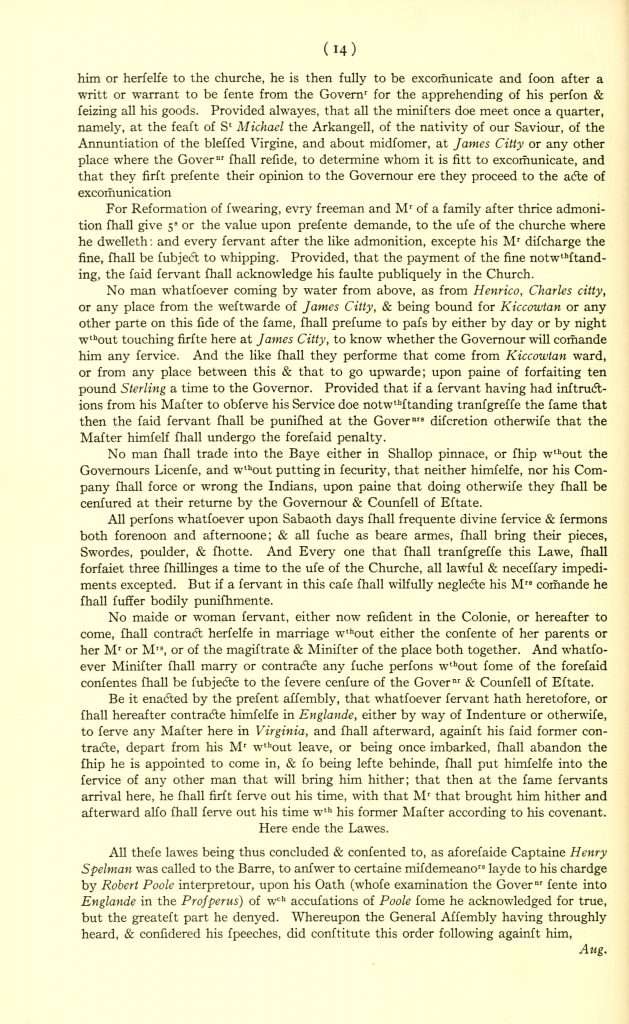 No maide or woman servant, either now resident in the Colonie, or hereafter to come, shall contract herselfe in marriage without either the consente of her parents or Her Master or Mistress, or of the magistrate & Minister of the place both together. And whatsoever Minister shall marry or contracte any such persons without some of the foresaid consentes shall be subjecte to the severe censure of the Governour & Counsell of Estate.

Be it enacted by the present assembly, that whatsoever servant hath heretofore, or shall hereafter contracte himselfe in Englande, either by way of Indenture or otherwise, to serve any Master here in Virginia, and shall afterward, against his said former contracte, depart from his Master without leave, or being once imbarked, shall abandon the ship he is appointed to come in, & so being lefte behinde, shall put himselfe into service of any other man that will bring him hither; that then at the same servants arrival here, he shall first serve out his time, with that Master that brought him hither and afterward also shall serve out his time with his former Master according to his covenant.

“An Acte towching dyvers Orders for Artificers Laborers Servantes of Husbandrye and Apprentises” (1563) Law Regulating Indentured Servants (1642–1643) Law Regulating Marriage of Indentured Servants (1642–1643) Law Prohibiting Indentured Servants from Hiring Themselves Out (1642–1643) Irish Servants (1654) “Concerning Hireing of Servants” (1657–1658) “Concerning secret Marriages” (1657–1658) “How long Servants without Indentures shall Serve” (1657–1658) “An Act for repealing an Act for Irish Servants” (1659) “Against ffornication” (1661–1662) “Women servants gott with child by their masters after their time expired to be sold by the Churchwardens for two yeares for the good of the parish” (1662) “Man Servants getting any bastard child to make satisfaction to the parish after their service ended” (1662) “Women servants whose common imployment is working in the ground to be accompted tythable” (1662) “An act for the more effectuall suppressing the severall sins and offences of swaring, cursing, profaineing Gods holy name, Sabbath abuseing, drunkenness, ffornication, and adultery” (1691) “An act for punishment of ffornication and seaverall other sins and offences” (1696)