Skip to content
Author: General AssemblyTranscription Source: William Waller Hening, ed., The Statutes at Large; Being a Collection of All the Laws of Virginia from the First Session of the Legislature in the Year 1619 (Philadelphia: Thomas Desilver, 1823), 3:71–75.
FULL TEXT
— page 71 — 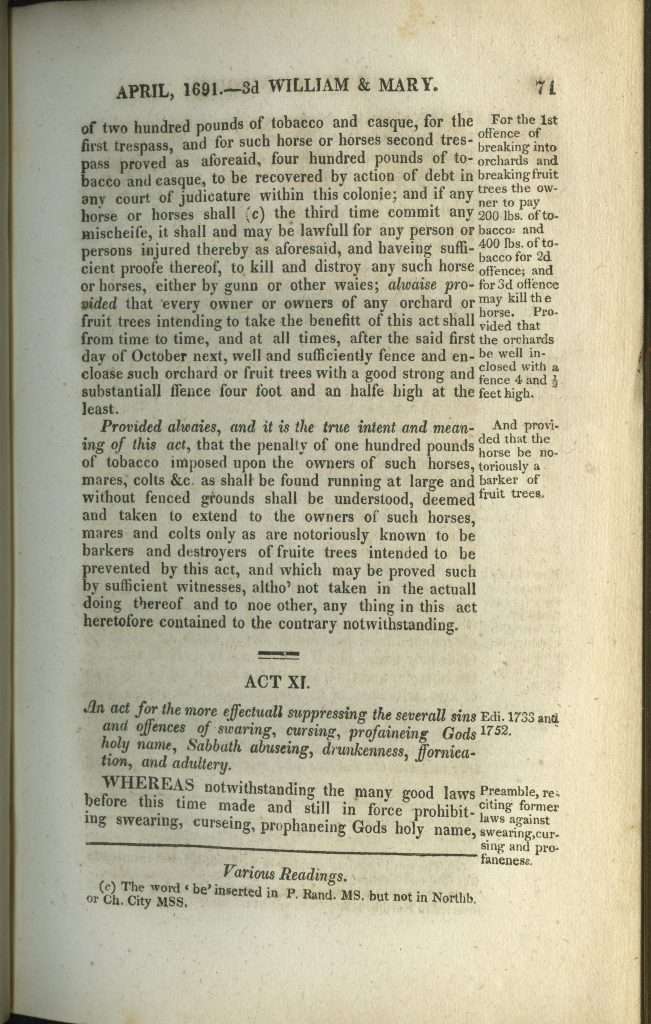 WHEREAS notwithstanding the many good laws before this time made and still in force prohibiting swearing, curseing, prophaneing Gods holy name, 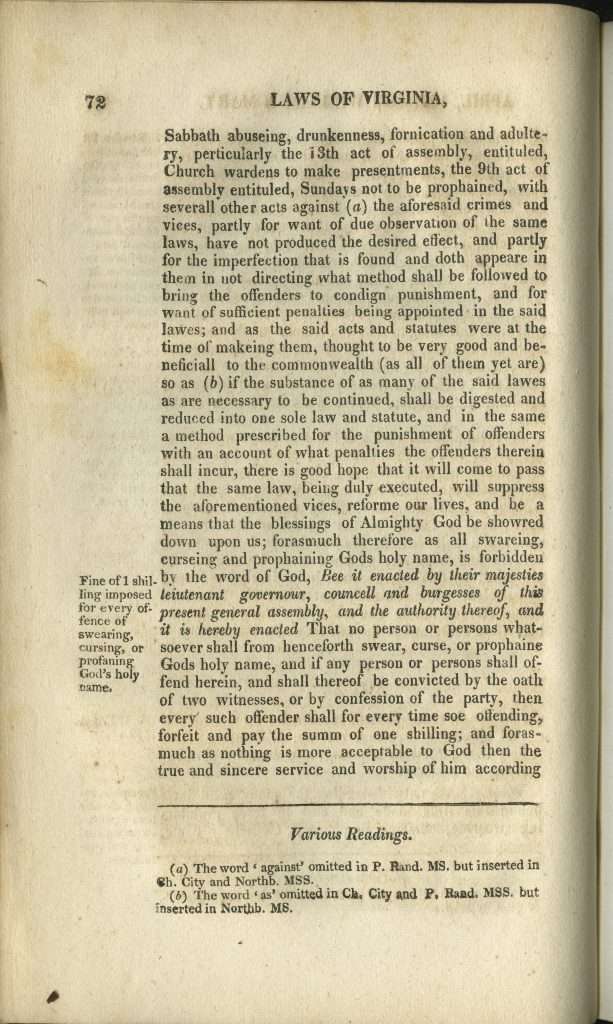 Sabbath abuseing, drunkenness, fornication and adultery, perticularly the 13th act of assembly, entituled, Church wardens to make presentments, the 9th act of assembly entituled, Sundays not to be prophained, with severall other acts against the aforesaid crimes and vices, partly for want of due observation of the same laws, have not produced the desired effect, and partly for the imperfection that is found and doth appeare in them in not directing what method shall be followed to bring the offenders to condign punishment, and for want of sufficient penalties being appointed in the said lawes; and as the said acts and statutes were at the time of makeing them, thought to be very good and beneficiall to the commonwealth (as all of them yet are) so as if the substance of as many of the said lawes as are necessary to be continued, shall be digested and reduced into one sole law and statute, and in the same a method prescribed for the punishment of offenders with an account of what penalties the offenders therein shall incur, there is good hope that it will come to pass that the same law, being duly executed, will suppress the aforementioned vices, reforme our lives, and be a means that the blessings of Almighty God be showred down upon us; forasmuch therefore as all swareing, curseing and prophaining Gods holy name, is forbidden by the word of God, Bee it enacted by their majesties leiutenant governour, councell and burgesses of this present general assembly, and the authority thereof, and it is hereby enacted That no person or persons whatsoever shall from henceforth swear, curse, or prophaine Gods holy name, and if any person or persons shall offend herein, and shall thereof be convicted by the oath of two witnesses, or by confession of the party, then every such offender shall for every time soe offending, forfeit and pay the summ of one shilling; and forasmuch as nothing is more acceptable to God then the true and sincere service and worship of him according 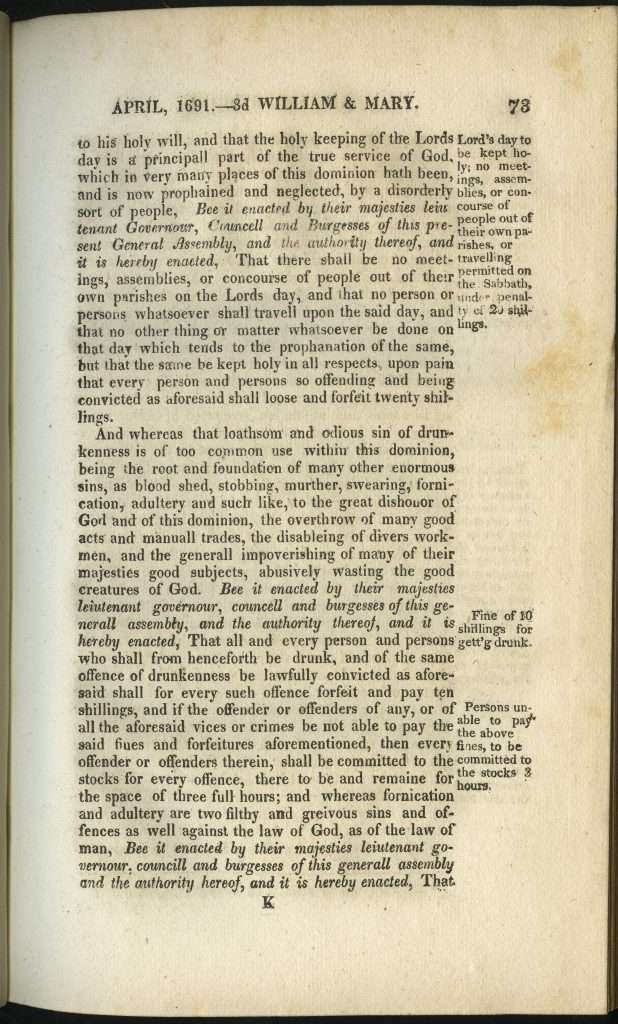 to his holy will, and that the holy keeping of the Lords day is a principall part of the true service of God, which in very many places of this dominion hath been, and is now prophained and neglected, by a disorderly sort of people, Bee it enacted by their majesties leiutenant Governour, Councell and Burgesses of this present General Assembly, and the authority thereof, and it is hereby enacted, That there shall be no meetings, assemblies, or concourse of people out of their own parishes on the Lords day, and that no person or persons whatsoever shall travell upon the said day, and that no other thing or matter whatsoever be done on that day which tends to the prophanation of the same, but that the same be kept holy in all respects, upon pain that every person and persons so offending and being convicted as aforesaid shall loose and forfeit twenty shillings.

And whereas that loathsom and odious sin of drunkenness is of too common use within this dominion, being the root and foundation of many other enormous sins, as blood shed, stobbing, murther, swearing, fornication, adultery and such like, to the great dishonor of God and of this dominion, the overthrow of many good acts and manuall trades, the disableing of divers workmen, and the generall impoverishing of many of their majesties good subjects, abusively wasting the good creatures of God. Bee it enacted by their majesties leiutenant governour, councell and burgesses of this generall assembly, and the authority thereof, and it is hereby enacted, That all and every person and persons who shall from henceforth be drunk, and of the same offence of drunkenness be lawfully convicted as aforesaid shall for every such offence forfeit and pay ten shillings, and if the offender or offenders of any, or of all the aforesaid vices or crimes be not able to pay the said fines and forfeitures aforementioned, then every offender or offenders therein, shall be committed to the stocks for every offence, there to be and remaine for the space of three full hours; and whereas fornication and adultery are two filthy and greivous sins and offences as well against the law of God, as of the law of man, Bee it enacted by their majesties leiutenant governour, councill and burgesses of this generall assembly and the authority hereof, and it is hereby enacted, That 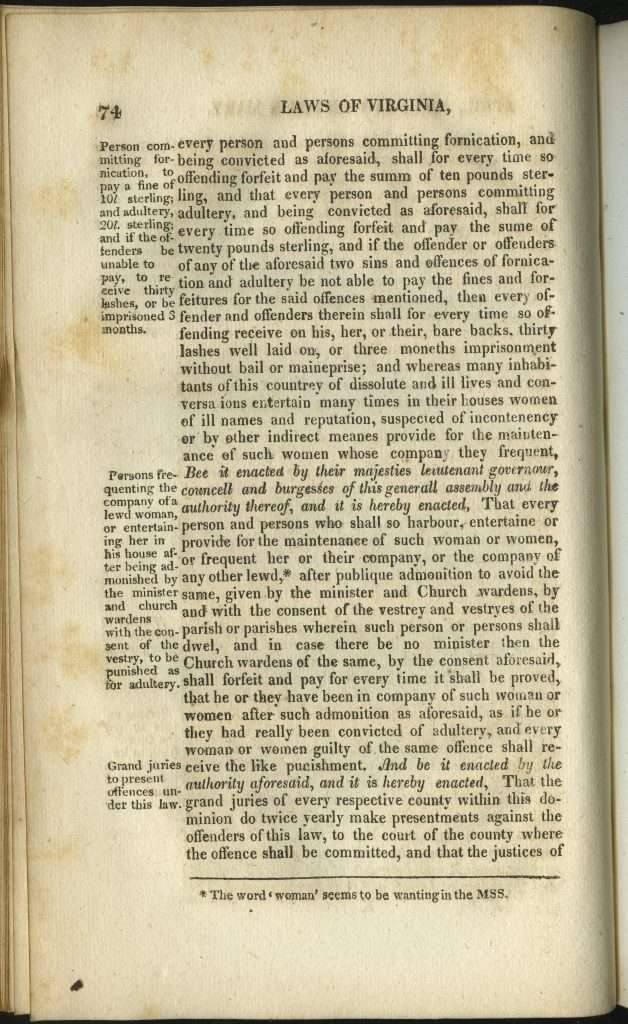 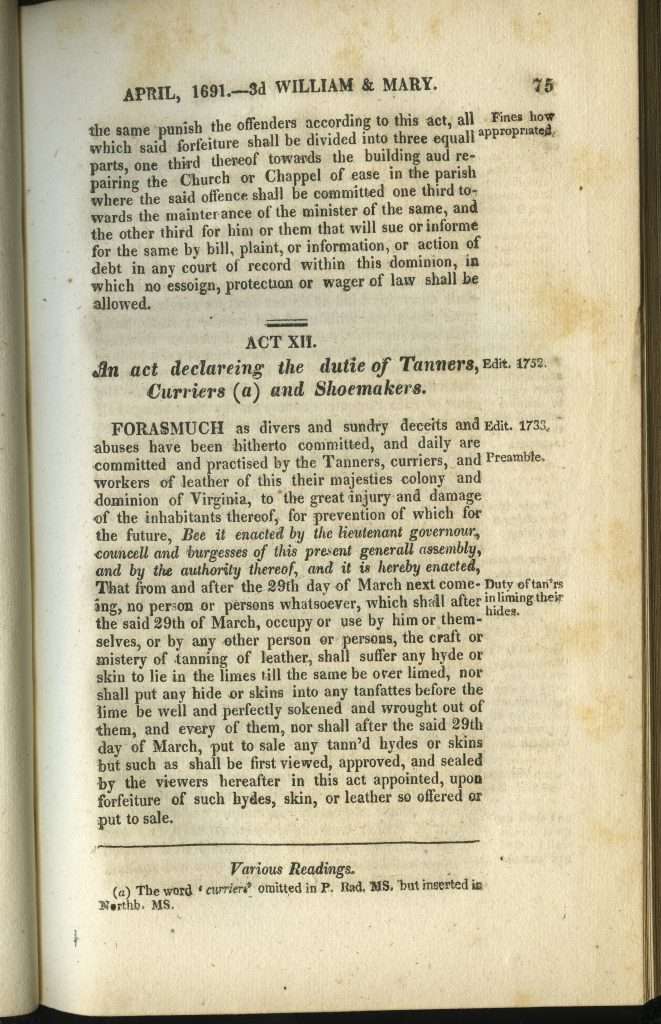 the same punish the offenders according to this act, all which said forfeiture shall be divided into three equall parts, one third thereof towards the building and repairing the Church or Chappel of ease in the parish where the said offence shall be committed one third towards the maintenance of the minister of the same, and the other third for him or them that will sue or informe for the same by bill, plaint, or information, or action of debt in any court of record within this dominion, in which no essoign, protection or wager of law shall be allowed.