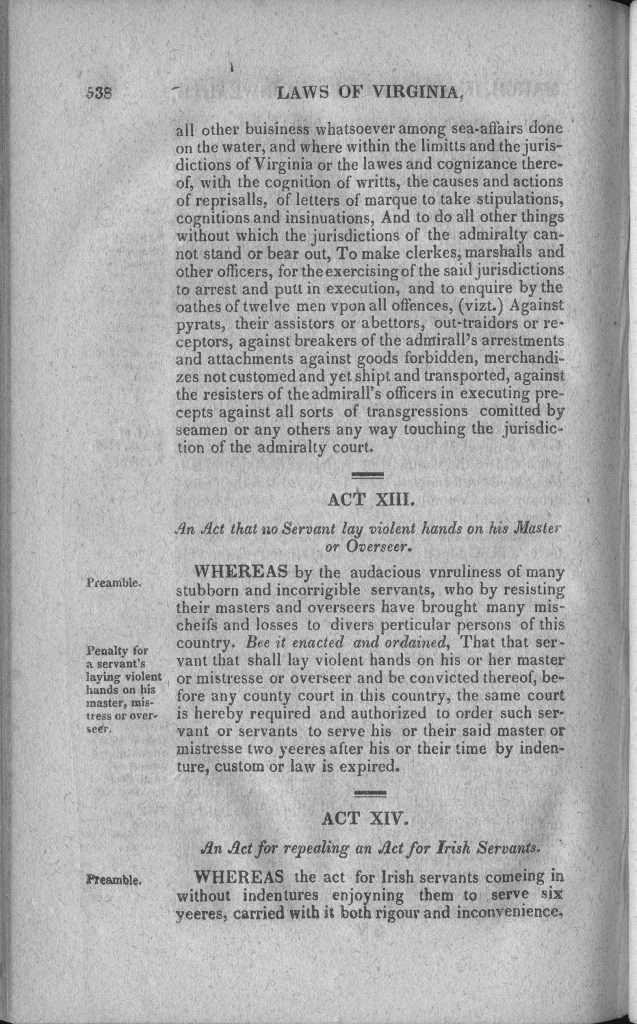 WHEREAS the act for Irish servants comeing in without indentures enjoyning them to serve six yeeres, carried with it both rigour and inconvenience, 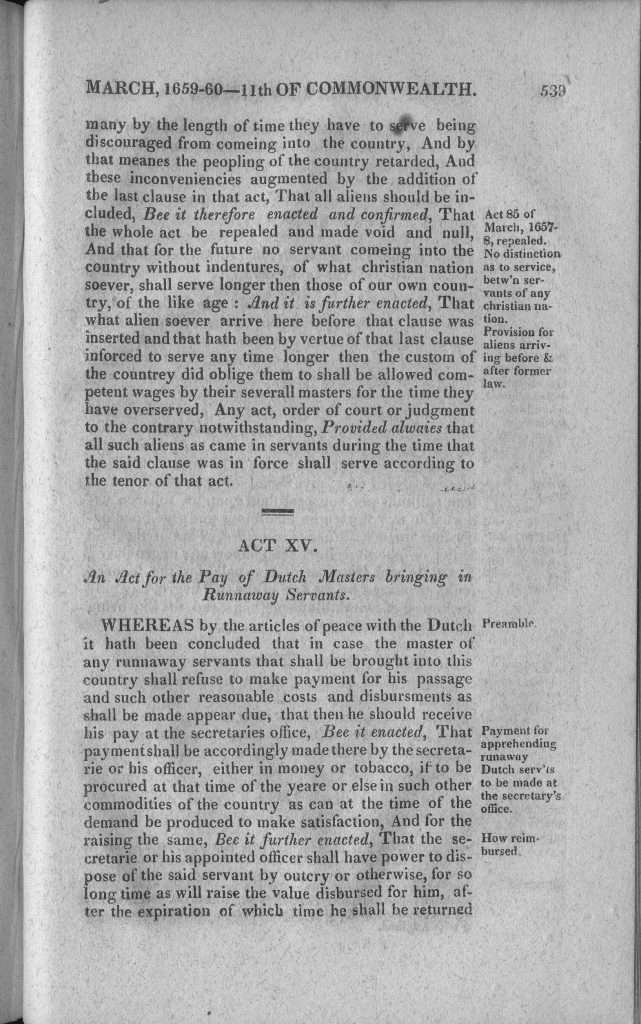 many by the length of time they have to serve being discouraged from comeing into the country, And by that meanes the peopling of the country retarded, And these inconveniences augmented by the addition of the last clause in that act, That all aliens should be included, Bee it therefore enacted and confirmed, That the whole act be repealed and made void and null, And that for the future no servant comeing into the country without indentures, of what christian nation soever, shall serve longer then those of our own country, of the like age: And it is further enacted, That what alien soever arrive here before that clause was inserted and that hath been by vertue of that last clause inforced to serve any time longer then the custom of the countrey did oblige them to shall be allowed competent wages by their severall masters for the time they have overserved, Any act, order of court or judgment to the contrary notwithstanding, Provided alwaies that all such aliens as came in servants during the time that the said clause was in force shall serve according to the tenor of that act.

“An Acte towching dyvers Orders for Artificers Laborers Servantes of Husbandrye and Apprentises” (1563) Laws Concerning Indentured Servants (1619) Law Regulating Indentured Servants (1642–1643) Law Regulating Marriage of Indentured Servants (1642–1643) Law Prohibiting Indentured Servants from Hiring Themselves Out (1642–1643) Irish Servants (1654) “Concerning Hireing of Servants” (1657–1658) “Concerning secret Marriages” (1657–1658) “How long Servants without Indentures shall Serve” (1657–1658) “Against ffornication” (1661–1662) “Women servants gott with child by their masters after their time expired to be sold by the Churchwardens for two yeares for the good of the parish” (1662) “Man Servants getting any bastard child to make satisfaction to the parish after their service ended” (1662) “Women servants whose common imployment is working in the ground to be accompted tythable” (1662) “An act for the more effectuall suppressing the severall sins and offences of swaring, cursing, profaineing Gods holy name, Sabbath abuseing, drunkenness, ffornication, and adultery” (1691) “An act for punishment of ffornication and seaverall other sins and offences” (1696)