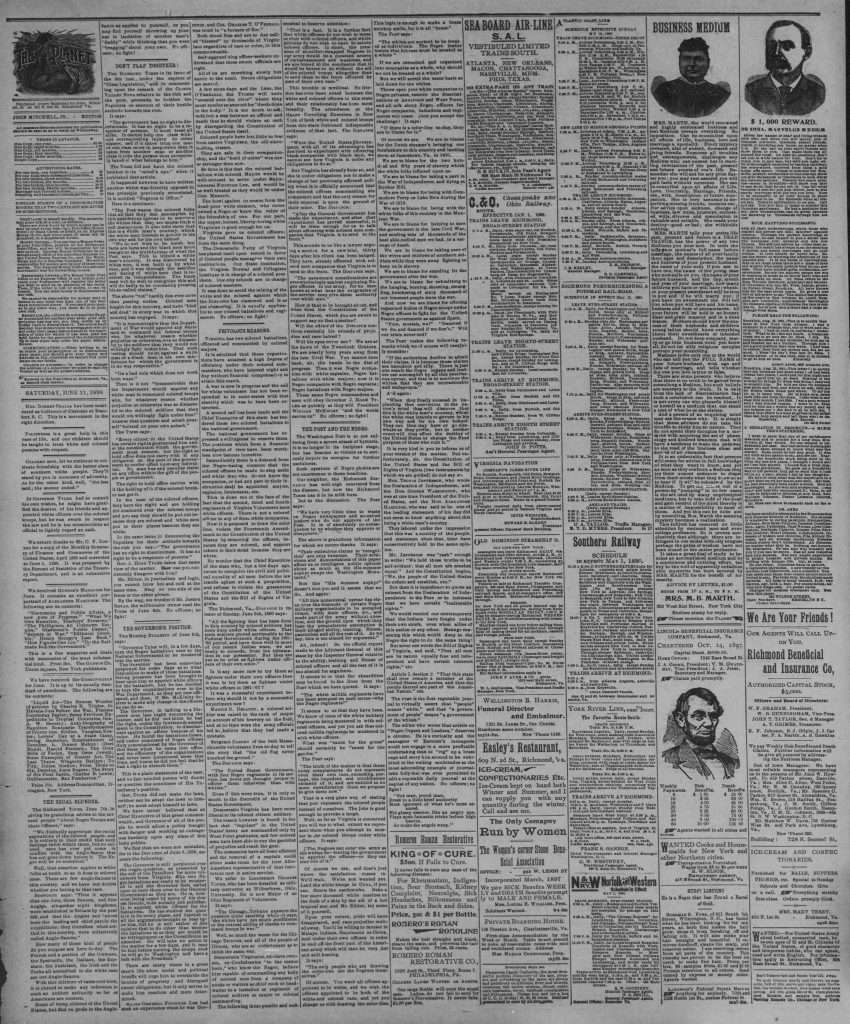 It is admitted that these organizations have attained a high degree of efficiency under their colored commanders, who have labored night and day without financial compensation to attain this result.

A war is now in progress and the call for white volunteers has not been responded to in some states with that alacrity which was to have been expected.

A second call has been made and the Chief Executive of this state has tendered these two colored battalions to the national government.

The national government has expressed a willingness to receive them. The positions which from a financial standpoint of view have been worthless not become lucrative.

Immediately there is a demand from the Negro-hating element that the colored officers be made to step aside and white men who do not know the companies, or had any part in their instruction shall be appointed majors, captains, lieutenants, etc.

This is done in the face of the fact that the second, third and fourth regiments of Virginia Volunteers have white officers. There is not a colored officer in any of these white companies.

Now it is proposed to draw the color line, violate the Fourteenth Amendment to the Constitution of the United States by removing the officers, because they are colored, and appoint others in their stead because they are white.

No wonder that the Chief Executive of the state who, but a few days ago, swore to recognize the civil and political equality of all men before the law stands aghast at such a proposition, and refuses to violate the guarantees of the Constitution of the United States and the Bill of Rights of Virginia.

“All the fighting that has been done in this country by colored soldiers has been done under white officers. That such soldiers proved serviceable to the Federal Government during the 1861–’65 period, and have done well in some of our recent Indian wars, we are ready to concede, from the information in our possession. But they are yet to be tried as fighters under officers of their own color.

Martin R. Delaney, a colored soldier was raised to the rank of major on account of his bravery on the field, and at no time were the army officials led to believe that they had made a mistake.

Sergeant [William H.] Carney of the 54th Massachusetts volunteers lives to-day to tell the story that “the old flag never touched the ground.”

“The United States Government, with four Negro regiments in its service, has never yet thought proper to officer them otherwise than with whites.”

Even if this were true, it is only so much to the discredit of the United States Government.

Democratic Virginia has been more liberal to its colored citizen soldiery.

The reason however is found in the fact that “regulars” in the United States’ Army are commanded only by West Point graduates, and few colored men have been able to run the gauntlet of prejudice to reach the goal.

The companies have all be efficient and the removal of a captain could alone make room for the lone Afro-American representative of that institution now in active serves.

We refer to Lieutenant Charles Young, who has been detailed as military instructor at Wilberforce, Ohio, University. He is now Major of an Ohio Regiment of Volunteers.

“The Chicago Tribune answers the question quite candidly when it says, “the whites have not much confidence in the natural ability of blacks to command troops in war.”

Well, so much the worse for the Chicago Tribune. And all of the people of Illinois, who are so unfortunate as to think the same way.

Democratic Virginians, ex-slave owners, ex-Confederates “to the manor born,” who know the Negro, believe him capable of commanding any body of colored men from a company of cooks or waiters as chief cook or headwaiter to a battalion or regiment of colored soldiers as major or colonel commanding.

The following is too puerile and nonsensical to deserve attention:

“That is a fact. It is a further fact that white officers do not wish to mess or club with colored officers, and white privates do not wish to have to salute colored officers. In short, the presence of shoulder-strapped Negroes in our army would be a constant source of embarrassment and weakness, and we are forced to the conclusion that it would be better to do without the aid of the colored troops altogether than to send them to the front officered by men of their own race.”

This trouble is mythical. No friction has ever been noted between the white and colored officers in this state and their relationship has been most friendly. The attendance at the Grant Unveiling Exercises in New York of both white and colored troops from this state furnished indisputable evidence of that fact. The Dispatch says:

“When the United States Government, with all of its advantages, has declined to experiment with officering black companies with black men, we cannot see how Virginia is under any obligations to do so.”

But Virginia has already done so, and she is under obligations not to make a change of her previously affirmed policy when it is officially announced that the colored officers commanding are competent and that the only reason for their removal is upon the ground of their color. The Dispatch:

“After the General Government has made the experiment, and after that experiment has proved successful, it will be time enough for us to talk about officering with colored men companies that Virginia is to send to the front.”

This sounds to us like a lawyer arguing a motion for a new trial, thirty days after his client has been hanged. They have already officered with colored men companies that Virginia is to send to the front. The Dispatch says:

“The paramount considerations are overwhelmingly against employing Negro officers in our army, for no man knows at what hour the exigencies of the service may give them authority over white men.”

How is that to be brought about, and what does the Constitution of the United States, which you are sworn to support say on that question?

Will the editor of the Dispatch continue eternally his crusade of prejudice and race hatred?

Will his eyes never see? We are at the dawn of the Twentieth Century. We are nearly forty years away from the late Civil War. You cannot turn back, sir, the hands on the dial of progress. Then it was Negro companies with white captains, Negro battalions with white majors; now it is Negro companies with Negro captains; Negro battalions with Negro majors.

These same Negro commanders and men will obey Governor J. Hoge Tyler as quickly as they will President William McKinley “and the world moves on” No officers; no fight!

An Act for raising levies and recruits to serve in the present expedition against the French, on the Ohio (October 1754) An Act for better regulating and training the Militia (August 1755) An act for regulating and disciplining the Militia (May 5, 1777) “At Work for the Prizes,” Washington Post (May 27, 1887) Proclamation 412: Calling Forth Volunteers to Serve in the War with Spain (April 23, 1898) Proclamation 415: Calling Forth Additional Volunteers to Serve in the War with Spain (May 25, 1898) “Hard Times in the Sixth Virginia,” Richmond Planet (December 24, 1898) “Griffin Men Did Their Duty in Checking Drunken Negroes,” Atlanta Constitution (March 10, 1899) “The Griffin Episode,” Atlanta Constitution (March 19, 1899)