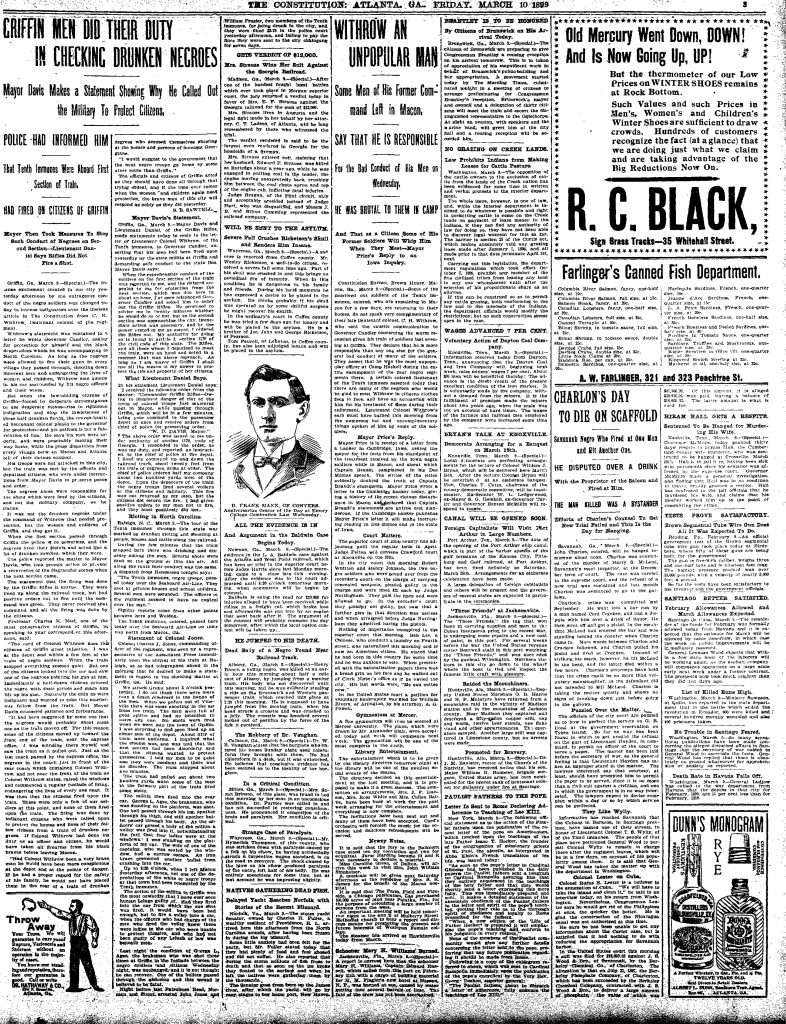 Griffin Men Did Their Duty in Checking Drunken Negro

Mayor Davis Makes a Statement Showing Why He Called Out the Military to Protect Citizens.

Police Had Informed Him

That Tenth Immunes Were Aboard First Section of Train.

Had Fired on Citizens of Griffin

Mayor Then Took Measures To Stop Such Conduct of Negroes on Second Section—Lieutenant Daniel Says Rifles Did Not Fire a Shot.

Griffin, Ga. March 9.—(Special.)—The intense excitement created in our city yesterday afternoon by the outrageous conduct of the negro soldiers was changed today to intense indignation over the libelous article in The Constitution from C. H. Withrow, lieutenant colonel of the regiment.

Withrow’s statement was contained in a letter he wrote Governor [Allen D.] Candler, asking for protection for himself and the black desperadoes whom he was accompanying to North Carolina. As long as the negroes were allowed to fire their guns in every village they passed through, shooting down innocent men and endangering the lives of women and children, Withrow sets quietly in his car surrounded by his negro officers and their wives.

But when the law-abiding citizens of Griffin—forced by desperate circumstances to use desperate means—rise in righteous indignation and stop the lawlessness of these half drunken fiends, the craven-hearted lieutenant colonel pleads to the governor for protection—and his petition is but a fabrication of lies. He says his men were orderly, and were peaceably making their way home, while the press dispatches from every village between Macon and Atlanta tell of their riotous conduct.

His troops were not attacked in this city, but the train was met by the officers and deputized citizens, who were under instructions from Mayor [W. D.] Davis to preserve peace and order.

The negroes alone were responsible for the shots which were fired by the citizens, and not the military company, as he claims.

It was not the drunken negroes under the command of Withrow that needed protection, but the women and children of Griffin, and they got it.

When the first section passed through Griffin the police were powerless, and the negroes fired their pistols and acted like a lot of drunken rowdies, which they were.

The police reported the matter to Mayor Davis, who took prompt action to prevent a recurrence of the disgraceful scenes when the next section came.

Professor Charles M. Neel, one of the most conservative citizens of Griffin, in speaking to your correspondent this afternoon, said:

“The card of Colonel Withrow does the citizens of Griffin great injustice. I was at the depot and within a few feet of the train of negro soldiers. When the train stopped everything seemed quiet. But one of the citizens looked into the car and saw one of the negroes pointing his gun at him. Immediately a half-dozen citizens covered the negro with their pistols and made him lift up his gun. Naturally the citizens were indignant and wanted to take this murderous fellow from the train. But Mayor Davis counseled patience and forbearance.

“It had been suggested by some one that the negroes would probably shoot some one as the train moved off. For this reason some of the citizens moved up toward the front end of the train, near the express office. I was standing there myself and saw the train as it pulled out. Just as the last coach passed by the express office, the negroes on the coach just in front of the rear coach which contained Colonel Withrow, and not near the front of the train as Colonel Withrow states, raised the windows and commenced a regular fusilade of firing, endangering the lives of every one near. It was then that the citizens fired upon the train. There were only a few of our soldiers at this point, and none of them fired upon the train. The firing was done by indignant citizens who were called upon to protect the homes and lives of their fellow citizens from a train of drunken negroes. If Colonel Withrow had done his duty as an officer and citizen, he would have taken all firearms from his black braves before leaving Macon.

“Had Colonel Withrow been a very brave man he would have been more conspicuous at the depot and at the points of danger. If he had proper regard for the safety of his family, he would not have placed them in the rear of a train of drunken negroes who amused themselves shooting at the homes and persons of innocent Georgians.

“I would suggest to the government that the next negro troops go home by some other route than Griffin.”

The officials and citizens of Griffin acted as they should have done all through that trying ordeal, and if the time ever comes when the women and children again need protection, the brave men of this city will respond as nobly as they did yesterday.

Griffin, Ga. March 9.—Mayor Davis and Lieutenant [Milton J.] Daniel [Jr.] , of the Griffin Rifles, made statements today in reply to the letter of Lieutenant Colonel Withrow, of the Tenth Immunes, to Governor Candler, asserting that his men had been fired upon yesterday by the state militia at Griffin and demanding safe conduct to the state line. Mayor Davis says:

When the reprehensible conduct of the soldiers on the first section of the train was reported to me, and the citizens appealed to me for protection from the next section, which was due here in about an hour, I at once telephoned Governor Candler and asked him to order out the Griffin Rifles. He promised to advise me in twenty minutes whether he would do so or not, but as the second section was approaching the city, immediate action was necessary, and by the power vested in me as mayor, I ordered the Rifles out. My authority for doing so is found in article 3, section 1170 of the civil code of this state. The Rifles, and all those whom I deputized to meet the train, were on hand and acted in a manner that was above reproach. As long as I am mayor of Griffin I shall use all the means in my power to protect the life and property of her citizens.

In his statement Lieutenant Daniel says:

I received the following order from the mayor: “Commander Griffin Rifles—Owing to the danger of riot at the train of colored troops just mustered out in Macon, while passing through Griffin, which will be in a few minutes, bring your command to the passenger depot at once and receive orders from chief of police for preserving order.

The above order was issued to me under authority of section 1170, code of Georgia. I responded to the order, as was my duty, and reported, as instructed, to the chief of police at the depot. I lined my command up and down the railroad track, about twenty feet from the train of negroes, arms at order .The chief of police ordered half my company about two hundred yards west of the depot. Upon the departure of the train the negro troops fired several volleys at the citizens and military. This fire was not returned by my men, but the citizens did return the fire. I had given positive orders to my men not to fire, and they most positively did not.

Raleigh, N. C., March 9.—The tour of the Tenth Immunes through this state was marked by drunken rioting and shouting at people, houses and cattle along the railroad.

During the few minutes that the train stopped here there was drinking and disorder among the men. Several shots were fired at the ground or into the air. All along the route their conduct was the same. A dispatch from Henderson tonight says:

“The Tenth Immunes, negro troops, passed today over the Seaboard Air-Line. They shot at private houses and school children. Several men were wounded. The officers of the regiment seemed to have no control over the men.”

Similar reports come from other points between here and Weldon.

The Tenth Immunes, colored, passed here today over the Seaboard Air-Line on their way north from Macon, Ga.

Colonel Charles J. Jones, commanding officer of the regiment, was seen by a representative of the Associated Press immediately upon the arrival of his train at Raleigh, as he had telegraphed ahead in the morning that he desired to make a statement in regard to the shooting matter at Griffin, Ga. He said:

We struck Griffin about 5 o’clock yesterday. I do not think there were more than a dozen revolvers in the hands of the men. When we pulled out of Vinesville there was some shooting in the air from the train. The men were full of good spirits and had no intention to harm any one. No shots were fired when we went into the town of Griffin. I was surprised to find men lined up on either side of the depot. About fifty of them wore uniforms. I inquired what the trouble was, and was told that the first section had been disorderly and that the citizens wanted to protect themselves. I told my men to be quiet and they were obedient and there was no disorder. The train stopped about five minutes.

The train had pulled out about two hundred yards when some of the men in the forward part of the train fired some shots.

The militia then fired into the rear car. George L. Agee, the brakeman, who was standing on the platform, was shot. One ball passed through his leg, another through his thigh, and still another bullet passed through his body. As the officers’ car passed a body of the militia a volley was fired into it, notwithstanding the face that four ladies were at the windows. I was standing on the platform of my car. The wife of one of the captains, who was seated by the window, had a narrow escape. An iron brace prevented another bullet from crashing into the car.

Up to 3:30 o’clock, when I left Macon yesterday afternoon, not one of the depredations of the white or negro troops at that town had been committed by the Tenth Immunes.

The action of the militia in Griffin was the most cowardly that I have ever seen human beings guilty of. Had they fired into the car from which the one shot was fired, it would have been bad enough, but to fire a volley in a car, when the officers who had charge of the men who fired the volley knew there were ladies in the car who were unable to protect th[e]ms[e]lv[e]s, and who had not been guilty of any breach of law was beneath the men.

Last night the condition of George L. Agee, the brakeman who was shot three times at Griffin in the fusilade between the negro soldiers and citizens Wednesday night, was unchanged, and it is not thought he can recover. One of the bullets passed through the abdomen and his wound is believed to be fatal.

Night before last Patrolmen Reed, Norman and Steint arrested John Jones and William Frazier, two members of the Tenth Immunes, for being drunk in the city, and they were fined $3.75 in the police court yesterday afternoon, and failing to pay the fines they were sent to the city chaingang for seven days.

An Act for raising levies and recruits to serve in the present expedition against the French, on the Ohio (October 1754) An Act for better regulating and training the Militia (August 1755) An act for regulating and disciplining the Militia (May 5, 1777) “At Work for the Prizes,” Washington Post (May 27, 1887) Proclamation 412: Calling Forth Volunteers to Serve in the War with Spain (April 23, 1898) Proclamation 415: Calling Forth Additional Volunteers to Serve in the War with Spain (May 25, 1898) “Frivolous Reasons,” Richmond Planet (June 11, 1898) “Hard Times in the Sixth Virginia,” Richmond Planet (December 24, 1898) “The Griffin Episode,” Atlanta Constitution (March 19, 1899)