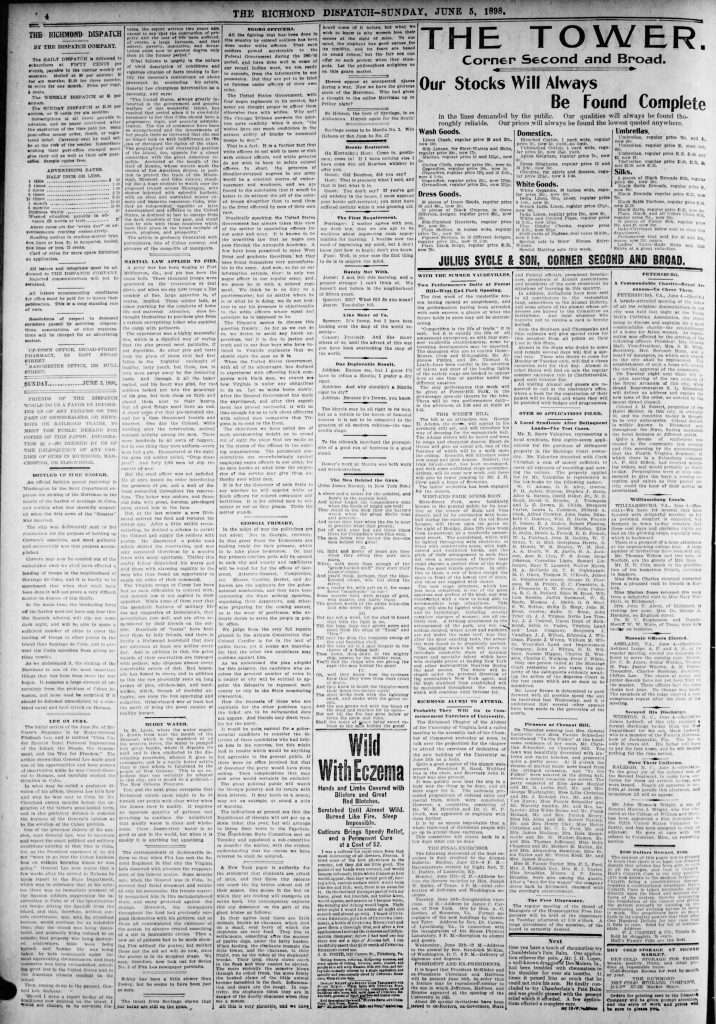 All the fighting that has been done in this country by colored soldiers has been done under white officers. That such soldiers proved serviceable to the Federal Government during the 1861–’65 period, and have done well in some of our recent Indian wars, we are ready to concede, from the information in our possession. But they are yet to be tried as fighters under officers of their own color.

The United States Government, with four negro regiments in its service, has never yet thought proper to officer them otherwise than with whites. Why not? The Chicago Tribune answers the question quite candidly when it says, “the whites have not much more confidence in the natural ability of blacks to command troops in war.”

That is a fact. It is a further fact that white officers do not wish to mess or club with colored officers and white privates do not wish to have to salute colored officers. In short, the presence of shoulder-strapped negroes in our army would be a constant source of embarrassment and weakness, and we are forced to the conclusion that it would be better to do without the aid of the colored troops altogether than to send them to the front officered by men of their own race.

Practically speaking, the United States Government has always taken this view of the matter in appointing officers for our army and navy. It is known to be the unwritten law that no negro can pass through the Annapolis Academy. A few have been permitted to enter West Point and graduate therefrom, but they have found themselves very uncomfortable in the army. And now, so far as our information extends, there is only one negro officer in our regular army, and we guess he is with a colored regiment. We think he is on duty as a quartermaster; but no matter where he is or what he is doing, we do not hesitate to say his presence is objectionable to the white officers whose equal and associate he is supposed to be.

The Dispatch means to discuss this question frankly. As far as we can do so, we desire to avoid any harsh expressions, but it is due to justice and truth and to our dear boys who have enlisted in Virginia regiments that we should state the case as it is.

When the United States Government, with all its advantages, has declined to experiment with officering black companies with black men, we cannot see how Virginia is under any obligations to do so. Let us make haste slowly. After the General Government has made the experiment, and after that experiment has proved successful, it will be time enough for us to talk about officering with colored men companies that Virginia is to send to the front.

The objections we have noted are of such overpowering weight as to crowd out of sight the pleas that are made as to the status of the officers in the existing organizations. The paramount considerations are overwhelmingly against employing negro officers in our army, for no man knows at what hour the exigencies of the service may give them authority over white men.

It is for the Governor of each State to say whether he will appoint white or black officers for colored companies and battalions. It is for the colored men to volunteer or not as they please. There the matter stands.

An Act for raising levies and recruits to serve in the present expedition against the French, on the Ohio (October 1754) An Act for better regulating and training the Militia (August 1755) An act for regulating and disciplining the Militia (May 5, 1777) “At Work for the Prizes,” Washington Post (May 27, 1887) Proclamation 412: Calling Forth Volunteers to Serve in the War with Spain (April 23, 1898) Proclamation 415: Calling Forth Additional Volunteers to Serve in the War with Spain (May 25, 1898) “Frivolous Reasons,” Richmond Planet (June 11, 1898) “Hard Times in the Sixth Virginia,” Richmond Planet (December 24, 1898) “The Griffin Episode,” Atlanta Constitution (March 19, 1899) “Griffin Men Did Their Duty in Checking Drunken Negroes,” Atlanta Constitution (March 10, 1899)