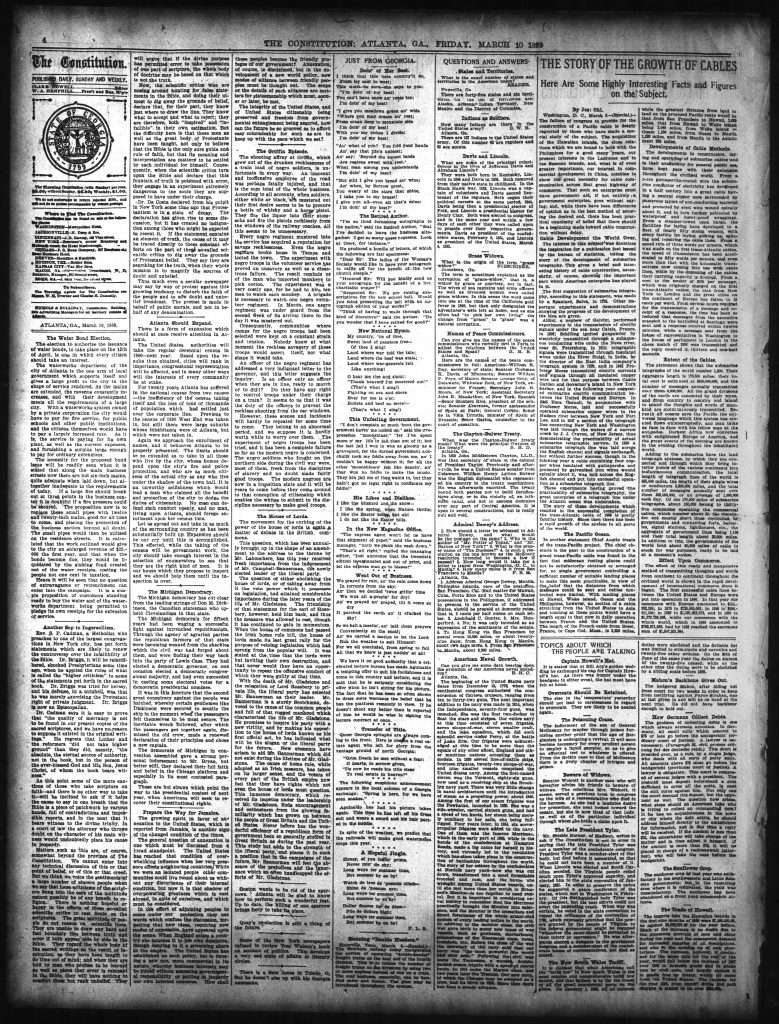 The shooting affray at Griffin, which grew out of the drunken recklessness of a train load of negro soldiers, is unfortunate in every way. An innocent and inoffensive employee of the road was perhaps fatally injured, and that is the sum total of the whole business. According to all accounts, when soldiers, either white or black, are mustered out their first desire seems to be to procure a bottle of whisky and a horse pistol. They fire the liquor into their stomachs and fire the pistols recklessly from the windows of the railway coaches. All this seems to be unnecessary.

Every negro requirement mustered into the service has acquired a reputation for savage recklessness. Even the negro regulars broke loose in Tampa and looted the town. The experiment with negro troops in the volunteer service has proved an unsavory as well as a disastrous failure. The result reminds us of the man who imported monkeys to pick cotton. The experiment was a very costly one, for he had to hire ten men to watch each monkey. In Macon, one negro regiment [6th Virginia Volunteer Regiment] was under guard from the second week of its arrival there to the day it was mustered out.

Consequently, communities where camps for the negro troops had been selected were kept on a constant strain and tension. Nobody knew at what moment the reckless savagery of these troops would assert itself, nor what shape it would take.

An officer of the negro regiment has addressed a very indignant letter to the governor, and this letter suggests the inquiry: Is an officer only an officer when they are in line, ready to march or to drill? Do they have any right to control troops under their charge on a train? It seems to us that it was the duty of the officers to prevent the reckless shooting from the car windows.

However, these scenes and incidents will hardly be repeated for some time to come. They belong to an abnormal period, and we suppose it is hardly worth while to worry over them. The experiment of negro troops has been tried, and it has been a complete failure so far as the modern negro is concerned. The negro soldiers who fought on the northern side during the civil war were, most of them fresh from the discipline of Slavery and no doubt made fairly good troops. The modern negroes are now in a transition state and it will be years to come before they come around to that conception of citizenship which enables whites to submit to the discipline necessary to make good troops.

An Act for raising levies and recruits to serve in the present expedition against the French, on the Ohio (October 1754) An Act for better regulating and training the Militia (August 1755) An act for regulating and disciplining the Militia (May 5, 1777) “At Work for the Prizes,” Washington Post (May 27, 1887) Proclamation 412: Calling Forth Volunteers to Serve in the War with Spain (April 23, 1898) Proclamation 415: Calling Forth Additional Volunteers to Serve in the War with Spain (May 25, 1898) “Frivolous Reasons,” Richmond Planet (June 11, 1898) “Hard Times in the Sixth Virginia,” Richmond Planet (December 24, 1898) “Griffin Men Did Their Duty in Checking Drunken Negroes,” Atlanta Constitution (March 10, 1899)