Skip to content
Author: General AssemblyTranscription Source: William Waller Hening, ed., The Statutes at Large; Being a Collection of All the Laws of Virginia from the First Session of the Legislature in the Year 1619 (Richmond: Franklin Press, 1819), 6:438–440.
FULL TEXT 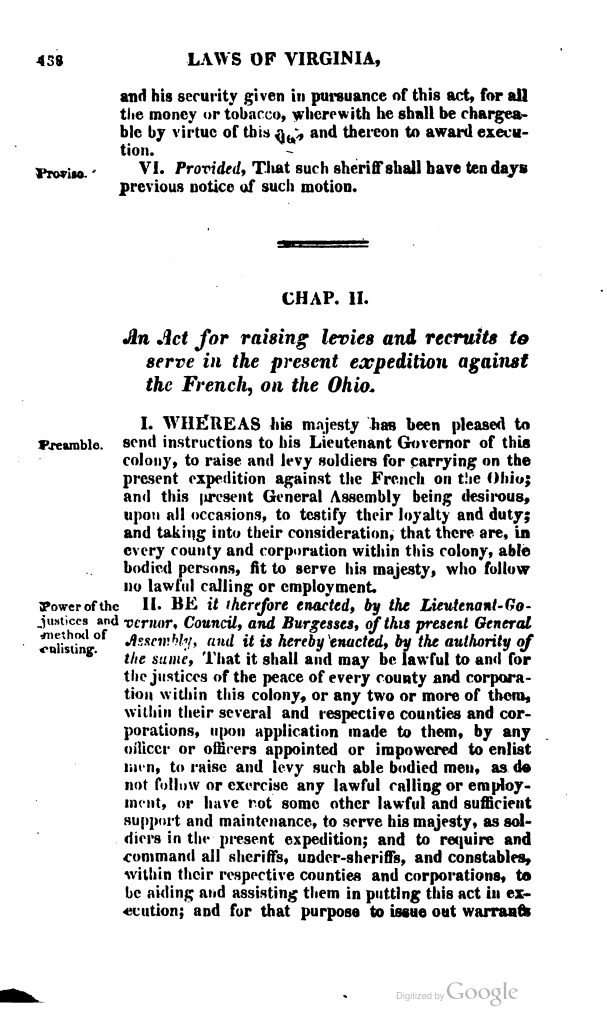 The Statutes at Large; Being a Collection of All the Laws of Virginia from the First Session of the Legislature, in the Year 1619, Volume 6, Page 438

I. WHEREAS his majesty has been pleased to send instructions to his Lieutenant Governor of this colony, to raise and levy soldiers for carrying on the present expedition against the French on the Ohio; and this present General Assembly being desirous, upon all occasions, to testify their loyalty and duty; and taking into their consideration, that there are, in every county and corporation within this colony, able bodied persons, fit to serve his majesty, who follow no lawful calling or employment.

II. BE it therefore enacted, by the Lieutenant-Governor, Council, and Burgesses, of this present General Assembly, and it is hereby enacted, by the authority of the same, That it shall and may be lawful to and for the justices of the peace of every county and corporation within this colony, or any two or more of them, within their several and respective counties and corporations, upon application made to them, by any officer or officers appointed or impowered to enlist men, to raise and levy such able bodied men, as do not follow or exercise any lawful calling or employment, or have not some other lawful and sufficient support and maintenance, to serve his majesty, as soldiers in the present expedition; and to require and command all sheriffs, under-sheriffs, and constables, within their respective counties and corporations, to be aiding and assisting them in putting this act in execution; and for that purpose to issue out warrants 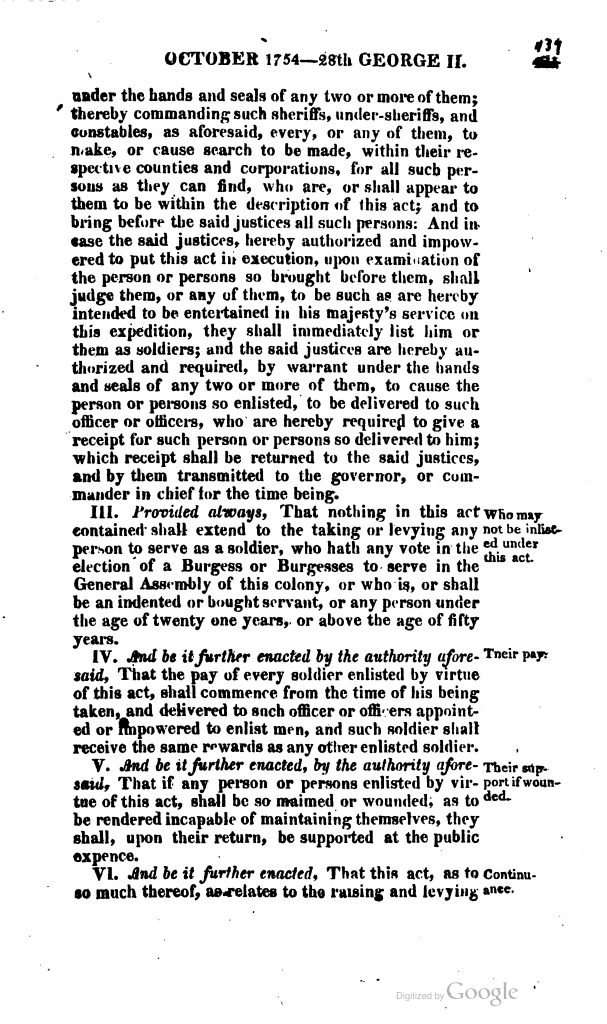 The Statutes at Large; Being a Collection of All the Laws of Virginia from the First Session of the Legislature, in the Year 1619, Volume 6, Page 439

under the hands and seals of any two or more of them; thereby commanding such sheriffs, under-sheriffs, and constables, as aforesaid, every, or any of them, to make, or cause search to be made, within their respective counties and corporations, for all such persons as they can find, who are, or shall appear to them to be within the description of this act; and to bring before the said justices all such persons: And in case the said justices, hereby authorized and impowered to put this act in execution, upon examination of the person or persons so brought before them, shall judge them, or any of them, to be such as are hereby intended to be entertained in his majesty’s service on this expedition, they shall immediately list him or them as soldiers; and the said justices are hereby authorized and required, by warrant under the hands and seals of any two or more of them, to cause the person or persons so enlisted, to be delivered to such officer or officers, who are hereby required to give a receipt for such person or persons so delivered to him; which receipt shall be returned to the said justices, and by them transmitted to the governor, or commander in chief for the time being.

III. Provided always, That nothing in this act contained shall extend to the taking or levying any person to serve as a soldier, who hath any vote in the election of a Burgess or Burgesses to serve in the General Assembly of this colony, or who is, or shall be an indented or bought servant, or any person under the age of twenty one years, or above the age of fifty years.

IV. And be it further enacted by the authority aforesaid, That the pay of every soldier enlisted by virtue of this act, shall commence from the time of his being taken, and delivered to such officer or officers appointed or impowered to enlist men, and such soldier shall receive the same rewards as any other enlisted soldier.

V. And be it further enacted, by the authority aforesaid, That if any person or persons enlisted by virtue of this act, shall be so maimed or wounded, as to be rendered incapable of maintaining themselves, they shall, upon their return, be supported at the public expence.

VI. And be it further enacted, That this act, as to so much thereof, as relates to the raising and levying 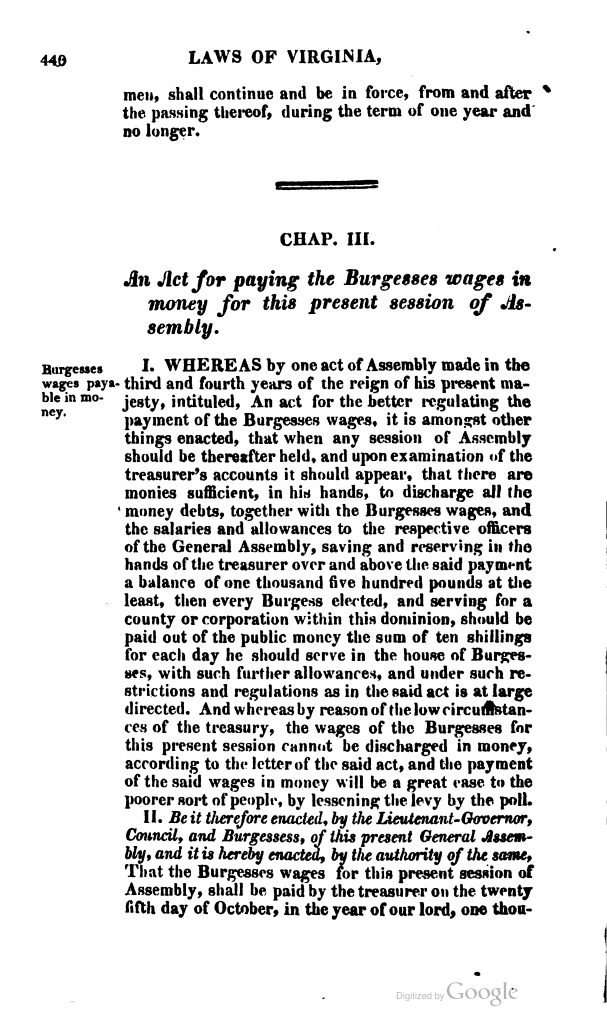 The Statutes at Large; Being a Collection of All the Laws of Virginia from the First Session of the Legislature, in the Year 1619, Volume 6, Page 440

men, shall continue and be in force, from and after the passing thereof, during the term of one year and no longer.