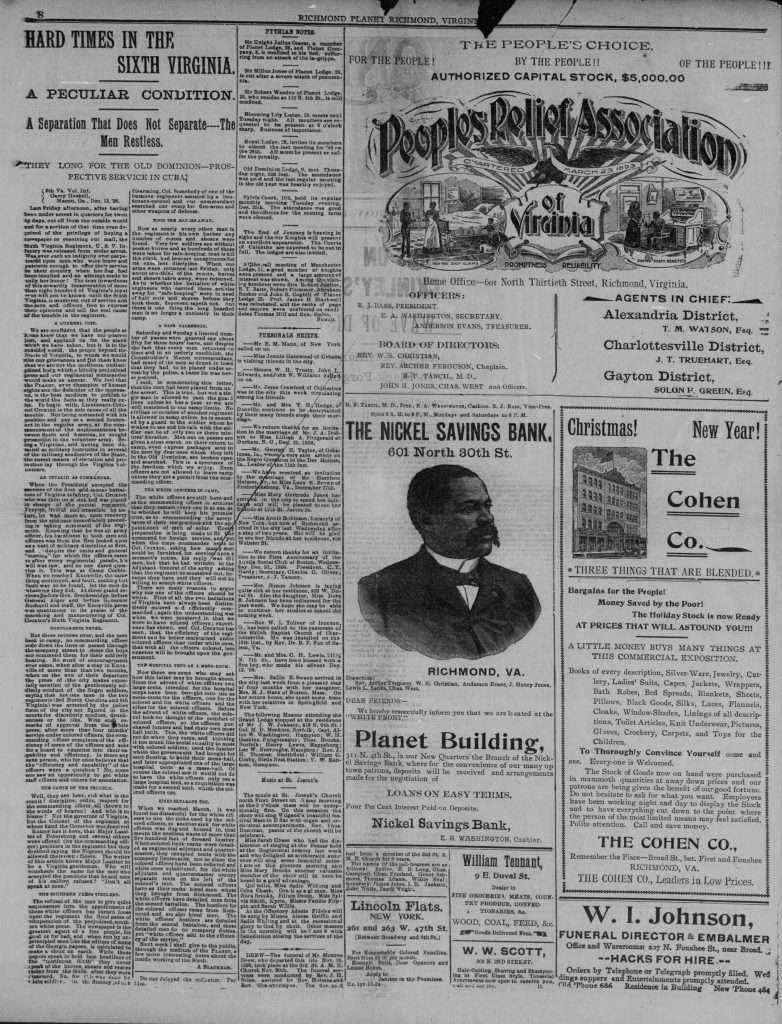 HARD TIMES IN THE SIXTH VIRGINIA.

Separation That Does not Separate—Men Restless.

THEY LONG FOR THE OLD DOMINION—PROSPECTIVE SERVICE IN CUBA

Last Friday afternoon, after having been under arrest in quarters for twenty days, cut off from the outside world and for a portion of that time even deprived of the privilege of buying a newspaper or receiving our mail, the Sixth Virginia Regiment, U.S.V. Infantry was released from under arrest. Was ever such an indignity ever perpetrated upon men who were brave and patriotic enough to offer their service to the country when her flag had been insulted and an attempt made to sully her honor! The true inwardness of this cowardly incarceration of more than eight hundred of Virginia’s loyal sons will not be known until the Sixth Virginia is mustered out of service and the men and officers free to express their opinions and tell the real cause of the trouble in the regiment.

We are confident that the people at home know that we have our quarrel just, and applaud us for the stand which we have taken, but it is to the outside world, the people beyond the limits of Virginia, to whom we would cite our grievances and let them know that we are not the mutinous, undisciplined body which a blindly prejudiced press and our regimental commander would make us appear. We feel that the Planet, ever champion of human rights and the defender of the oppressed, is the best medium to publish to the world the facts as they really exist. To begin with, Lieutenant-Colonel Croxton is the sole cause of all the trouble. Not being contented with his position and pay as a second lieutenant in the regular army, at the commencement of the unpleasantness between Spain and America, he sought promotion in the volunteer army. Being a Virginian, and having been detailed as military instructor in several of the military academies of the State, the surest means of elevation and promotion lay through the Virginia Volunteers.

an invalid as commander.

When the President accepted the services of the first and second battalions of Virginia infantry, Col. Croxton who was then on a sick bed was placed in charge of the partial regiment. Peevish, fretful and irrascible [sic] by nature, he was more so, upon recovery from the sickness immediately proceeding [h]is taking command of the regiment. Knowing that he was an army officer, his harshness to both men and officers was from the first looked upon as a part of military discipline at first, and despite the oaths and general “cussing” for which the officers came in after every regimental parade, his will was law, and no one dared question it. This was at Camp Corbin [near Richmond]. When we reached Knoxville, the same thing continued, and fault, nothing but fault was to be found, let the men do whatever they did. At three grand reviews before Gen. [Joseph C.] Breckenridge, before General [Russell A.] Alger and before Governor [Asa S.] Bushnell [of Ohio] and staff, the Knoxville press was unanimous in its praise of the marching and manoeuvering of Col. Croxton’s Sixth Virginia Regiment.

But these reviews over, and the men back in camp, no commanding officer rode down the lines or passed through the company street to cheer the boys nor commend them for their soldierly bearing. No word of encouragement ever came, when after a stay in Knoxville of more than two months, when on the even of their departure the press of the city makes especially mention of the gentlemanly soldierly conduct of the Negro soldiers, saying that not one man in the two regiments (3rd North Carolina and 6th Virginia) was arrested by the police force of the city nor figured in the courts for disorderly conduct, drunkenness or the like. With such remarks of approval from the white press, after more than four months’ service under colored officers, the commanding officer complains of the efficiency of some of the officers and asks for a board to examine into their capability and efficiency. Is there any sane person, who for once believes that the “efficiency and capability” of the officers were a question? No, some one saw an opportunity to get white staff officers and others for association.

the cause of the trouble.

Well, they are here, and what is the result? discipline, order, respect for the commanding officer, all thrown to the winds of heaven! And who is to blame? Not the governor of Virginia, but the Colonel of the regiment at whose hand the Governor was deceived[.]

Rumor has it here, that Major [Francis R.] Lassiter of Petersburg and several others were offered (by commanding officer) positions in the regiment but they declined saying the Negroes should be allowed their own officers. The writer of this article knows Major Lassiter to a be a Virginia gentleman. Who will vouchsafe the same for the men who accepted the positions that he and men of his calibre refused? “Don’t all speak at once.”

The refusal of the men to give quiet acquiescence into the appointment of these white officers has turned loose upon the regiment the flood gates of vituperation of the prejudiced southern white press The newspaper is the greatest agent of a free people, for good or for bad, and when run by unprincipled men like the editors of some of the Georgia papers, is calculated to make a sheol on earth. While these papers speak in bold face headlines of the “mutinous Sixth” they never speak of the knives, shears and razors stolen from the Sixth, after they were disarmed. No, for this was done by white soldiers. On the Sunday of our disarming, Col. Somebody of one of the immune regiments assisted by a lieutenant-colonel and our commandant searched our camp for fire-arms and other weapons of defense.

took the razors away.

Now as nearly every other man in the regiment is his own barber any number of razors and shears were found. Very few soldiers are without pocket knives and so hundreds of those were taken for safe-keeping, that is till the Sixth had become conspicuous for its excellent discipline. When our arms were returned last Friday, only about one-third of the razors, knives and shears taken away, were returned. As to whether the battalion of white engineers who carried these articles away for “safe-keeping” were in need of hair cuts and shaves before they took them, deponent sayeth not. But there is one thing the long bearded man is no longer a curiosity in their camp.

Saturday and Sunday a limited number of passes were granted say about fifty for three hours’ leave, and despite the fact that every man returned on time and in an orderly condition, the [Atlanta] Constitution’s Macon correspondent, had many of the men so drunk in town that they had to be placed under arrest by the police, a baser lie was never penned.

I said, in commencing this letter, that the men had been placed from under arrest. This is true, but not a single man is allowed to pass the guard lines unless he has a pass so we are still restricted to our camp limits. No civilians or member of another regiment is allowed in camp unless he is escorted by a guard to the soldier whom he wishes to see and his talk with the soldier can be of only two or three minutes’ duration. Men out on passes are given a close search on their return to camp, even express packages sent to the men by dear ones whom they left in the Old Dominion, are broken open and searched. This is a specimen of freedom which we enjoy. Even officers are not allowed to leave camp unless they get a permit from the commanding officer.

the white officers in camp.

The white officers are still here and as the commanding officer is anxious that they remain every one is at sea as to whether he will keep his promise true, as to recommending the acceptance of their resignations and the appointment of men of color. Every preparation is being made to fit the command for foreign service, and yet when the corps commander sent to Col. Croxton, asking how many men could be furnished for service upon a moment’s notice, his reply was 971 men, but that he had written to the Adjutant General of the army asking that the regiment be mustered out, because they have said they will not be willing to accept white officers.

There are many reasons to argue why nor one of the officers should be white. First of all the two battalions of Virginia have always been distinctively colored and efficiently commanded; again the understanding was when we were mustered in that we were to have colored officers; experience has shown, and Col. Croxton has seen, that the efficiency of the regiment can be better maintained under colored officers than under white ones, that with all the officers colored, less expense will be brought upon the government.

the hospital tent as a mess-room.

Next week I shall give the public, though the medium of the Planet, a few more interesting notes about the inside working of the Sixth.

An Act for raising levies and recruits to serve in the present expedition against the French, on the Ohio (October 1754) An Act for better regulating and training the Militia (August 1755) An act for regulating and disciplining the Militia (May 5, 1777) “At Work for the Prizes,” Washington Post (May 27, 1887) Proclamation 412: Calling Forth Volunteers to Serve in the War with Spain (April 23, 1898) Proclamation 415: Calling Forth Additional Volunteers to Serve in the War with Spain (May 25, 1898) “Frivolous Reasons,” Richmond Planet (June 11, 1898) “The Griffin Episode,” Atlanta Constitution (March 19, 1899) “Griffin Men Did Their Duty in Checking Drunken Negroes,” Atlanta Constitution (March 10, 1899)