Skip to content
Author: William GoochTranscription Source: Emory G. Evans, “A Question of Complexion: Documents concerning the Negro and the Franchise in Eighteenth-Century Virginia,” The Virginia Magazine of History and Biography 71, no. 4 (Oct. 1963), 411–415.
FULL TEXT 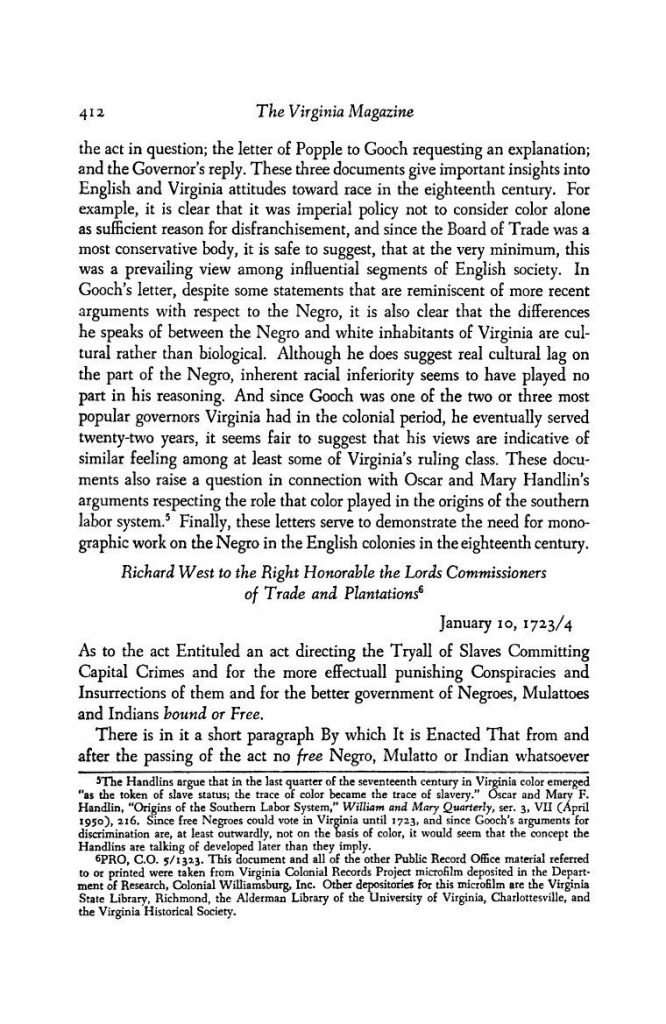 As to the act Entituled an act directing the Tryall of Slaves Committing Capital Crimes and for the more effectuall punishing Conspiracies and Insurrections of them and for the better government of Negroes, Mulattoes and Indians bound or Free.

There is in it a short paragraph By which It is Enacted That from and after the passing of the act no free Negro, Mulatto or Indian whatsoever 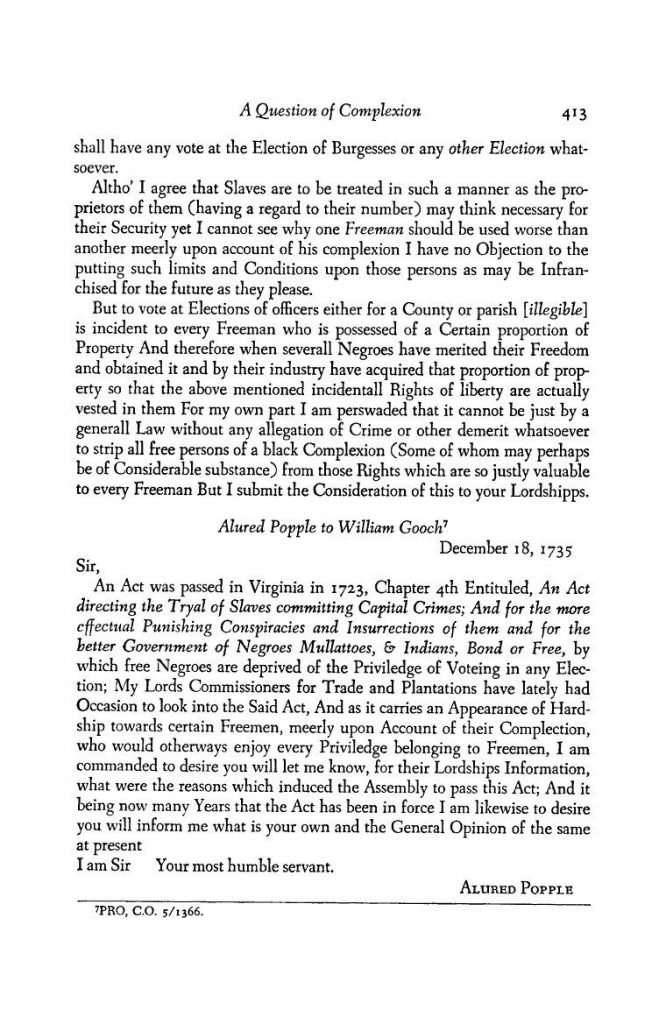 shall have any vote at the Election of Burgesses or any other Election whatsoever.

Altho’ I agree that Slaves are to be treated in such a manner as the proprietors of them (having a regard to their number) may think necessary for their Security yet I cannot see why one Freeman should be used worse than another meerly upon account of his complexion I have no Objection to the putting such limits and Conditions upon those persons as may be Infranchised for the future as they please.

But to vote at Elections of officers either for a County or parish [illegible] is incident to every Freeman who is possessed of a Certain proportion of Property And therefore when severall Negroes have merited their Freedom and obtained it and by their industry have acquired that proportion of property so that the above mentioned incidentall Rights of liberty are actually vested in them For my own part I am perswaded that it cannot be just by a generall Law without any allegation of Crime or other demerit whatsoever to strip all free persons of a black Complexion (Some of whom may perhaps be of Considerable substance) from those Rights which are so justly valuable to every Freeman But I submit the Consideration of this to your Lordshipps.

An Act was passed in Virginiain I723, Chapter 4th Entituled, An Act Directing the Tryal of Slaves committing Capital Crimes; And for the more effectual Punishing Conspiracies and Insurrections of them and for the better Government of Negroes Mullattoes, & Indians, Bond or Free, by which free Negroes are deprived of the Priviledge of Voteing in any Election; My Lords Commissioners for Trade and Plantations have lately had Occasion to look into the Said Act, And as it carries an Appearance of Hardship towards certain Freemen, merely upon Account of their Complection, who would otherways enjoy every Priviledge belonging to Freemen, I am commanded to desire you will let me know, for their Lordships Information, what were the reasons which induced the Assembly to pass this Act; And it being now many Years that the Act has been in force I am likewise to desire you will inform me what is your own and the General Opinion of the same at present

I am Sir Your Most humble servant. 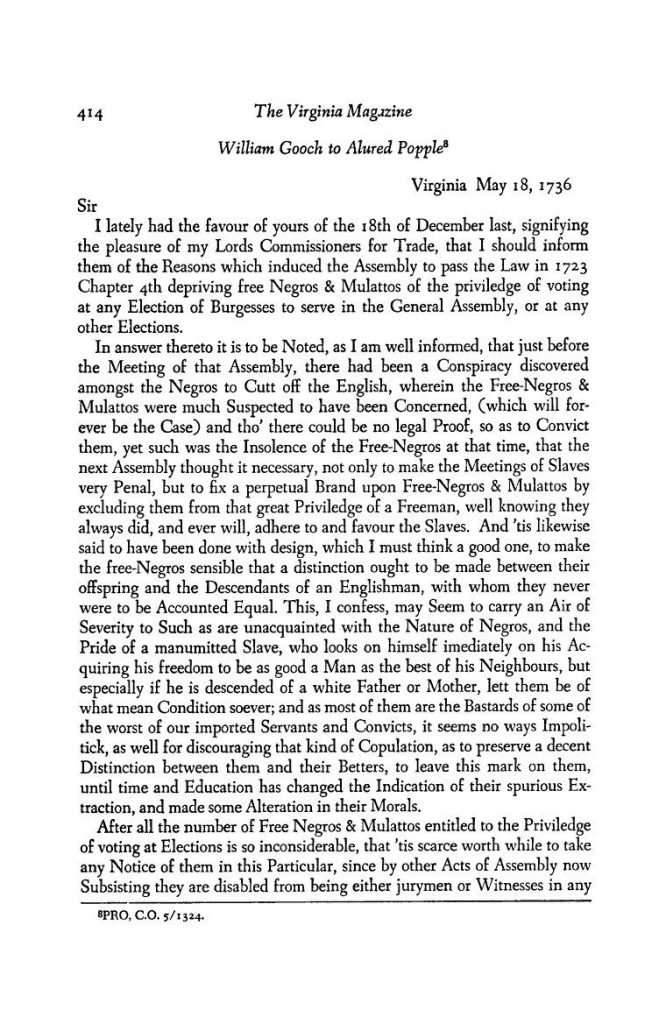 I lately had the favour of yours of the 18th of December last, signifying the pleasure of my Lords Commissioners for Trade, that I should inform them of the Reasons which induced the Assembly to pass the Law in 1723 Chapter 4th depriving free Negros & Mulattos of the priviledge of voting at any Election of Burgesses to serve in the General Assembly, or at any other Elections.

In answer thereto it is to be Noted, as I am well informed, that just before the Meeting of that Assembly, there had been a Conspiracy discovered amongst the Negros to Cutt off the English, wherein the Free-Negros & Mulattos were much Suspected to have been Concerned, (which will forever be the Case) and tho’ there could be no legal Proof, so as to Convict them, yet such was the Insolence of the Free-Negros at that time, that the next Assembly thought it necessary, not only to make the Meetings of Slaves very Penal, but to fix a perpetual Brand upon Free-Negros & Mulattos by excluding them from that great Priviledge of a Freeman, well knowing they always did, and ever will, adhere to and favour the Slaves. And ’tis likewise said to have been done with design, which I must think a good one, to make the free-Negros sensible that a distinction ought to be made between their offspring and the Descendants of an Englishman, with whom they never were to be Accounted Equal. This, I confess, may Seem to carry an Air of Severity to Such as are unacquainted with the Nature of Negros, and the Pride of a manumitted Slave, who looks on himself imediately on his Acquiring his freedom to be as good a Man as the best of his Neighbours, but especially if he is descended of a white Father or Mother, lett them be of what mean Condition soever; and as most of them are the Bastards of some of the worst of our imported Servants and Convicts, it seems no ways Impolitick, as well for discouraging that kind of Copulation, as to preserve a decent Distinction between them and their Betters, to leave this mark on them, until time and Education has changed the Indication of their spurious Extraction, and made some Alteration in their Morals.

After all the number of Free Negros & Mulattos entitled to the Priviledge of voting at Elections is so inconsiderable that ’tis scarce worth while to take any Notice of them in this Particular, since by other Acts of Assembly now Subsisting they are disabled from being either jurymen or Witnesses in any 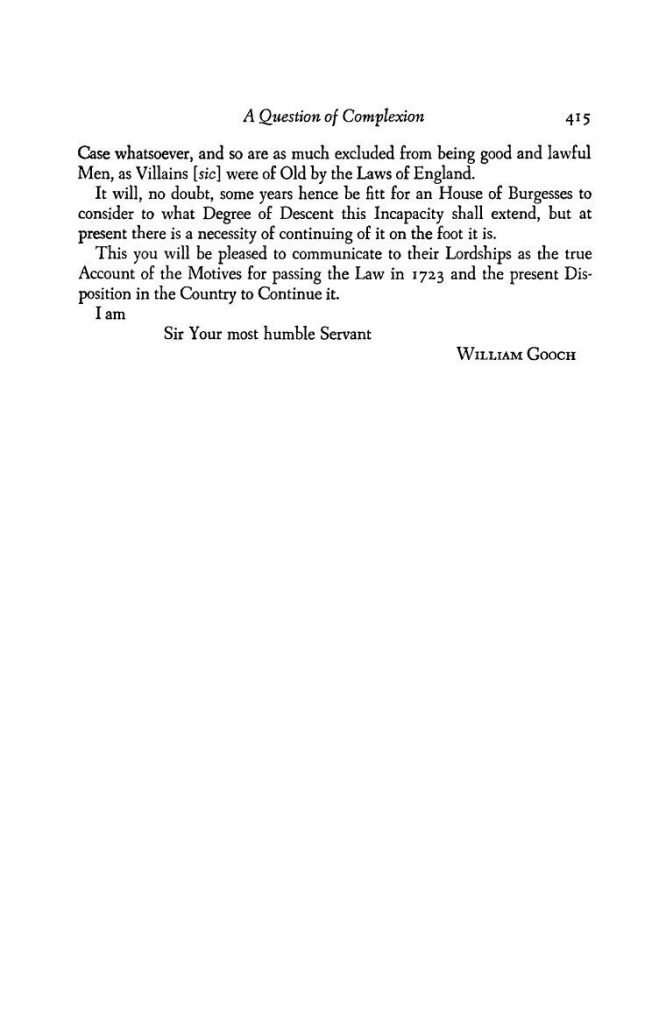 Case whatsoever, and so are as much excluded from being good and lawful Men, as Villains [sic] were of Old by the Laws of England.

It will, no doubt, some years hence be fitt for an House of Burgesses to consider to what Degree of Descent this Incapacity shall extend, but at present there is a necessity of continuing of it on the foot it is.

This you will be pleased to communicate to their Lordships as the true Account of the Motives for passing the Law in 1723 and the present Disposition in the County to Continue it.

Sir Your most humble Servant

RELATED CONTENT
Categories:
Type:
MAP
TIMELINE
January 10, 1724
Richard West, the Board of Trade's legal counsel, raises the question of the appropriateness of a law in Virginia denying free blacks the right to vote.
May 19, 1735
Responding to Richard West's letter of 1724, Alured Popple writes Virginia lieutenant governor William Gooch asking for an explanation for the 1723 law denying free blacks in Virginia the right to vote.
FURTHER READING

General Court Responds to Runaway Servants and Slaves (1640) Runaway Slaves (1642–1643) “English running away with negroes” (1660–1661) “Women servants whose common imployment is working in the ground to be accompted tythable” (1662) “Negro womens children to serve according to the condition of the mother” (1662) “An act prohibiting servants to goe abroad without a lycense” (1663) “An act declaring that baptisme of slaves doth not exempt them from bondage” (1667) “Negro women not exempted from tax” (1668) “Against Runawayes” (1669) “An act concerning runaways” (1669–1670) “An act concerning Servants and Slaves” (1705) “Act directing the trial of Slaves, committing capital crimes; and for the more effectual punishing conspiracies and insurrections of them; and for the better government of Negros, Mulattos, and Indians, bond or free” (1723)