DONATE
Author: General AssemblyTranscription Source: William Waller Hening, ed., The Statutes at Large; Being a Collection of All the Laws of Virginia from the First Session of the Legislature, in the Year 1619 (New York: R. & W. & G. Bartow, 1823), 2:260.
FULL TEXT 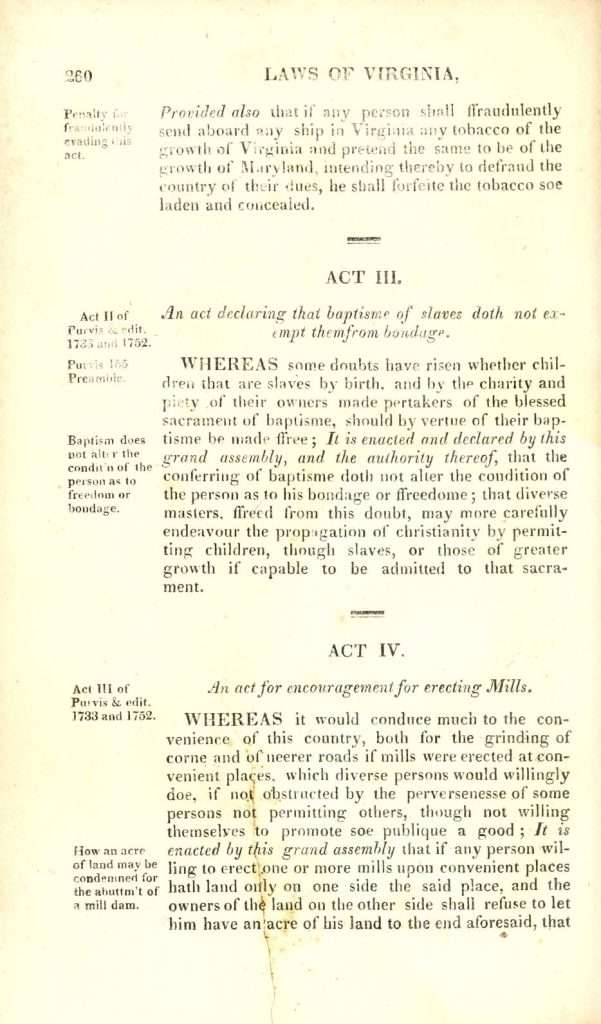 WHEREAS some doubts have risen whether children that are slaves by birth, and by the charity and piety of their owners made pertakers of the blessed sacrament of baptisme, should be vertue of their baptisme be made ffree; It is enacted and declared by this grand assembly, and the authority thereof, that the conferring of baptisme doth not alter the condition of the person as to his bondage or ffreedome; that diverse masters, ffreed from this doubt, may more carefully endeavor the propagation of christianity by permitting children, though slaves, or those of greater growth if capable to be admitted to that sacrament.

RELATED CONTENT
Categories:
Type:
MAP
TIMELINE
September 1667
The General Assembly passes "An act declaring that baptisme of slaves doth not exempt them from bondage" in an attempt to better define the conditions by which people were enslaved or free.
FURTHER READING

Runaway Slaves (1642–1643) Court Ruling on Anthony Johnson and His Servant (1655) “A Report of a Comittee from an Assembly Concerning the freedome of Elizabeth Key” (1656) Phillip Mongom Accused of Stealing Hogs (1659–1660) “English running away with negroes” (1660–1661) “Negro womens children to serve according to the condition of the mother” (1662) “Women servants whose common imployment is working in the ground to be accompted tythable” (1662) “Negro women not exempted from tax” (1668) “An act concerning Servants and Slaves” (1705) “Act directing the trial of Slaves, committing capital crimes; and for the more effectual punishing conspiracies and insurrections of them; and for the better government of Negros, Mulattos, and Indians, bond or free” (1723) Denying Free Blacks the Right to Vote (1724, 1735)