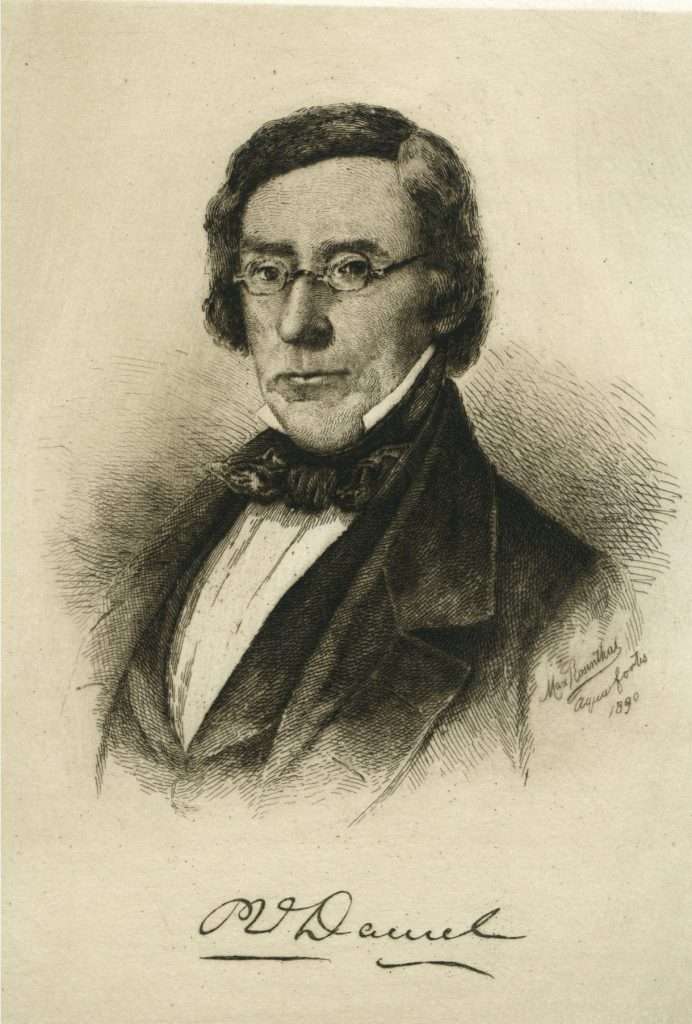 Peter Vivian Daniel was born on April 17, 1818, in Henrico County at the country farm of his parents, Peter V. Daniel, then a member of the Council of State and later an associate justice of the Supreme Court of the United States, and his first wife, Lucy Randolph Daniel. His maternal grandfather was Edmund Randolph, a former governor and attorney general of the United States. While Daniel was growing up, his cousin Raleigh Travers Daniel, who became a member of the Council of State and attorney general of Virginia, lived in the Daniel household and studied law with Daniel’s father.

Peter V. Daniel Jr., as he always identified himself even after the death of his father, was privately educated until age eighteen, when he decided to become a civil engineer. He worked for several years for his kinsman Moncure Robinson during the construction of the Louisa Railroad Company line and the initial surveying and construction of the Richmond and Petersburg Railroad Company line. Daniel then studied law under his father’s direction and qualified to practice on March 10, 1843. While practicing in Richmond he took part in civic affairs. At a conference on education in August 1845 he offered resolutions requesting that the General Assembly establish a statewide system of public schools. In December 1854 he was the founding president of the Richmond Young Men’s Christian Association. The following year Daniel wrote a preface to and reprinted A Vindication of Edmund Randolph, which his grandfather had published in 1795 after being dismissed from the president’s cabinet. On December 1, 1846, in Philadelphia, Daniel married Mary Robertson. They had one son and one daughter. After his father died in 1860, Daniel became the guardian of his two orphaned half siblings.

On May 31, 1853, Daniel was elected president of the Richmond and Petersburg Railroad Company. He oversaw the refinancing of its debt and replaced old track with new, heavy-duty rails. He rebuilt a spur to Port Walthall, on the James River, which for a time was the terminus of connecting steamboat service that carried passengers to and from Norfolk. The Richmond and Petersburg Railroad leased the twenty-one-mile Clover Hill Railroad that transported coal from the fields of western Chesterfield County to the main line north of Petersburg.

Daniel was elected president of the allied Richmond, Fredericksburg, and Potomac Railroad Company on June 18, 1860, to succeed Edwin Robinson, a brother of Moncure Robinson. The RF&P operated seventy-five miles of track from Richmond to a wharf at Aquia Creek in Stafford County. Passengers to and from Washington, D.C., traveled between that city and the railroad terminus on steamboats of the railroad’s Potomac Steamboat Company. On April 19, 1861, two days after Virginia seceded from the Union, the federal government seized four of the steamboats and ended connecting service between Aquia Creek and Washington.

Railroad Repairs During the Civil War

Throughout the Civil War, Daniel strove to keep the railroad running. Raids on its track and bridges required constant repair and rebuilding, and Daniel and executives of other railroads had to combat proposals to employ old iron rails for other purposes, such as construction of naval vessels. Daniel estimated in the spring of 1863 that Virginia’s railroads needed more than 4,000 tons of iron rails each month to keep operating. The RF&P and four other Virginia railroads jointly sent an agent to England to procure supplies. Daniel cooperated with the Confederate government and army to keep troops and supplies moving while lobbying Confederate congressmen and bureaucrats in opposition to proposals that the Confederacy’s railroads be operated under government or military authority. In 1863 he cut salaries and dismissed laborers as a result of reduced traffic on the truncated line, but he also argued that railroad employees should be exempt from conscription. RF&P men formed Company G of the 19th Virginia Regiment militia under the command of Captain Samuel Ruth, superintendent of the railroad. Unknown to Daniel or to the Confederate government, Ruth was a secret agent of the United States and was able throughout the war to slow the movement of trains at vital times. 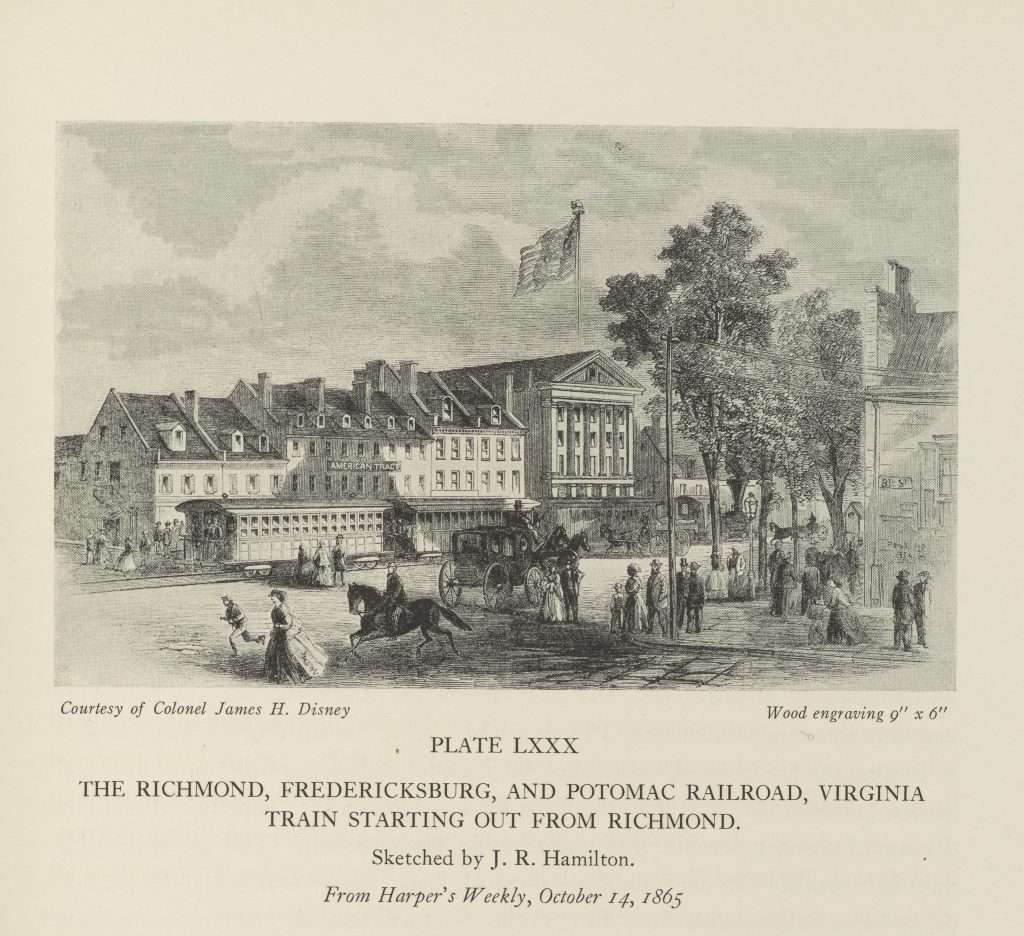 The Richmond, Fredericksburg, and Potomac Railroad, Virginia Train Starting Out From Richmond.

Because Daniel possessed more than $20,000 in personal property at the end of the Civil War, he applied for and on July 3, 1865, received a presidential pardon. Ruth asserted that Daniel had been an early advocate of secession, but Daniel maintained that he operated the railroad as a commercial enterprise and had kept known Unionists on the job during the war. After the war, the RF&P borrowed $100,000 at 8 percent interest to finance reconstruction of the railroad and hired E. T. D. Myers, a former major in the Confederate army, to direct the work. The railroad resumed service between Richmond and Aquia Creek in September 1865. Daniel reported at the annual stockholders meeting in 1866 that with the collapse of the Confederacy the company and its stockholders had lost $700,000, including a large award in Confederate securities that the RF&P had received in 1863 after successfully suing the Orange and Alexandria Railroad for operating a competing mail service in violation of the RF&P’s charter. In the spring of 1866 the RF&P joined the Richmond and Petersburg Railroad in a venture to build and operate a 1.25-mile connection between the two lines in Richmond.

At the RF&P’s annual meetings in November 1867 and 1868, Daniel reported that the company’s income remained low, an occurrence he attributed to a general business depression. He also successfully fended off what he believed was an attempt by officers of the recently chartered Alexandria and Fredericksburg Railroad Company to acquire a controlling interest in the RF&P. Early in 1871 Daniel also became president of the Potomac Railroad Company, which constructed a short connecting line between Quantico Creek and the RF&P’s northern terminus that enabled passenger trains beginning in May 1872 to run directly from Richmond to Alexandria. The RF&P then discontinued its steamboat service at Aquia Creek.

Daniel declined reelection to another term as president of the RF&P in December 1871 but remained president of the Potomac Railroad until 1880. He served as general counsel of the RF&P for several years after he left its presidency and then returned to the private practice of law for about two years before poor health forced him to retire. Daniel died of the effects of paralysis, possibly after suffering a stroke, at his Richmond home on April 2, 1889. He was buried in the city’s Hollywood Cemetery.