Blackford was born on January 3, 1931, in Charlottesville, Virginia, to Staige Davis Blackford (1898–1949) and Lydia Fishburne Blackford. Raised in Charlottesville, Blackford attended the Episcopal High School and the University of Virginia. As an undergraduate, Blackford served as president of the Raven Society, an organization dedicated to preserving the memory of Edgar Allan Poe, who briefly attended the university, and to the achievement of scholarship and academic excellence. Blackford also worked as editor-in-chief of the Cavalier Daily, the University of Virginia’s student-run newspaper. In 1952, he ran an editorial titled “Scholastic Segregation” that challenged the university’s policy of segregation. This editorial led to the first public debate on desegregation at the University of Virginia.

Graduating in 1952 with honors, Blackford went on to receive a second bachelor’s degree as a Rhodes Scholar at Oxford University, completing his degree in 1954. Blackford then departed briefly from scholarly pursuits in order to serve in the United States Air Force and the CIA for several years. Following this stint, Blackford returned to his writing and editing roots, working for Time magazine and, later, as editor of the Louisiana State University Press. In 1958, Blackford married Bettina Balding, with whom he later had two daughters, Linda Balding and Sheila Mason.

Early in the 1960s, Blackford continued the civil rights work he began at the Cavalier Daily by taking a job as research director for the Southern Regional Council, a civil rights organization. In 1964, Blackford relocated to Norfolk, where he took a post as chief political reporter for the Virginian-Pilot. It was during this time that Blackford met Linwood Holton—a largely left-leaning Republican candidate for governor of Virginia. This association led lifelong Democrat Blackford to take a position in Holton’s administration as press secretary and speech writer from 1970 until 1974. Blackford has been credited with greatly influencing Holton’s progressive racial politics during what was a difficult period in the history of race relations in the United States. Blackford has said that he was happiest in his professional life during his time working in the political sphere. 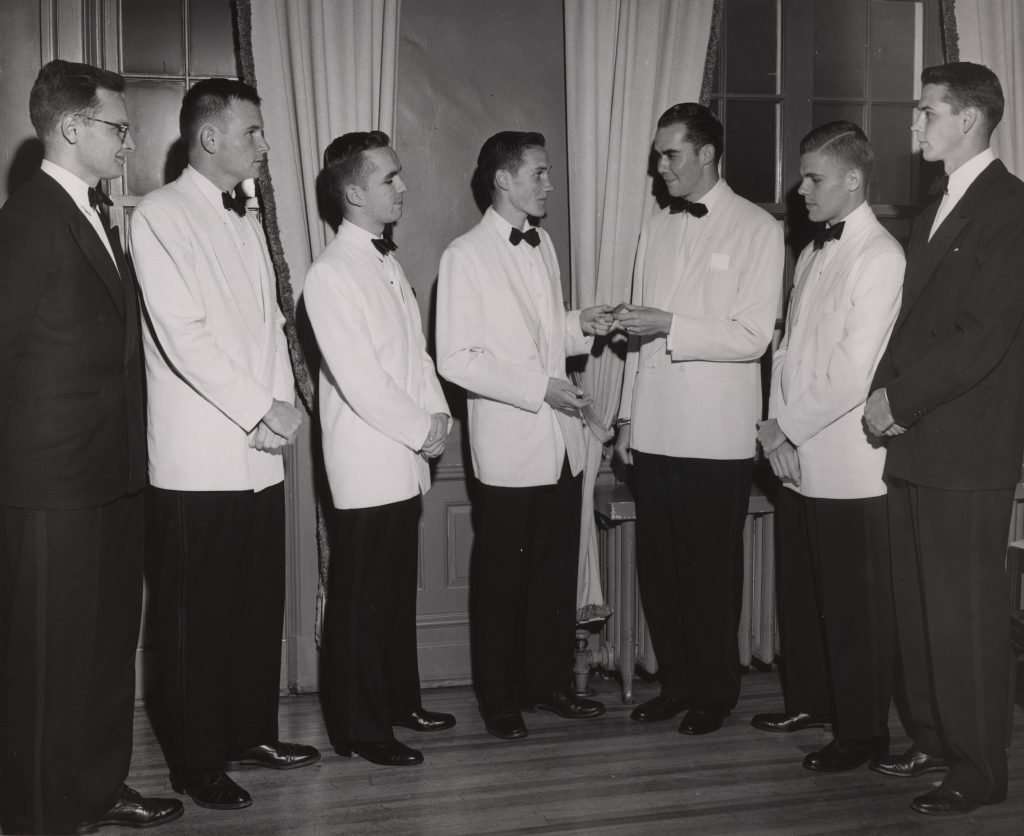 Raven Society Initiation at the University of Virginia

In 1975, after completing his term with Holton, Blackford returned to Charlottesville and became editor of the University of Virginia’s Virginia Quarterly Review. Blackford’s predecessors included Charlotte Kohler, James Southall Wilson, Stringfellow Barr, and Lambert Davis (who is probably best known as Robert Penn Warren’s editor for All the King’s Men). A notable academic literary journal, VQR had already gained national stature before Blackford took it over. In an interview, Blackford explained, “I inherited from [the previous editor] one of our foremost intellectual beacons and my job is to keep that beacon shining.”

Tasked with respecting the successful history of the journal, Blackford made few big changes, yet he managed to develop the journal into a highly regarded publication, which, over the years, showcased such writers as Ann Beattie, Nancy Hale, William Hoffman, Ward Just, Joyce Carol Oates, Robert Olen Butler, and Peter Taylor, and gained even greater fame for running a previously unpublished short story by William Faulkner.

On June 23, 2003, one week before he was set to retire, Blackford died in a car accident in Charlottesville. He left behind three projects on which he was about to begin work: writing his memoir, a book for those suffering from problems with vision (as he was), and a biography of Virginius Dabney.