William Cuthbert Falkner was born on September 25, 1897, in New Albany, Mississippi, to Murry Cuthbert Falkner, a railroad worker, and Maud Butler, a housewife. William was raised in Oxford, Mississippi, and, in 1915, left high school to work as a bookkeeper. Longing for adventure, he joined the Canadian Royal Air Force in 1918 by changing the spelling of his name to the British-sounding Faulkner. Faulkner entered the University of Mississippi in 1919 but withdrew in 1920. He then held various jobs in New York and Mississippi until 1924.

Faulkner’s first published novel, Soldier’s Pay (1926), drew on his experiences in World War I (1914–1918), while Mosquitoes (1927) examined literary life in New Orleans (in 1925, Faulkner lived there with the writer Sherwood Anderson). Faulkner married Lida Estelle Oldham Franklin on June 20, 1929—she had divorced her husband to marry Faulkner and brought two children of her own to the marriage—and they later had two daughters, Alabama, who died nine days after being born, and Jill. 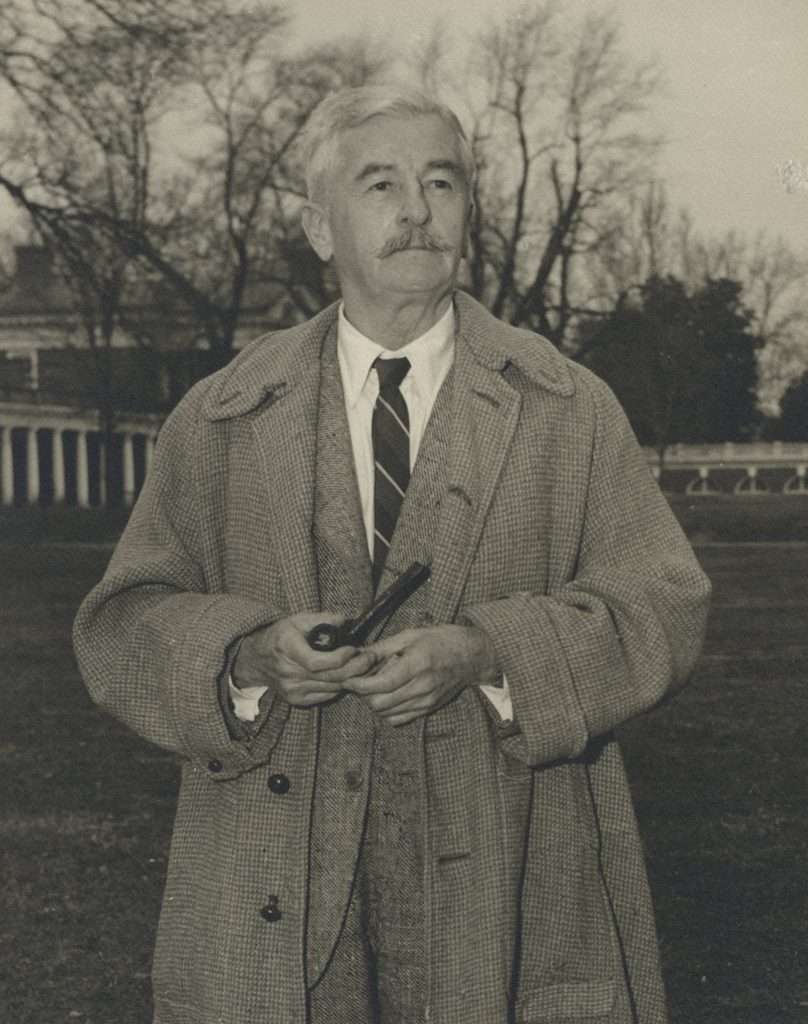 William Faulkner on the Lawn

Faulkner’s critical and artistic ascendancy did not begin until the publication of The Sound and the Fury in 1929. Citing Faulkner’s use of multiple narrators, critics marveled at the text’s loose-limbed experimentalism, in which the author tells his story of the despairing, declining Compson family four separate times but never from the perspective of the character at the novel’s center, Caddy. This was Pablo Picasso’s Cubism in the form of novel-writing, only instead of Ernest Hemingway’s virile hunters or James Joyce’s Dubliners, one gets the rotting, rural underbelly of the New South. In As I Lay Dying (1930), Faulkner presented the journey of the Bundren family to bury their mother in fifty-nine chapters—one consisting of only a single, confusing sentence: “My mother is a fish”—and in fifteen different voices.

In addition to his work as a novelist, Faulkner earned a living during the 1930s and 1940s by writing movie screenplays based on his own fiction as well as that of other writers, including Hemingway’s To Have and Have Not (1937) and Raymond Chandler’s detective story The Big Sleep (1939). Faulkner’s later work was not all commercially or even critically successful, but he continued to be recognized, winning the Nobel Prize, two Pulitzer Prizes (the second posthumously), and, in 1955, the National Book Award.

Though he lived most of his life at his Rowan Oak house in Oxford, Faulkner was writer-in-residence at the University of Virginia from 1957 until 1958, a position he accepted in part because his daughter and her family were living nearby. Portions of his lectures at the university are recorded in Faulkner in the University (1959) and William Faulkner: Essays, Speeches and Public Letters (1966). Faulkner bought a house in Charlottesville in 1959 and finished a trilogy he had begun with The Hamlet (1940), completing The Town (1957) and The Mansion (1959). From 1961 until his death, Faulkner taught American Literature at the University of Virginia. His last novel, The Reivers (1962), describes a boy’s transition into adulthood.

Faulkner died on July 6, 1962, of a heart attack in Byhalia, Mississippi. He willed the major manuscripts and personal papers in his possession to the Albert and Shirley Small Special Collections Library at the University of Virginia. In addition, in 1998 and 2000, his daughter, Jill Faulkner Summers, a resident of Charlottesville, donated two portions of his personal library to the University of Virginia collection.