Skip to content
Author: General AssemblyTranscription Source: William Waller Hening, ed., The Statutes at Large; Being a Collection of All the Laws of Virginia from the First Session of the Legislature in the Year 1619 (Richmond: Franklin Press, 1820), 4:475–478.
FULL TEXT
— page 475 — 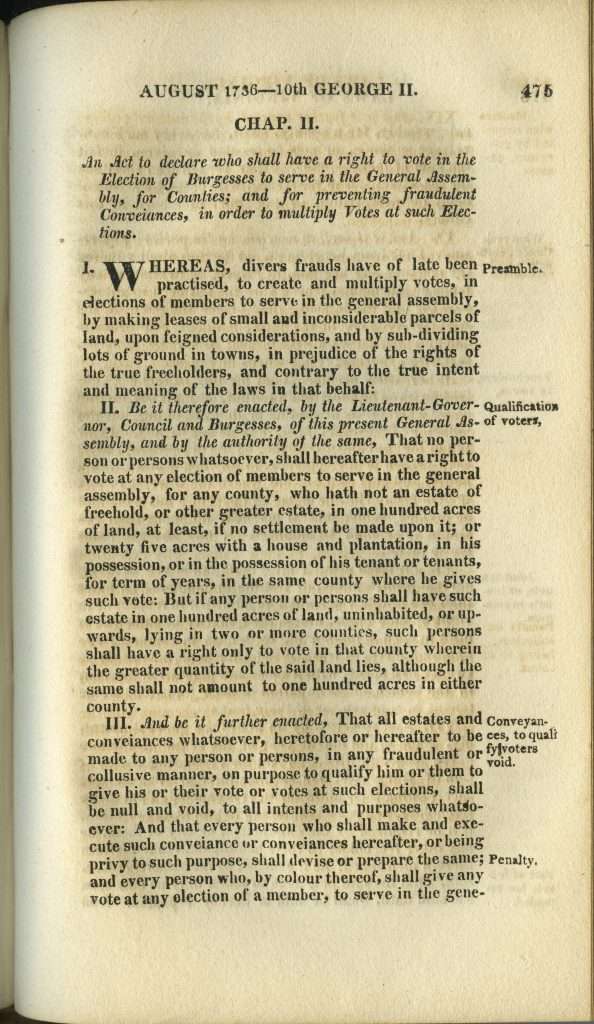 I. WHEREAS, divers frauds have of late been practised, to create and multiply votes, in elections of members to serve in the general assembly, by making leases of small and inconsiderable parcels of land, upon feigned considerations, and by sub-dividing lots of ground in towns, in prejudice of the rights of the true freeholders, and contrary to the true intent and meaning of the laws in that behalf:

II. Be it therefore enacted, by the Lieutenant-Governor, Council and Burgesses, of this present General Assembly, and by the authority of the same, That no person or persons whatsoever, shall hereafter have a right to vote at any election of members to serve in the general assembly, for any county, who hath not an estate of freehold, or other greater estate, in one hundred acres of land, at least, if no settlement be made upon it; or twenty five acres with a house and plantation, in his possession, or in the possession of his tenant or tenants, for term of years, in the same county where he gives such vote: But if any person or persons shall have such estate in one hundred acres of land, uninhabited, or upwards, lying in two or more counties, such persons shall have a right only to vote in that county wherein the greater quantity of the said land lies, although the same shall not amount to one hundred acres in either county.

III. And be it further enacted, That all estates and conveiances whatsoever, heretofore or hereafter to be made to any person or persons, in any fraudulent or collusive manner, on purpose to qualify him or them to give his or their vote or votes at such elections, shall be null and void, to all intents and purposes whatsoever: And that every person who shall make and execute such conveiance or conveiances hereafter, or being privy to such purpose, shall devise and prepare the same; and every person who, by colour thereof, shall give any vote at any election of a member, to serve in the gene- 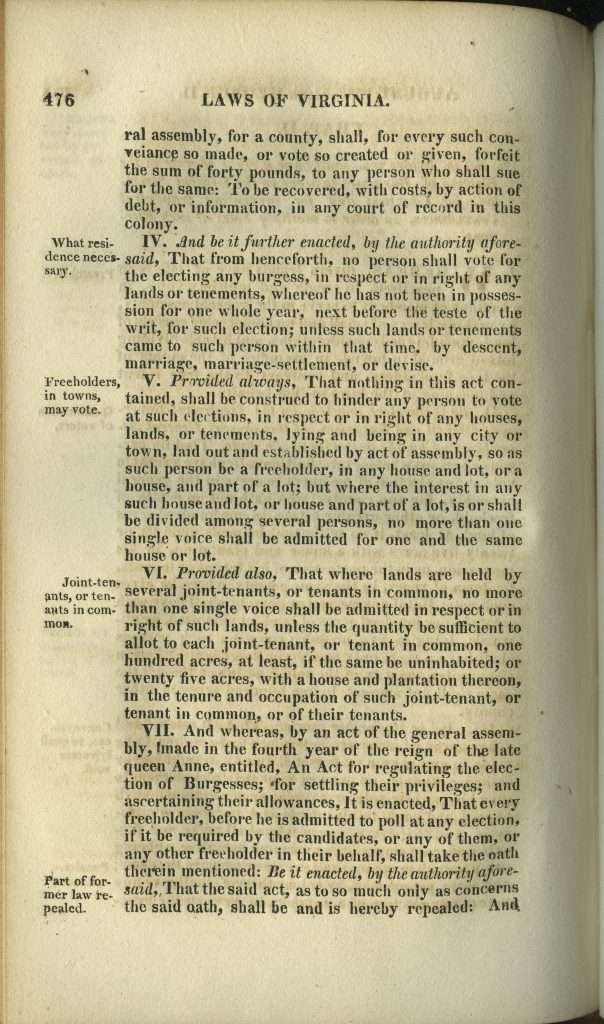 ral assembly, for a county, shall, for every such conveiance so made, or vote so created or given, forfeit the sum of forty pounds, to any person who shall sue for the same: To be recovered, with costs, by action of debt, or information, in any court of record in this colony.

IV. And be it further enacted, by the authority aforesaid, That from henceforth, no person shall vote for the electing any burgess, in respect or in right of any lands or tenements, whereof he has not been in possession for one whole year, next before the teste of the writ, for such election; unless such lands or tenements came to such person within that time, by descent, marriage, marriage-settlement, or devise.

V. Provided always, That nothing in this act contained, shall be construed to hinder any person to vote at such elections, in respect or in right of any houses, lands, or tenements, lying and being in any city or town, laid out and established by act of assembly, so as such person be a freeholder, in any house or lot, or a house, and part of a lot; but where the interest in any such house and lot, or house and part of a lot, is or shall be divided among several persons, no more than one single voice shall be admitted for one and the same house or lot.

VII. And whereas, by an act of the general assembly, made in the fourth year of the reign of the late queen Anne, entitled, An Act for regulating the election of Burgesses; for settling their privileges; and ascertaining their allowances, It is enacted, That every freeholder, before he is admitted to poll at any election, if it be required by the candidates, or any of them, or any other freeholder in their behalf, shall take the oath therein mentioned: Be it enacted, by the authority aforesaid, That the said act, as to so much only as concerns the said oath, shall be and is hereby repealed: And 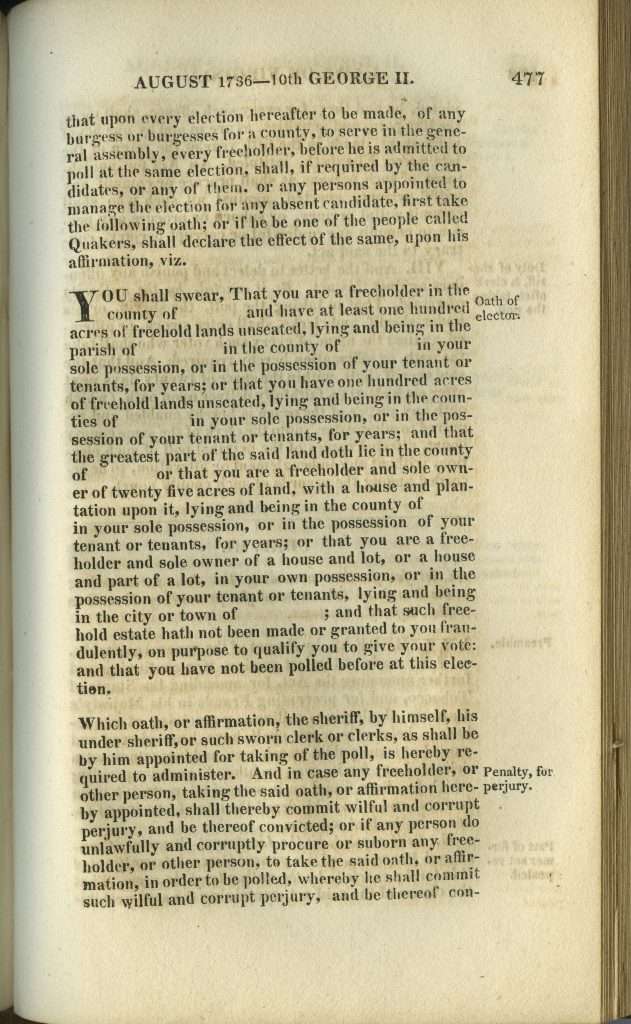 that upon every election hereafter to be made, of any burgess or burgesses for a county, to serve in the general assembly, every freeholder, before he is admitted to poll at the same election, shall, if required by the candidates, or any of them, or any persons appointed to manage the election for any absent candidate, first take the following oath; or if he be one of the people called Quakers, shall declare the effect of the same, upon his affirmation, viz. 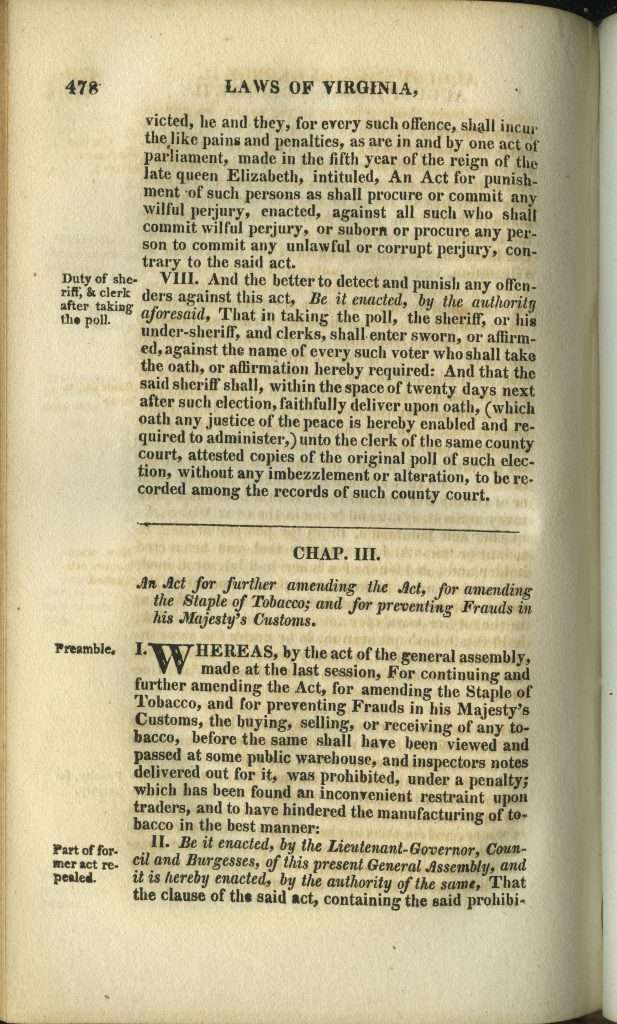 victed, he and they, for every such offence, shall incur the like pains and penalties, as are in and by one act of parliament, made in the fifth year of the reign of the late queen Elizabeth, intituled, An Act for punishment of such persons as shall procure or commit any wilful perjury, enacted, against all such who shall commit wilful perjury, or suborn or procure any person to commit any unlawful or corrupt perjury, contrary to the said act.

VIII. And to the better to detect and punish any offenders against the act, Be it enacted, by the authority aforesaid, That in taking the poll, the sheriff, or his under-sheriff, and clerks, shall enter sworn, or affirmed, against the name of every such voter who shall take the oath, or affirmation hereby required: And that the said sheriff shall, within the space of twenty days next after such election, faithfully deliver upon oath, (which oath any justice of the peace is hereby enabled and required to administer,) unto the clerk of the same county court, attested copies of the original poll of such election, without any imbezzlement or alteration, to be recorded among the records of such county court.

RELATED CONTENT
Categories:
Type:
MAP
TIMELINE
August 1736
The General Assembly passes "An Act to declare who shall have a right to vote in the Election of Burgesses to serve in the General Assembly, for Counties; and for preventing fraudulent Conveiances, in order to multiply Votes at such Elections," outlining property requirements for voting.
FURTHER READING