Skip to content
Author: General AssemblyTranscription Source: William Waller Hening, ed., The Statutes at Large; Being a Collection of All the Laws of Virginia from the First Session of the Legislature in the Year 1619 (New York: R. & W. & G. Bartow, 1823), 2:280.
FULL TEXT 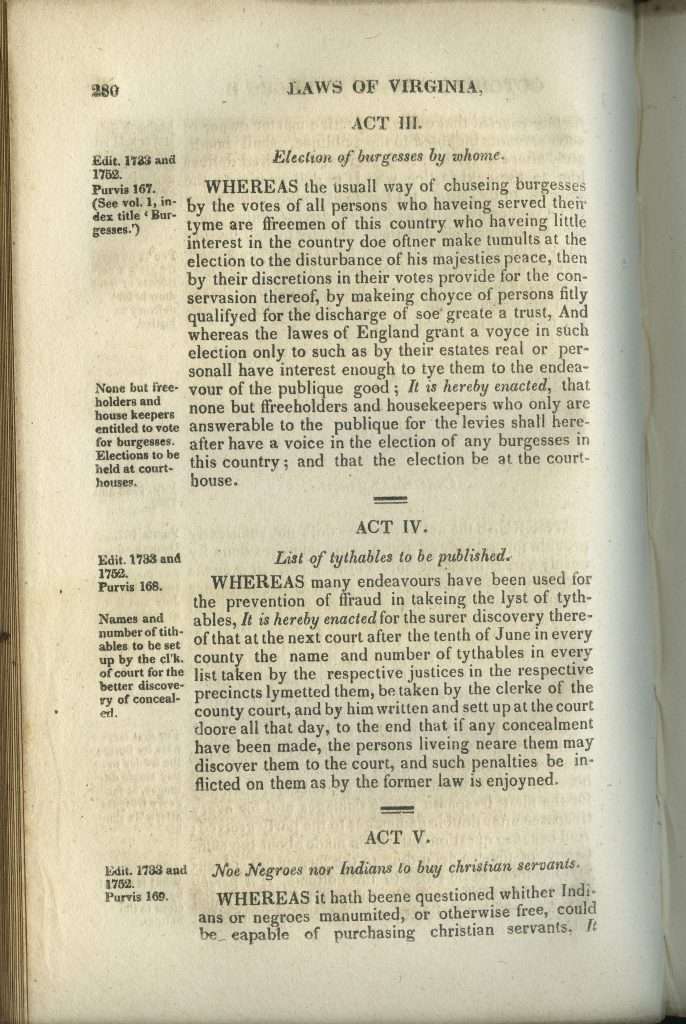 WHEREAS the usuall way of chuseing burgesses by the votes of all persons who haveing served their tyme are ffreemen of this country who haveing little interest in the country doe oftner make tumults at the election to the disturbance of his majesties peace, then by their discretions in their votes provide for the conservasion thereof, by makeing choyce of persons fitly qualifyed for the discharge of soe greate a trust, And whereas the lawes of England grant a voyce in such election only to such as by their estates real or personall have interest enough to tye them to the endeavour of the publique good; It is hereby enacted, that none but ffreeholders and housekeepers who only are answerable to the publique for the levies shall hereafter have a voice in the election of any burgesses in this country; and that the election be at the courthouse.

Defining the Franchise (1646) Defining the Franchise (1655) Defining the Franchise (1656) “An act enabling freemen to vote for burgesses and preventing false returnes of burgesses” (1676) “An act declaring all the acts, orders and proceedings of a grand assembly held att James Citty, in the month of June, 1676, voyd, null and repealed” (1677) Defining the Franchise (1684) “An act for prevention of undue election of Burgeses” (1699) “An act for regulating the Elections of Burgesses; for settling their Privileges; and for ascertaining their allowances” (1705) “Act directing the trial of Slaves, committing capital crimes; and for the more effectual punishing conspiracies and insurrections of them; and for the better government of Negros, Mulattos, and Indians, bond or free” (1723) Denying Free Blacks the Right to Vote (1724, 1735) “An Act to declare who shall have a right to vote in the Election of Burgesses to serve in the General Assembly, for Counties; and for preventing fraudulent Conveiances, in order to multiply Votes at such Elections” (1736)