Skip to content
Author: General AssemblyTranscription Source: William Waller Hening, ed., The Statutes at Large; Being a Collection of All the Laws of Virginia from the First Session of the Legislature in the Year 1619 (Philadelphia: Thomas Desilver, 1823), 3:172–175.
FULL TEXT
— page 172 — 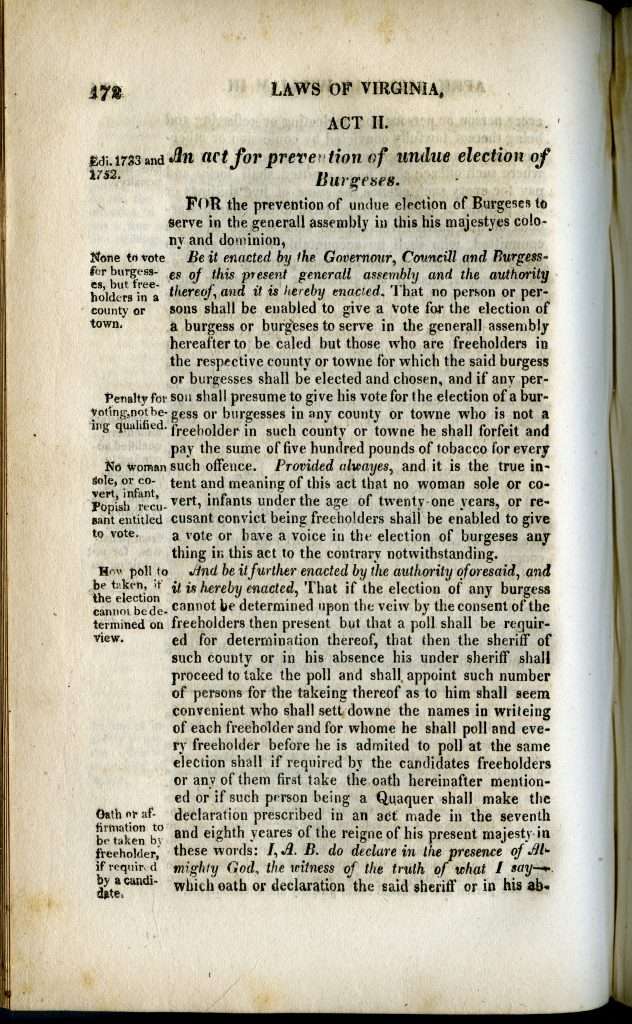 FOR the prevention of undue election of Burgeses to serve in the generall assembly in this his majestyes colony and dominion,

Be it enacted by the Governour, Councill and Burgesses of this present generall assembly and the authority thereof, and it is hereby enacted. That no person or persons shall be enabled to give a vote for the election of a burgeses or burgeses to serve in the generall assembly hereafter to be caled but those who are freeholders in the respective county or towne for which the said burgess or burgesses shall be elected and chosen, and if any person shall presume to give his vote for the election of a burgess or burgesses in any county or towne who is not a freeholder in such county or towne he shall forfeit and pay the sume of five hundred pounds of tobacco for every such offence. Provided alwayes, and it is the true intent and meaning of this act that no woman sole or covert, infants under the age of twenty one years, or recusant convict being freeholders shall be enabled to give a vote or have a voice in the election of burgeses any thing in this act to the contrary notwithstanding.

And be it further enacted by the authority oforesaid, and it is hereby enacted, That if the election of any burgess cannot be determined upon the veiw by the consent of the freeholders then present but that a poll shall be required for determination thereof, that then the sheriff of such county or in his absence his under sheriff shall proceed to take the poll and shall appoint such number of persons for the takeing thereof as to him shall seem convenient who shall sett downe the names in writeing of each freeholder and for whome he shall poll and every freeholder before he is admited to poll at the same election shall if required by the candidates freeholders or any of them first take the oath hereinafter mentioned or if such person being a Quaquer shall make the declaration prescribed in an act made in the seventh and eighth yeares of the reigne of his present majesty in these words: I, A. B. do declare in the presence of Almighty God, the witness of the truth of what I say −− which oath or declaration the said sheriff or in his ab- 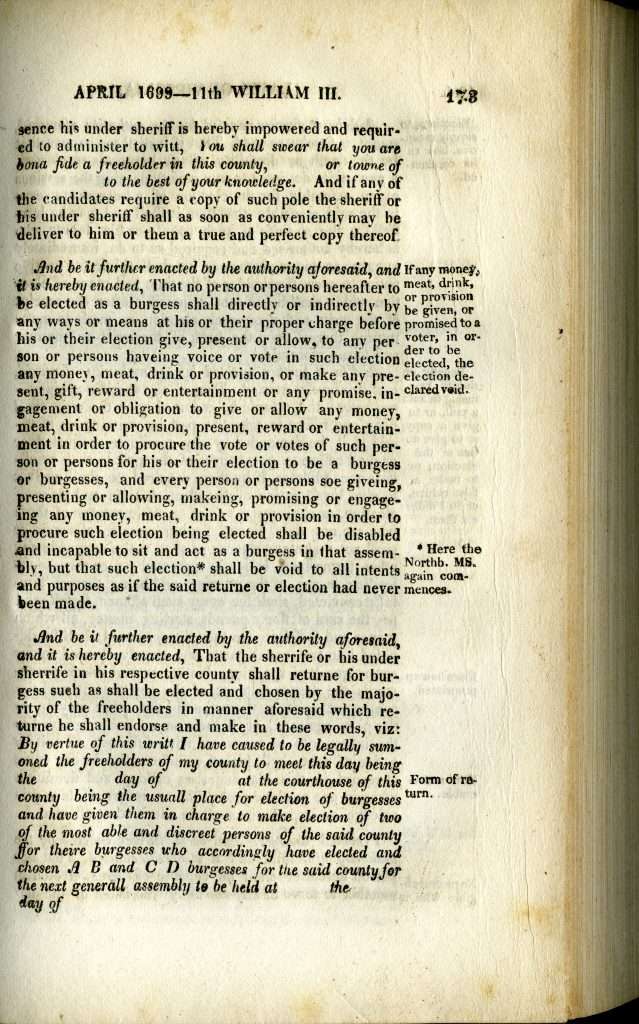 sence his under sheriff is hereby impowered and required to administer to witt, You shall swear that you are bona fide a freeholder in this county,             or towne of                         to the best of your knowledge. And if any of the candidates require a copy of such pole the sheriff or his under sheriff shall as soon as conveniently may be deliver to him or them a true and perfect copy thereof.

And be it further enacted by the authority aforesaid, and it is hereby enacted, That no person or persons hereafter to be elected as a burgess shall directly or indirectly by any ways or means at his or their proper charge before his or their election give, present or allow, to any person or persons haveing voice or vote in such election any money, meat, drink or provision, or make any present, gift, reward or entertainment or any promise, ingagement or obligation to give or allow any money, meat, drink or provision, present, reward or entertainment in order to procure the vote or votes of such person or persons for his or their election to be a burgess or burgesses, and every person or persons soe giveing, presenting or allowing, makeing, promising or engageing any money, meat, drink or provision in order to procure such election being elected shall be disabled and incapable to sit and act as a burgess in that assembly, but that such election* shall be void to all intents and purposes as if the said returne or election had never been made.

And be it further enacted by the authority aforesaid, and it is hereby enacted, That the sherrife or his under sherrife in his respective county shall returne for burgess such as shall be elected and chosen by the majority of the freeholders in manner aforesaid which returne he shall endorse and make in these words, viz: By vertue of this writt I have caused to be legally sumoned the freeholders of my county to meet this day being the                   day of                   at the courthouse of this county being the usuall place for election of burgesses and have given them in charge to make election of two of the most able and discreet persons of the said county ffor theire burgesses who accordingly have elected and chosen A B and C D burgesses for the said county for the next generall assembly to be held at             the             day of 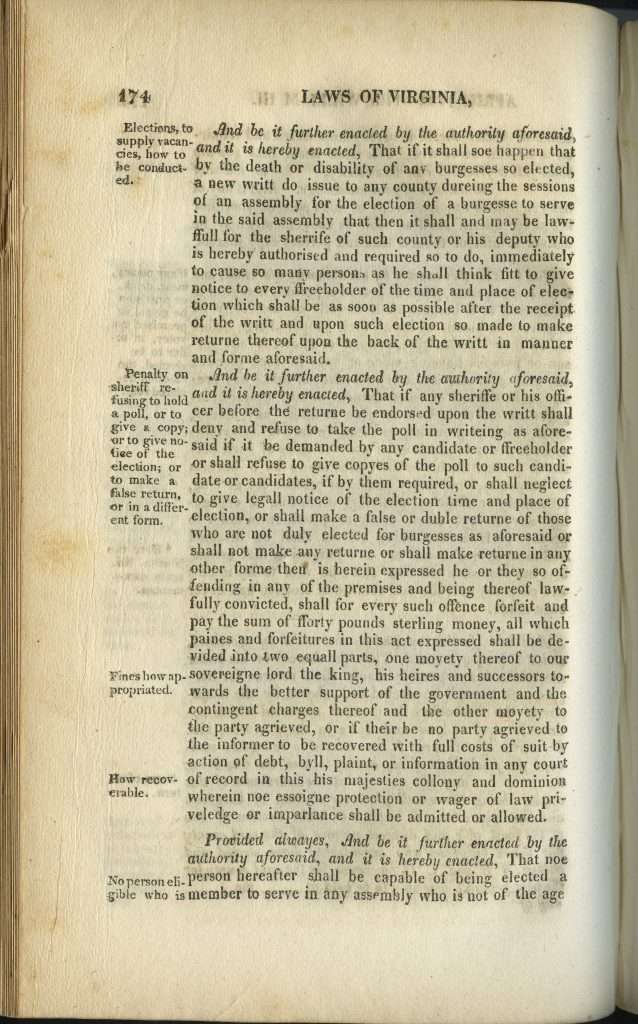 And be it further enacted by the authority aforesaid, and it is hereby enacted, That if it shall soe happen that by the death or disability of any burgesses so elected, a new writt do issue to any county dureing the sessions of an assembly for the election of a burgesse to serve in the said assembly that then it shall and may be lawffull for the sherrife of such county or his deputy who is hereby authorised and required so to do, immediately to cause so many persons as he shall think fitt to give notice to every ffreeholder of the time and place of election which shall be as soon as possible after the receipt of the writt and upon such election so made to make returne thereof upon the back of the writt in manner and forme aforesaid.

And be it further enacted by the authority aforesaid, and it is hereby enacted, That if any sheriffe or his officer before the returne be endorsed upon the writt shall deny and refuse to take the poll in writeing as aforesaid if it be demanded by any candidate or ffreeholder or shall refuse to give copyes of the poll to such candidate or candidates, if by them required, or shall neglect to give legall notice of the election time and place of election, or shall make a false or duble returne of those who are not duly elected for burgesses as aforesaid or shall not make any returne or shall make returne in any other forme then is herein expressed he or they so offending in any of the premises and being thereof lawfully convicted, shall for every such offence forfeit and pay the sum of fforty pounds sterling money, all which paines and forfeitures in this act expressed shall be devided into two equall parts, one moyety thereof to our sovereigne lord the king, his heires and successors towards the better support of the government and the contingent charges thereof and the other moyety to the party agrieved, or if their be no party agrieved to the informer to be recovered with full costs of suit by action of debt, byll, plaint, or information in any court of record in this his majesties collony and dominion wherein noe essoigne protection or wager of law priveledge or imparlance shall be admitted or allowed.

Provided alwayes, And be it further enacted by the authority aforesaid, and it is hereby enacted, That noe person hereafter shall be capable of being elected a member to serve in any assembly who is not of the age 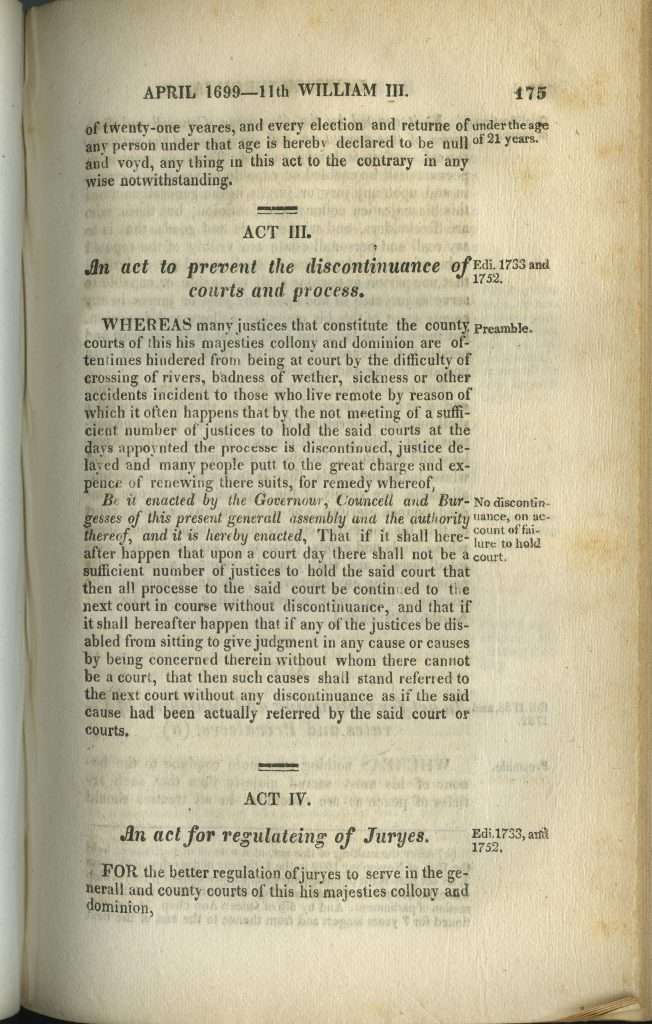 of twenty-one yeares, and every election and returne of any person under that age is hereby declared to be null and voyd, any thing in this act to the contrary in any wise notwithstanding.

RELATED CONTENT
Categories:
Type:
MAP
TIMELINE
April 1699
The General Assembly passes a law, titled "An act for prevention of undue election of Burgeses," extending the franchise to Quakers but denying it to women and those under the age of 21.
FURTHER READING

Defining the Franchise (1646) Defining the Franchise (1655) Defining the Franchise (1656) “Election of burgesses by whome” (1670) “An act enabling freemen to vote for burgesses and preventing false returnes of burgesses” (1676) “An act declaring all the acts, orders and proceedings of a grand assembly held att James Citty, in the month of June, 1676, voyd, null and repealed” (1677) Defining the Franchise (1684) “An act for regulating the Elections of Burgesses; for settling their Privileges; and for ascertaining their allowances” (1705) “Act directing the trial of Slaves, committing capital crimes; and for the more effectual punishing conspiracies and insurrections of them; and for the better government of Negros, Mulattos, and Indians, bond or free” (1723) Denying Free Blacks the Right to Vote (1724, 1735) “An Act to declare who shall have a right to vote in the Election of Burgesses to serve in the General Assembly, for Counties; and for preventing fraudulent Conveiances, in order to multiply Votes at such Elections” (1736)