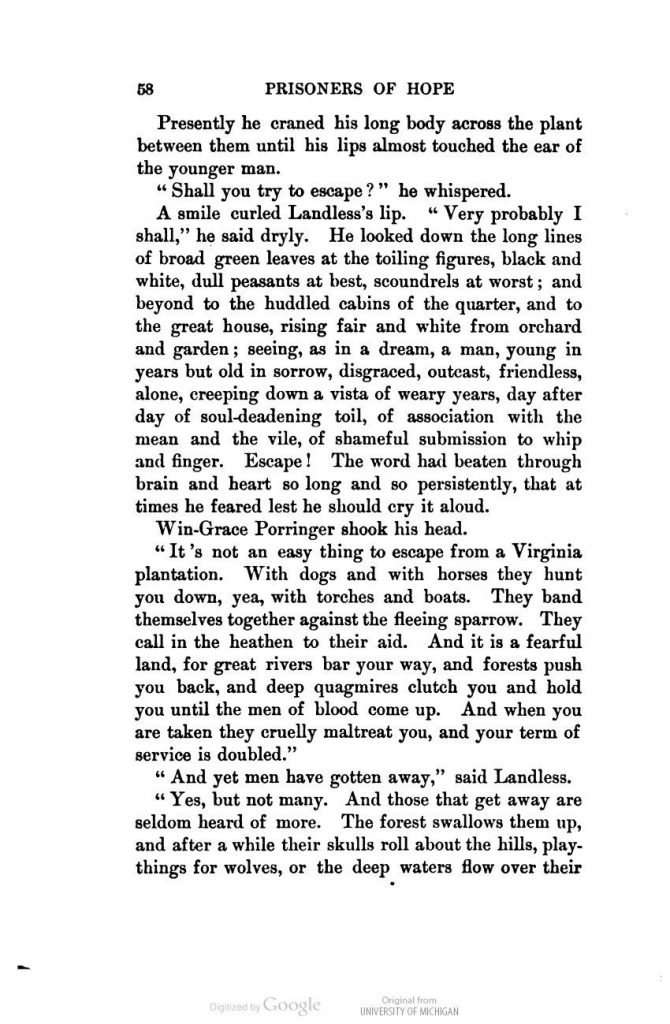 “Shall you try to escape?” he whispered.

A smile curled Landless’s lip. “Very probably I shall,” he said dryly. He looked down the long lines of broad green leaves at the toiling figures, black and white, dull peasants at best, scoundrels at worst; and beyond to the huddled cabins of the quarter, and to the great house, rising fair and white from orchard and garden; seeing, as in a dream, a man, young in years but old in sorrow, disgraced, outcast, friendless, alone, creeping down a vista of weary years, day after day of soul-deadening toil, of association with the mean and the vile, of shameful submission to whip and finger. Escape! The word had beaten through brain and heart so long and so persistently, that at times he feared lest he should cry it aloud.

“It’s not an easy thing to escape from a Virginia plantation. With dogs and with horses they hunt you down, yea, with torches and boats. They band themselves together against the fleeing sparrow. They call in the heathen to their aid. And it is a fearful land, for great rivers bar your way, and forests push you back, and deep quagmires clutch you and hold you until the men of blood come up. And when you are taken they cruelly maltreat you, and your term of service is doubled.”

“And yet men have gotten away,” said Landless.

“Yes, but not many. And those that get away are seldom heard of more. The forest swallows them up, and after a while their skulls roll about the hills, playthings for wolves, or the deep waters flow over their 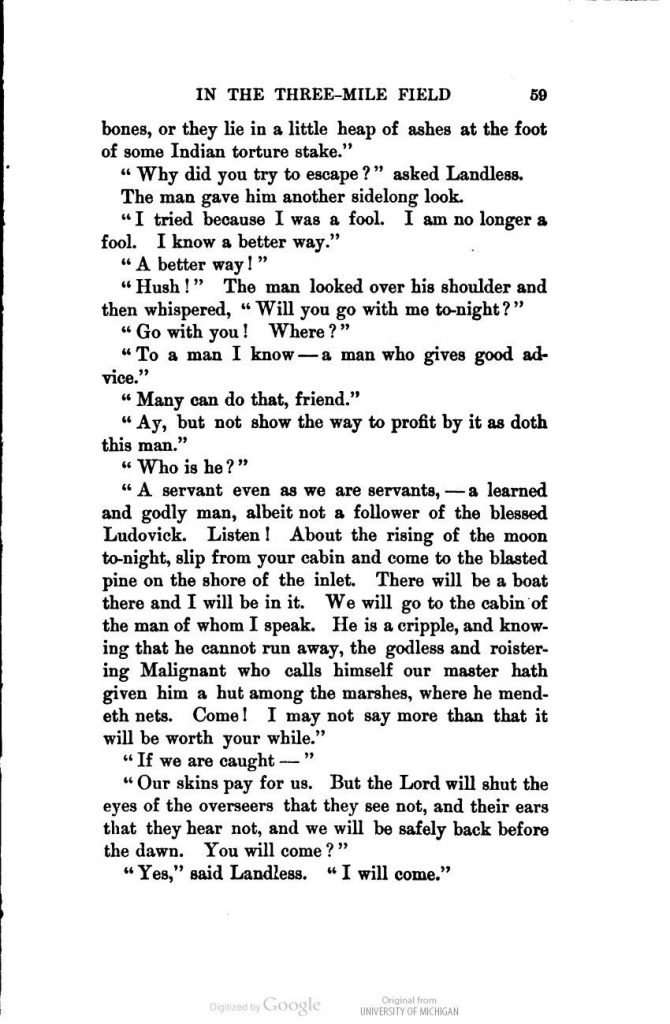 bones, or they lie in a little heap of ashes at the foot of some Indian torture stake.”

“Why did you try to escape?” asked Landless.

The man gave him another sidelong look.

“I tried because I was a fool. I am no longer a fool. I know a better way.”

“Hush!” The man looked over his shoulder and then whispered, “Will you go with me to-night?”

“To a man I know—a man who gives good advice.”

“Many can do that, friend.”

“Ay, but not show the way to profit by it as doth this man.”

“A servant even as we are servants,—a learned and godly man, albeit not a follower of the blessed Ludovick. Listen! About the rising of the moon to-night, slip from your cabin and come to the blasted pine on the shore of the inlet. There will be a boat there and I will be in it. We will go to the cabin of the man of whom I speak. He is a cripple, and knowing that he cannot run away, the godless and roistering Malignant who calls himself our master hath given him a hut among the marshes, where he mendeth nets. Come! I may not say more than that it will be worth your while.”

“Our skins pay for us. But the Lord will shut the eyes of the overseers that they see not, and their ears that they hear not, and we will be safely back before the dawn. You will come?”