Skip to content
Author: Sir William BerkeleyTranscription Source: William Waller Hening, ed., The Statutes at Large; Being a Collection of All the Laws of Virginia from the First Session of the Legislature in the Year 1619 (New York: R. & W. & G. Bartow, 1823), 2:204.
FULL TEXT 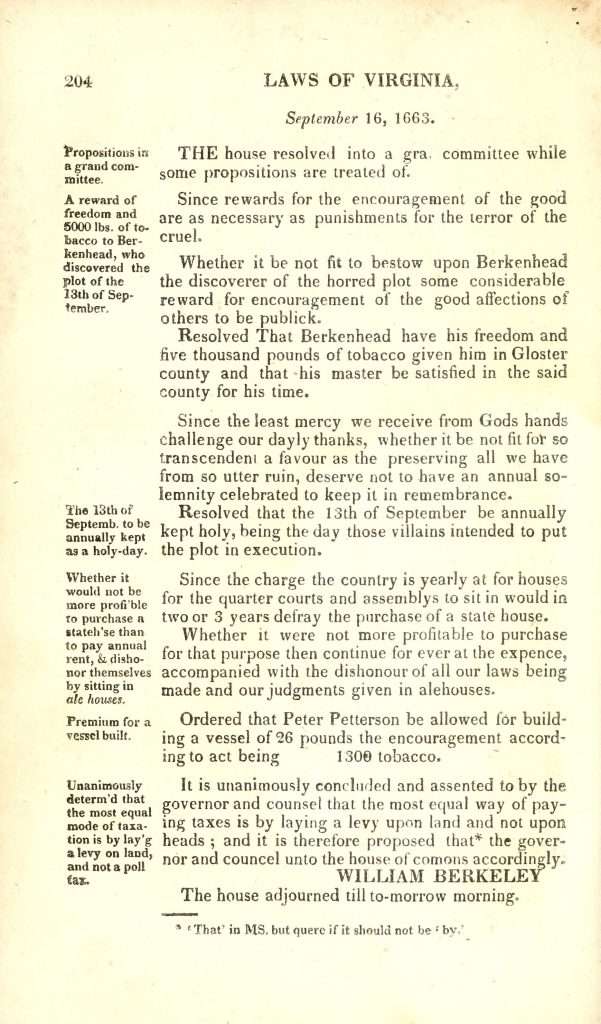 THE house resolved into a gra. Committee while some propositions are treated of.

Since rewards for the encouragement of the good are as necessary as punishments for the terror of the cruel.

Whether it be not fit to bestow upon Berkenhead the discoverer of the horred plot some considerable reward for encouragement of the good affections of others to be publick.

Resolved That Berkenhead have his freedom and five thousand pounds of tobacco given him in Gloster county and that his master be satisfied in the said county for his time.

Since the least mercy we receive from Gods hands challenge our dayly thanks, whether it be not fit for so transcendent a favour as the preserving all we have from so utter ruin, deserve not to have an annual solemnity celebrated to keep it in remembrance.

Resolved that the 13th of September be annually kept holy, being the day those villains intended to put the plot in execution.

Since the charge the country is yearly at for houses for the quarter courts and assemblys to sit in would in two or 3 years defray the purchase of a state house.

Whether it were not more profitable to purchase for that purpose then continue for ever at the expence, accompanied with the dishonour of all our laws being made and our judgments given in alehouses.

Ordered that Peter Petterson be allowed for building a vessel of 26 pounds the encouragement according to act being 1300 tobacco.

The house adjourned till to-morrow morning.

RELATED CONTENT
Categories:
Type:
MAP
TIMELINE
September 16, 1663
William Berkeley and the House of Burgesses agree to reward the servant Birkenhead his freedom and five thousand pounds of tobacco for revealing a plan to rebel by servants in Gloucester County.
FURTHER READING