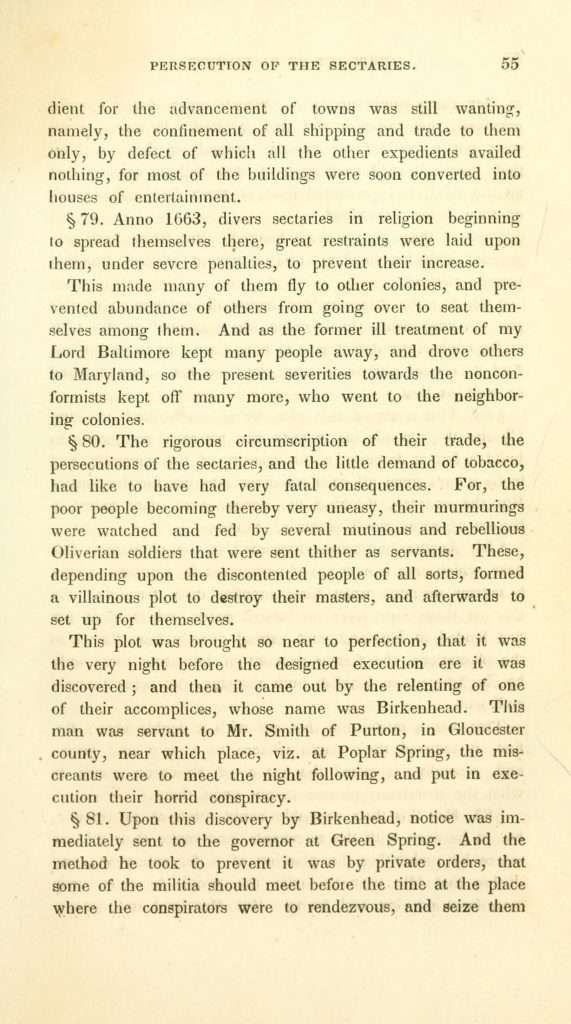 Anno 1663, divers sectaries in religion beginning to spread themselves there, great restraints were laid upon them, under severe penalties, to prevent their increase.

This made many of them fly to other colonies, and prevented abundance of others from going over to seat themselves among them. And as the former ill treatment of my Lord Baltimore kept many people away, and drove others to Maryland, so the present severities towards the nonconformists kept off many more, who went to the neighboring colonies.

The rigorous circumscription of their trade, the persecutions of the sectaries, and the little demand of tobacco, had like to have had very fatal consequences. For, the poor people becoming thereby very uneasy, their murmurings were watched and fed by several mutinous and rebellious Oliverian soldiers that were sent thither as servants. These, depending upon the discontented people of all sorts, formed a villainous plot to destroy their masters, and afterwards to set up for themselves.

This plot was brought so near to perfection, that it was the very night before the designed execution ere it was discovered; and then it came out by the relenting of one of their accomplices, whose name was Birkenhead. This man was servant to Mr. Smith of Purton, in Gloucester county, near which place, viz. at Poplar Spring, the miscreants were to meet the night following, and put in execution their horrid conspiracy.

Upon this discovery by Birkenhead, notice was immediately sent to the governor at Green Spring. And the method he took to prevent it was by private orders, that some of the militia should meet before the time at the place where the conspirators were to rendezvous, and seize them 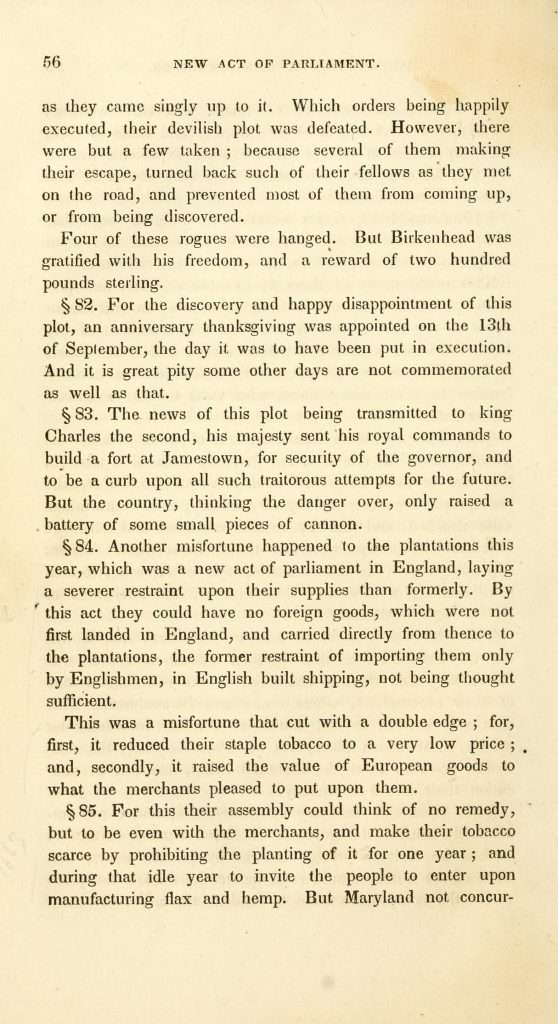 as they came singly up to it. Which orders being happily executed, their devilish plot was defeated. However, there were but a few taken; because several of them making their escape, turned back such of their fellows as they met on the road, and prevented most of them from coming up, or from being discovered.

Four of these rogues were hanged. But Birkenhead was gratified with his freedom, and a reward of two hundred pounds sterling.

For the discovery and happy disappointment of this plot, an anniversary thanksgiving was appointed on the 13th of September, the day it was to have been put in execution. And it is great pity some other days are not commemorated as well as that.

The news of this plot being transmitted to king Charles the second, his majesty sent his royal commands to build a fort at Jamestown, for security of the governor, and to be a curb upon all such traitorous attempts for the future. But the country, thinking the danger over, only raised a battery of some small pieces of cannon.

RELATED CONTENT
Categories:
Type:
MAP
TIMELINE
1705
While in England, Robert Beverley Jr. writes The History and Present State of Virginia, the first published history of a British colony by a native of North America. After its publication, he returns to Virginia.
FURTHER READING