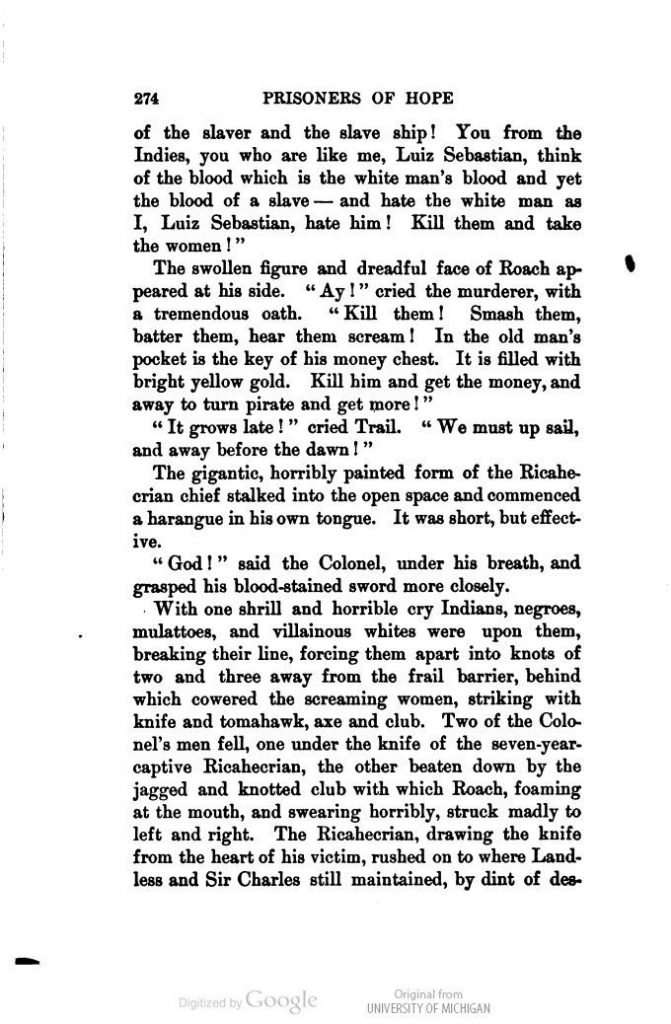 With one shrill and horrible cry Indians, negroes, mulattoes, and villainous whites were upon them, breaking their line, forcing them apart into knots of two and three away from the frail barrier, behind which cowered the screaming women, striking with knife and tomahawk, axe and club. Two of the Colonel’s men fell, one under the knife of the seven-year-captive Ricahecrian, the other beaten down by the jagged and knotted club with which Roach, foaming at the mouth, and swearing horribly, struck madly to left and right. The Ricahecrian, drawing the knife from the heart of his victim, rushed on to where Landless and Sir Charles still maintained, by dint of des- 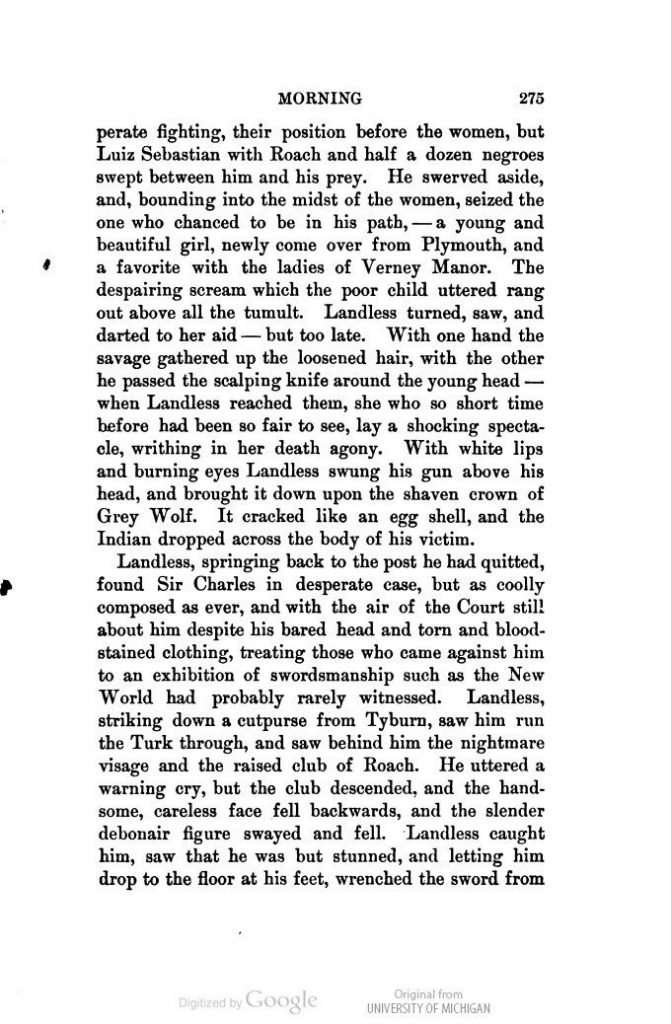 perate fighting, their position before the women, but Luiz Sebastian with Roach and half a dozen negroes swept between him and his prey. He swerved aside, and, bounding into the midst of the women, seized the one who chanced to be in his path,—a young and beautiful girl, newly come over from Plymouth, and a favorite with the ladies of Verney Manor. The despairing scream which the poor child uttered rang out above all the tumult. Landless turned, saw, and darted to her aid—but too late. With one hand the savage gathered up the loosened hair, with the other he passed the scalping knife around the young head—when Landless reached them, she who so short time before had been so fair to see, lay a shocking spectacle, writhing in her death agony. With white lips and burning eyes Landless swung his gun above his head, and brought it down upon the shaven crown of Grey Wolf. It cracked like an egg shell, and the Indian dropped across the body of his victim.

Landless, springing back to the post he had quitted, found Sir Charles in desperate case, but as coolly composed as ever, and with the air of the Court still about him despite his bared head and torn and bloodstained clothing, treating those who came against him to an exhibition of swordsmanship such as the New World had probably rarely witnessed. Landless, striking down a cutpurse from Tyburn, saw him run the Turk through, and saw behind him the nightmare visage and the raised club of Roach. He uttered a warning cry, but the club descended, and the handsome, careless face fell backwards, and the slender debonair figure swayed and fell. Landless caught him, saw that he was but stunned, and letting him drop to the floor at his feet, wrenched the sword from 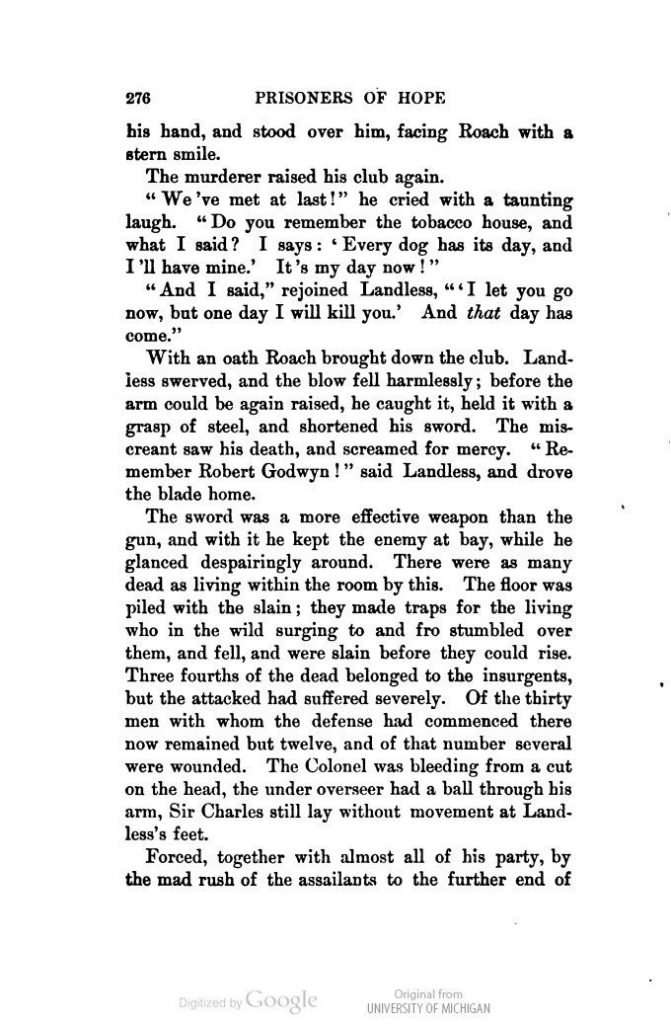 his hand, and stood over him, facing Roach with a stern smile.

The murderer raised his club again.

“We’ve met at last!” he cried with a taunting laugh. “Do you remember the tobacco house, and what I said? I says: ‘Every dog has its day, and I’ll have mine.’ It’s my day now!”

With an oath Roach brought down the club. Landless swerved, and the blow fell harmlessly; before the arm could be again raised, he caught it, held it with a grasp of steel, and shortened his sword. The miscreant saw his death, and screamed for mercy. “Remember Robert Godwyn!” said Landless, and drove the blade home.

The sword was a more effective weapon than the gun, and with it he kept the enemy at bay, while he glanced despairingly around. There were as many dead as living within the room by this. The floor was piled with the slain; they made traps for the living who in the wild surging to and fro stumbled over them, and fell, and were slain before they could rise. Three fourths of the dead belonged to the insurgents, but the attacked had suffered severely. Of the thirty men with whom the defense had commenced there now remained but twelve, and of that number several were wounded. The Colonel was bleeding from a cut on the head, the under overseer had a ball through his arm, Sir Charles still lay without movement at Landless’s feet.

Forced, together with almost all of his party, by the mad rush of the assailants to the further end of 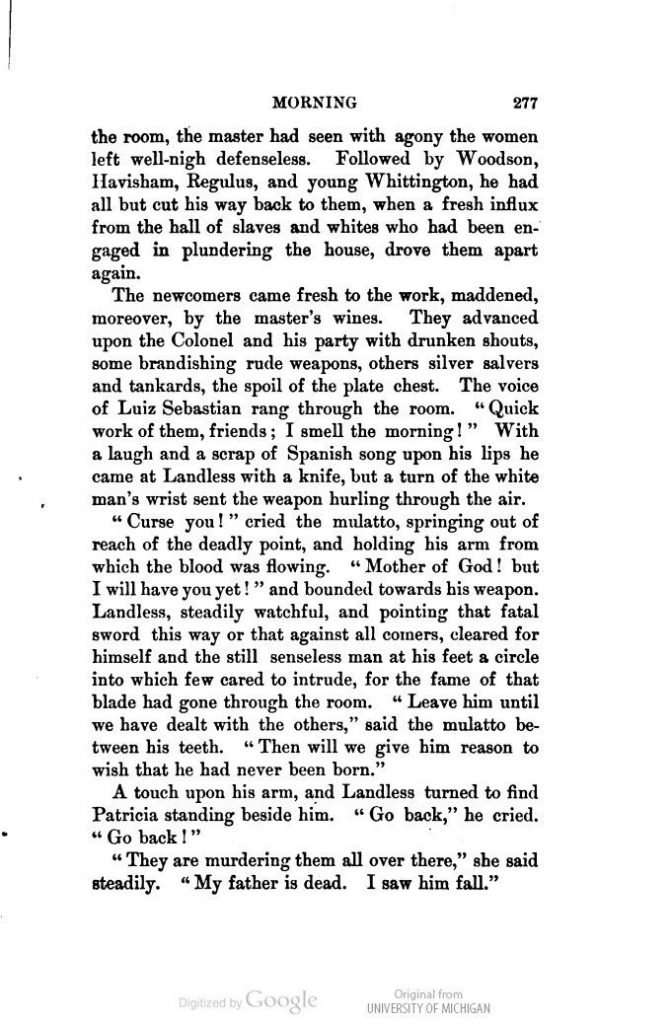 the room, the master had seen with agony the women left well-nigh defenseless. Followed by Woodson, Havisham, Regulus, and young Whittington, he had all but cut his way back to them, when a fresh influx from the hall of slaves and whites who had been engaged in plundering the house, drove them apart again.

The newcomers came fresh to the work, maddened, moreover, by the master’s wines. They advanced upon the Colonel and his party with drunken shouts, some brandishing rude weapons, others silver salvers and tankards, the spoil of the plate chest. The voice of Luiz Sebastian rang through the room. “Quick work of them, friends; I smell the morning!” With a laugh and a scrap of Spanish song upon his lips he came at Landless with a knife, but a turn of the white man’s wrist sent the weapon hurling through the air.

“Curse you!” cried the mulatto, springing out of reach of the deadly point, and holding his arm from which the blood was flowing. “Mother of God! but I will have you yet!” and bounded towards his weapon. Landless, steadily watchful, and pointing that fatal sword this way or that against all comers, cleared for himself and the still senseless man at his feet a circle into which few cared to intrude, for the fame of that blade had gone through the room. “Leave him until we have dealt with the others,” said the mulatto between his teeth. “Then will we give him reason to wish that he had never been born.”

A touch upon his arm, and Landless turned to find Patricia standing beside him. “Go back,” he cried. “Go back!”

“They are murdering them all over there,” she said steadily. “My father is dead. I saw him fall.” 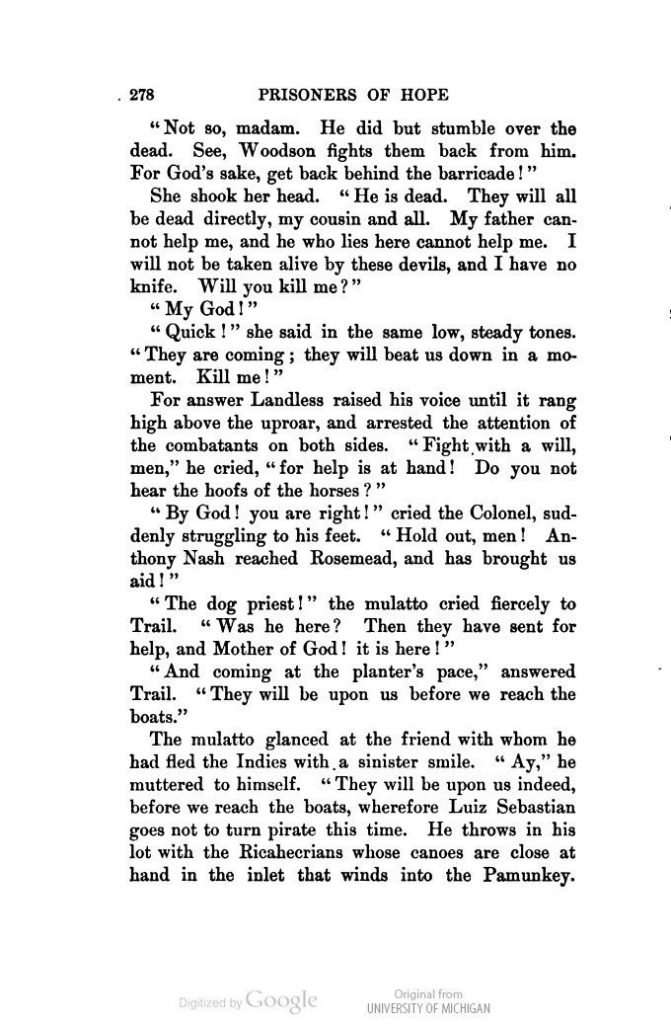 “Not so, madam. He did but stumble over the dead. See, Woodson fights them back from him. For God’s sake, get back behind the barricade!”

She shook her head. “He is dead. They will all be dead directly, my cousin and all. My father cannot help me, and he who lies here cannot help me. I will not be taken alive by these devils, and I have no knife. Will you kill me?”

“Quick!” she said in the same low, steady tones. “They are coming; they will beat us down in a moment. Kill me!”