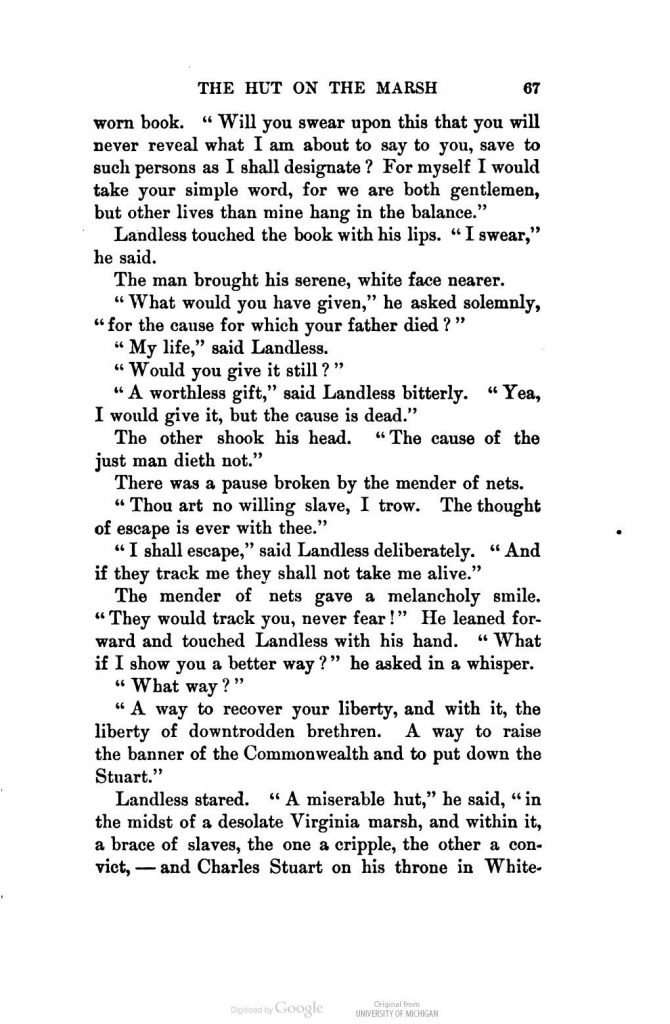 “I shall escape,” said Landless deliberately. “And if they track me they shall not take me alive.”

The mender of nets gave a melancholy smile. “They would track you, never fear!” He leaned forward and touched Landless with his hand. “What if I show you a better way?” he asked in a whisper.

“A way to recover your liberty, and with it, the liberty of downtrodden brethren. A way to raise the banner of the Commonwealth and to put down the Stuart.”

Landless stared. “A miserable hut,” he said, “in the midst of a desolate Virginia marsh, and within it, a brace of slaves, the one a cripple, the other a convict,—and Charles Stuart on his throne in White- 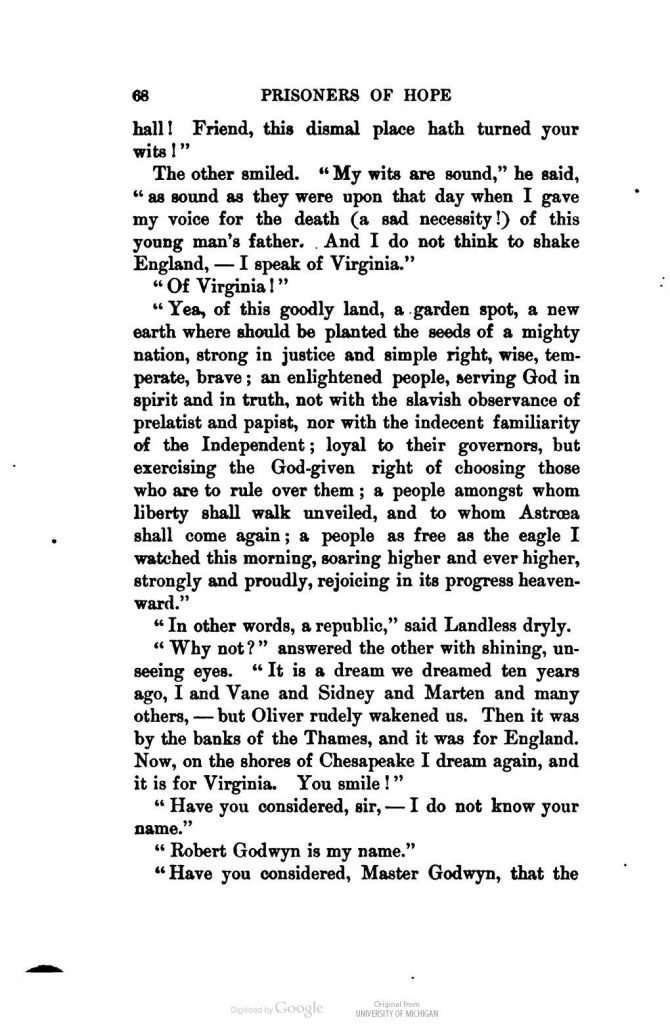 The other smiled. “My wits are sound,” he said, “as sound as they were upon that day when I gave my voice for the death (a sad necessity!) of this young man’s father. And I do not think to shake England,—I speak of Virginia.”

“Yea, of this goodly land, a garden spot, a new earth where should be planted the seeds of a mighty nation, strong in justice and simple right, wise, temperate, brave; an enlightened people, serving God in spirit and in truth, not with the slavish observance of prelatist and papist, nor with the indecent familiarity of the Independent; loyal to their governors, but exercising the God-given right of choosing those who are to rule over them; a people amongst whom liberty shall walk unveiled, and to whom Astrœa shall come again; a people as free as the eagle I watched this morning, soaring higher and ever higher, strongly and proudly, rejoicing in its progress heavenward.”

“In other words, a republic,” said Landless dryly.

“Why not?” answered the other with shining, unseeing eyes. “It is a dream we dreamed ten years ago, I and Vane and Sidney and Marten and many others,—but Oliver rudely wakened us. Then it was by the banks of the Thames, and it was for England. Now, on the shores of Chesapeake I dream again, and it is for Virginia. You smile!”

“Have you considered, sir,—I do not know your name.”

“Robert Godwyn is my name.”

“Have you considered, Master Godwyn, that the 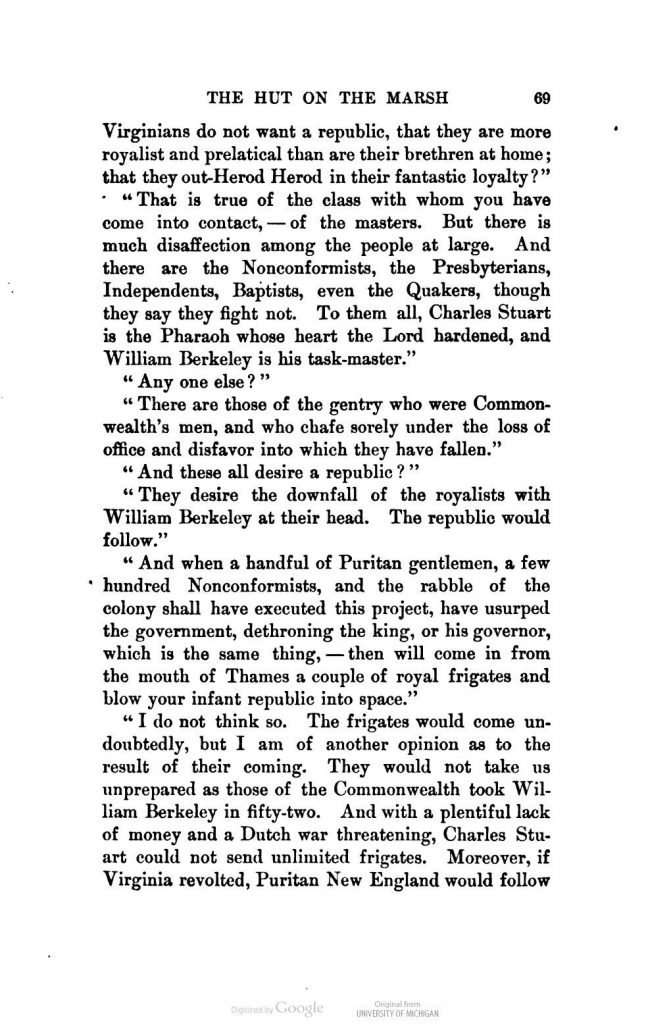 Virginians do not want a republic, that they are more royalist and prelatical than are their brethren at home; that they out-Herod Herod in their fantastic loyalty?”

“That is true of the class with whom you have come into contact,—of the masters. But there is much disaffection among the people at large. And there are the Nonconformists, the Presbyterians, Independents, Baptists, even the Quakers, though they say they fight not. To them all, Charles Stuart is the Pharaoh whose heart the Lord hardened, and William Berkeley is his task-master.”

“There are those of the gentry who were Commonwealth’s men, and who chafe sorely under the loss of office and disfavor into which they have fallen.”

“And these all desire a republic?”

“They desire the downfall of the royalists with William Berkeley at their head. The republic would follow.”

“And when a handful of Puritan gentlemen, a few hundred Nonconformists, and the rabble of the colony shall have executed this project, have usurped the government, dethroning the king, or his governor, which is the same thing,—then will come in from the mouth of Thames a couple of royal frigates and blow your infant republic into space.”

“I do not think so. The frigates would come undoubtedly, but I am of another opinion as to the result of their coming. They would not take us unprepared as those of the Commonwealth took William Berkeley in fifty-two. And with a plentiful lack of money and a Dutch war threatening, Charles Stuart could not send unlimited frigates. Moreover, if Virginia revolted, Puritan New England would follow 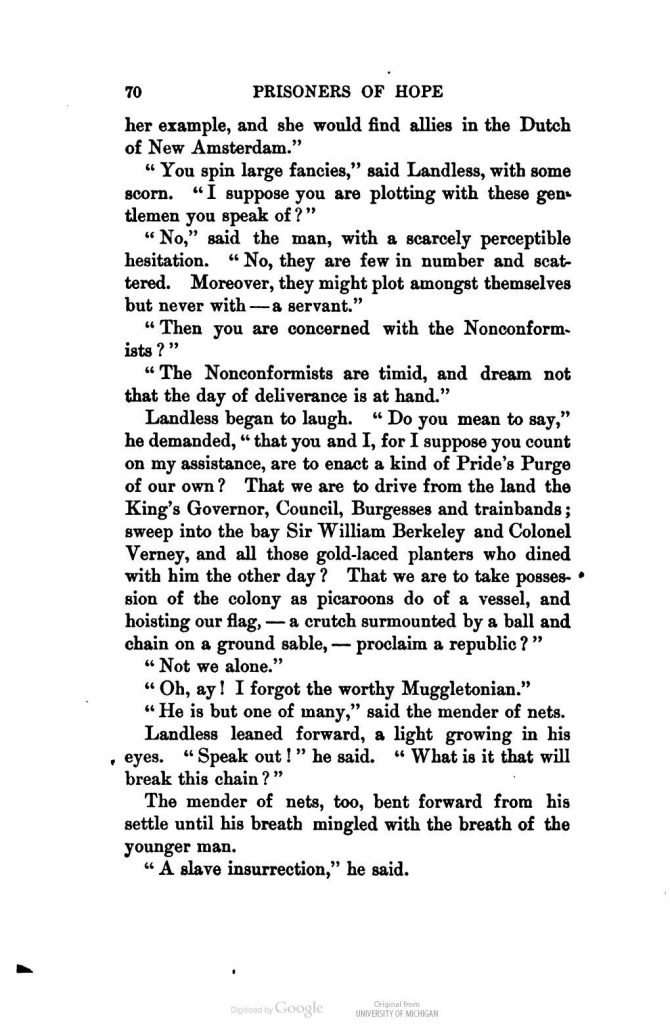 her example, and she would find allies in the Dutch of New Amsterdam.”

“You spin large fancies,” said Landless, with some scorn. “I suppose you are plotting with these gentlemen you speak of?”

“No,” said the man, with a scarcely perceptible hesitation. “No, they are few in number and scattered. Moreover, they might plot amongst themselves but never with—a servant.”

“Then you are concerned with the Nonconformists?”

“The Nonconformists are timid, and dream not that the day of deliverance is at hand.”

Landless began to laugh. “Do you mean to say,” he demanded, “that you and I, for I suppose you count on my assistance, are to enact a kind of Pride’s Purge of our own? That we are to drive from the land the King’s Governor, Council, Burgesses and trainbands; sweep into the bay Sir William Berkeley and Colonel Verney, and all those gold-laced planters who dined with him the other day? That we are to take possession of the colony as picaroons do of a vessel, and hoisting our flag,—a crutch surmounted by a ball and chain on a ground sable,—proclaim a republic?”

“He is but one of many,” said the mender of nets.

Landless leaned forward, a light growing in his eyes. “Speak out!” he said. “What is it that will break this chain?”

The mender of nets, too, bent forward from his settle until his breath mingled with the breath of the younger man.

“A slave insurrection,” he said.