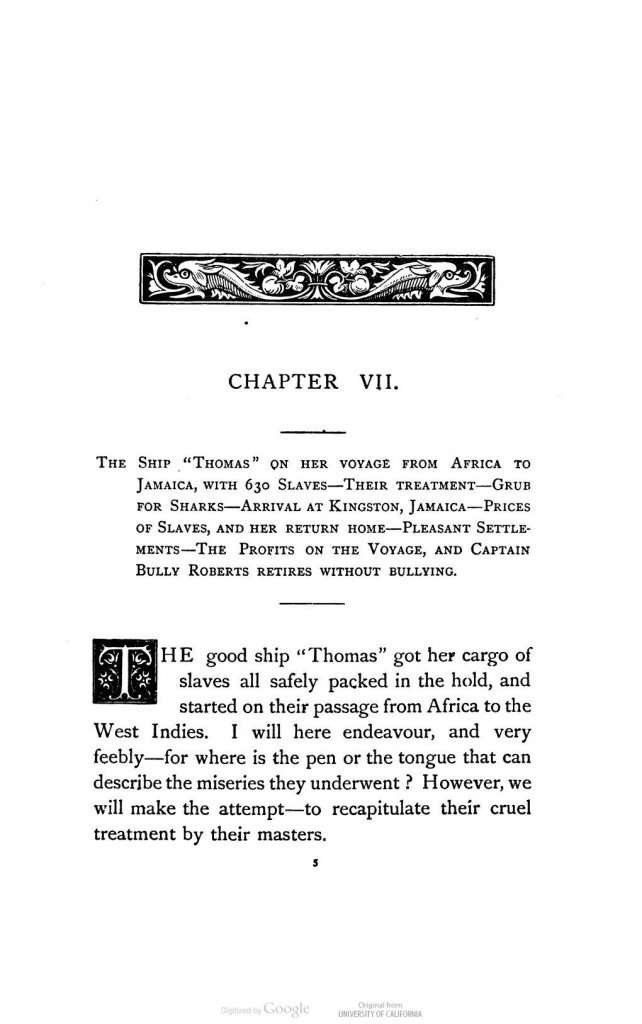 The Ship “Thomas” on Her Voyage from Africa to Jamaica, with 630 Slaves—Their Treatment—Grub for Sharks—Arrival at Kingston, Jamaica—Prices of Slaves, and Her Return Home—Pleasant Settlements—The Profits of the Voyage, and Captain Bully Roberts Retires without Bullying.

The good ship “Thomas” got her cargo of slaves all safely packed in the hold, and started on their passage from Africa to the West Indies. I will here endeavour, and very feebly—for where is the pen or the tongue that can describe the miseries they underwent? However, we will make the attempt—to recapitulate their cruel treatment by their masters. 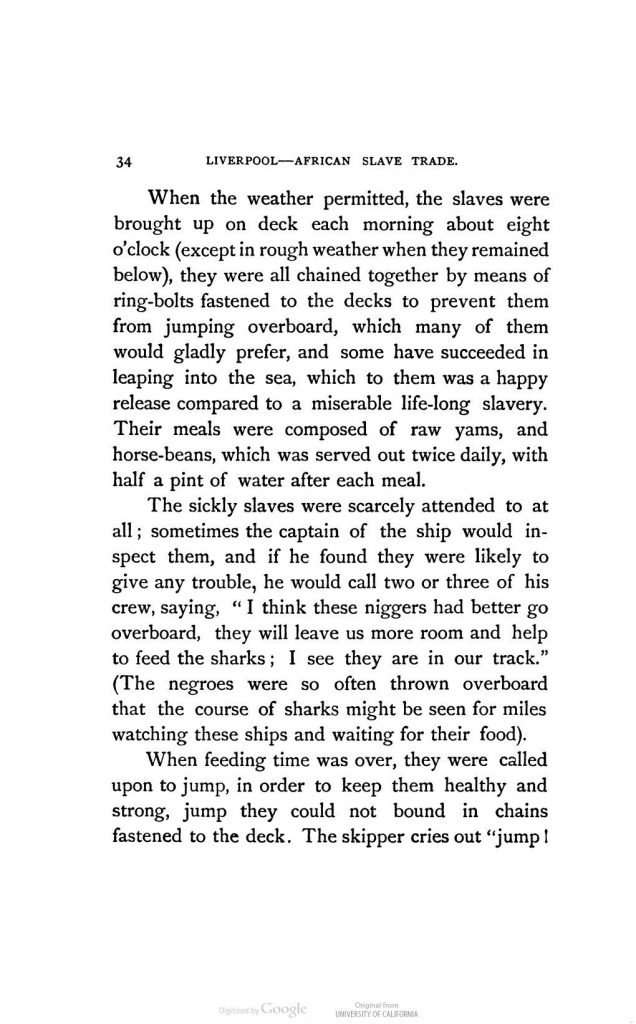 When the weather permitted, the slaves were brought up on deck each morning about eight o’clock (except in rough weather when they remained below), they were all chained together by means of ring-bolts fastened to the decks to prevent them from jumping overboard, which many of them would gladly prefer, and some have succeeded in leaping into the sea, which to them was a happy release compared to a miserable life-long slavery. Their meals were composed of raw yams, and horse-beans, which was served out twice daily, with half a pint of water after each meal.

The sickly slaves were scarcely attended to at all; sometimes the captain of the ship would inspect them, and if he found they were likely to give any trouble, he would call two or three of his crew, saying, “I think these niggers had better go overboard, they will leave us more room and help to feed the sharks; I see they are in our track.” (The negroes were so often thrown overboard that the course of sharks might be seen for miles watching these ships and waiting for their food).

When feeding time was over, they were called upon to jump, in order to keep them healthy and strong, jump they could not bound in chains fastened to the deck. The skipper cries out “jump! 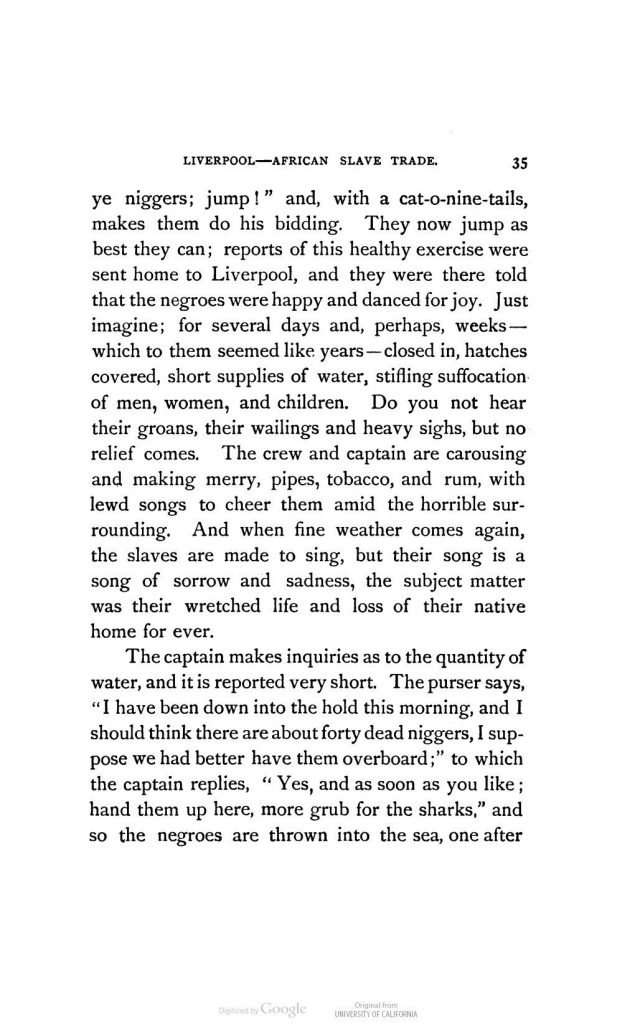 ye niggers; jump!” and, with a cat-o-nine-tails, makes them do his bidding. They now jump as best they can; reports of this healthy exercise were sent home to Liverpool, and they were there told that the negroes were happy and danced for joy. Just imagine; for several days and, perhaps, weeks—which to them seemed like years—closed in, hatches covered, short supplies of water, stifling suffocation of men, women, and children. Do you not hear their groans, their wailings and heavy sighs, but no relief comes. The crew and captain are carousing and making merry, pipes, tobacco, and rum, with lewd songs to cheer them amid the horrible surrounding. And when fine weather comes again, the slaves are made to sing, but their song is a song of sorrow and sadness, the subject matter was their wretched life and loss of their native home for ever.

The captain makes inquiries as to the quantity of water, and it is reported very short. The purser says, “I have been down into the hold this morning, and I should think there are about forty dead niggers, I suppose we had better have them overboard;” to which the captain replies, “Yes, and as soon as you like; hand them up here, more grub for the sharks,” and so the negroes are thrown into the sea, one after 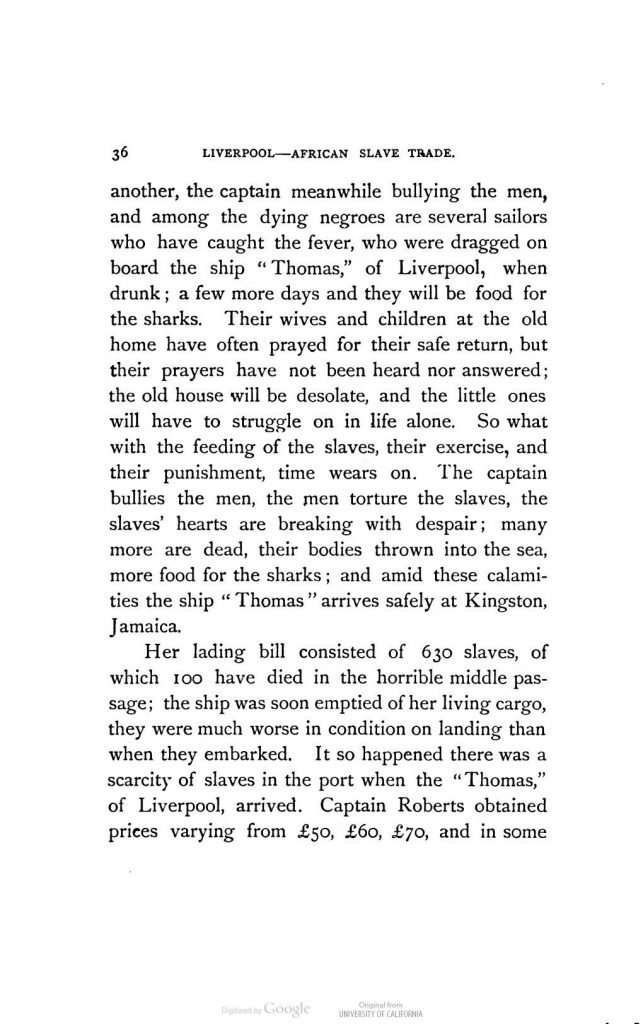 another, the captain meanwhile bullying the men, and among the dying negroes are several sailors who have caught the fever, who were dragged on board the ship “Thomas,” of Liverpool, when drunk; a few more days and they will be food for the sharks. Their wives and children at the old home have often prayed for their safe return, but their prayers have not been heard nor answered; the old house will be desolate, and the little ones will have to struggle on in life alone. So what with the feeding of the slaves, their exercise, and their punishment, time wears on. The captain bullies the men, the men torture the slaves, the slaves’ hearts are breaking with despair; many more are dead, their bodies thrown into the sea, more food for the sharks; and amid these calamities the ship “Thomas ” arrives safely at Kingston, Jamaica.

Her lading bill consisted of 630 slaves, of which 100 have died in the horrible middle passage; the ship was soon emptied of her living cargo, they were much worse in condition on landing than when they embarked. It so happened there was a scarcity of slaves in the port when the “Thomas,” of Liverpool, arrived. Captain Roberts obtained prices varying from £50, £60, £70, and in some 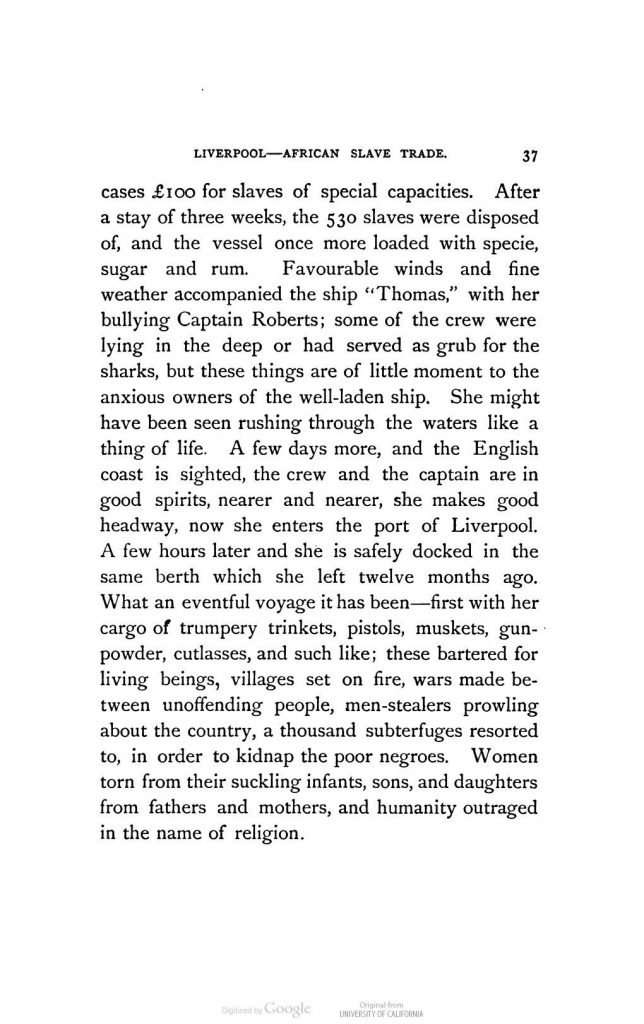 cases £100 for slaves of special capacities. After a stay of three weeks, the 530 slaves were disposed of, and the vessel once more loaded with specie, sugar and rum. Favourable winds and fine weather accompanied the ship “Thomas,” with her bullying Captain Roberts; some of the crew were lying in the deep or had served as grub for the sharks, but these things are of little moment to the anxious owners of the well-laden ship. She might have been seen rushing through the waters like a thing of life. A few days more, and the English coast is sighted, the crew and the captain are in good spirits, nearer and nearer, she makes good headway, now she enters the port of Liverpool. A few hours later and she is safely docked in the same berth which she left twelve months ago. What an eventful voyage it has been—first with her cargo of trumpery trinkets, pistols, muskets, gunpowder, cutlasses, and such like; these bartered for living beings, villages set on fire, wars made between unoffending people, men-stealers prowling about the country, a thousand subterfuges resorted to, in order to kidnap the poor negroes. Women torn from their suckling infants, sons, and daughters from fathers and mothers, and humanity outraged in the name of religion. 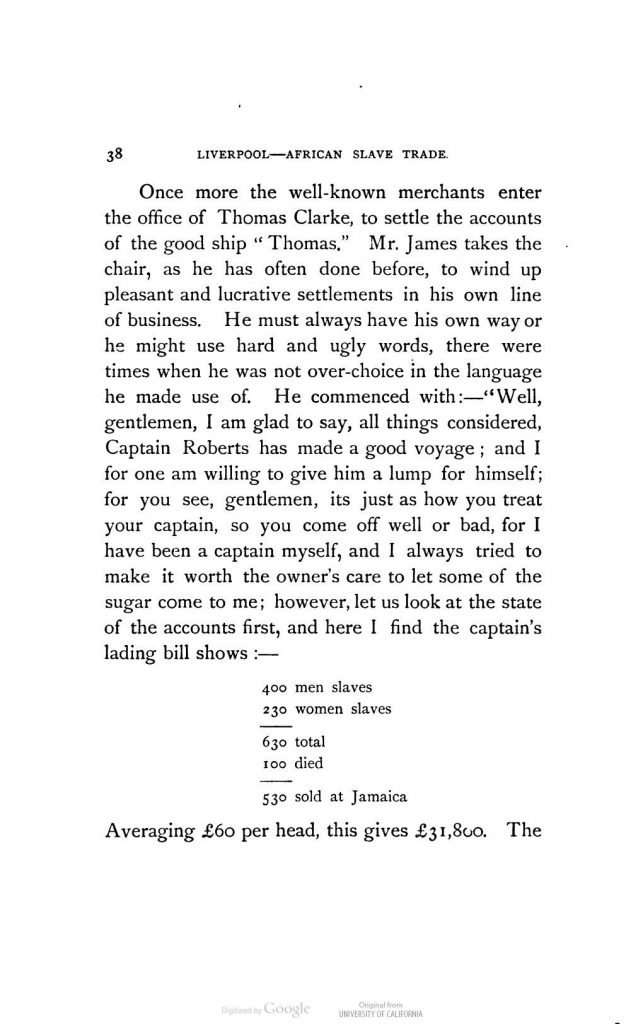 Once more the well-known merchants enter the office of Thomas Clarke, to settle the accounts of the good ship “Thomas.” Mr. James takes the chair, as he has often done before, to wind up pleasant and lucrative settlements in his own line of business. He must always have his own way or he might use hard and ugly words, there were times when he was not over-choice in the language he made use of. He commenced with:—”Well, gentlemen, I am glad to say, all things considered, Captain Roberts has made a good voyage; and I for one am willing to give him a lump for himself; for you see, gentlemen, its just as how you treat your captain, so you come off well or bad, for I have been a captain myself, and I always tried to make it worth the owner’s care to let some of the sugar come to me; however, let us look at the state of the accounts first, and here I find the captain’s lading bill shows :— 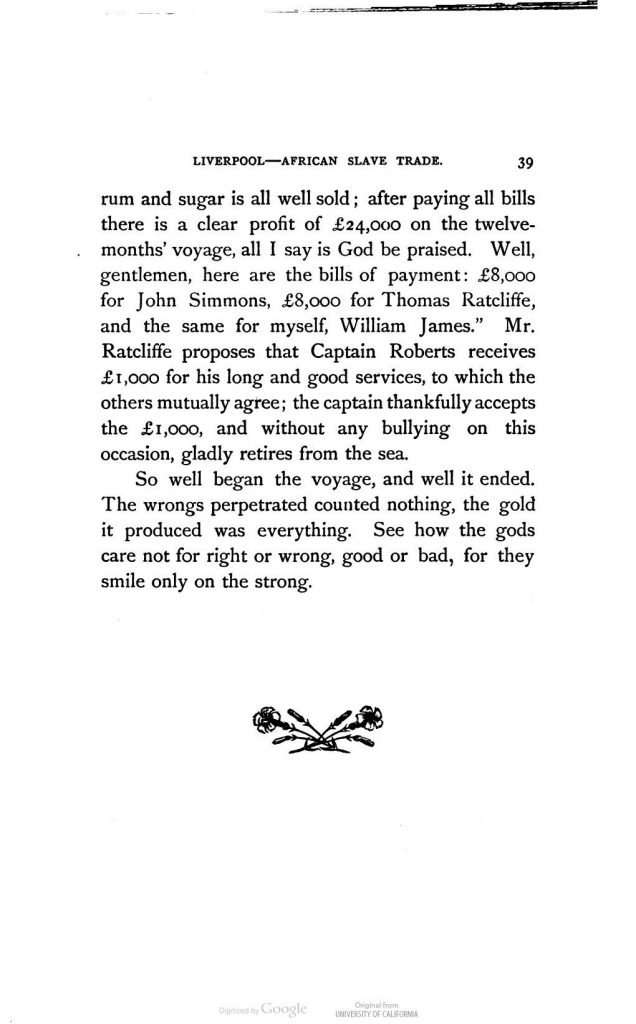 rum and sugar is all well sold; after paying all bills there is a clear profit of £24,000 on the twelvemonths’ voyage, all I say is God be praised. Well, gentlemen, here are the bills of payment: £8,000 for John Simmons, £8,000 for Thomas Ratcliffe, and the same for myself, William James.” Mr. Ratcliffe proposes that Captain Roberts receives £1,000 for his long and good services, to which the others mutually agree; the captain thankfully accepts the £1,000, and without any bullying on this occasion, gladly retires from the sea.

So well began the voyage, and well it ended. The wrongs perpetrated counted nothing, the gold it produced was everything. See how the gods care not for right or wrong, good or bad, for they smile only on the strong.

RELATED CONTENT
Categories:
Type:
MAP
TIMELINE
1884
An anonymous writer in Liverpool, England, publishes Liverpool and Slavery: An Historical Account of the Liverpool-African Slave Trade, identifying himself only as "a Genuine 'Dicky Sam." The book serves as a chronicle of the Liverpool slave trade.
FURTHER READING