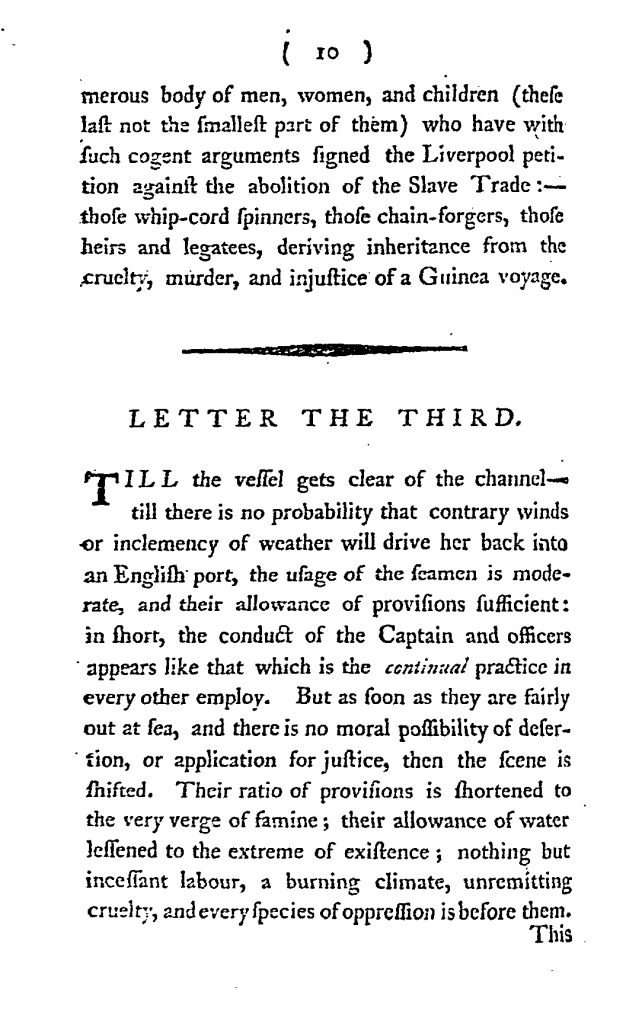 Observations on a Guinea voyage, Page 10

Till the vessel gets clear of the channel—till there is no probability that contrary winds or inclemency of weather will drive her back into an English port, the usage of seamen is moderate, and their allowance of provisions sufficient: in short, the conduct of the Captain and officers appears like that which is the continual practice in every other employ. But as soon as they are fairly out at sea, and there is no moral possibility of desertion, or application for justice, then the scene is shifted. Their ratio of provisions is shortened to the very verge of famine; their allowance of water lessened to the extreme of existence; nothing but incessant labour, a burning climate, unremitting cruelty, and every species of oppression is before them. 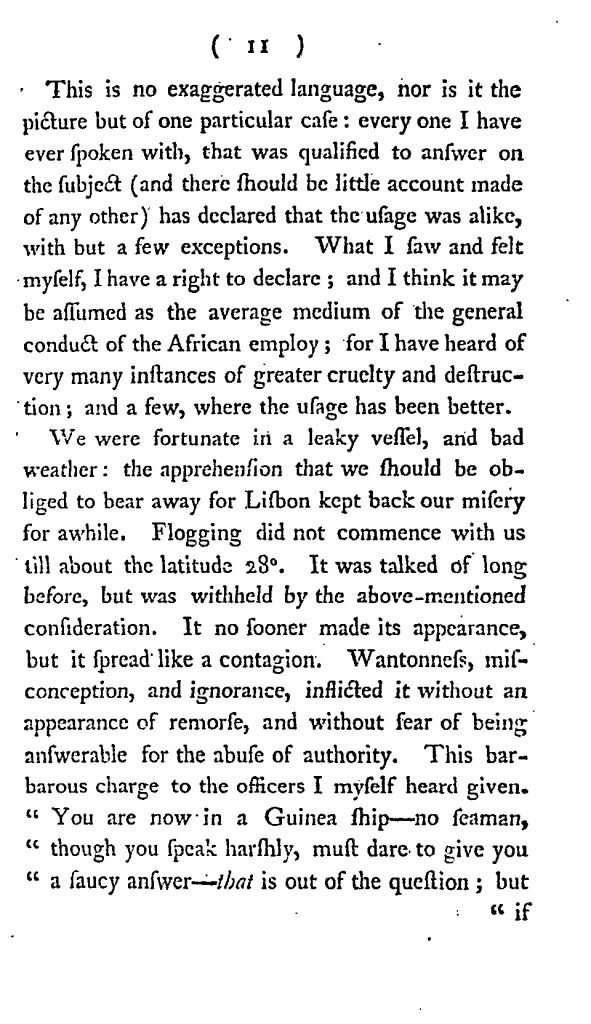 Observations on a Guinea voyage, Page 11

This is no exaggerated language, nor is it the picture but of one particular case: every one I have ever spoken with, that was qualified to answer on the subject (and there should be little account made of any other) has declared that the usage was alike, with but a few exceptions. What I saw and felt myself, I have a right to declare; and I think it may be assumed as the average medium of the general conduct of the African employ; for I have heard of very many instances of greater cruelty and destruction; and a few, where the usage has been better.

We were fortunate in a leaky vessel, and bad weather: the apprehension that we should be obliged to bear away for Lisbon kept back our misery for awhile. Flogging did not commence with us till about the latitude 28˚. It was talked of long before, but was withheld by the above-mentioned consideration. It no sooner made its appearance, but it spread like a contagion. Wantonness, misconception, and ignorance, inflicted it without an appearance of remorse, and without fear of being answerable for the abuse of authority. This barbarous charge to the officers I myself heard given. “You are now in a Guinea ship—no seaman, though you speak harshly, must dare to give you a saucy answer—that is out of the question; but 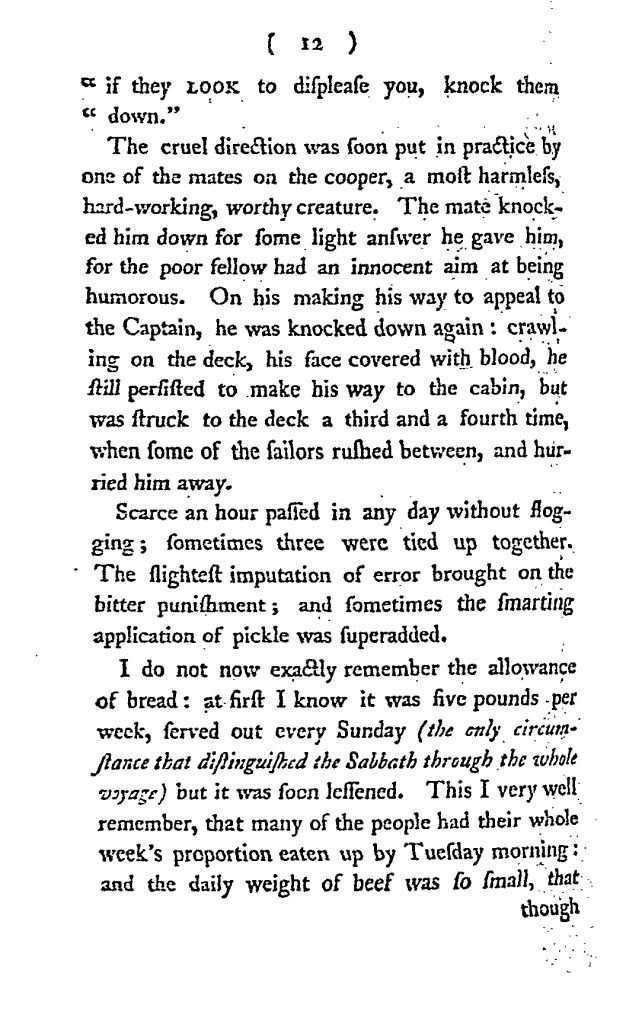 Observations on a Guinea voyage, Page 12

if they LOOK to displease you, knock them down.”

The cruel direction was soon put in practice by one of the mates on the cooper, a most harmless, hard-working, worthy creature. The mate knocked him down for some light answer he gave him, for the poor fellow had an innocent aim at being humorous. On his making his way to appeal to the Captain, he was knocked down again: crawling on the deck, his face covered with blood, he still persisted to make his way to the cabin, but was struck to the deck a third and a fourth time, when some of the sailors rushed between, and hurried him away.

Scarce an hour passed in any day without flogging; sometimes three were tied up together. The slightest imputation of error brought on the bitter punishment; and sometimes the smarting application of pickle was superadded.

I do not know exactly remember the allowance of bread: at first I know it was five pounds per week, served out every Sunday (the only circumstance that distinguished the Sabbath through the whole voyage) but it was soon lessened. This I very well remember, that many of the people had their whole week’s proportion eaten up by Tuesday morning: and the daily weight of beef was so small, that 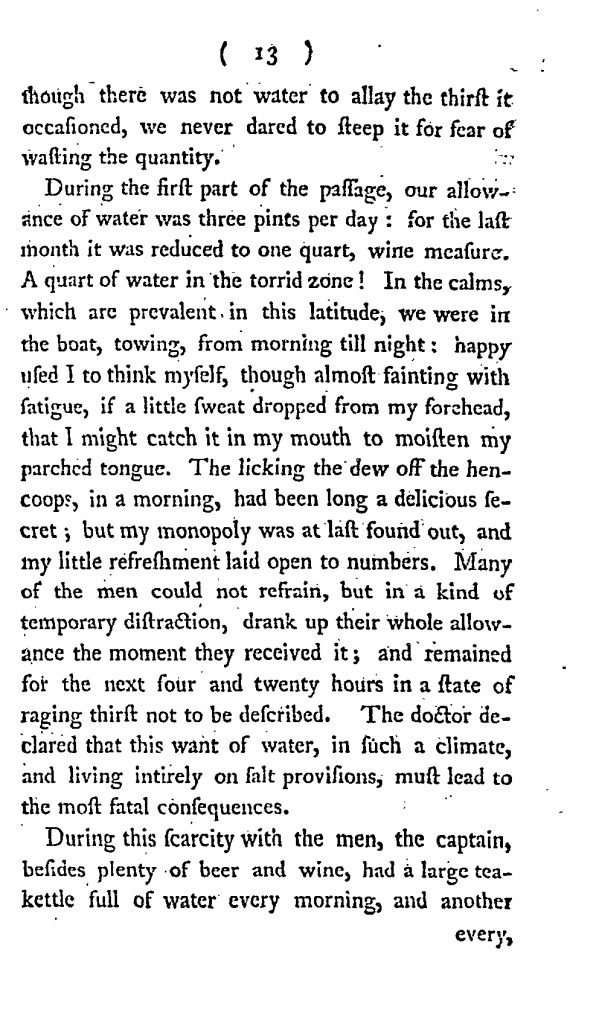 Observations on a Guinea voyage, Page 13

though there was not water to allay the thirst it occasioned, we never dared to steep it for fear of wasting the quantity.

During the first part of the passage, our allowance of water was three pints per day: for the last month it was reduced to one quart, wine measure. A quart of water in the torrid zone! In the calms, which are prevalent in this latitude, we were in the boat, towing, from morning till night: happy used I to think myself, though almost fainting with fatigue, if a little sweat dropped from my forehead, that I might catch it in my mouth to moisten my parched tongue. The licking the dew off the hencoops, in a morning, had been long a delicious secret; but my monopoly was at last found out, and my little refreshment laid open to numbers. Many of the men could not refrain, but in a kind of temporary distraction, drank up their whole allowance the moment they received it; and remained for the next four and twenty hours in a state of raging thirst not to be described. The doctor declared that this want of water, in such a climate, and living intirely on salt provisions, must lead to the most fatal consequences.

During this scarcity with the men, the captain, besides plenty of beer and wine, had a large teakettle full of water every morning, and another 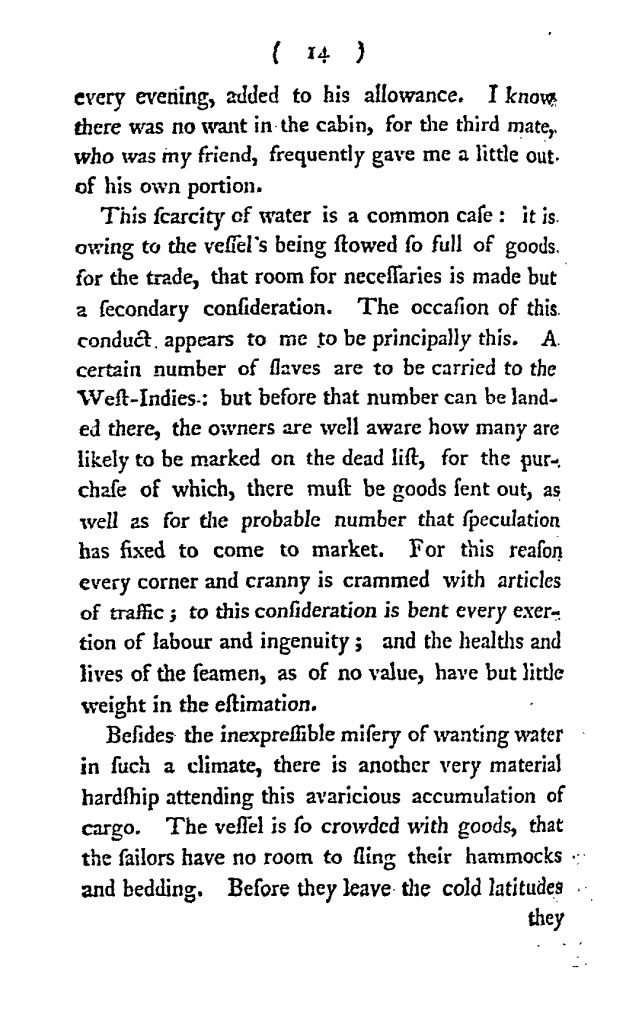 Observations on a Guinea voyage, Page 14

every evening, added to his allowance. I know there was no want in the cabin, for the third mate, who was my friend, frequently gave me a little out of his portion.

This scarcity of water is a common case: it is owing to the vessel’s being stowed so full of goods for the trade, that room for necessaries is made but a secondary consideration. The occasion of this conduct appears to me to be principally this. A certain number of slaves are to be carried to the West-Indies: but before that number can be landed there, the owners are well aware how many are likely to be marked on the dead list, for the purchase of which, there must be goods sent out, as well as the probable number that speculation has fixed to come to market. For this reason every corner and cranny is crammed with articles of traffic; to this consideration is bent every exertion of labour and ingenuity; and the healths and lives of the seamen, as of no value, have but little weight in the estimation.

Besides the inexpressible misery of wanting water in such a climate, there is another very material hardship attending this avaricious accumulation of cargo. The vessel is so crowded with goods, that the sailors have no room to sling their hammocks and bedding. Before they leave the cold latitudes 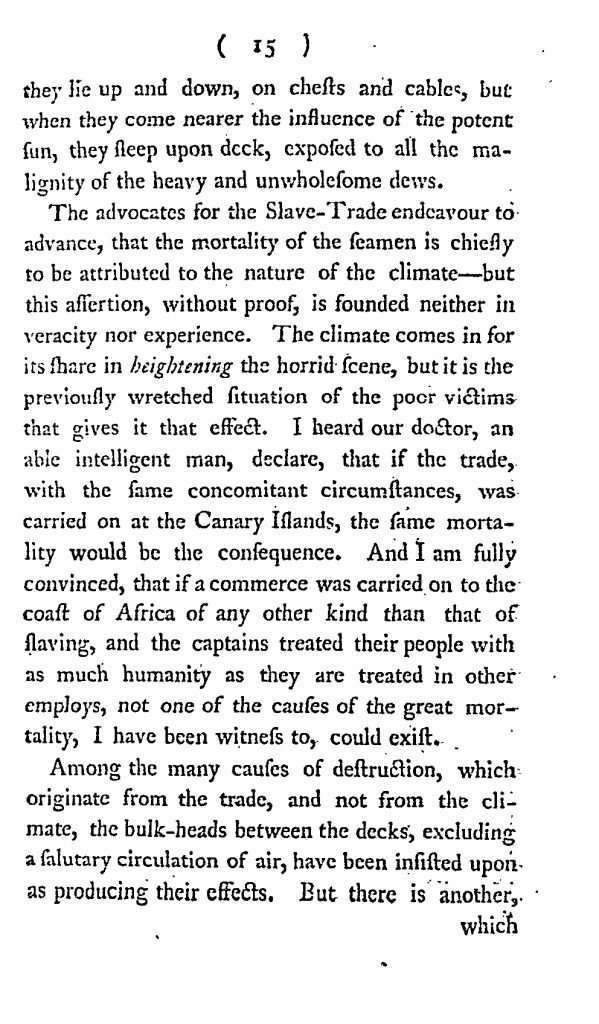 Observations on a Guinea voyage, Page 15

they lie up and down, on chests and cables, but when they come nearer the influence of the potent sun, the sleep upon dock, exposed to all the malignity of the heavy and unwholesome dews.

The advocates for the Slave-Trade endeavour to advance, that the mortality of the seamen is chiefly to be attributed to the nature of the climate—but this assertion, without proof, is founded neither in veracity nor experience. The climate comes in for its share in heightening the horrid scene, but it is the previously wretched situation of the poor victims that gives it that effect. I heard our doctor, an able intelligent man, declare, that if the trade, with the same concomitant circumstances, was carried on at the Canary Islands, the same mortality would be the consequence. And I am fully convinced, that if a commerce was carried on to the coast of Africa of any other kind than that of slaving, and the captains treated their people with as much humanity as they are treated in other employs, not one of the causes of the great mortality, I have been witness to, could exist.

Among the many causes of destruction, which originate from the trade, and not from the climate, the bulk-heads between the decks, excluding a salutary circulation of air, have been insisted upon as producing their effects. But there is another, 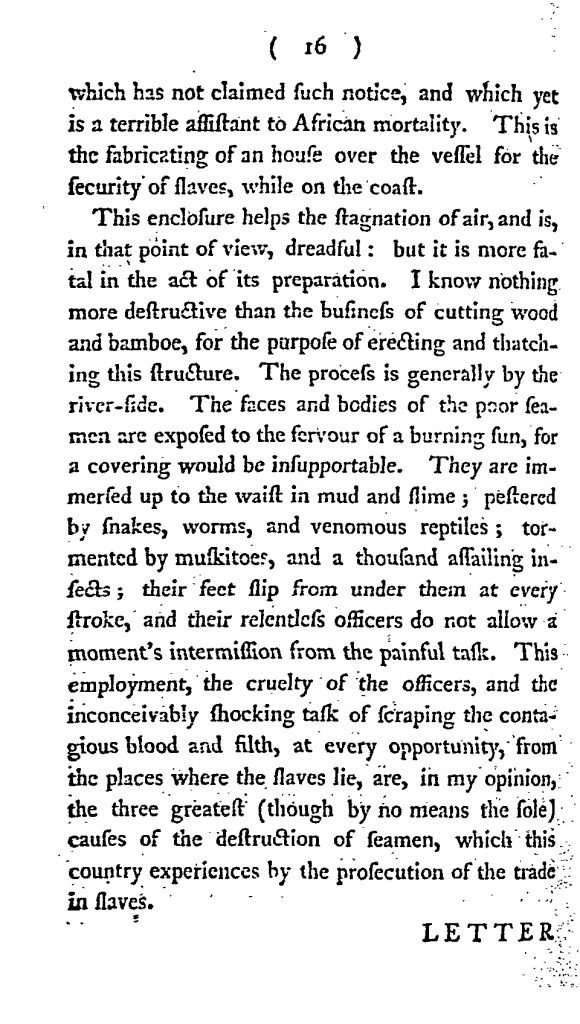 Observations on a Guinea voyage, Page 16

which has not claimed such notice, and which yet is a terrible assistant to African mortality. This is the fabricating of an house over the vessel for the security of slaves, while on the coast.

This enclosure helps the stagnation of air, and is, in that point of view, dreadful: but it is more fatal in the act of its preparation. I know nothing more destructive than the business of cutting wood and bamboe, for the purpose of erecting and thatching this structure. The process is generally by the river-side. The faces and bodies of the poor seamen are exposed to the fervour of a burning sun, for a covering would be insupportable. They are immersed up to the waist in mud and slime; pestered by snakes, worms, and venomous reptiles; tormented by muskitoes, and a thousand assailing insects; their feet slip from under them at every stroke, and their relentless officers do not allow a moment’s intermission from the painful task. This employment, the cruelty of the officers, and the inconceivably shocking talk of scraping the contagious blood and filth, at every opportunity, from the places where the slaves lie, are, in my opinion, the three greatest (though by no means the sole) causes of the destruction of seamen, which this country experiences by the prosecution of the trade in slaves.

RELATED CONTENT
Categories:
Type:
MAP
TIMELINE
May 1788
The Society for Effecting the Abolition of the Slave Trade in London publishes Observations on a Guinea voyage. In a series of letters addressed to the Rev. Thomas Clarkson by the former slave-ship seaman James Field Stanfield.
FURTHER READING