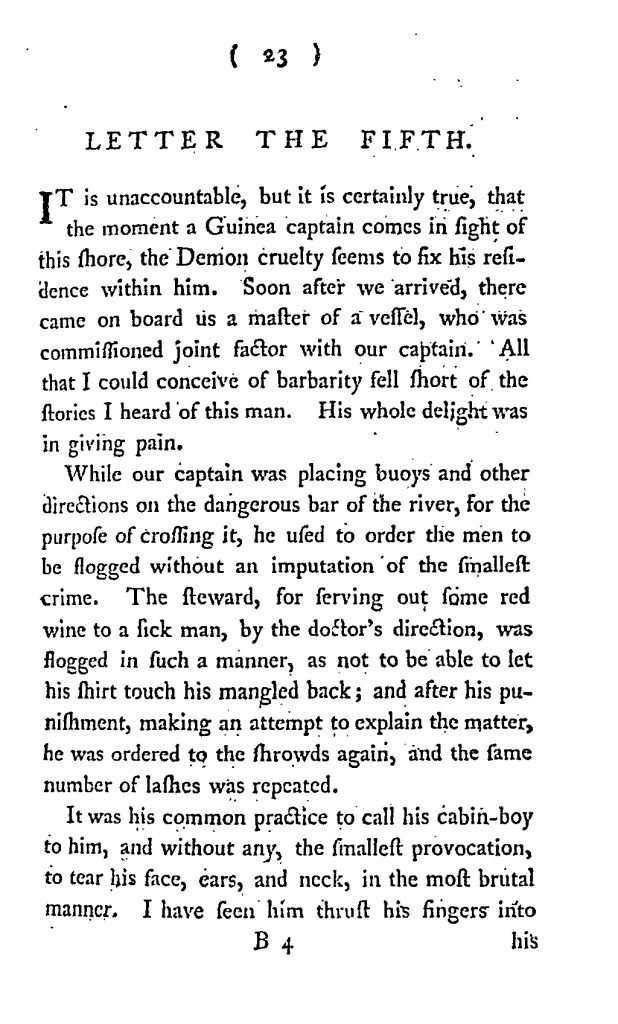 Observations on a Guinea voyage, Page 23

It is unaccountable, but it is certainly true, that the moment a Guinea captain comes in sight of this shore, the Demon cruelty seems to fix his residence within him. Soon after we arrived, there came on board us a master of a vessel, who was commissioned joint factor with our captain. All that I could conceive of barbarity fell short of the stories I heard of this man. His whole delight was in giving pain.

While our captain was placing buoys and other directions on the dangerous bar of the river, for the purpose of crossing it, he used to order the men to be flogged without an imputation of the smallest crime. The steward, for serving out some red wine to a sick man, by the doctor’s direction, was flogged in such a manner, as not to be able to let his shirt touch his mangled back; and after his punishment, making an attempt to explain the matter, he was ordered to the shrowds again, and the same number of lashes was repeated.

It was his common practice to call his cabin-boy to him, and without any, the smallest provocation, to tear his face, ears, and neck, in the most brutal manner. I have seen him thrust his fingers into 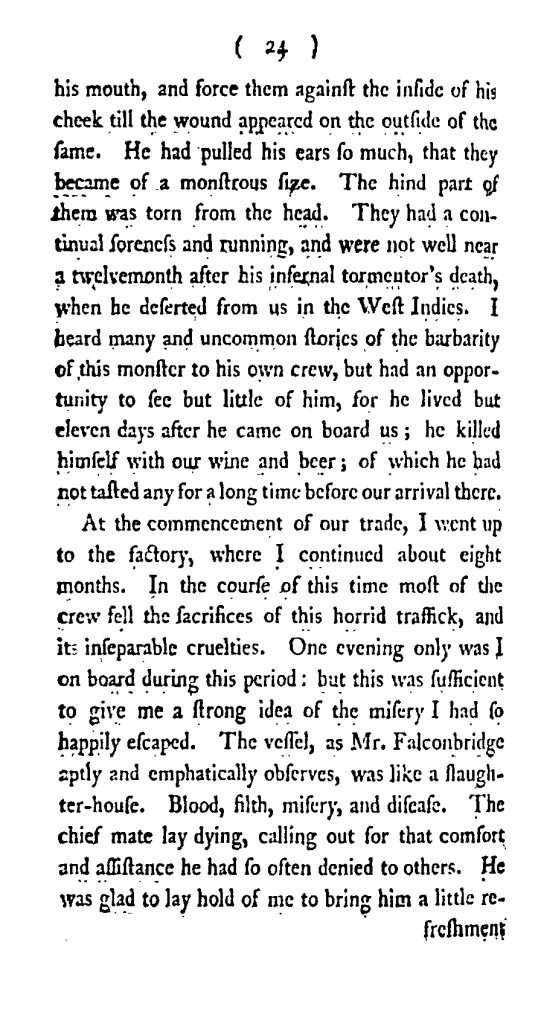 Observations on a Guinea voyage, Page 24

his mouth, and force them against the inside of his cheek till the wound appeared on the outside of the same. He had pulled his ears so much, that they became of a monstrous size. The hind part of them was torn from the head. They had a continual soreness and running, and were not well near a twelvemonth after his infernal tormentor’s death, when he deserted from us in the West Indies. I heard many and uncommon stories of the barbarity of this monster to his own crew, but had an opportunity to see but little of him, for he lived but eleven days after he came on board us; he killed himself with our wine and beer; of which he had not tasted any for a long time before our arrival there.

At the commencement of our trade, I went up to the factory, where I continued about eight months. In the course of this time most of the crew fell the sacrifices of this horrid traffick, and its inseparable cruelties. One evening only was I on board during this period: but this was sufficient to give me a strong idea of the misery I had so happily escaped. The vessel, as Mr. Falconbridge aptly and emphatically observes, was like a slaughter-house. Blood, filth, misery, and disease. The chief mate lay dying, calling out for that comfort and assistance had had so often denied to others. He was glad to lay hold of me to bring him a little re- 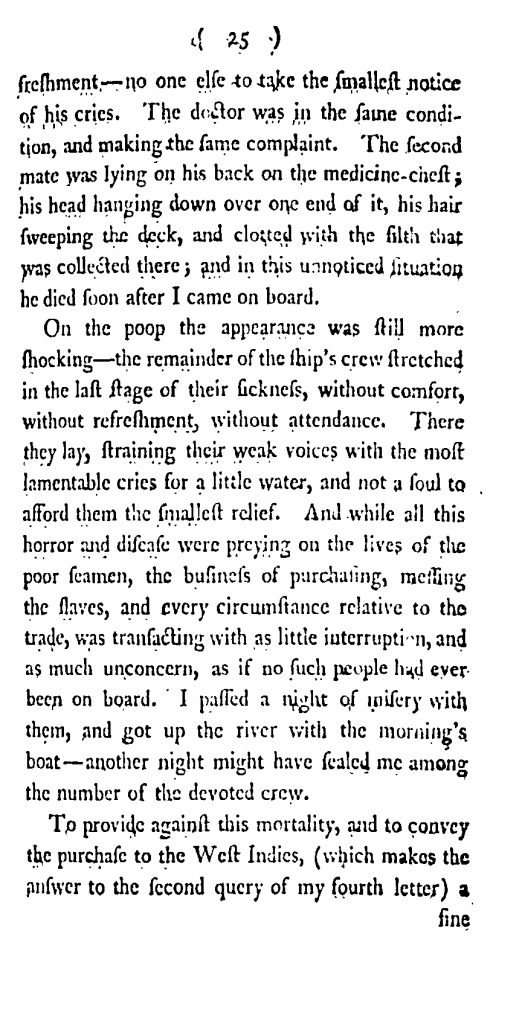 Observations on a Guinea voyage, Page 25

freshment—no one else to take the smallest notice of his cries. The doctor was in the same condition, and making the same complaint. The second mate was lying on his back on the medicine-chest; his head hanging down over one end of it, his hair sweeping the deck, and clotted with the filth that was collected there; and in this unnoticed situation he died soon after I came on board.

On the poop the appearance was still more shocking—the remainder of the ship’s crew stretched in the last stage of their sickness, without comfort, without refreshment, without attendance. There they lay, straining their weak voices with the most lamentable cries for a little water, and not a soul to afford them the smallest relief. And while all this horror and disease were preying on the lives of the poor seamen, the business of purchasing, messing the slaves, and every circumstance relative to the trade, was transacting with as little interruption, and as much unconcern, as if no such people had ever been on board. I passed a night of misery with them, and got up the river with the morning’s boat—another night might have sealed me among the number of the devoted crew.

To provide against this mortality, and to convey the purchase to the West Indies, (which makes the answer to the second query of my fourth letter) a 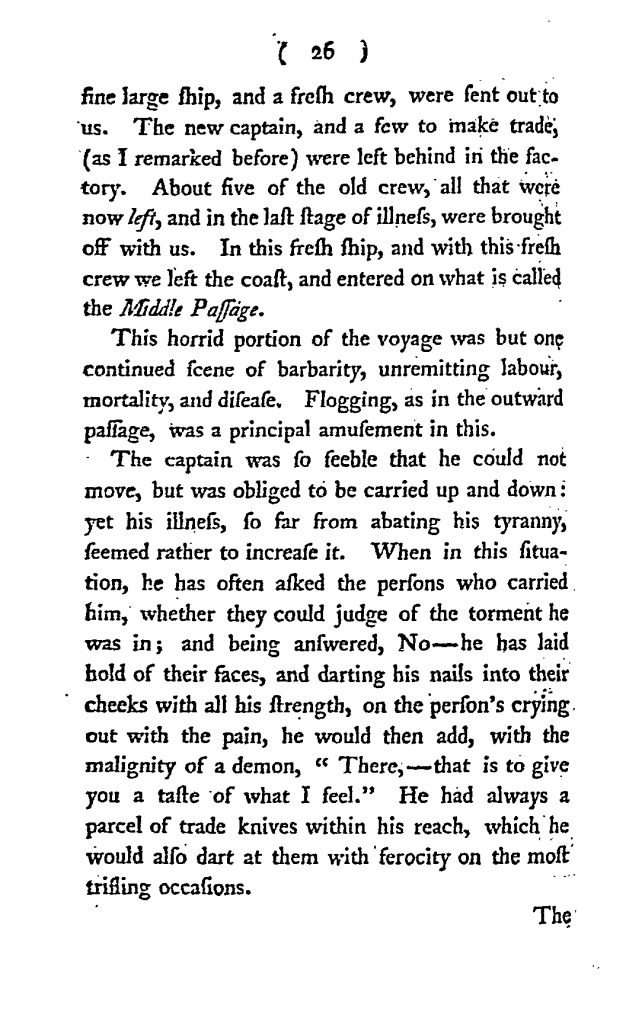 Observations on a Guinea voyage, Page 26

fine large ship, and a fresh crew, were sent out to us. The new captain, and a few to make trade, (as I remarked before) were left behind in the factory. About five of the old crew, all that were now left, and in the last stage of illness, were brought off with us. In this fresh ship, and with his fresh crew we left the coast, and entered on what is called the Middle Passage.

This horrid portion of the voyage was but one continued scene of barbarity, unremitting labour, mortality, and disease. Flogging, as in the outward passage, was a principal amusement in this.

The captain was so feeble that he could not move, but was obliged to be carried up and down: yet his illness, so far from abating his tyranny, seemed rather to increase it. When in this situation, he has often asked the persons who carried him, whether they could judge of the torment he was in; and being answered, No—he has laid hold of their faces, and darting his nails into their cheeks with all his strength, on the person’s crying out with the pain, he would then add, with the malignity of a demon, “There,—that is to give you a taste of what I feel.” He had always a parcel of trade knives within his reach, which he would also dart at them with ferocity on the most trifling occasions. 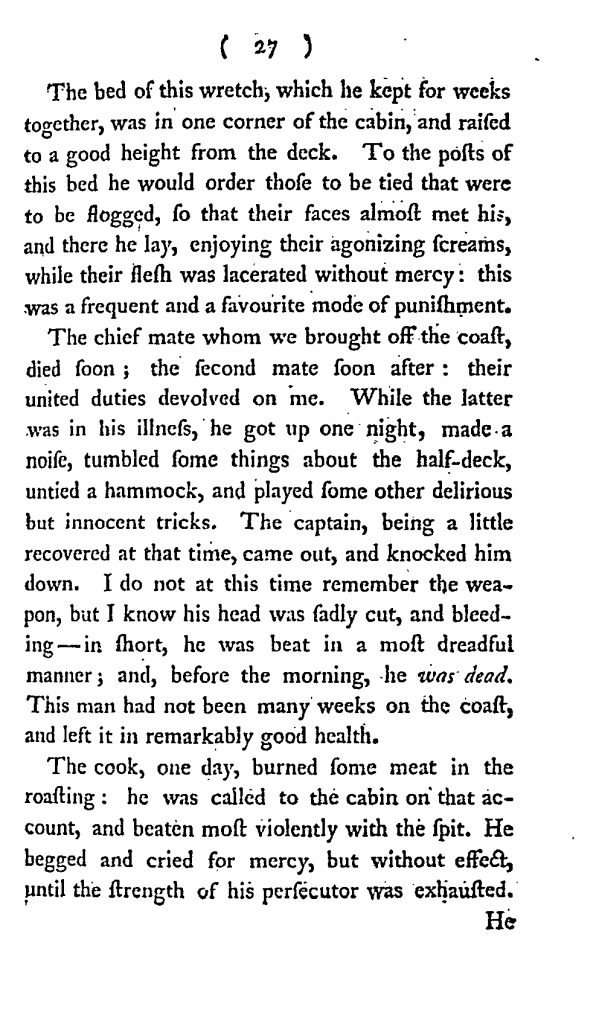 Observations on a Guinea voyage, Page 27

The bed of this wretch, which he kept for weeks together, was in one corner of the cabin, and raised to a good height from the deck. To the posts of this bed he would order those to be tied that were to be flogged, so that their faces almost met his, and there he lay, enjoying their agonizing screams, while their flesh was lacerated without mercy: this was a frequent and a favourite mode of punishment.

The chief mate whom we brought off the coast, died soon; the second mate soon after: their united duties devolved on me. While the latter was in his illness, he got up one night, made a noise, tumbled some things about the half-deck, untied a hammock, and played some other delirious but innocent tricks. The captain, being a little recovered at that time, came out, and knocked him down. I do not at this time remember the weapon, but know his head was sadly cut, and bleeding—in short, he was beat in a most dreadful manner; and, before the morning, he was dead. This man had not been many weeks on the coast, and left it in remarkably good health.

The cook, one day, burned some meat in the roasting: he was called to the cabin on that account, and beaten most violently with the spit. He begged and cried for mercy, but without effect, until the strength of his persecutor was exhausted. 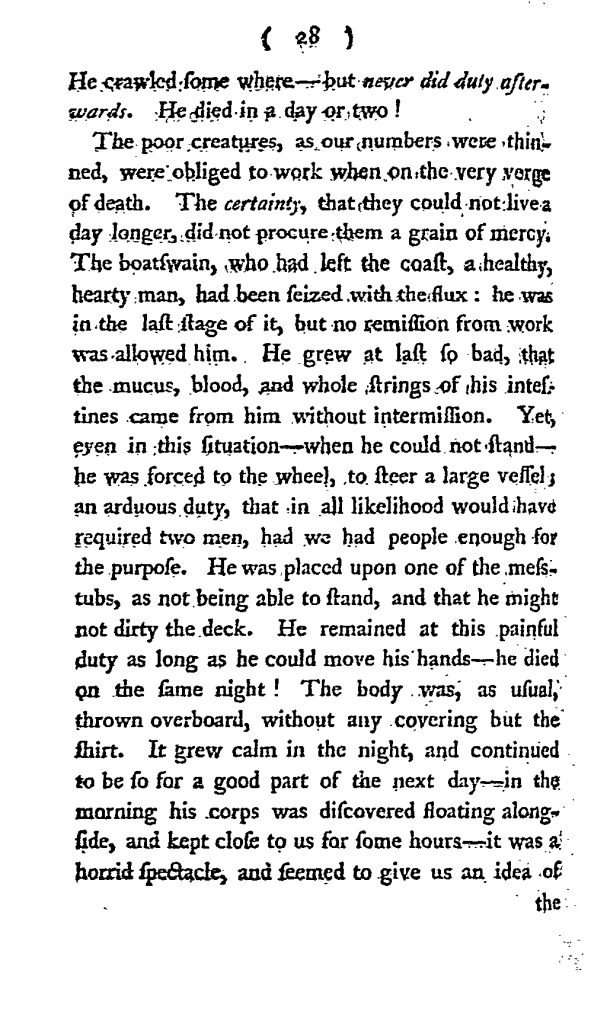 Observations on a Guinea voyage, Page 28

He crawled some where—but never did duty afterwards. He died in a day or two!

The poor creatures, as our numbers were thinned, were obliged to work when on the very verge of death. The certainty, that they could not live a day longer, did not procure them a grain of mercy. The boatswain, who had left the coast, a healthy, hearty man, had been seized with the flux: he was in the last stage of it, but no remission from work was allowed him. He grew at last so bad, that the mucus, blood, and whole strings of his intestines came from him without intermission. Yet, even in this situation—when he could not stand—he was forced to the wheel, to steer a large vessel; an arduous duty, that in all likelihood would have required two men, had we had people enough for the purpose. He was placed upon one of the messtubs, as not being able to stand, and that he might not dirty the deck. He remained at this painful duty as long as he could move his hands—he died on the same night! The body was, as usual, thrown overboard, without any covering but the shirt. It grew calm in the night, and continued to be so for a good part of the next day—in the morning his corps was discovered floating alongside, and kept close to us for some hours—it was a horrid spectacle, and seemed to give us an idea of 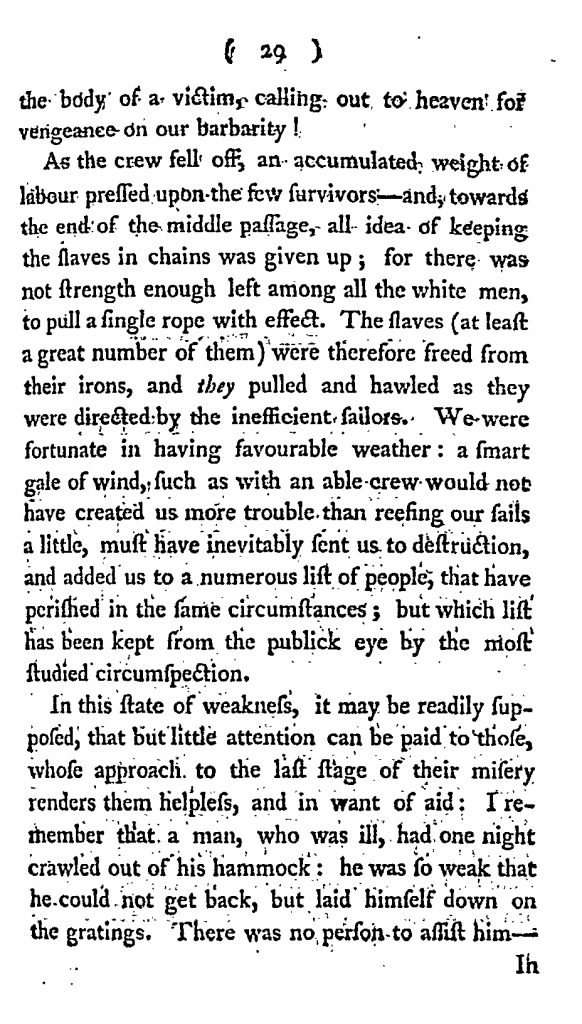 Observations on a Guinea voyage, Page 29

the body of a victim, calling out to heaven for vengeance on our barbarity!

As the crew fell off, an accumulated weight of labour pressed upon the few survivors—and, towards the end of the middle passage, all idea of keeping the slaves in chains was given up; for there was not strength enough left among all the white men, to pull a single rope with effect. The slaves (at least a great number of them) were therefore freed from their irons, and they pulled and hawled as they were directed by the inefficient sailors. We were fortunate in having favourable weather: a smart gale of wind, such as with an able crew would not have created us more trouble than reefing our sails a little, must have inevitable sent us to destruction, and added us to a numerous list of people, that have perished in the same circumstances; but which list has been kept from the publick eye by the most studied circumspection.

In this state of weakness, it may be readily supposed, that but little attention can be paid to those, whose approach to the last stage of their misery renders them helpless, and in want of aid: I remember that a man, who was ill, had one night crawled out of his hammock: he was so weak that he could not get back, but laid himself down on the gratings. There was no person to assist him— 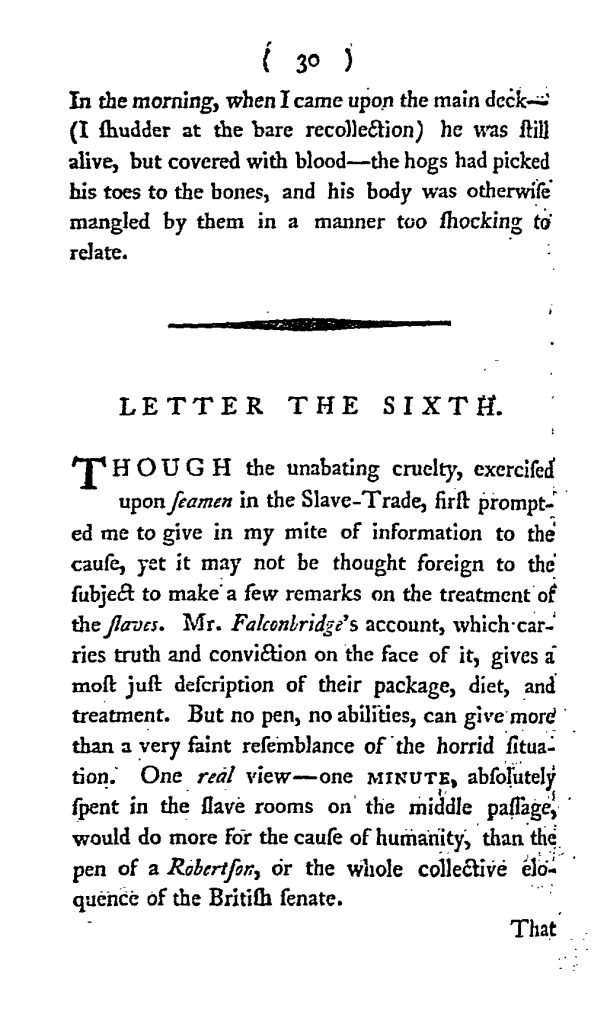 Observations on a Guinea voyage, Page 30

In the morning, when I came upon the main deck—(I shudder at the bare recollection) he was still alive, but covered with blood—the hogs had picked his toes to the bones, and his body was otherwise mangled by them in a manner too shocking to relate.

RELATED CONTENT
Categories:
Type:
MAP
TIMELINE
May 1788
The Society for Effecting the Abolition of the Slave Trade in London publishes Observations on a Guinea voyage. In a series of letters addressed to the Rev. Thomas Clarkson by the former slave-ship seaman James Field Stanfield.
FURTHER READING