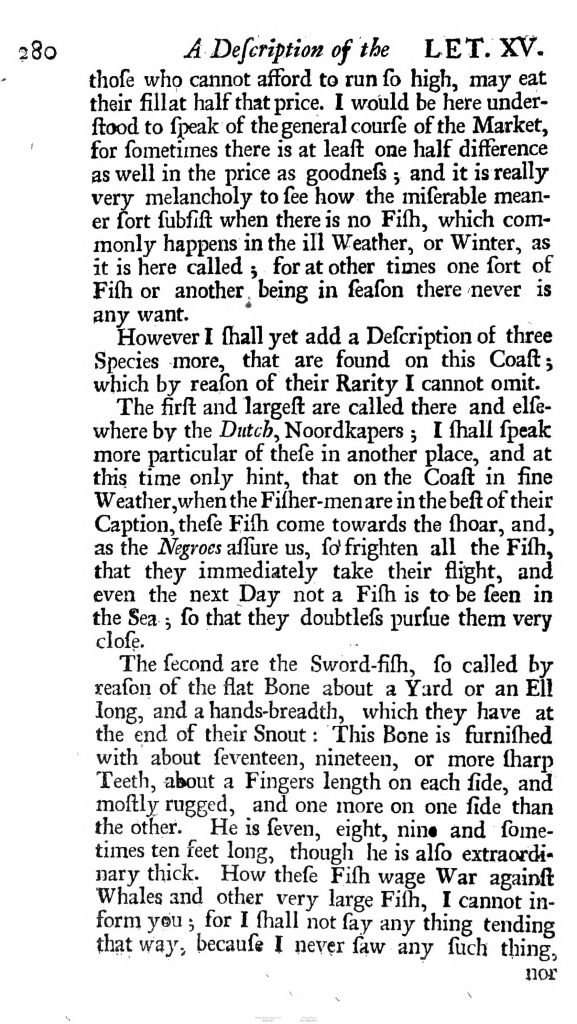 A new and accurate description of the coast of Guinea, Page 280

However I shall yet add a Description of three Species more, that are found on this Coast; which by reason of their Rarity I cannot omit.

The first and largest are called there and elsewhere by the Dutch, Noordkapers; I shall speak more particular of these in another place, and at this time only hint, that on the Coast in fine Weather, when the Fisher-men are in the best of their Caption, these Fish come towards the shoar, and, as the Negroes assure us, so frighten all the Fish, that they immediately take their flight, and even the next Day not a Fish is to be seen in the Sea; so that they doubtless pursue them very close.

The second are the Sword-fish, so called by reason of the flat Bone about a Yard or an Ell long, and a hands-breadth, which they have at the end of their Snout: This Bone is furnished with about seventeen, nineteen, or more sharp Teeth, about a Fingers length on each side, and mostly rugged, and one more on one side than the other. He is seven, eight, nine and sometimes ten feet long, though he is also extraordinary thick. How these Fish wage War against Whales and other very large Fish, I cannot inform you; for I shall not say any thing tending that way, because I never saw any such thing, 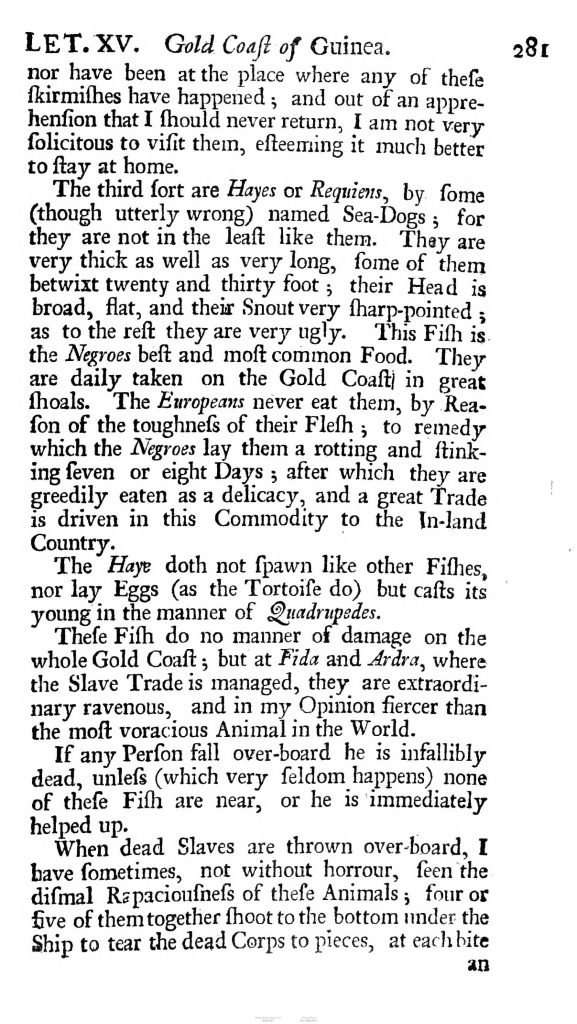 A new and accurate description of the coast of Guinea, Page 281

nor have been at the place where any of these skirmishes have happened; and out of an apprehension that I should never return, I am not very solicitous to visit them, esteeming it much better to stay at home.

The third sort are Hayes or Requiens, by some (though utterly wrong) named Sea-Dogs; for they are not in the least like them. They are very thick as well as very long, some of them betwixt twenty and thirty foot; their Head is broad, flat, and their Snout very sharp-pointed; as to the rest they are very ugly. This Fish is the Negroes best and most common Food. They are daily taken on the Gold Coast in great shoals. The Europeans never eat them, by Reason of the toughness of their Flesh; to remedy which the Negroes lay them a rotting and stinking seven or eight Days; after which they are greedily eaten as a delicacy, and a great Trade is driven in this Commodity to the In-land Country.

The Haye doth now spawn like other Fishes, nor lay Eggs (as the Tortoise do) but casts its young in the manner of Quadrupedes.

These Fish do no manner of damage on the whole Gold Coast; but at Fida and Ardra, where the Slave Trade is managed, they are extraordinary ravenous, and in my Opinion fiercer than the most voracious Animal in the World.

If any Person fall over-board he is infallibly dead, unless (which very seldom happens) none of these Fish are near, or he is immediately helped up.

When dead Slaves are thrown over-board, I have sometimes, not without horrour, seen the dismal Rapaciousness of these Animals; four or five of them together shoot to the bottom under the Ship to tear the dead Corps to pieces, at each bite 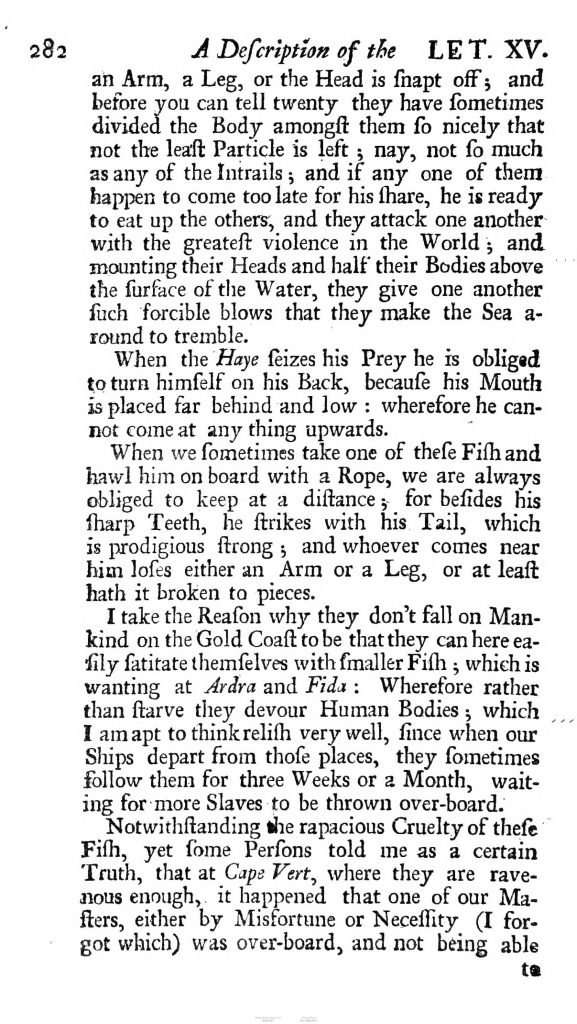 A new and accurate description of the coast of Guinea, Page 282

an Arm, a Leg, or the Head is snapt off; and before you can tell twenty they have sometimes divided the Body amongst them so nicely that not the least Particle is left; nay, not so much as any of the Intrails; and if any one of them happen to come too late for his share, he is ready to eat up the others, and they attack one another with the greatest violence in the World; and mounting their Heads and half their Bodies above the surface of the Water, they give one another such forcible blows that they make the Se around to tremble.

When the Haye seizes his Prey he is obliged to turn himself on his Back, because his Mouth is placed far behind and low: wherefore he cannot come at any thing upwards.

When we sometimes take one of these Fish and hawl him on board with a Rope, we are always obliged to keep at a distance; for besides his sharp Teeth, he strikes with his Tail, which is prodigious strong; and whoever comes near him loses either an Arm or a Leg, or at least hath it broken to pieces.

I take the Reason why they don’t fall on Mankind on the Gold Coast to be that they can here easily satiate themselves with smaller Fish; which is wanting at Ardra and Fida: Wherefore rather than starve they devour Human Bodies; which I am apt to think relish very well, since when our Ships depart from those places, they sometimes follow them for three Weeks or a Month, waiting for more Slaves to be thrown over-board.

Notwithstanding the rapacious Cruelty of these Fish, yet some Persons told me as a certain Truth, that at Cape Vert, where they are ravenous enough, it happened that one of our Masters, either by Misfortune or Necessity (I forgot which) was over-board, and not being able 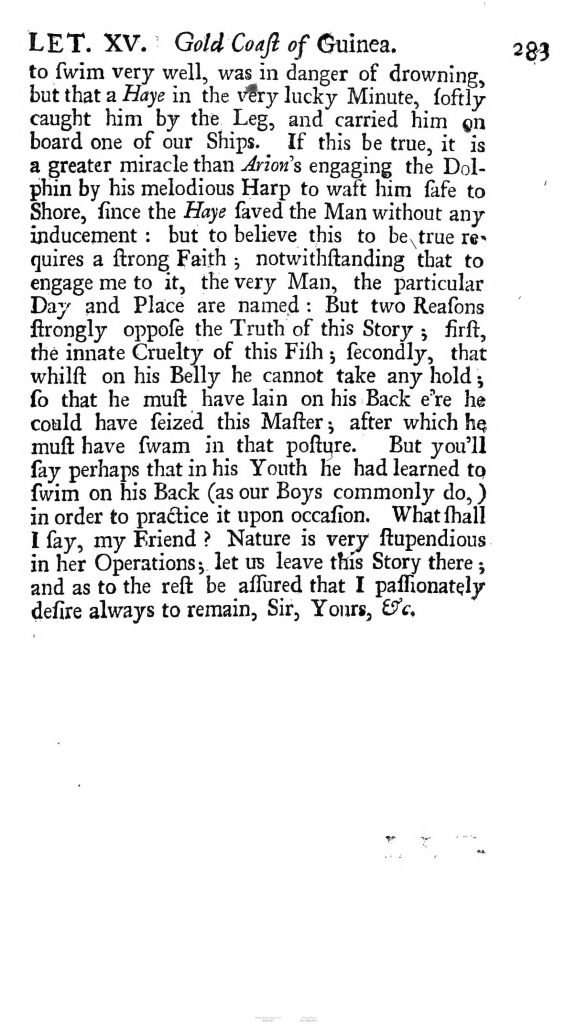 A new and accurate description of the coast of Guinea, Page 283

to swim very well, was in danger of drowning, but that a Haye in the very lucky Minute, softly caught him by the Leg, and carried him on board one of our Ships. If this be true, it is a greater miracle than Arion‘s engaging the Dolphin by his melodious Harp to waft him safe to Shore, since the Haye saved the Man without any inducement: but to believe this to be true requires a strong Faith; notwithstanding that to engage me to it, the very Man, the particular Day and Place are named: But two Reasons strongly oppose the Truth of this Story; first, the innate Cruelty of the Fish; secondly, that whilst on his Belly he cannot take any hold; so that he must have lain on his Back e’re he could have seized this Master; after which he must have swam in that posture. But you’ll say perhaps that in his Youth he had learned to swim on his Back (as our Boys commonly do,) in order to practice it upon occasion. What shall I say, my Friend? Nature in very stupendious in her Operations; let us leave this Story there; and as to the rest be assured that I passionately desire always to remain, Sir, Yours, &c.

RELATED CONTENT
Categories:
Type:
MAP
TIMELINE
1705
The Dutch merchant William Bosman publishes in London New and Accurate Description of the Coast of Guinea, Divided into the Gold, the Slave, and the Ivory Coasts.
FURTHER READING