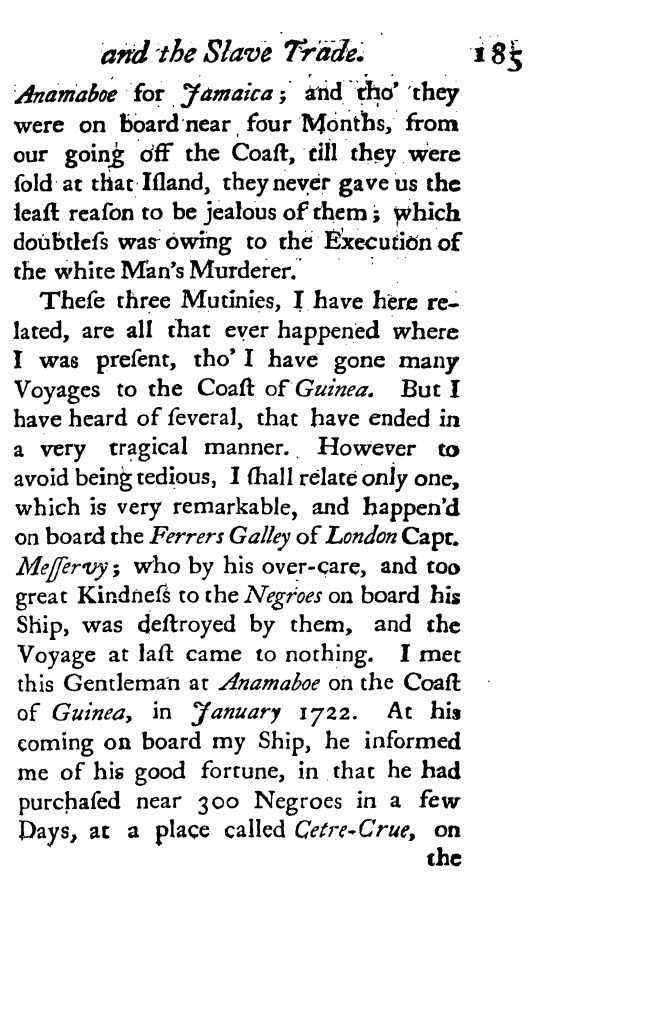 A new account of some parts of Guinea, and the slave-trade, Page 185

These three Mutinies, I have here related, are all that ever happened where I was present, tho’ I have gone many Voyages to the Coast of Guinea. But I have heard of several, that have ended in a very tragical manner. However to avoid being tedious, I shall relate only one, which is very remarkable, and happen’d on board the Ferrers Galley of London Capt. Messervy; who by his over-care, and too great Kindness to the Negroes on board his Ship, was destroyed by them, and the Voyage at last came to nothing. I met this Gentleman at Anamaboe on the Coast of Guinea, in January 1722. At his coming on board my Ship, he informed me of his good fortune, in that he had purchased near 300 Negroes in a few Days, at a place called Cetre-Crue, on 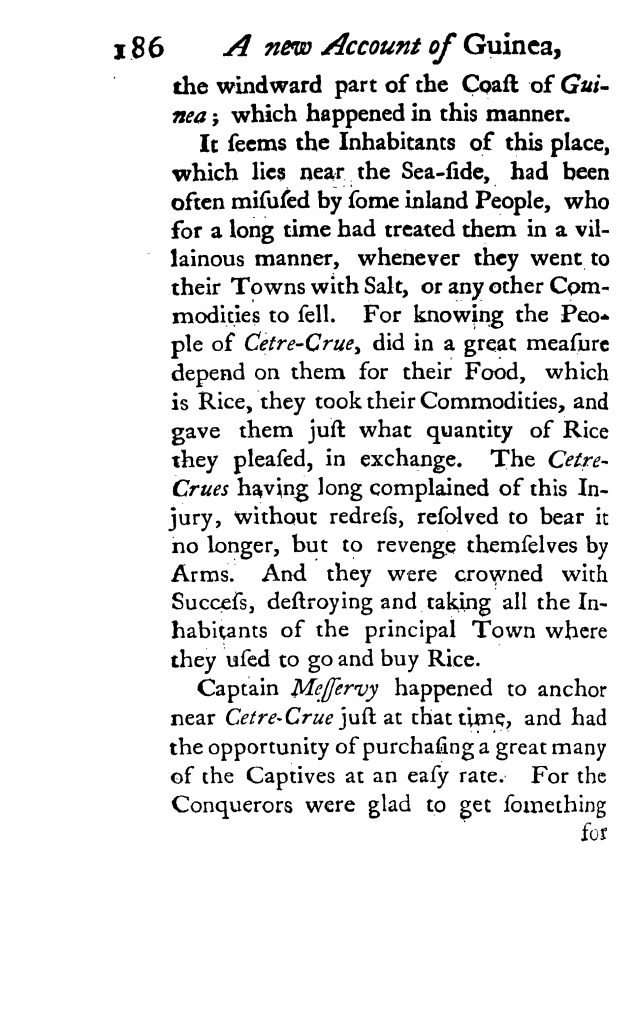 A new account of some parts of Guinea, and the slave-trade, Page 186

the windward part of the Coast of Guinea; which happened in this manner.

It seems the Inhabitants of this place, which lies near the Sea-side, had been often misused by some inland People, who for a long time had treated them in a villainous manner, whenever they went to their Towns with Salt, or any other Commodities to sell. For knowing the People of Cetre-Crue, did in a great measure depend on them for their Food, which is Rice, they took their Commodities, and gave them just what quantity of Rice they pleased, in exchange. The Cetre-Crues having long complained of this Injury, without redress, resolved to bear it no longer, but to revenge themselves by Arms. And they were crowned with Success, destroying and taking all the Inhabitants of the principal Town where they used to go and buy Rice.

Captain Messervy happened to anchor near Cetre-Crue just at that time, and had the opportunity of purchasing a great many of the Captives at an easy rate. For the Conquerors were glad to get something 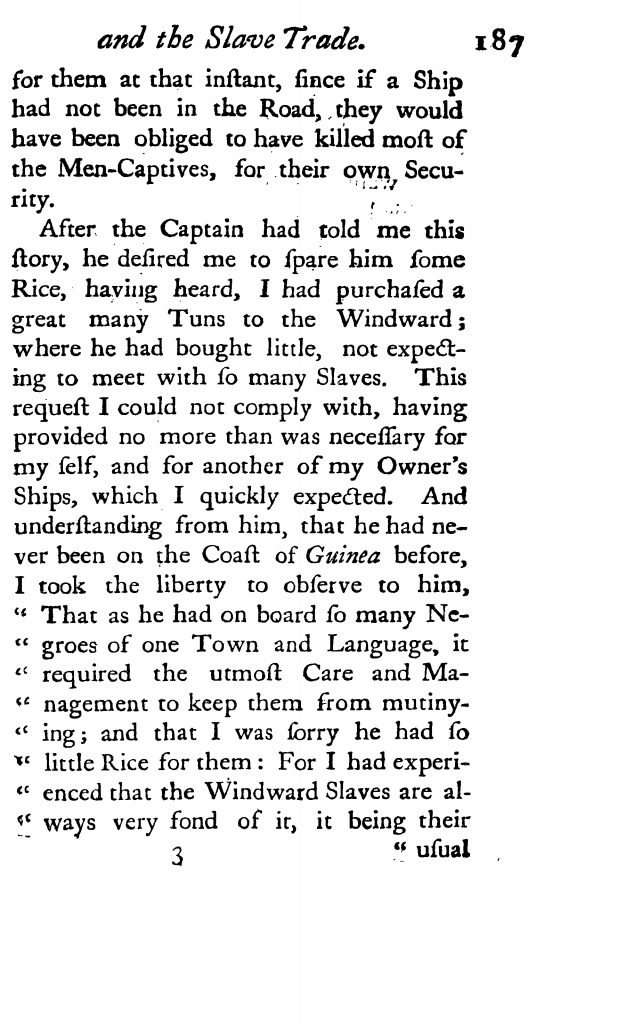 A new account of some parts of Guinea, and the slave-trade, Page 187

for them at that instant, since if a Ship had not been in the Road, they would have been obliged to have killed most of the Men-Captives, for their own Security.

After the Captain had told me this story, he desired me to spare him some Rice, having heard, I had purchased a great many Tuns to the Windward; where he had bought little, not expecting to meet with so many Slaves. This request I could not comly with, having provided no more than was necessary for my self, and for another of my Owner’s Ships, which I quickly expected. And understanding from him, that he had never been on the Coast of Guinea before, I took the liberty to observe to him, “That as he had on board so many Negroes of one Town and Language, it required the utmost Care and Management to keep them from mutinying; and that I was sorry he had so little Rice for them: For I had experienced that the Windward Slaves are always very fond of it, it being their 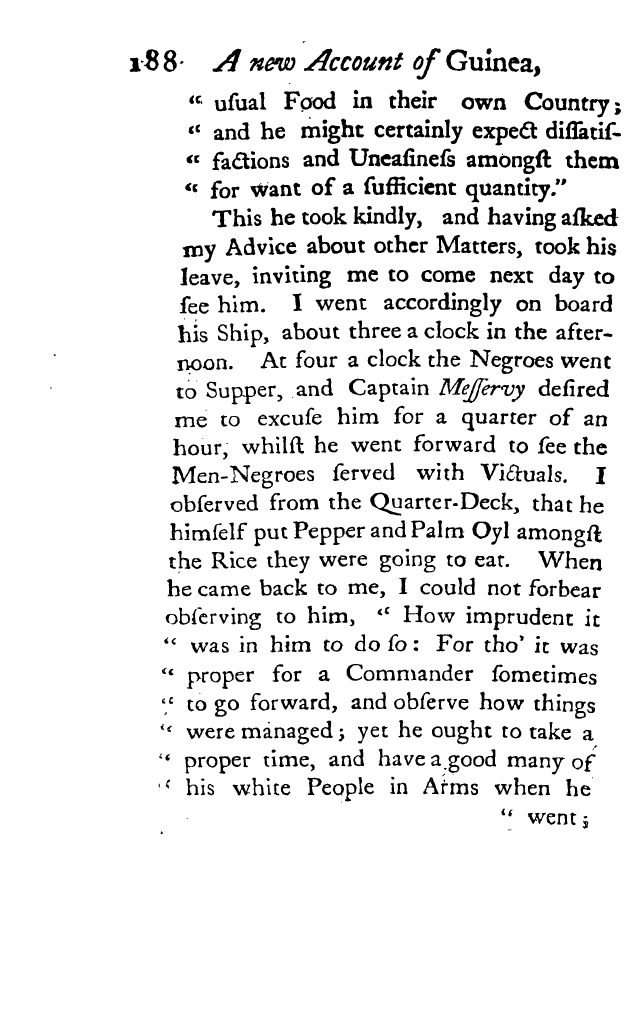 A new account of some parts of Guinea, and the slave-trade, Page 188

usual Food in their own Country; and he might certainly expect dissatisfactions and Uneasiness amongst them for want of a sufficient quantity.”

This he took kindly, and having asked my Advice about other Matters, took his leave, inviting me to come next day to see him. I went accordingly on board his Ship, about three a clock in the afternoon. At four a clock the Negroes went to Supper, and Captain Messervy desired me to excuse him for a quarter of an hour, whilst he went forward to see the Men-Negroes served with Victuals. I observed from the Quarter-Deck, that he himself put Pepper and Palm Oyl amongst the Rice they were going to eat. When he came back to me, I could not forbear observing to him, “How imprudent it was in him to do so: For tho’ it was proper for a Commander sometimes to go forward, and observe how things were managed; yet he ought to take a proper time, and have a good many of his white People in Arms when he 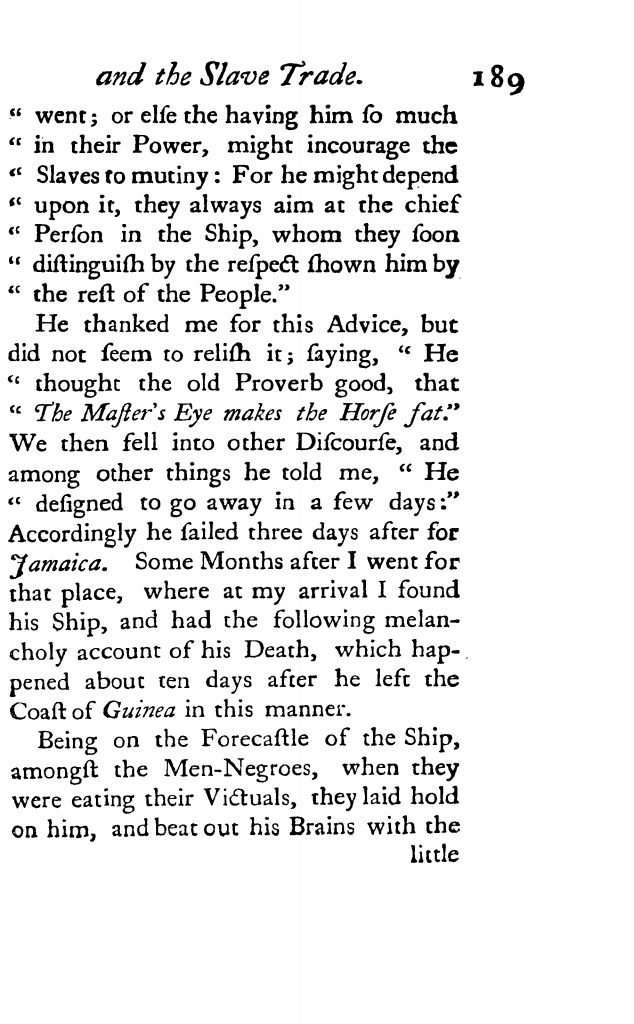 A new account of some parts of Guinea, and the slave-trade, Page 189

went; or else the having him so much in their Power, might incourage the Slaves to mutiny: For he might depend upon it, they always aim at the chief Person in the Ship, whom they soon distinguish by the respect shown him by the rest of the People.”

He thanked me for this Advice, but did not seem to relish it; saying, “He thought the old Proverb good, that The Master’s Eye makes the Horse fat.” We then fell into other Discourse, and among other things he told me, “He designed to go away in a few days.” Accordingly he sailed three days after for Jamaica. Some Months after I went for that place, where at my arrival I found his Ship, and had the following melancholy account of his Death, which happened about ten days after he left the Coast of Guinea in this manner.

Being on the Forecastle of the Ship, amongst the Men-Negroes, when they were eating their Victuals, they laid hold on him, and beat out his Brains with the 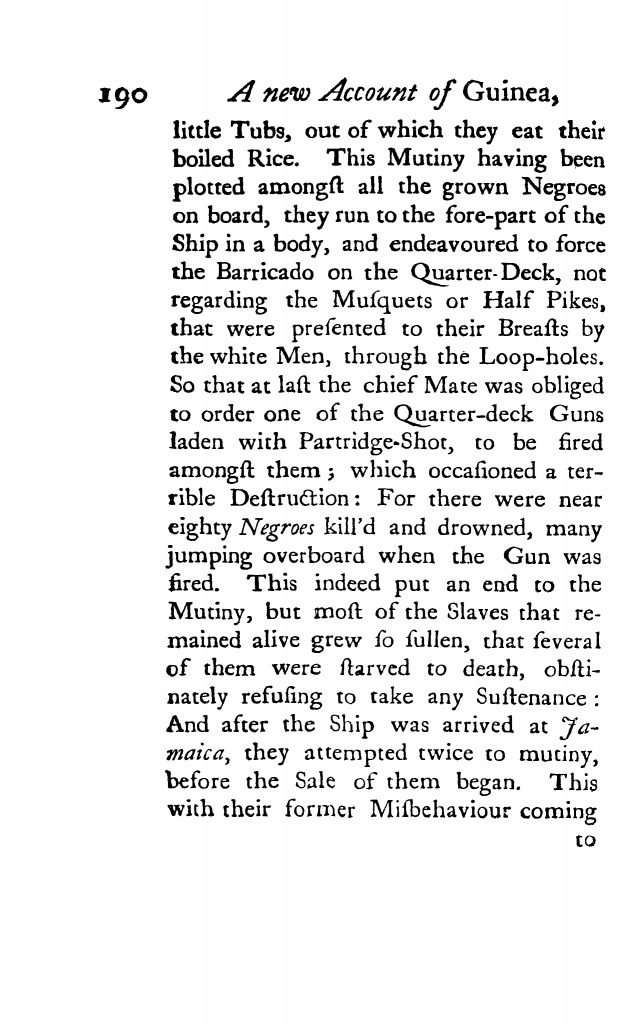 A new account of some parts of Guinea, and the slave-trade, Page 190

little Tubs, out of which they eat their boiled Rice. This Mutiny having been plotted amongst all the grown Negroes on board, they run to the fore-part of the Ship in a body, and endeavoured to force the Barricado on the Quarter-Deck, not regarding the Musquets or Half Pikes, that were presented to their Breasts by the white Men, through the Loop-holes. So that at last the chief Mate was obliged to order one of the Quarter-deck Guns laden with Partridge-Shot, to be fired amongst them; which occasioned a terrible Destruction: For there were near eighty Negroes kill’d and drowned, many jumping overboard when the Gun was fired. This indeed put an end to the Mutiny, but most of the Slaves that remained alive grew so sullen, that several of them were starved to death, obstinately refusing to take any Sustenance: And after the Ship was arrived at Jamaica, they attempted twice to mutiny, before the Sale of them began. This with their former Misbehaviour coming 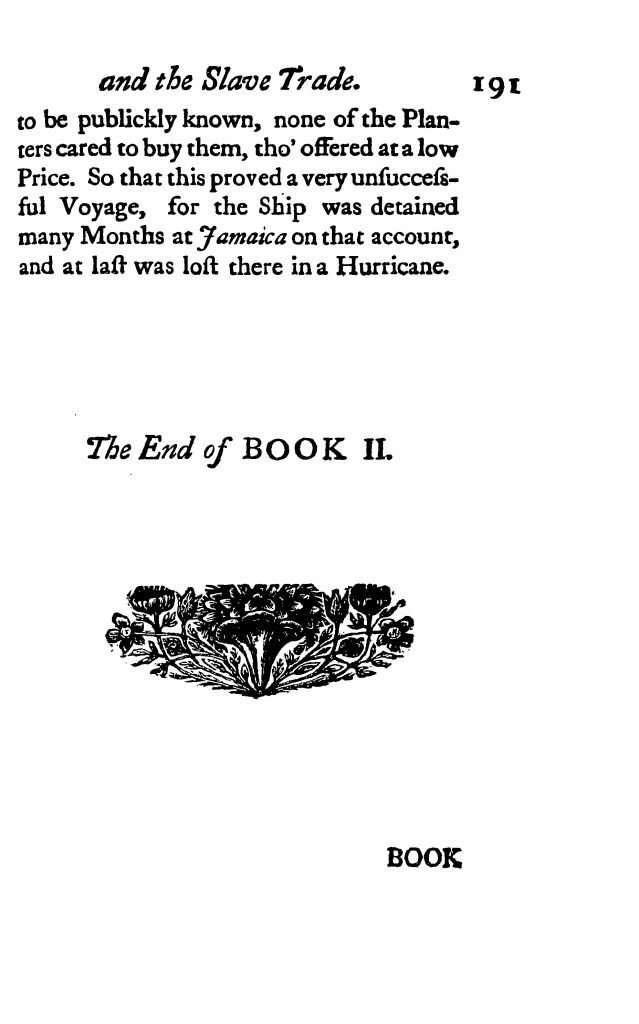 A new account of some parts of Guinea, and the slave-trade, Page 191

to be publickly known, none of the Planters cared to buy them, tho’ offered at a low Price. So that this proved a very unsuccessful Voyage, for the Ship was detained many Months at Jamaica on that account, and at last was lost there in a Hurricane.