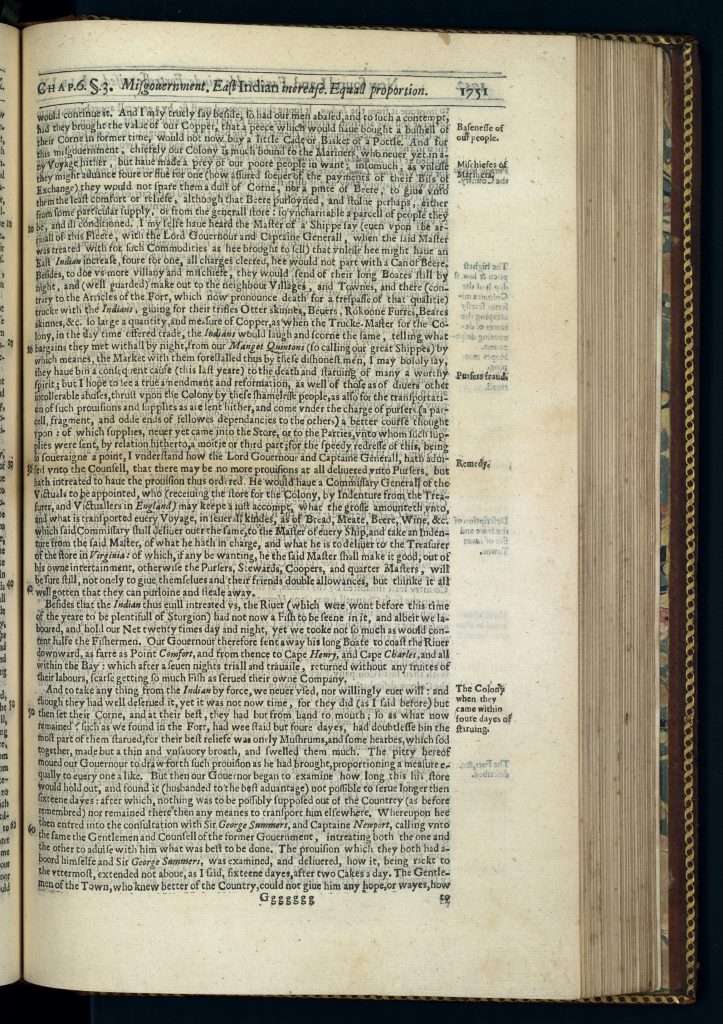 Quitting Virginia; an excerpt from A true reportory of the wracke, and redemption of Sir Thomas Gates Knight by William Strachey (1625), Page 1751

And to take any thing from the Indian by force, we never used, nor willingly ever will: and though they had well deserved it, yet it was not now time, for they did (as I said before) but then set their Corne, and at their best, they had but from hand to mouth; so as what now remained? such as we found in the Fort, had wee staid but foure dayes, had doubtlesse bin the most part of them starved, for their best reliefe was onely Mushrums, and some hearbes, which sod together, made but a thin and unsavory broath, and swelled them much. The pitty hereof moved our Governour to draw forth such provision as he had brought, proportioning a measure equally to every one a like. But then our Governor began to examine how long this his store would hold out, and found it (husbanded to the best advantage) not possible to serve longer then sixteene dayes: after which, nothing was to be possibly supposed out of the Countrey (as before remembred) nor remained there then any meanes to transport him elsewhere. Whereupon hee then entred into the consultation with Sir George Summers, and Captaine Newport, calling unto the same Gentlemen and Counsell of the former Government, intreating both the one and the other to advise with him what was best to be done. The provision which they both had aboord himselfe and Sir George Summers, was examined, and delivered, how it, being rackt to the uttermost, extended not above, as I said, sixteene dayes, after two Cakes a day. The Gentlmen of the Town, who knew better of the Country, could not give him any hope, or wayes, how 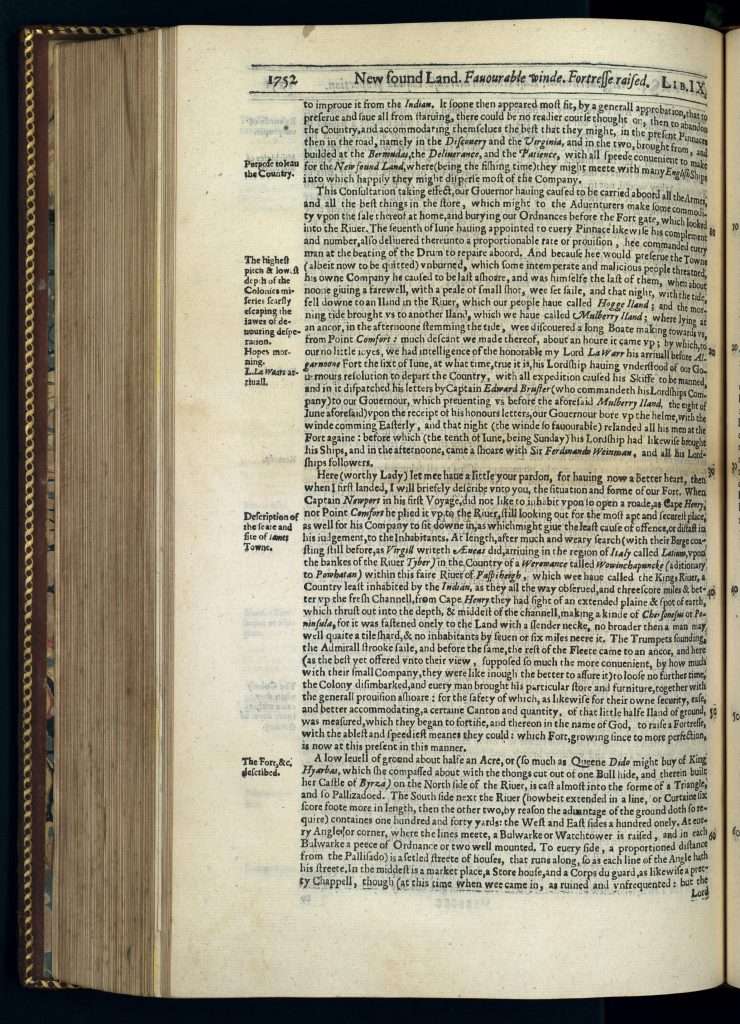 Quitting Virginia; an excerpt from A true reportory of the wracke, and redemption of Sir Thomas Gates Knight by William Strachey (1625), Page 1752

to improve it from the Indian. It soone then appeared most fit, by a generall approbation, that to preserve and save all from starving, there could be no readier course thought on, then to abandon the Country, and accommodating themselves the best that they might, in the present Pinnaces then in the road, namely in the Discovery and the Virginia, and in the two, brought from, and builded at the Bermudas, the Deliverance, and the Patience, with all speede convenient to make for the New found Land, where (being the fishing time) they might meete with many English Ships into which happily they might disperse most of the Company.

This Consultation taking effect, our Governor having caused to be carried aboord all the Armes, and all the best things in the store, which might to the Adventurers make some commodity upon the sale thereof at home, and burying our Ordnances before the Fort gate, which looked into the River. The seventh of June have appointed to every Pinnace likewise his complement and number, also delivered thereunto a proportionable rate of provision, hee commanded every man at the beating of the Drum to repaire aboord. And because hee would preserve the Towne (albeit now to be quitted) unburned, which some intemperate and malicious people threatned, his owne Company he caused to be last ashoare, and was himselfe the last of them, when about noone giving a farewell, with a peale of small shot, wee set saile, and that night, with the tide, fell downe to an Iland in the River, which our people have called Hogge Iland; and the morning tide brought us to another Iland, which we have called Mulberry Iland; where lying at an ancor, in the afternoone stemming the tide, wee discovered a long Boate making towards us, from Point Comfort: much descant we made thereof, about an houre it came up; by which, to our no little joyes, we had intelligence of the honorable my Lord La Warr his arrivall before Algarnoone Fort the sixt of June, at what time, true it is, his Lordship having understood of our Governours resolution to depart the Country, with all expedition caused his Skiffe to be manned, and in it dispatched his letters by Captain Edward Bruster (who commandeth his Lordships Company) to our Governour, which preventing us before the aforesaid Mulberry Iland, the eight of June aforesaid, upon the receipt of his honours letters, our Governour bore up the helme, with the winde comming Easterly, and that night (the winde so favourable) relanded all his men at the Fort againe: before which (the tenth of June, being Sunday) his Lordship had likewise brought his Ships, and in the afternoone, came a shoare with Sir Ferdinando Weinman, and all his Lordships followers.