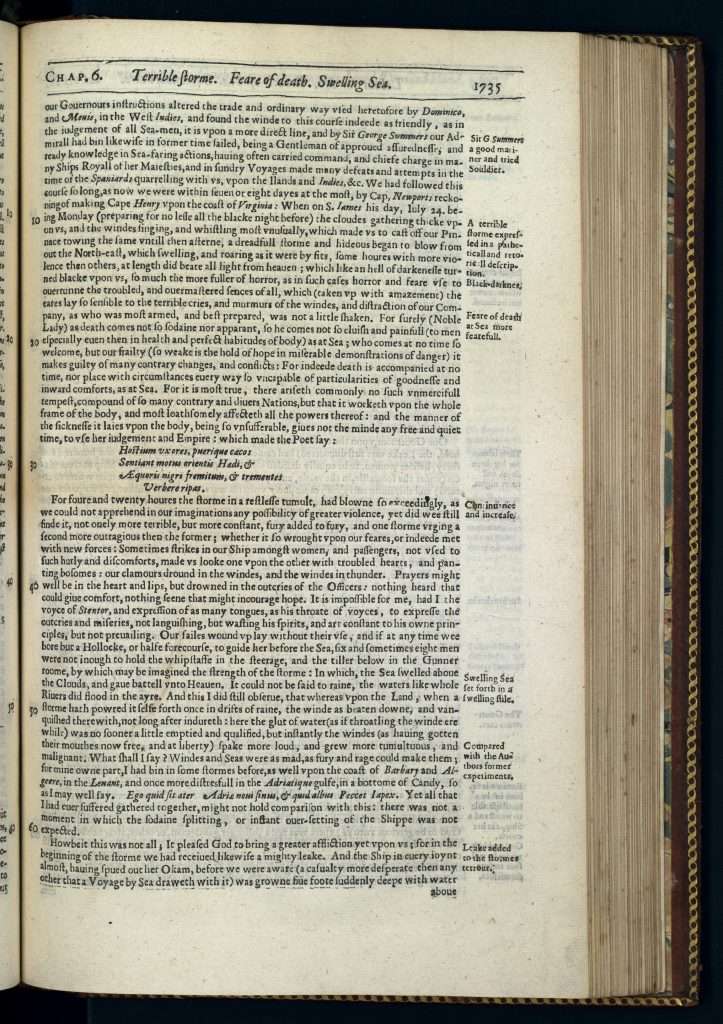 Fury Added to Fury; an excerpt from A true reportory of the wracke, and redemption of Sir Thomas Gates Knight by William Strachey (1625), Page 1735

For foure and twenty houres the storme in a restlesse tumult, had blowne so exceedingly, as we could not apprehend in our imaginations any possibility of greater violence, yet did wee still finde it, not onely more terrible, but more constant, fury added to fury, and one storme urging a second more outragious then the former; whether it so wrought upon our feares, or indeede met with new forces: Sometimes strikes in our Ship amongst women, and passengers, not used to such hurly and discomforts, made us looke one upon the other with troubled hearts, and panting bosomes: our clamours dround in the windes, and the windes in thunder. Prayers might well be in the heart and lips, but drowned in the outcries of the Officers: nothing heard that could give comfort, nothing seene that might incourage hope. It is impossible for me, had I the voyce of Stentor, and expression of as many tongues, as his throate of voyces, to expresse the outcries and miseries, not languishing, but wasting his spirits, and art constant to his owne principles, not prevailing. Our sailes wound up lay without their use, and if at any time wee bore but a Hollocke, or halfe forecourse, to guide her before the Sea, six and sometimes eight men were not inough to hold the whipstaffe in the steerage, and the tiller below in the Gunner roome, by which may be imagined the strength of the storme: In which, the Sea swelled above the Clouds, and gave battell unto Heaven. It could not be said to raine, the waters like whole Rivers did flood in the ayre. And this I did still observe, that whereas upon the Land, when a storme hath powred it selfe forth once in drifts of raine, the winde as beaten downe, and vanquished therewith, not long after indureth: here the glut of water (as if throatling the winde ere while) was no sooner a little emptied and qualified, but instantly the windes (as having gotten their mouthes now free, and at liberty) spake more loud, and grew more tumultuous, and malignant: What shall I say? Windes and Seas were as mad, as fury and rage could make them; for mine owne part, I had bin in some stormes before, as well upon the coast of Barbary and Algeere, in the Levant, and once more distresfull in the Adriatique gulfe, in a bottome of Candy, so as I may well say. Ego quid sit ater Adriæ novi sinus, & quid albus Peccet Iapex. Yet all that I had ever suffered gathered together, might not hold comparison with this: there was not a moment in which the sodaine splitting, or instant over-setting of the Shippe was not expected.

Howbeit this was not all; It pleased God to bring a greater affliction yet upon us; for in the beginning of the storme we had received likewise a mighty leake. And the Ship in every joynt almost, having spued out her Okam, before we were aware (a casualty more desperate then any other that a Voyage by Sea draweth with it) was growne five foote suddenly deepe with water 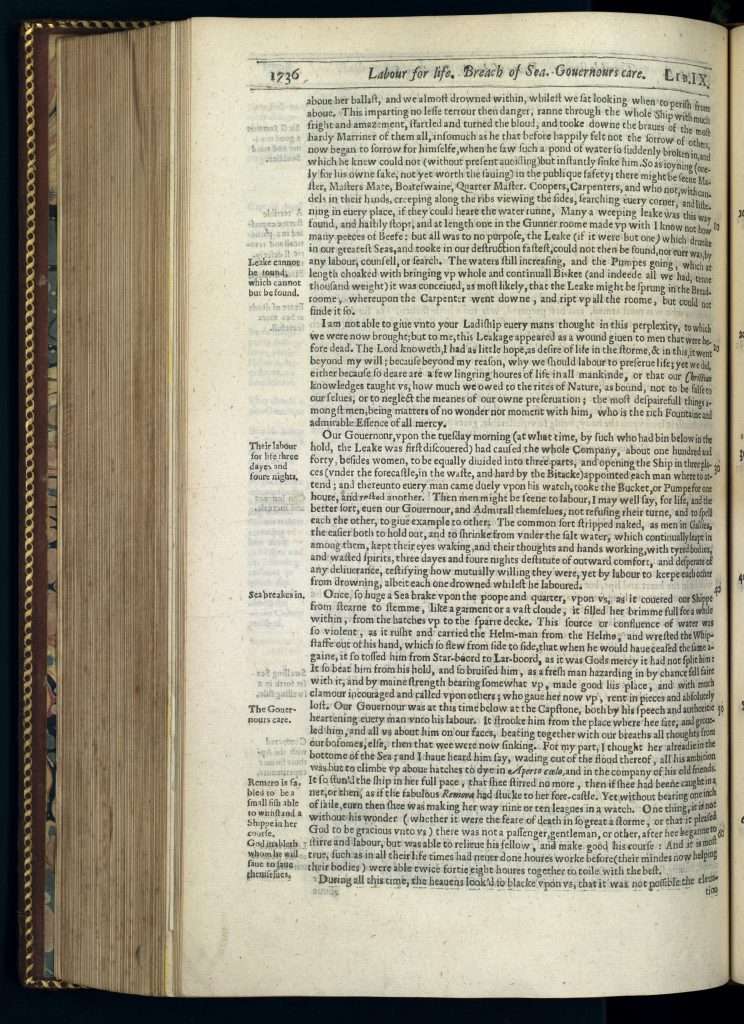 Fury Added to Fury; an excerpt from A true reportory of the wracke, and redemption of Sir Thomas Gates Knight by William Strachey (1625), Page 1736

above her ballast, and we almost drowned within, whilest we sat looking when to perish from above. This imparting no lesse terrour then danger, ranne through the whole Ship with much fright and amazement, startled and turned the bloud, and tooke downe the braves of the most hardy Marriner of them all, insomuch as he that before happily felt not the sorrow of others, now began to sorrow for himselfe, when he saw such a pond of water so suddenly broken in, and which he knew could not (without present avoiding) but instantly sinke him. So as joyning (onely for his owne sake, not yet worth the saving) in the publique safety; there might be seene Master, Masters Mate, Boateswaine, Quarter Master. Coopers, Carpenters, and who not, with candels in their hands, creeping along the ribs viewing the sides, searching every corner, and listening in every place, if they could heare the water runne, Many a weeping leake was this way found, and hastily stopt, and at length one in the Gunner roome made up with I know not how many peeces of Beefe: but all was to no purpose, the Leake (if it were but one) which drunke in our greatest Seas, and tooke in our destruction fastest, could not then be found, nor ever was, by any labour, counsell, or search. The waters still increasing, and the Pumpes going, which at length choaked with bringing up whole and continuall Bisket (and indeede all we had, tenne thousand weight) it was conceived, as most likely, that the Leake might be sprung in the Breadroome, whereupon the Carpenter went downe, and ript up all the roome, but could not finde it so.

I am not able to give unto your Ladiship every mans thought in this perplexity, to which we were now brought; but to me, this Leakage appeared as a wound given to men that were before dead. The Lord knoweth, I had as little hope, as desire of life in the storme, & in this, it went beyond my will; because beyond my reason, why we should labour to preserve life; yet we did, either because so deare are a few lingring houres of life in all mankinde, or that our Christian knowledges taught us, how much we owed to the rites of Nature, as bound, not to be false to our selves, or to neglect the meanes of our owne preservation; the most despairefull things amongst men, being matters of no wonder nor moment with him, who is the rich Fountaine and admirable Essence of all mercy.

Our Governour, upon the tuesday morning (at what time, by such who had bin below in the hold, the Leake was first discovered) had caused the whole Company, about one hundred and forty, besides women, to be equally divided into three parts, and opening the Ship in three places (under the forecastle, in the waste, and hard by the Bitacke) appointed each man where to attend; and thereunto every many came duely upon his watch, tooke the Bucket, or Pumpe for one houre, and rested another. Then men might be seene to labour, I may well say, for life, and the better sort, even our Governour, and Admirall themselves, not refusing their turne, and to spell each the other, to give example to other. The common sort stripped naked, as men in Gallies, the easier both to hold out, and to shrinke from under the salt water, which continually leapt in among them, kept their eyes waking, and their thoughts and hands working, with tyred bodies, and wasted spirits, three dayes and foure nights destitute of outward comfort, and desperate of any deliverance, testifying how mutually willing they were, yet by labour to keepe each other from drowning, albeit each one drowned whilest he laboured.

During all this time, the heavens look’d so blacke upon us, that it was not possible the ele- 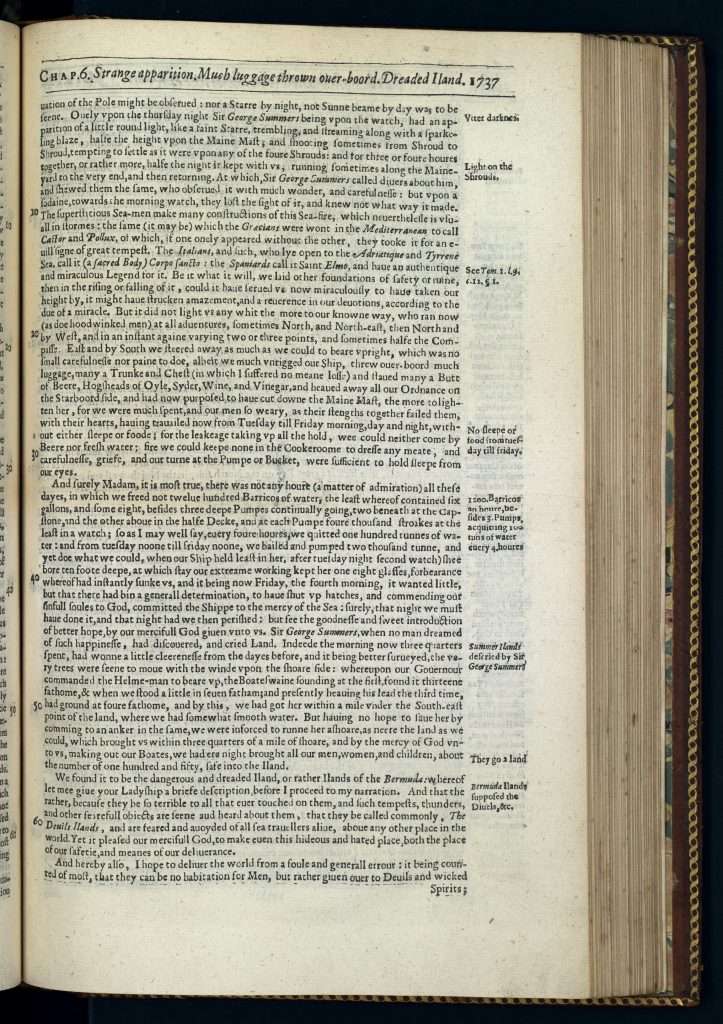 Fury Added to Fury; an excerpt from A true reportory of the wracke, and redemption of Sir Thomas Gates Knight by William Strachey (1625), Page 1737

vation of the Pole might be observed: nor a Starre by night, nor Sunne beame by day was to be seene. Onely upon the thursday night Sir George Summers being upon the watch, had an apparition of a little round light, like a faint Starre, trembling, and streaming along with a sparkeling blaze, halfe the height upon the Maine Mast, and shooting sometimes from Shroud to Shroud, tempting to settle as it were upon any of the foure Shrouds: and for three or foure houres together, or rather more, halfe the night it kept with us, running sometimes along the Maineyard to the very end, and then returning. At which, Sir George Summers called divers about him, and shewed them the same, who observed it with much wonder, and carefulnesse: but upon a sodaine, towards the morning watch, they lost sight of it, and knew not what way it made. The superstitious Sea-men make many constructions of this Sea-fire, which nevertheless is usuall in stormes […]

[…] and from tuesday noone till friday noone, we bailed and pumped two thousand tunne, and yet doe what we could, when our Ship held least in her, after tuesday night second watch, shee bore ten foote deepe, at which stay our extreame working kept her one eight glasses, forbearance whereof had instantly sunke us, and it being now Friday, the fourth morning, it wanted little, but that there had bin a generall determination, to have shut up hatches, and commending our sinfull soules to God, committed the Shippe to the mercy of the Sea: surely, that night we must have done it, and that night had we then perished: but see the goodnesse and sweet introduction of better hope, by our mercifull God given unto us. Sir George Summers, when no man dreamed of such happinesse, had discovered, and cried Land. Indeede the morning now three quarters spent, had wonne a little cleerenesse from the dayes before, and it being better surveyed, the vary trees were seene to move with the winde upon the shoare side: whereupon our Governour commanded the Helme-man to beare up, the Boateswaine sounding at the first, found it thirteene fathome, & when we stood a little in seven fatham; and presently heaving his lead the third time, had ground at foure fathome, and by this, we had got her within a mile under the South-east point of the land, where we had somewhat smooth water. But having no hope to save her by comming to an anker in the same, we were inforced to runne her ashoare, as neere the land as we could, which brought us within three quarters of a mile of shoare, and by the mercy of God unto us, making out our Boates, we had ere night brought all our men, women, and children, about the number of one hundred and fifty, safe into the Iland.