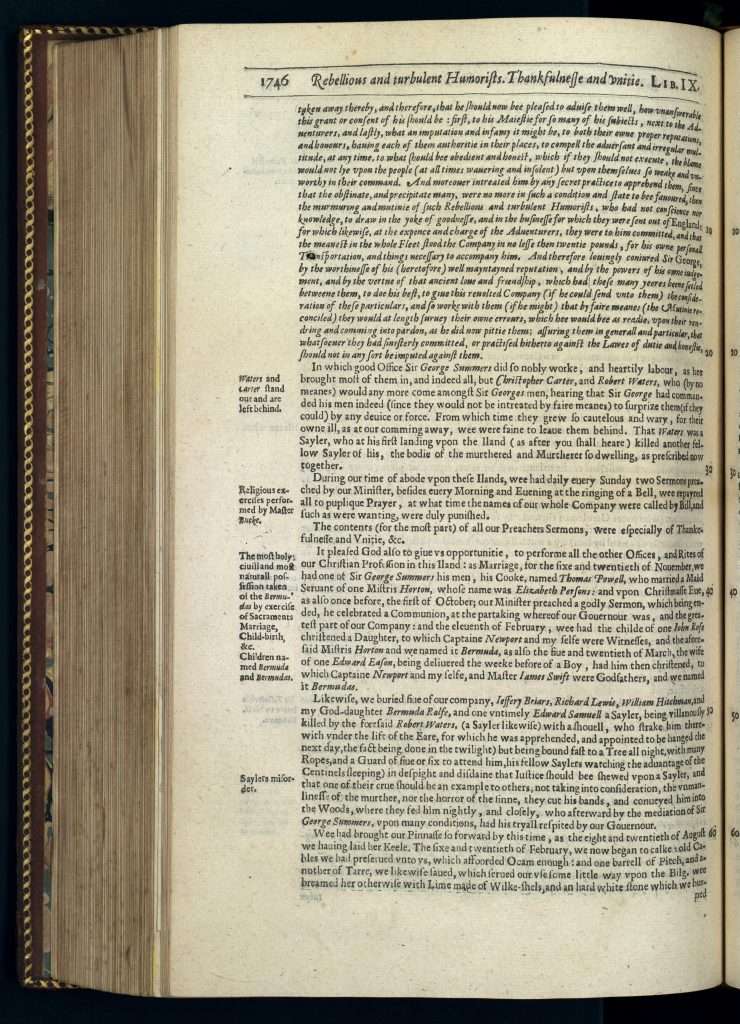 Life and Death on Bermuda; an excerpt from A true reportory of the wracke, and redemption of Sir Thomas Gates Knight by William Strachey (1625), Page 1746

During our time of abode upon these Ilands, wee had daily every Sunday two Sermons preached by our Minister, besides every Morning and Evening at the ringing of a Bell, wee repayred all to puplique Prayer, at what time the names of our whole Company were called by Bill, and such as were wanting, were duly punished.

The contents (for the most part) of all our Preachers Sermons, were especially of Thankefulnesse and Unitie, &c.

It pleased God also to give us opportunitie, to performe all the other Offices, and Rites of our Christian Profession in this Iland: as Marriage, for the sixe and twentieth of November, we had one of Sir George Summers his men, his Cooke, named Thomas Powell, who married a Maid Servant of one Mistris Horton, whose name was Elizabeth Persons: and upon Christmasse Eve, as also once before, the first of October; our Minister preached a godly Sermon, which being ended, he celebrated a Communion, at the partaking whereof our Governour was, and the greatest part of our Company: and the eleventh of February, wee had the childe of one John Rofe christened a Daughter, to which Captaine Newport and my selfe were Witnesses, and the aforesaid Mistris Horton and we named it Bermuda, as also the five and twentieth of March, the wife of one Edward Eason, being delivered the weeke before of a Boy, had him then christened, to which Captaine Newport and my selfe, and Master James Swift were Godfathers, and we named it Bermudas.

Likewise, we buried five of our company, Jeffery Briars, Richard Lewis, William Hitchman, and my God-daughter Bermuda Rolfe, and one untimely Edward Samuell a Sayler, being villanously killed by the foresaid Robert Waters, (a Sayler likewise) with a shovell, who strake him therewith under the lift of the Eare, for which he was apprehended, and appointed to be hanged the next day, the fact being done in the twilight (but being bound fast to a Tree all night, with many Ropes, and a Guard of five or six to attend him, his fellow Saylers watching the advantage of the Centinels sleeping) in despight and disdaine that Justice should bee shewed upon a Sayler, and that one of their crue should be an example to others, not taking into consideration, the unmanlinesse of murther, nor the horror of the sinne, they cut his bands, and conveyed him into the Woods, where they fed him nightly, and closely, who afterward by the mediation of Sir George Summers, upon many conditions, had his tryall respited by our Governour.