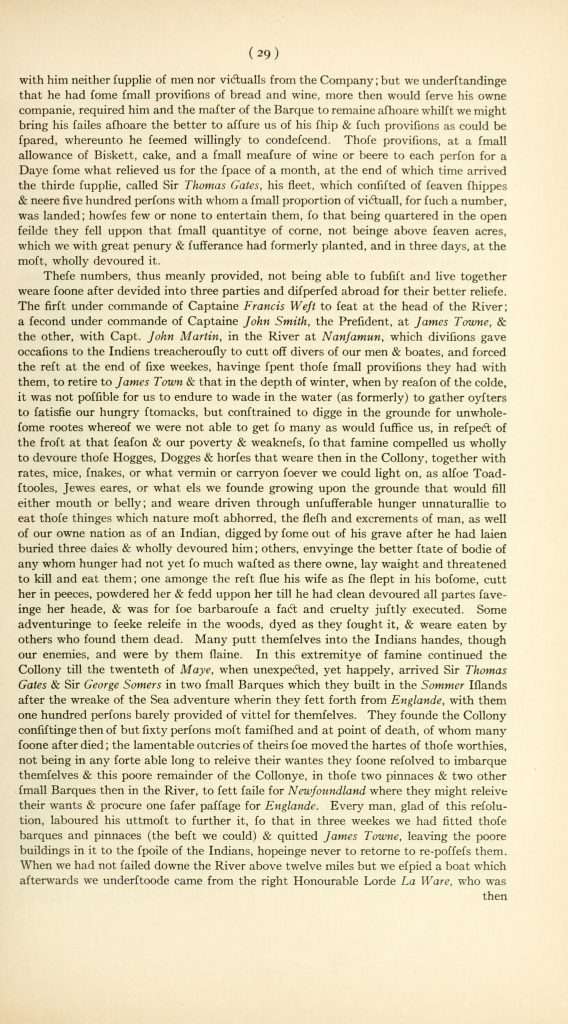 These numbers, thus meanly provided, not being able to subsist and live together weare soone after devided into three parties and dispersed abroad for their better reliefe. The first under commande of Captaine Francis West to seat at the head of the River; a secund under commande of Captaine John Smith, the President, at James Towne, & the other, with Capt. John Martin, in the River at Nansamun, which divisions gave occasions to the Indiens treacherously to cut off divers of our men & boates, and forced the rest at the end of sixe weekes, having spent those small provisions they had with them, to retire to James Town & that in the depth of winter, when by reason of the colde, it was not possible for us to endure to wade in the water (as formerly) to gather oysters to satisfie our hungry stomacks, but constrained to digge in the grounde for unwholesome rootes whereof we were not able to get fo many as would suffice us, in respect of the frost at that season & our poverty & weakness, so that famine compelled us wholly to devoure those Hogges, Dogges & horses that weare then in the Collony, together with rates, mice, snakes, or what vermin or carryon soever we could light on, as alsoe Toadstooles, Jewes eares, or what els we founde growing upon the grounde that would fill either mouth or belly; and weare driven through unsufferable hunger unnaturallie to eat those thinges which nature most abhorred, the flesh and excrements of man, as well of our owne nation as of an Indian, digged by some out of his grave after he had laien buried three daies & wholly devoured him; others, envyinge the better state of bodie of any whom hunger had not yet so much wafted as there owne, lay waight and threatened to kill and eat them; one amonge the rest slue his wife as she slept in his bosome, cut her in peeces, powdered her & fedd uppon her till he had clean devoured all partes saveinge her heade, & was for soe barbarouse a fact and cruelty justly executed. Some adventuringe to seeke releife in the woods, dyed as they fought it, & weare eaten by others who found them dead. Many putt themselves into the Indians hands, though our enemies, and were by them slaine. In this extremitye of famine continued the Collony till the twenteth of Maye, when unexpected, yet happely, arrived Sir Thomas Gates & Sir George Somers in two small Barques which they built in the Sommer Islands after the wreake of the Sea adventure wherein they sett forth from Englande, with them one hundred persons barely provided of vittel for themselves. They founde the Collony consistinge then of but sixty persons most famished and at point of death, of whom many soone after died; the lamentable outcries of theirs soe moved the hartes of those worthies, not being in any forte able long to relieve their wante they soone resolved to imbarque themselves & this poore remainder of the Collonye, in those two pinnaces & two other small Barques then in the River, to sett saile for Newfoundland where they might releive their wants & procure one safer passage for Englande. Every man, glad of this resolution, labored his uttmost to further it, so that in three weekes we had fitted those barques and pinnaces (the best we could) & quitted James Towne, leaving the poore buildings in it to the spoile of the Indians, hopeinge never to retorne to re-possess them. When we had not sailed downe the River above twelve miles but we espied a boat which afterwards we understoode came from the right Honourable Lorde La Ware, who was 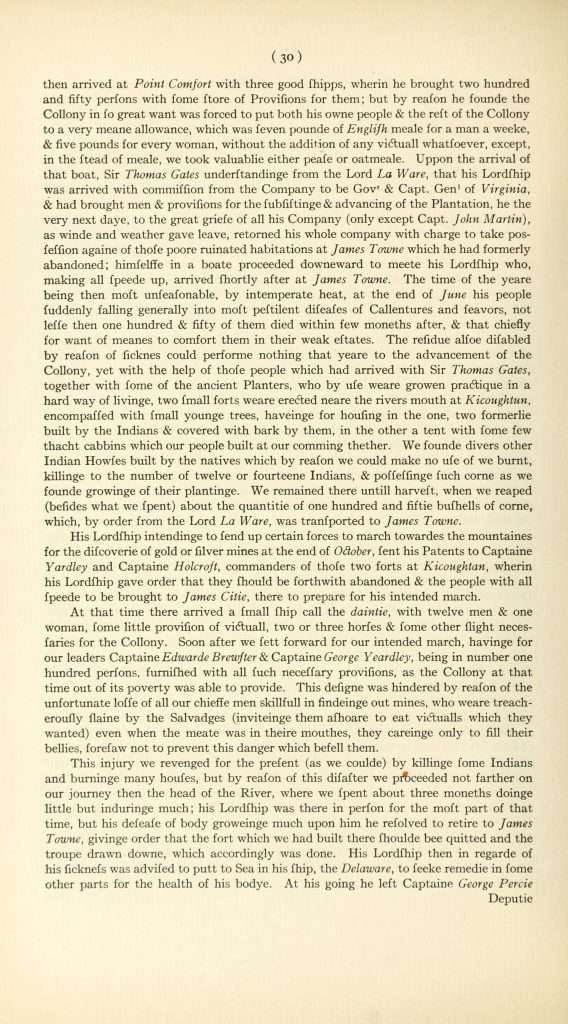 then arrived at Point Comfort with three good shipps, wherein he brought two hundred and fifty persons with some store of Provisions for them; but by reason he founde the Collony in so great want was forced to put both his owne people & the rest of the Collony to a very meane allowance, which was seven pounde of English meale for a man a weeke, & five pounds for every woman, without the addition of any victual whatsoever, except, in the stead of meale, we took valuablie either pease or oatmeal.