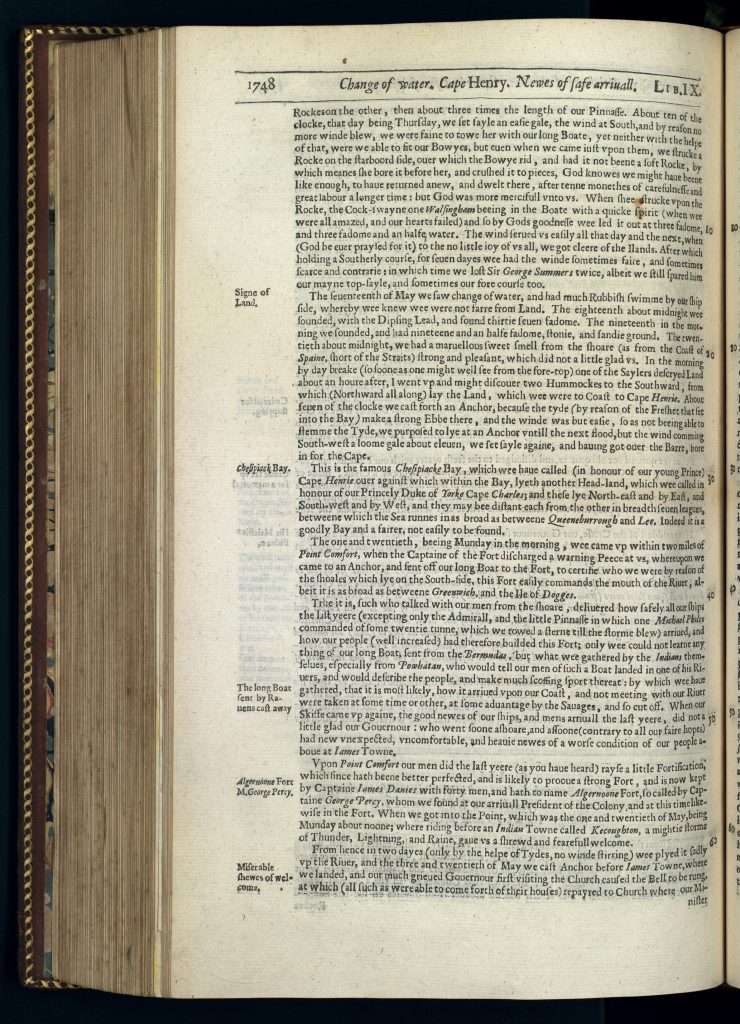 Misery and misgovernment; an excerpt from A true reportory of the wracke, and redemption of Sir Thomas Gates Knight by William Strachey (1625), Page 1748

[…] When our Skiffe came up againe, the good newes of our ships, and mens arrivall the last yeere, did not a little glad our Governour: who went soone ashoare, and assoone (contrary to all our faire hopes) had new unexpected, uncomfortable, and heavie newes of a worse condition of our people above at James Towne.

Upon Point Comfort our men did the last yeere (as you have heard) rayse a little Fortification, which since hath beene better perfected, and is likely to proove a strong Fort, and is now kept by Captaine James Davies with forty men, and hath to name Algernoone Fort, so called by Captaine George Percy, whom we found at our arrivall President of the Colony and at this time likewise in the Fort. When we got into the Point, which was the one and twentieth of May, being Munday about noone; where riding before an Indian Towne called Kecoughton, a mightie storme of Thunder, Lightning, and Raine, gave us a shrewd and fearefull welcome.

From hence in two dayes (only by the helpe of Tydes, no winde stirring) wee plyed it sadly up the River, and the three and twentieth of May we cast Anchor before James Towne, where we landed, and our much grieved Governour first visiting the Church caused the Bell to be rung, at which (all such as were able to come forth of their houses) repayred to Church where our Mi- 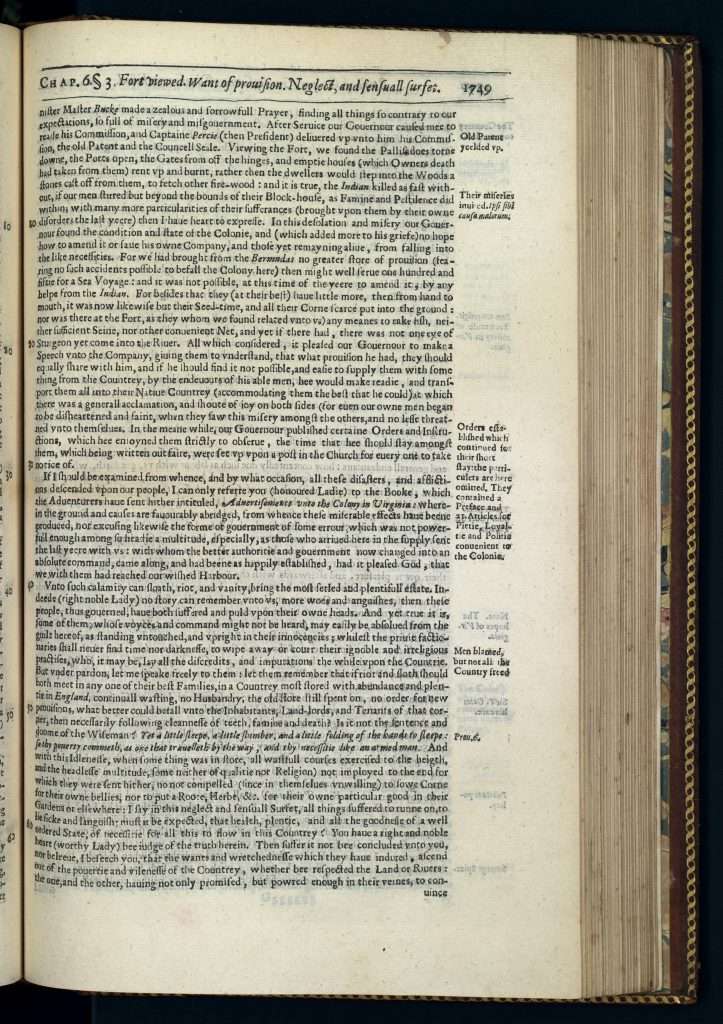 Misery and misgovernment; an excerpt from A true reportory of the wracke, and redemption of Sir Thomas Gates Knight by William Strachey (1625), Page 1749

nister Master Bucke made a zealous and sorrowfull Prayer, finding all things so contrary to our expectations, so full of misery and misgovernment. After Service our Governour caused mee to reade his Commission, and Captaine Percie (then President) delivered up unto him his Commission, the old Patent and the Councell Seale. Viewing the Fort, we found the Pallisadoes torne downe, the Ports open, the Gates from off the hinges, and emptie houses (which Owners death had taken from them) rent up and burnt, rather then the dwellers would step into the Woods a stones cast off from them, to fetch other fire-wood: and it is true, the Indian killed as fast without, if our men stirred but beyond the bounds of their Block-house, as Famine and Pestilence did within; with many more particularities of the sufferances (brought upon them by their owne disorders the last yeere) then I have the heart to expresse. In this desolation and misery our Governour found the condition and state of the Colonie, and (which added more to his griefe) no hope how to amend it or save his owne Company, and those yet remayning alive, from falling into the like necessities. For we had brought from the Bermudas no greater store of provision (fearing no such accidents possible to befall the Colony here) then might well serve one hundred and fiftie for a Sea Voyage: and it was not possible, at this time of the yeere to amend it, by any helpe from the Indian. For besides that they (at their best) have little more, then from hand to mouth, it was now likewise but their Seed-time, and all their Corne scarce put into the ground: nor was there at the Fort, as they whom we found related unto us, any meanes to take fish, neither sufficient Seine, nor other convenient Net, and yet if there had, there was not one eye of Sturgeon yet come into the River. All which considered, it pleased our Governour to make a Speech unto the Company, giving them to understand, that what provision he had, they should equally share with him, and if he should find it not possible, and easie to supply them with some thing from the Countrey, by the endevours of his able men, hee would make readie, and transport them all into their Native Countrey (accommodating them the best that he could) at which there was a generall acclamation, and shoute of joy on both sides (for even our owne men began to be disheartened and faint, when they saw this misery amongst the others, and no lesse threatned unto themselves.) In the meane while, our Governour published certaine Orders and Instructions, which hee enjoyned them strictly to observe, the time that hee should stay amongst them, which being written out faire, were set up upon a post in the Church for everyone to take notice of.

If I should be examined from whence, and by what occasion, all these disasters, and afflictions descended upon our people, I can only referre you (honoured Ladie) to the Booke, which the Adventurers have sent hither intituled, Advertisements unto the Colony in Virginia: wherein the ground and causes are favourably abridged, from whence these miserable effects have beene produced, not excusing likewise the forme of government of some errour, which was not powerfull enough among so headie a multitude, especially, as those who arrived here in the supply sent the last yeere with us: with whom the better authoritie and government now changed into an absolute command, came along, and had beene as happily established, had it pleased God, that we with them had reached our wished Harbour.

Unto such calamity can sloath, riot, and vanity, bring the most setled and plentifull estate. Indeede (right noble Lady) no story can remember unto us, more woes and anguishes, then these people, thus governed, have both suffered and puld upon their owne heads. And yet true it is, some of them, whose voyces and command might not be heard, may easily be absolved from the guilt hereof, as standing untouched, and upright in their innocencies; whilest the privie factionaries shall never find time nor darknesse, to wipe away or cover their ignoble and irreligious practises, who, it may be, lay all the discredits, and imputations the while upon the Countrie. But under pardon, let me speake freely to them: let them remember that if riot and sloth should both meet in any one of their best Families, in a Countrey most stored with abundance and plentie in England; continuall wasting, no Husbandry, the old store still spent on, no order for new provisions, what better could befall unto the Inhabitants, Land-lords, and Tenants of that corner, then necessarily following cleannesse of teeth, famine, and death? Is it not the sentence and doome of the Wiseman? Yet a little sleepe, a little slumber, and a little folding of the hands to sleepe: so thy poverty commeth, as one that travelleth by the way, and thy necessitie like an armed man. And with this Idlenesse, when some thing was in store, all wastfull courses exercised to the heigth, and the headlesse multitude, some neither of qualitie nor Religion, not imployed to the end for which they were sent hither, no not compelled (since in themselves unwilling) to sowe Corne for their owne bellies, nor to put a Roote, Herbe, &c. for their owne particular good in their Gardens or elsewhere: I say in this neglect and sensuall Surfet, all things suffered to runne on, to lie sicke and languish; must it be expected, that health, plentie, and all the goodnesse of a well ordered State, of necessitie for all this to flow in this Countrey? You have a right and noble heart (worthy Lady) bee judge of the truth herein […]