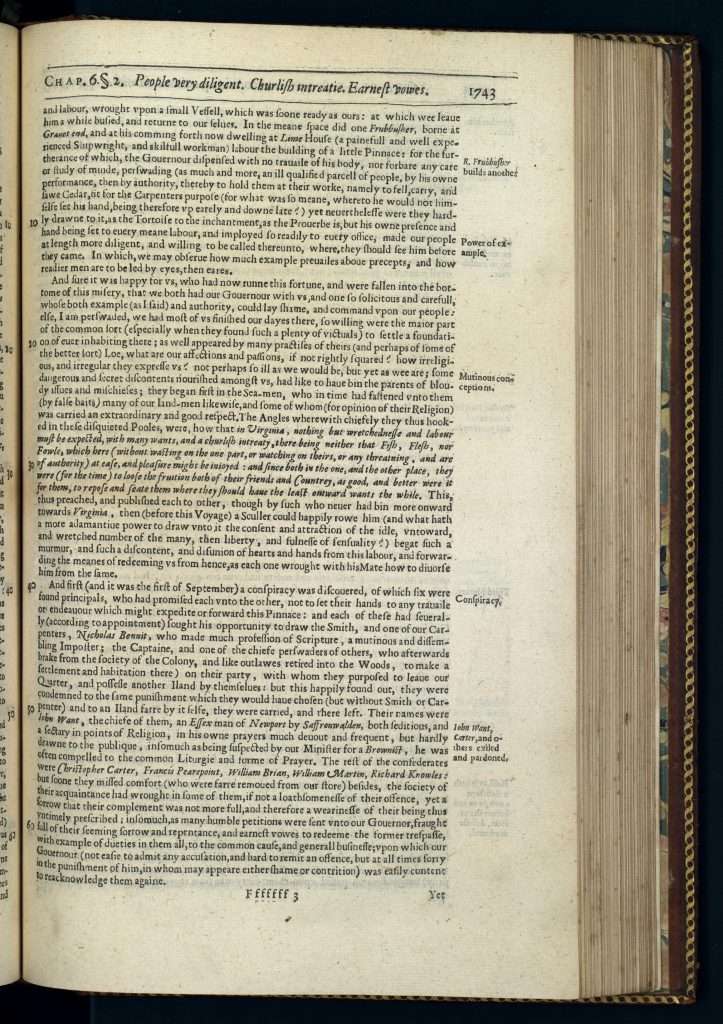 Conspiracies on Bermuda; an excerpt from A true reportory of the wracke, and redemption of Sir Thomas Gates Knight by William Strachey (1625), Page 1743

And first (and it was the first of September) a conspiracy was discovered, of which six were found principals, who had promised each unto the other, not to set their hands to any travaile or endeavour which might expedite or forward this Pinnace: and each of these had severally (according to appointment) sought his opportunity to draw the Smith, and one of our Carpenters, Nicholas Bennit, who made much profession of Scripture, a mutinous and dissembling Imposter; the Captaine, and one of the chiefe perswaders of others, who afterwards brake from the society of the Colony, and like outlawes retired into the Woods, to make a settlement and habitation there on their party, with whom they purposed to leave our Quarter, and possesse another Iland by themselves: but this happily found out, they were condemned to the same punishment which they would have chosen (but without Smith or Carpenter) and to an Iland farre by it selfe, they were carried, and there left. Their names were John Want, the chiefe of them, an Essex man of Newport by Saffronwalden, both seditious, and a sectary in points of Religion, in his owne prayers much devout and frequent, but hardly drawne to the publique, insomuch as being suspected by our Minister for a Brownist, he was often compelled to the common Liturgie and forme of Prayer. The rest of the confederates were Christopher Carter, Francis Pearepoint, William Brian, William Martin, Richard Knowles: but soone they missed comfort (who were farre removed from our store) besides, the society of their acquaintance had wrought in some of them, if not a loathsomenesse of their offence, yet a sorrow that their complement was not more full, and therefore a wearinesse of their being thus untimely prescribed; insomuch, as many humble petitions were sent unto our Governour, fraught full of their seeming sorrow and repentance, and earnest vowes to redeeme the former trespasse, with example of dueties in them all, to the common cause, and generall businesse; upon which our Governour (not easie to admit any accusation, and hard to remit an offence, but at all times sorry in the punishment of him, in whom may appeare either shame or contrition) was easily content to reacknowledge them againe. 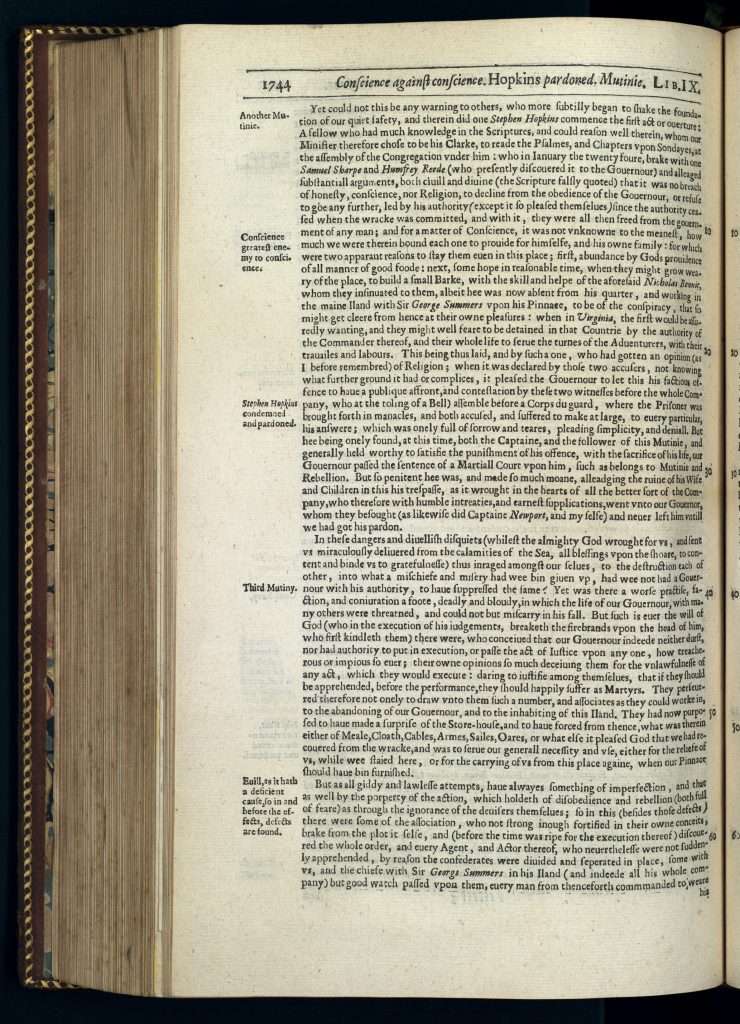 Conspiracies on Bermuda; an excerpt from A true reportory of the wracke, and redemption of Sir Thomas Gates Knight by William Strachey (1625), Page 1744

Yet could not this be any warning to others, who more subtilly began to shake the foundation of our quiet safety, and therein did one Stephen Hopkins commence the first act or overture: A fellow who had much knowledge in the Scriptures, and could reason well therein, whom our Minister therefore chose to be his Clarke, to reade the Psalmes, and Chapters upon Sondayes, at the assembly of the Congregation under him: who in January the twenty foure, brake with one Samuel Sharpe and Humfrey Reede (who presently discovered it to the Governour) and alleaged substantiall arguments, both civill and divine (the Scripture falsly quoted) that it was no breach of honestly, conscience, nor Religion, to decline from the obedience of the Governour, or refuse to goe any further, led by his authority (except it so pleased themselves) since the authority ceased when the wracke was committed, and with it, they were all then freed from the government of any man; and for a matter of Conscience, it was not unknowne to the meanest, how much we were therin bound each one to provide for himselfe, and his owne family: for which were two apparent reasons to stay them even in this place; first, abundance by Gods providence of all manner of good foode: next, some hope in reasonable time, when they might grow weary of the place, to build a small Barke, with the skill and helpe of the aforesaid Nicholas Bennit, whom they insinuated to them, albeit hee was now absent from his quarter, and working in the maine Iland with Sir George Summers upon his Pinnace, to be of the conspiracy, that so might get cleere from hence at their owne pleasures: when in Virginia, the first would be assuredly wanting, and they might well feare to be detained in that Countrie by the authority of the Commander thereof, and their whole life to serve the turnes of the Adventurers, with their travailes and labours. This being thus laid, and by such a one, who had gotten an opinion (as I before remembred) of Religion; when it was declared by those two accusers, not knowing what further ground it had or complices, it pleased the Governour to let this factious offence to have a publique affront, and contestation by these two witnesses before the whole Company, who at the toling of a Bell) assemble before a Corps du guard, where the Prisoner was brought forth in manacles, and both accused, and suffered to make at large, to every particular, his answere; which was onely full of sorrow and teares, pleading simplicity, and deniall. But hee being onely found, at this time, both the Captaine, and the follower of this Mutinie, and generally held worthy to satisfie the punishment of his offence, with the sacrifice of his life, our Governour passed the sentence of a Martiall Court upon him, such as belongs to Mutinie and Rebellion. But so penitent hee was, and made so much moane, alleadging the ruine of his Wife and Children in this his trespasse, as it wrought in the hearts of all the better sort of the Company, who therefore with humble intreaties, and earnest supplications, went unto our Governor, whom they besought (as likewise did Captaine Newport, and my selfe) and never left him untill we had got his pardon.

In these dangers and divellish disquiets (whilest the almighty God wrought for us, and sent us miraculously delivered from the calamities of the Sea, all bessings upon the shoare, to content and binde us to gratefulnesse) thus inraged amongst our selves, to the destruction each of other, into what a mischiefe and misery had wee bin given up, had wee not had a Governour with his authority, to have suppressed the same? Yet was there a worse practise, faction, and conjuration a foote, deadly and bloudy, in which the life of our Governour, with many others were threatned, and could not but miscarry in his fall. But such is ever the will of God (who in the execution of his judgements, breaketh the firebrands upon the head of him, who first kindleth them) there were, who conceived that our Governour indeede neither durst, nor had authority to put in execution, or passe the act of Justice upon any one, how treacherous or impious so ever; their owne opinions so much deceiving them for the unlawfulnesse of any act, which they would execute: daring to justifie among themselves, that if they should be apprehended, before the performance, they should happily suffer as Martyrs. They persevered therefore not onely to draw unto them such a number, and associates as they could worke in, to the abandoning of our Governour, and to the inhabiting of this Iland. They had now purposed to have made a surprise of the Store-house, and to have forced from thence, what was therein either of Meale, Cloath, Cables, Armes, Sailes, Oares, or what else it pleased God that we had recovered from the wracke, and was to serve our generall necessity and use, either for the reliefe of us, while wee staied here, or for the carrying of us from the place againe, when our Pinnace should have bin furnished.

But as all giddy and lawlesse attempts, have alwayes something of imperfection, and that as well by the porperty of the action, which holdeth of disobedience and rebellion (both full of feare) as through the ignorance of the devisers themselves; so in this (besides those defects) there were some of the association, who not strong inough fortified in their owne conceits, brake from the plot it selfe, and (before the time was ripe for the execution thereof) discovered the whole order, and every Agent, and Actor thereof, who neverthelesse were not suddenly apprehended, by reason the confederates were divided and seperated in place, some with us, and the chiefe with Sir Georgs Summers in his Iland (and indeede all his whole company) but good watch passed upon them, every man from thenceforth commanded to weare 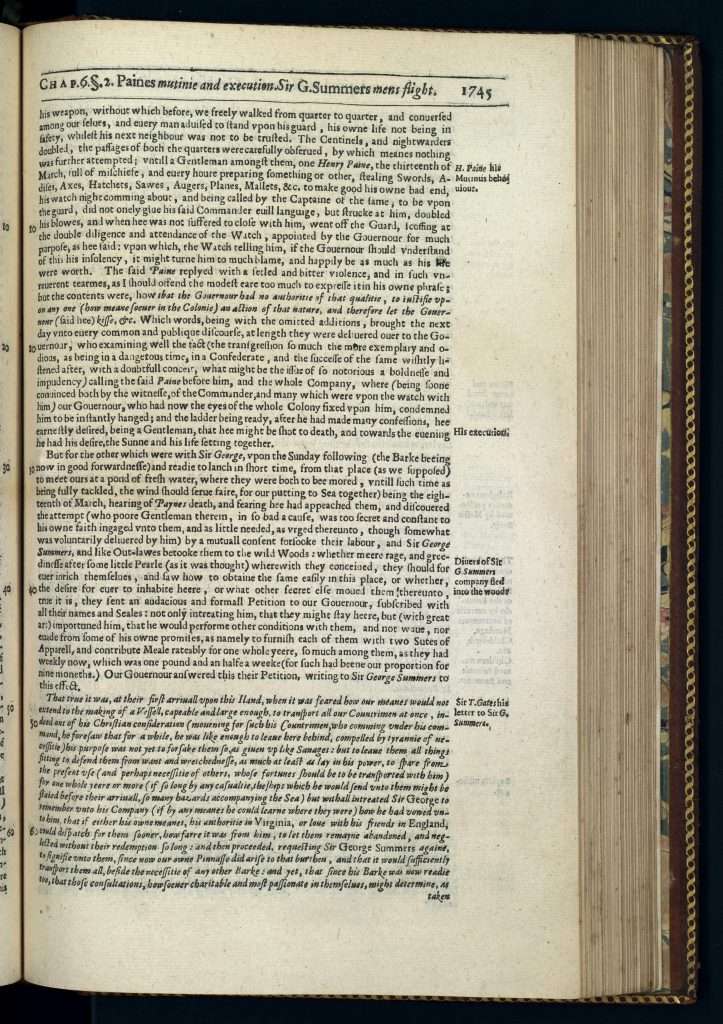 Conspiracies on Bermuda; an excerpt from A true reportory of the wracke, and redemption of Sir Thomas Gates Knight by William Strachey (1625), Page 1745

his weapon, without which before, we freely walked from quarter to quarter, and conversed among our selves, and every man advised to stand upon his guard, his owne life not being in safety, whilest his next neighbour was not to be trusted. The Centinels, and nightwarders doubled, the passages of both quarters were carefully observed, by which meanes nothing was further attempted; untill a Gentleman amongst them, one Henry Paine, the thirteenth of March, full of mischiefe, and ever houre preparing something or other, stealing Swords, Adises, Axes, Hatchets, Sawes, Augers, Planes, Mallets, &c. to make good his owne bad end, his watch night comming about, and being called by the Captaine of the same, to be upon the guard, did not onely give his said Commander evill language, but strucke at him, doubled his blowes, and when hee was not suffered to close with him, went off the Guard, scoffing at the double diligence and attendance of the Watch, appointed by the Governour for much purpose, as he said: upon which, the Watch telling him, if the Governour should understand of this his insolency, it might turne him to much blame, and happily be as much as his life were worth. The said Paine replyed with a setled and bitter violence, and in such unreverent tearmes, as I should offend the modest eare too much to express it in his owne phrase, but the contents were, how that the Governour had no authoritie of that qualitie, to justifie upon any one (how meane soever in the Colonie) an action of that nature, and therefore let the Governour (said hee) kisse, &c. Which words, being with the omitted additions, brought the next day unto every common and publique discourse, at length they were delivered over to the Governour, who examining well the fact (the transgression so much the more exemplary and odious, as being a dangerous time, in a Confederate, and the successe of the same wishtly listened after, with a doubtfull conceit, what might be the issue of so notorious a boldnesse and impudency) calling the said Paine before him, and the whole Company, where (being soone convinced both by the witnesse, of the Commander, and many which were upon the watch with him) our Governour, who had now the eyes of the whole Colony fixed upon him, condemned him to be instantly hanged; and the ladder being ready, after he had made many confessions, hee earnestly desired, being a Gentleman, that hee might be shot to death, and towards the evening he had his desire, the Sunne and his life setting together.