Sea Venture when it encountered a hurricane and washed ashore in Bermuda. After spending ten months on the islands, the crew and passengers built two new boats, the Patience and Deliverance, and arrived in Virginia on May 21, 1610.

At Jamestown they discovered a colony nearly destroyed by the Starving Time and violence with the Indians of Tsenacomoco. In an attempt at instilling military discipline, Gates immediately issued the first of a set of regulations known as the Lawes Divine, Morall and Martiall . A few weeks later the new governor, Thomas West, twelfth baron De La Warr, arrived and confirmed martial law. In the meantime, Gates appointed Yeardley captain of the guard and, in 1611, promoted him to lieutenant. Two years later, when Sir Thomas Dale founded the plantation Bermuda Hundred, Yeardley served as his second in command there. 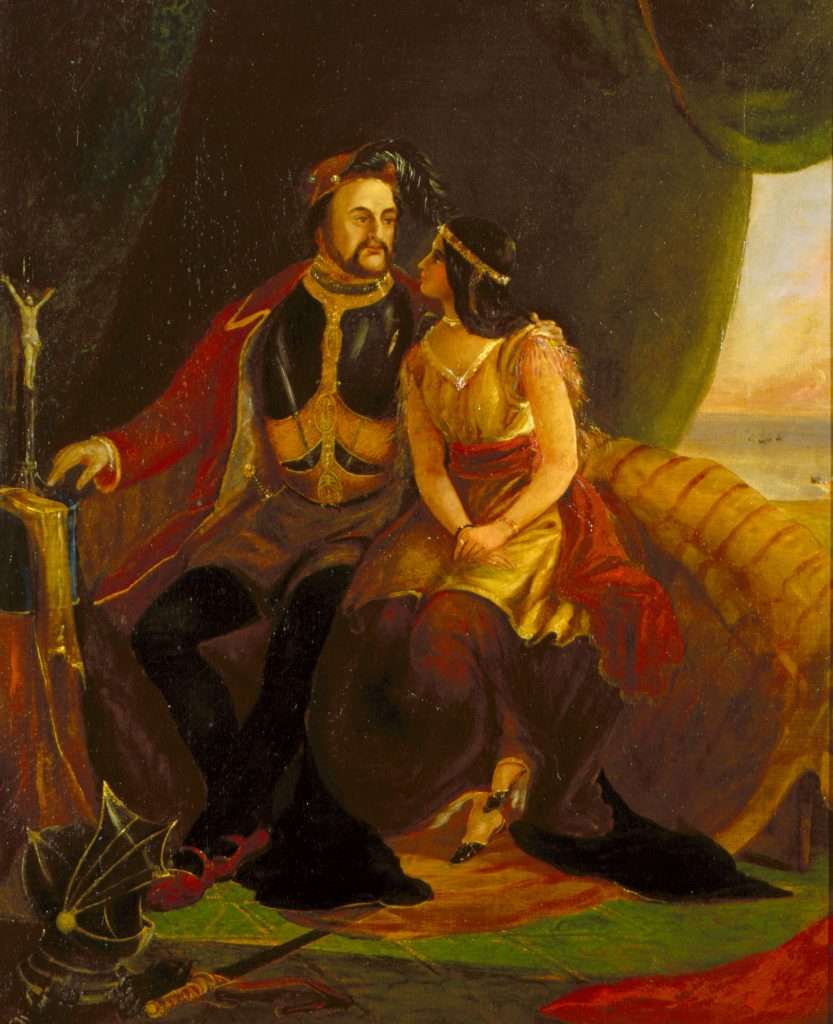 On April 19, 1616, after Dale, then the acting governor, departed to escort Pocahontas and John Rolfe to London, Yeardley became deputy governor. He served until May 15, 1617, and the arrival of De La Warr’s new deputy, Samuel Argall. During this time, the Pamunkey leader Opechancanough convinced the independent Chickahominy Indians, who had made a treaty years earlier with Dale, that his absence nullified any agreements. Yeardley confronted the Chickahominy and insisted that the treaty had been with the English colony, not simply Dale. Although the Indians appeased Yeardley in the short term, they soon joined the paramount chiefdom of Tsenacomoco.

Yeardley returned to England in mid- to late 1617, and on October 18, 1618, married Temperance Flowerdew. They had two sons and a daughter, all of whom were born later in Virginia. Flowerdew herself was a veteran of the colony, having sailed in the same fleet as the Sea Venture but on the Faulcon, a ship that had missed the hurricane and arrived safely in Jamestown. It’s not clear whether Flowerdew, who may have been married in 1609, remained in the colony during the Starving Time.

On November 18, 1618, the Virginia Company of London appointed Yeardley the colony’s governor and presented him with a detailed set of instructions. Often referred to as the Great Charter, the document articulated a number of important reforms. It established the headright system, which promised fifty acres of land for each person who paid his or her own passage or any other person’s passage to Virginia. It used land to defray the cost of funding the government by granting its officers land and tenants, including slaves and indentured servants. It called for the founding of an Indian college. And in order to end martial law, it replaced the military government with a Crown-appointed governor and advisory council, while authorizing the governor to summon a General Assembly to legislate as appropriate.

A week after Yeardley’s appointment, on November 24, 1618, King James I knighted him at Newmarket, in Suffolk County, England. In a letter to Sir Dudley Carleton, dated November 28, John Chamberlain mocked Yeardley’s new honor, writing that it “hath set him up so high that he flaunts it up and down the streets in extraordinarie braverie with fowerteen or fifteen fayre liveries after him.” The tone reflected concerns within the Virginia Company, in particular that Yeardley would be too lenient with English and Indians alike. Sir Thomas Smythe, one of the company’s chief officers, was skeptical of his leadership in part because Yeardley had aligned himself with a faction led by Sir Edwin Sandys, which would seek alliance with the powerful Rich family and in a year’s time take control of the company.

The new governor embarked for Virginia aboard the George on January 19, 1619, arriving in Jamestown on April 18. 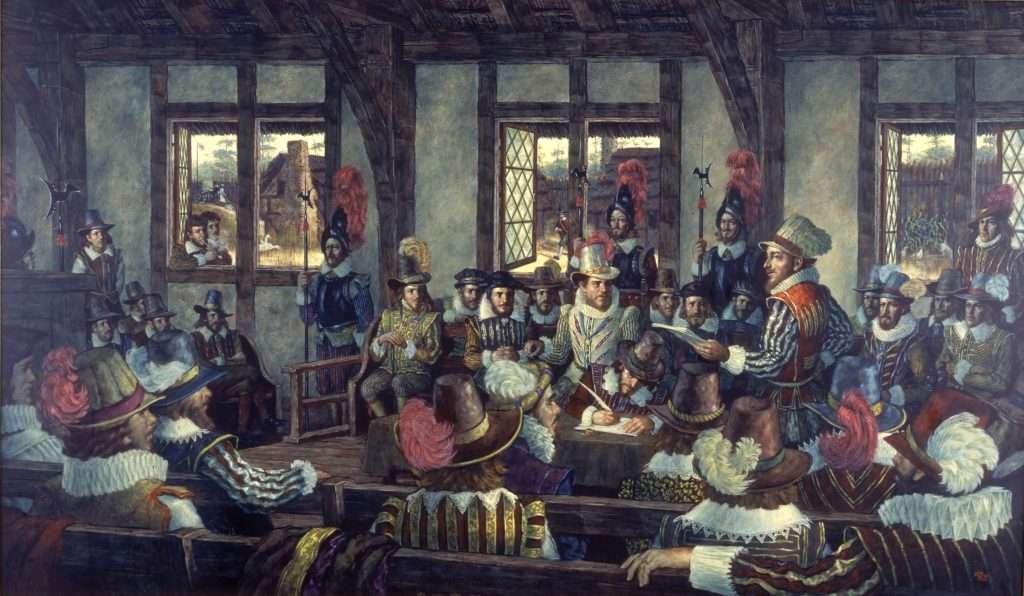 Yeardley immediately implemented the headright system and apportioned sections of land for various government officials, including 3,000 acres and 100 tenants for himself and future governors. He also called for the election of two burgesses from each of the colony’s eleven settlements. From July 30 to August 4, 1619, they met in unicameral session with Yeardley, the six-man governor’s Council, and the secretary and treasurer of the colony—the first representative assembly in British North America. Yeardley named Secretary John Pory, his wife’s first cousin, as the assembly’s Speaker.

Virginia’s government no longer operated by decree, and Yeardley found it difficult to overcome resistance to many of the company’s reforms. Planters were not anxious to diversify the economy, finding quick profit in tobacco; neither were they welcoming of better relations with the Indians of Tsenacomoco. Land was set aside for an Indian school on the north side of the James River, east of present-day Richmond, but it was not immediately built. George Thorpe, a member of the Council, wrote to Sandys in 1621 that he had planted vines at the college site but was having no luck with silk worms. And increasing factionalism within the Virginia Company only made it more difficult for Yeardley to govern effectively.

Late in August or early in September of 1619 two English ships arrived at Point Comfort carrying Africans stolen from a Portuguese slave ship bound for Vera Cruz, New Spain (present-day Mexico). Yeardley dispatched representatives to meet the second of the two ships, the Treasurer, but it had fled by the time they arrived, probably because the Virginians had refused to sell supplies to its captain. Yeardley may have been concerned that the captain’s letters of marque—paperwork that allowed civilians to attack and plunder Spanish and Portuguese ships—had expired at a time when the king sought better relations with the Spanish. Complicating matters was the fact that the Treasurer was owned in part by Samuel Argall (after whom Yeardley had named his first son) and Lord Robert Rich, earl of Warwick, a wealthy investor in the Virginia Company.

By upsetting Warwick, Yeardley had also upset the alliance between the earl and Sandys, a longtime opponent of piracy and Yeardley’s political patron. In 1620, Sir Thomas Gates, Yeardley’s old commander, joined others in the company who favored a more military-style government in protesting Yeardley’s appointment. Pory defended Yeardley to the Crown, writing that he had invested his own funds in the colony without seeking unnecessary profit, but in 1621 Yeardley resigned. He agreed to remain in office until the arrival, on November 18, 1621, of his successor, Sir Francis Wyatt. He also accepted a position on the governor’s Council.

During his second stay in Virginia, Yeardley became one of the chief landowners in the colony, with a comparably large number of indentured servants and enslaved laborers. At the time of his appointment as governor, the company granted him 1,000 acres on the south side of the James River between present-day Richmond and Williamsburg, a plantation he named Flowerdew Hundred, after his wife. In 1621, Yeardley paid 120 pounds to build a windmill there, the first in British North America, before selling the plantation to Abraham Piersey in 1624. Also in 1621, Esmy Shichans, an Indian leader known as the Laughing King, gave Yeardley between 3,000 and 4,000 acres on the Eastern Shore, and three years later he patented 100 acres that included 7.5 acres in urban Jamestown. In 1627 he obtained 1,000 acres on Mulberry Island, on the north side of the James River about ten miles below Jamestown. He called the new plantation Stanley Hundred, after his wife’s mother, Martha Stanley.

On February 16, 1624, the colony muster recorded Yeardley living in Jamestown with his wife, three children, eight white servants, and two unnamed black women, with other servants and enslaved Africans likely laboring at Yeardley’s other properties. Unlike with the white servants, the names and origins of the black women went unnoted, suggesting they were enslaved and making Yeardley one of the first slaveholders in Virginia. They may have come from one of the two ships that arrived in 1619. By the next year, when another muster was held on January 25, 1625, Yeardley’s holdings had increased substantially. He now claimed thirty-nine laborers, including twenty-four in Jamestown, eight of whom were black. In January 1627, Yeardley received eighteen indentured servants who had once belonged to the Virginia Company, and in October of that year he also received a group of so-called Duty boys, English vagrants who had been shipped to the colony in 1620. They had since served seven years of their indentures and owed seven more. Even while out of office, Yeardley remained involved in colonial matters. On March 22, 1622, the Indians of Tsenacomoco attacked settlements up and down the James River, killing as many as a third of Virginia’s non-native inhabitants, including six people at Flowerdew Hundred. Yeardley led marches against the Pamunkey in 1622 and the Chickahominy in 1623, and in June 1622 explored the Chesapeake Bay in search of safe settlement sites for the survivors of the attack.

In 1624, Governor Wyatt returned to England on personal business, leaving Yeardley to serve briefly as interim governor. At the same time, the factionalism and financial problems of the Virginia Company of London, combined with the shocking setback of the 1622 attack, convinced the Crown to dissolve the company. Yeardley himself sailed for England with his wife, arriving late in September or early in October 1625, to deliver a letter to the Privy Council on conditions in the colony. On March 14, 1626, King Charles I appointed Yeardley the new royal governor. He departed for Virginia a month later with instructions to continue diversifying the economy, this time into fruit, corn, and cattle. Yeardley took up the position in June 1626, but by then his health was beginning to fail. He wrote his will on October 12, 1627, and added a codicil on October 29. He died at Jamestown on November 10, 1627, and was buried in the church there three days later. Lady Temperance Flowerdew Yeardley married the new governor, Francis West, in March 1628 and died in December of that year.

In 2018, archaeologists at Historic Jamestowne and Preservation Virginia announced that they were in the process of excavating a grave in the Jamestown Church they believed to be that of Sir George Yeardley. The Washington Post heralded the discovery, noting that Yeardley “represents two of the chief veins in American history—representative government and slavery, which took root in the same summer, in the same place, in the person of the same man.”